Video analysis is quickly becoming a standard element in golf instruction. It’s common enough that slow-motion replays, along with expert commentary, are a featured segment in many TV golf broadcasts. With the proliferation of digital video cameras and mobile devices, every golfer now has access to this valuable tool. Rokform, an industry leader in mobile device accessories, recently introduced a product that they feel will make taking swing video a little more convenient. They’ve named it the Rokbed v3 Golf Shooter. Though Rokform isn’t a golf-specific company, the Golf Shooter seems to be a logical addition to their line of products. 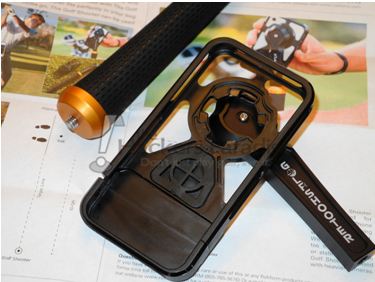 The Rokform Golf Shooter not only eliminates the need for a second person, it allows the player to get a precise, consistent, down the line view of their swing. With all the free and or low cost golf swing Aps available you can have what used to cost thousands of dollars in your bag at all times for under $130! 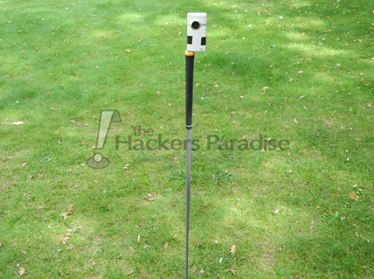 The Golf Shooter came to me in a large cardboard tube. Upon opening the package, I realized that the base of the product was very similar to a typical driver shaft, including a grip, which explained the packaging. The only difference is that the Golf Shooter’s shaft is made of some sort of metal that tapers to a dull point. It’s definitely sturdy and hefty, which is a good thing, since it’s designed to be stuck down into the ground. At the end of the grip is a standard-size screw that should fit most cameras as well as the adaptor for the iPhone 4/4S case that is also included. The case itself is probably worth a review of its own, but I’ll let the mobile phone media handle that. From what I read, the Rokbed v3 case seems to be highly regarded not just as a phone case, but as a system. It has a number of accessories that allow it to be used across many activities including driving, biking, and golfing.

I do want to emphasize a point that Rokform made in the instructions that came with the Golf Shooter. While the screw is likely compatible with many cameras, it’s really only designed to support the weight of something similar to an iPhone or a small digital camera like the Flip. Putting a larger camera on the Golf Shooter is not advisable and could end up causing it to fall over. 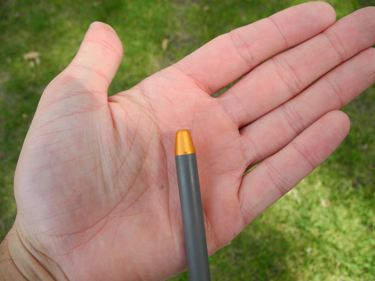 The Golf Shooter exceled when it came to convenience. My previous set-up for video recording utilized a flexible-legged tripod that proved to be frustrating and inconvenient. Aside from being awkward to store, it was difficult to get a good view of exactly what the camera was recording because it was so low to the ground. In addition, it would tip over easily if there was any measurable wind. Conversely, the Golf Shooter stowed easily in my golf bag just like any other club, which made it both portable and easily accessible. I was able to simply plant it in the ground and it was extremely stable, even during some very high winds. I also enjoyed that the camera itself sat about waist-high, since it enabled me to get a good picture of the scene I was trying to capture before hitting the record button.

While I don’t own an iPhone 4/4S, I have a golfing friend that does, so we tested the case using his phone. Installation couldn’t have been any easier and the case seemed sturdy without being too heavy or bulky. In fact, my friend was impressed enough that he wanted to make it his everyday protective case going forward. When it came time to put the Golf Shooter to the test, we quickly clicked it into position on the included aluminum mount and screwed it onto the shaft. The phone can be set at both landscape and portrait angles, depending on which view is desired.

While I can’t speak about long-term durability, I can say that the materials the Golf Shooter is made of give it a somewhat bullet-proof appearance. The shaft itself would be extremely difficult to bend and it was very adept at penetrating the ground. The only caution I really want to communicate is that the hole you create when embedding the Golf Shooter can be enlarged by moving it around. I learned this the hard way after adjusting my field of view when I saw my camera tip over onto the ground. The deeper the shaft was placed into the ground, the more sturdy it became. 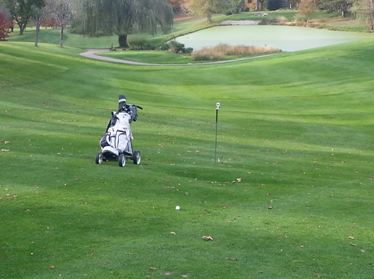 The Golf Shooter’s sturdy construction left me quite impressed. Also, its portability and the convenience of being able to grab and plant it caused me to have a renaissance of sorts with a video camera that had been collecting dust. Video recording had become somewhat of a hassle since I was dealing with an inconvenient tripod, and the Golf Shooter proved to be a breath of fresh air. I was able to easily use it both on the range and the course. The case itself also supports a number of different accessories that fit into an active lifestyle, which makes it a multidimensional product. At $129.00, it is not a low-cost purchase, but the case alone typically retails around $40. I do have a couple suggestions that I feel would make the product a little more attractive, besides a slightly lower price. First of all, it would be nice to see the Golf Shooter available for purchase with a case that fits something other than an iPhone, since Rokform does produce them. Also, those people that use a digital camera would probably appreciate being able to buy it without a phone case included if it saved them $40. For more information, including ordering instructions, you can go to www.rokform.com.