Rule Golf is not a new company, but I will admit that I hadn’t heard the name prior to receiving a package in the mail from them. A little research told me that they are focused primarily on golf accessories like towels, tees, and divot tools. Their vision is that they can help your game by making the minor things we deal with on the course a little easier. I had a chance to review two of their products. Both were towels with somewhat interesting names and characteristics.

Note: The white towel in the picture shows the coarse underside, while the gray towel shows the softer topside.

Rule says this is towel is, “an all-in-one, hybrid towel that combines an absorbent microfiber face with a coarse, brush-like scrubber backing. Designed to simplify golfers’ games and to save time, the patent pending invisibrush™ towel cleans into the grooves of a golf club better than a towel or brush alone.

I’ll admit to a bit of skepticism coming into this review. I’ve had a number of towels on my bag in the last two years, and not many were adept at cleaning dirt from the grooves on my clubs. Even the best were what I’d consider average at most. I’ve used a combination of a damp towel with a steel brush for the last year or so.

I received two different sized towels. The white version was the smaller of the two, and it hung conveniently on my golf bag from a carabiner. The gray towel was the larger professional size and was designed to drape over your bag. Both were soft on the top side and coarse on the underside. The scrubbing side doesn’t really look like it will do much at first glance, thought it is pretty rough to the touch.

The first thing I did with the Invisibrush towel was put it to the test with a wedge that was caked with mud and grass. I wet one half of the towel and used the coarse side to scrub off the mess. You can see the results in the pictures below: 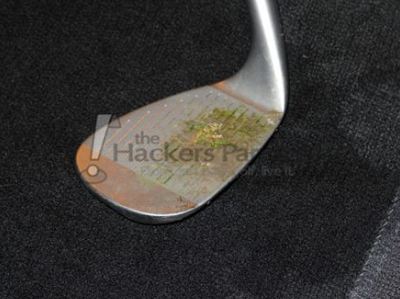 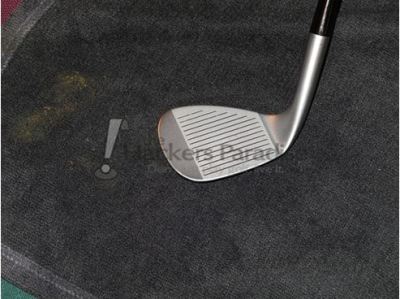 The results in the picture were after a couple minutes of scrubbing, which seemed pretty reasonable when you consider that the grass and mud was over a day old. I think wetting the towel down was the key to getting the club as clean as I did. Though they are hard to see in the pictures, the grooves were cleaned quite well.

I also tested the rulefourteen towels over a couple rounds of golf in some pretty muddy, springtime conditions. On the golf course, cleaning up my clubs was a little quicker since they hadn’t had a chance to dry. Again, I made sure to dampen the towel before I went out. It did dry out after a while, but I just poured some water on it when that happened. I preferred the smaller white towel over the larger towel for convenience. It comes with a small carabiner that clipped to my bag for easy access. That was completely my personal preference as I know some golfers enjoy the larger towels. Having options is never a bad thing.

In all, I was happy with the performance of the towels. They did a nice job of keeping my clubs, including the grooves, clean. A true measure of the performance was that I didn’t have to use my steel brush during the rounds in which I was testing the towels.

The first portable waterproof golf ball cleaner that matches style with function to put clean shots at your fingertips. With its lightweight design and patent pending innovation, ruletwentyone’s interior Bamboo Terry stays wet while its soft-feel, waterproof shell keeps pants dry. So no matter where you go you’ll have a wet towel for clean shots and clear putts. Made in the USA. 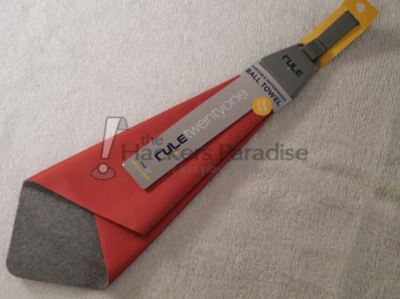 I was pretty impressed with this product from the outset. It really is a neat idea, though maybe a little odd looking. It can best be described as looking very necktie-like. There is an outer shell that is waterproof with a soft fabric liner on the inside. The instructions say to wet the inside, and then you can either clip it to your belt or stick it in your pocket. To clean your golf ball, you just place it inside towel and roll it around until it’s clean.

I had two concerns after seeing the product in person. First, would water drip out from the opening? My experience showed that wasn’t an issue. I did wring it out after pouring the water inside it and it stayed damp for a long time. Second, would it be obstructive or annoying while clipped to my pants? Again, I didn’t experience any negatives here. In fact, I’d say it was just about unnoticeable when clipped to my pants. Unfortunately, it was so unnoticeable that I didn’t notice when it fell off my pants and I ended up losing it. Just a warning that you may want to double check how securely attached it is if you choose not to put it in your pocket.

Fortunately, I did have a chance to clean a number of golf balls with the ruletwentyone towel prior to losing it. It worked as advertised while I had it. I found it very easy to clean my golf ball within a couple seconds. I was really disappointed to have lost it as it proved to be really convenient.

Final Thoughts
I’ve had more towels on my bag than I’ve had drivers in the last 18 months. My feeling is that the rulefourteen towel is as good, or better, than any of them. It really did clean my clubs nicely on the course and it looked good on my bag. Aside from the fact that I lost it too fast, the ruletwentyone ball towel may be one of the cooler accessories I’ve seen in awhile. It was handy and did its job really well. For more information on Rule Golf and their line of accessories, you can head over to www.rulegolf.com. As always, thanks for reading and best of luck on the course this year.