When you first get a look at the Sacks Parente Series 54 putter, it would be impossible to not immediately think copy of the Odyssey Triple Track. Three alignment lines, done in the same color palette and has gained massive popularity over the last couple of years with golfers.

Not only is it not a copy, it was technically first on flat sticks to incorporate the design elements. While that might be the headline, the story should be around the Series 54 itself, which is unlike most mallets on the market today. We explore more of the history of this model and the brand in our previous story here. As more and more people get a chance to explore the entire lineup of Sacks Parente, we wanted to take a quick dive in this THP TV feature.

In the above we not only show off some of the different models that Sacks Parente has to offer, but do some simple tests on the Tech Studio putting green to breakdown the sound and feel of the Series 54.

Do you think a Sacks Parente putting instrument is right for you? Is it the Series 54 featured here or one of their other models? Give us your thoughts below. 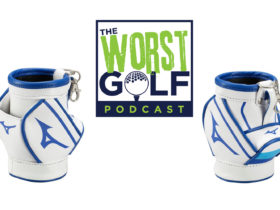