It is one thing to have a giant release from a company, yet another thing entirely for that release to be, well, GIANT!  SeeMore has recently introduced their Giant FGP, an incredible take on the ever popular FGP putter and they are incorporating greater MOI, an easier to square face, and a larger sweet spot for golfers who may struggle with the perfect stroke.  Between the hype surrounding the release around the PGA Show and the interest from tour players, intrigue lead the way as this putter review began. 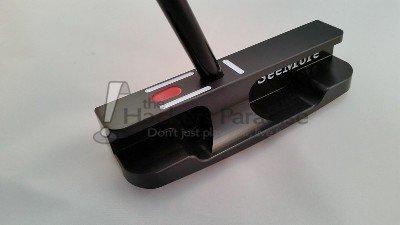 Introducing the new Giant milled FGP. It is 28% larger than an FGP on each dimension. The volume in ccs is 2.5 times a standard milled FGP. The Giant FGP is easier to align the face square to the target line. And it is easier to align the putter square to the golfer’s set up (the major benefit of RST technology), due to the oversize RST alignment markings on the top line of the putter head, and the oversize shaft diameter. And it is more forgiving, with a higher moment of inertia, and extreme heel/toe weighting, with milled stainless steel weights (with milled Copper weights as a special order option providing added feel and stability.) “When putting with the Giant FGP you are able to feel and see the putter work on the correct path with ease,” stated, SPi Director of Instruction and PGA Professional, Ted Gallina, “the larger head maintains the simple benefits of the FGP while enhancing the feeling of Face Balance to Impact – in other words get out of the way and let the putter work for you.”

Benefits of the GIANT:

• Enhanced the feel of keeping the putter on the correct path, “Face Balance at Impact.”

• Retains all the game improvement benefits of the FGP

• Better feedback for setup and stroke 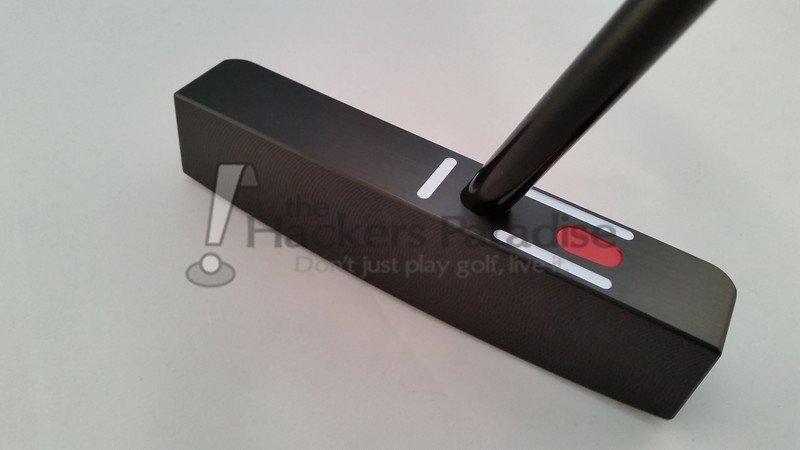 The Giant FGP is truly something to behold out of the box.  After years of that traditional FGP size and shape, it takes some time to really comprehend the sheer volume, yet nothing looks ‘gaudy’ or out of place.  Beyond the name and the sheer size of the headcover, eyes are drawn to the two weights built into the heel and toe section of the putter.  This design has been seen in some of SeeMore’s other releases of late (take a look at their Z series), but expands into the Giant FGP for good reason.  Beyond these notable changes, the Giant FGP represents the FGP name well, maintaining most of the original design elements. 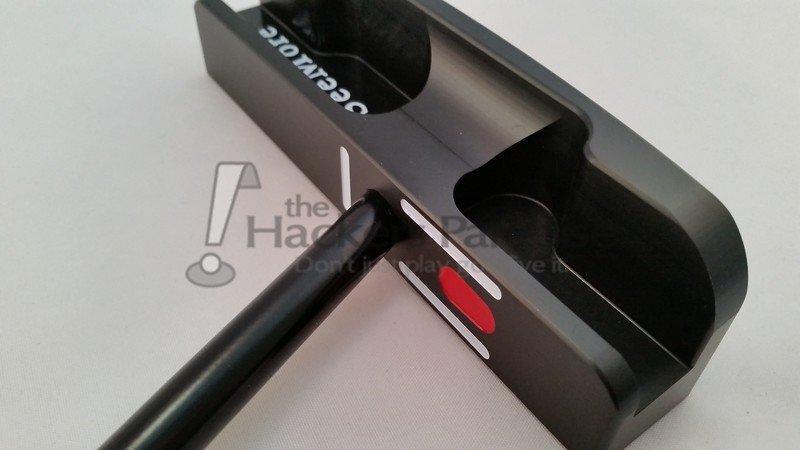 While SeeMore has expanded the size of the Giant FGP, they have done so in a controlled manner.  In fact, they have increased each dimension by 28%, increasing the volume to 2.5 times the size of the standard FGP.  Not only does this increase the size of the head overall, but also the RST and shaft, creating an even larger ‘target’ to align.  It also elevates the size of the face, moving a potential sweet spot closer to the equator of the golf ball.

On first glance, it is understandable to offer a double take at the overall sizing and interpret that with a sense of confusion.  This head is incredibly unique due to the sizing, but only because golfers have a keen idea of what makes sense for a putter of this shape.  The simple truth is that golfers have seen crazier, larger, and more off the wall concepts in recent years, only some of which that have the results to back up the hype. 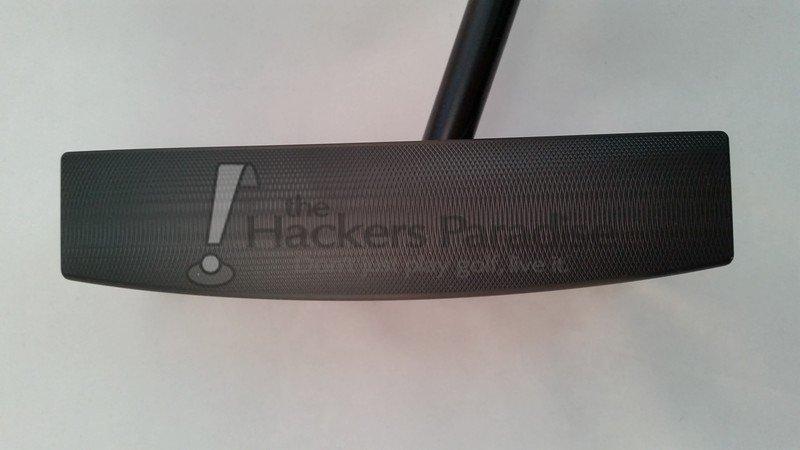 Considering the size, it came as quite a shock to find the SeeMore Giant FGP to weigh only 365 grams.   SeeMore is also providing the Giant FGP in a 400 gram head in a counterbalanced package.  The overall weight seems to measure alongside many of the typical large mallet heads in the putter industry.  Despite the difference in shape to a typical larger mallet, experiences with the Giant FGP showed solid synergy between weight and head balance overall.

This could be one of the better features of the Giant FGP overall.  It is nearly the perfect balance between the standard FGP (offering a metallic click) and the mFGP (which offers a higher pitched contact sound).  On a perfect strike, it produces a very rich click with a small hint of the mFGP side of the spectrum.  Towards the toe and heel, the obvious reduction in perfection is heard with something slightly hollow, and contact low on the face introduces something more akin to a thud in comparison.  The audible variations up and down the face were great representations of quality, providing feedback necessary to improve on the next stroke. 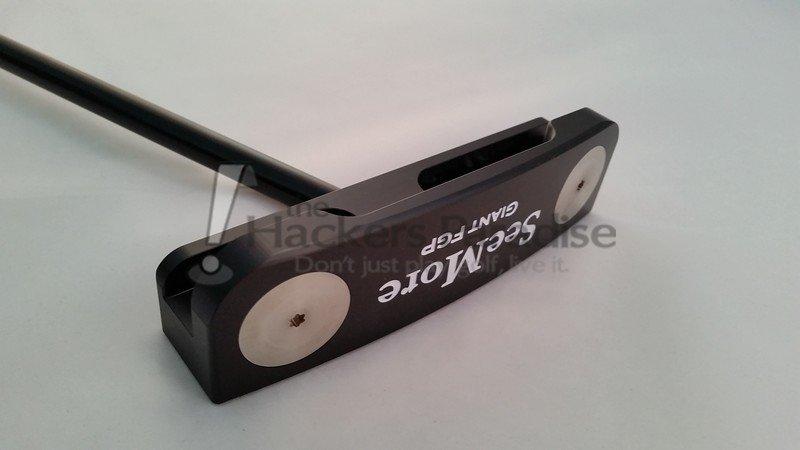 Because of the increase in size, SeeMore was also able to increase some of the elements that are enormously valuable for people who struggle to make perfect contact with the putter.  Thanks to the 28% increase in face size, this also expands the size of the sweet spot, along with the moment of inertia (MOI).  For those unfamiliar with moment of inertia, it relates to the amount of solid contact (and lack of twisting) made at impact.  Putters with overly low MOI require extremely accurate contact in the center of the putter head for results that meet expectations.  Expanding the MOI on the Giant FGP, along with the sweet spot, allows golfers to be less than perfect on their strikes without as large of a reduction on their overall results potential.  It is fascinating, and in testing with the Giant FGP, the putter remains remarkably balanced through contact zone even on subpar strokes. 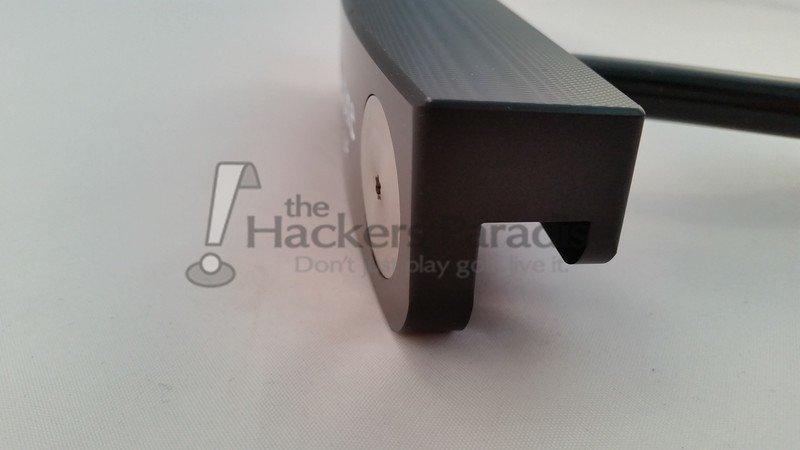 This seems to work hand in hand with the stainless steel weights that are present in the heel and toe section of the putter sole.  Cody Hale, SPi Lead Instructor and Tour Rep, offers another take; “When talking about the balance of the Giant FGP and how it relates to forgiveness – think about tightrope walker, Nik Wallenda.  He uses a longer pole for better balance. A longer blade gives more stability therefore increasing forgiveness and more likely to make a better stroke time after time. It raises the ceiling for all putters.” 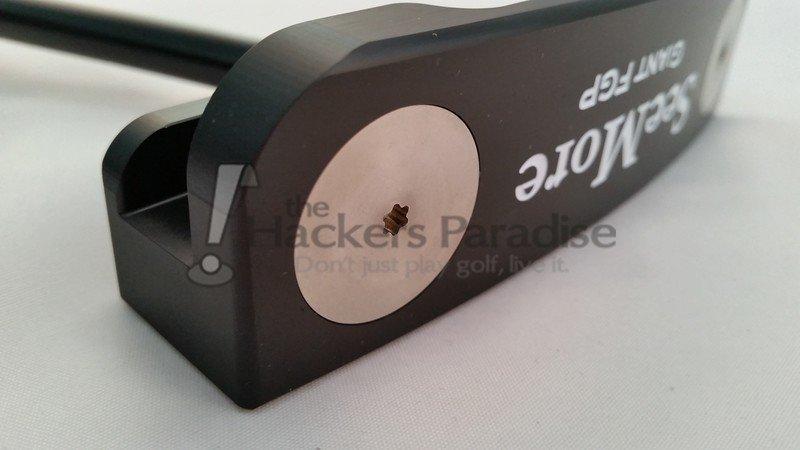 For those unfamiliar with SeeMore and the concept of face balanced at impact, this relates to what the putter head is doing at impact during a stroke at a 70 degree angle.  Regardless of whether the stroke is straight back straight through, on an arc, or pushed to the outside, the natural tendency for the head is to come back through the impact zone square to target.  SeeMore offers a large number of putters that are face balanced at impact, and it is great to see the Giant FGP in this group.

Rifle Scope Technology is the incredibly beneficial element added to SeeMore putters in order to guarantee the alignment of the putter head is on target.  The name lends itself to the concept of aiming the scope of a rifle, aligning a gun to the intended target.  On the Giant FGP, the RST element is larger, however that is accommodated by a wider putter shaft.  Testing confirmed prior experiences with SeeMore putters, where not only hiding the red dot, but perfectly aligning the white outer lines of RST to the shaft creates consistent face alignment on every shot.  This is highly valuable both on the course and on the putting green in practice. 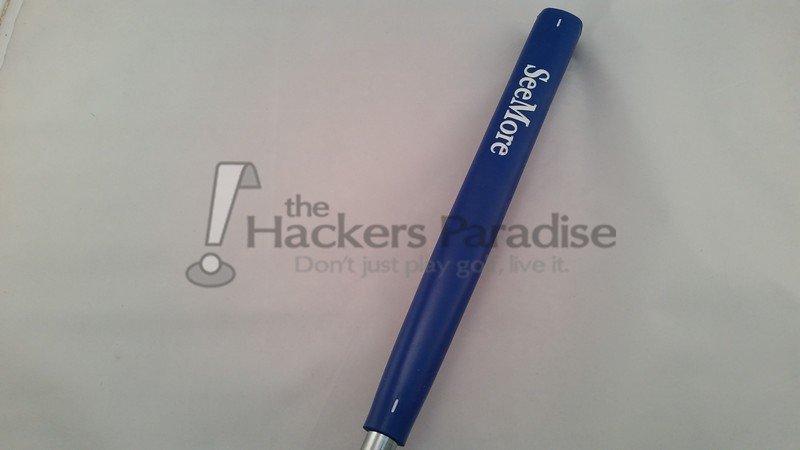 The highest value of the overall Giant FGP putter found in testing was putts in the troublesome one to ten foot range.  Distances that may not promote a great deal of power needed to get the ball to the hole, causing issues with imparting a good, smooth stroke on the ball.  Time after time the balance of the Giant FGP made it extremely easy to create fluid strokes in this distance, reducing the potential to push or pull the putter out of proper stroke alignment.

The quality of the stroke deteriorated slightly as the distance to the hole increased, however as putting length increases, the likelihood of stroke ease typically reduces quickly.  Lag putting was quite easy to accommodate on fast greens, while there seemed to be some struggle with the weighting on notably slower greens. 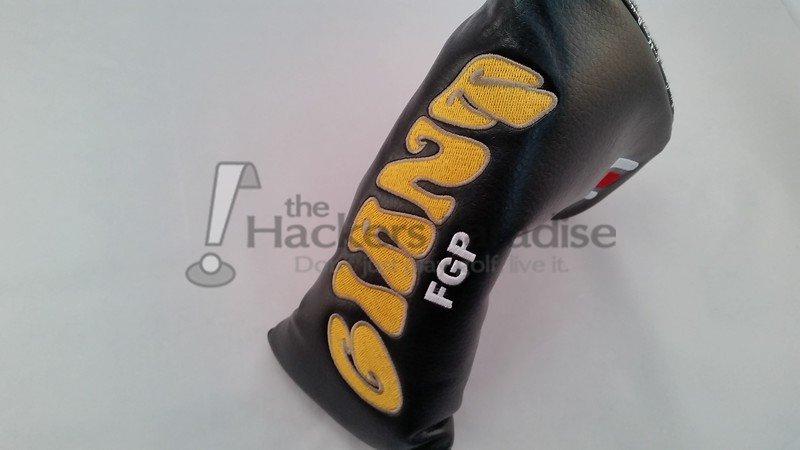 The reality of the Giant FGP takes time.  One stroke to understand and implement the technological value, one round to get comfortable with the size of the head, and one week for some to realize the results will speak much louder than the head does.  SeeMore has offered an eye opening look at what putter profiles can be, and it comes with ‘huge’ potential.  For more information on the SeeMore Giant FGP, visit www.SeeMore.com.