For strong ball strikers, there seems to be a hardened inclination for compact iron designs with limited launch support, workability and style.  With this type of design, it is extremely hard to build an identity with an iron due to the nature of the muscle back being so compact.  For Srixon, not only have they managed to create an identity with the Z 945 iron, they’ve done so in a way that marries their 545 and 745 counterparts.

Experience the ultimate in ball-striking with Srixon Z 945 irons. The muscle back design features a slimmer topline and more compact shape for a pleasing traditional look that encourages workability and gives confidence. 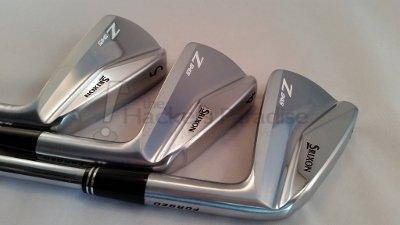 There is an unmistakable design element that draws the z 545, 745, and 945 irons together in the latest release from Srixon.  A sharp yet elegant triangular design is present on the back of the iron, providing confidence for golfers that striking the ball well will produce ample feedback with considerable material in that location.  Moving to the finish, a softer chrome produces that muscle back presentation without having a completely mirrored finish.  The package is complete with the pairing of the low launching, low torque DG S300 shaft, and Golf Pride New Decade Multi Compound grip.  This combination will promote truly stable shaft feedback through the hands, with a responsive grip that can handle every condition of golf.

From Srixon: FORGED – The Srixon Z 945 irons are forged from the highest quality, softest 1020 carbon steel.  With a lower carbon content compared to many key competitors, the Z series irons are high-strength while also exceptionally responsive and smooth at impact. 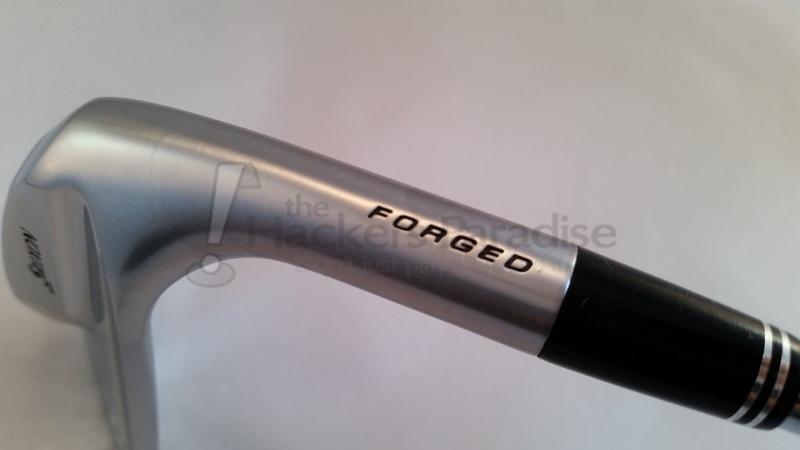 The responsiveness in sound and vibration from a muscle back iron is rarely rivaled.  For the Srixon Z 945 irons, feedback is met with high marks on a majority of swing types.  Perfect contact returns a very clear and flush sound, with the ball feeling something akin to putty on the face of the iron.  It did not seem to be overly ‘crisp’ or ‘sharp’ but rather full bodied and audible at a level where quality contact was obvious.  There is some marginal flexibility laterally on the face, more so in the direction of the heel rather than the toe area.

Moving to less than ideal contact, the audible response from the Z 945 irons change dramatically.  Shots making contact lower on the iron face generate a more muted thud, with vibrations into the hands providing instant feedback on strike quality.  Strikes moving upwards on the head (a sample would be teeing the ball too high and striking above the center equator of the face) generated a metallic clunk, despite performance retaining 90-95% of anticipated distance.  Strikes moving to the toe of the face generate a reasonably solid sound similar to center face contact with less of that ‘putty’ feedback.  In the hands, the twist of the iron face is quite clear at that contact position.

From Srixon: Tour V.T. Sole – To enhance turf interaction and trajectory control, Srixon Z 945 irons feature the newly developed Tour V.T. sole.  By increasing leading bounce and decreasing trailing bounce, a “V” is created in the sole profile that has been proven to reduce turf resistance and tighter shot dispersion. 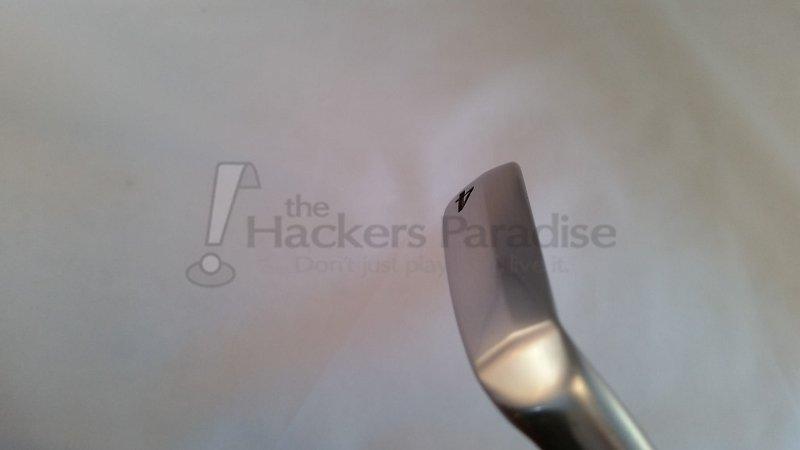 While Srixon considers the Z 945 irons as “tour” level, the V.T. Sole design may very well expand that handicap spectrum more into the low single digits as well.  Unique to many of the muscle back irons present on the market today, the V.T. Sole technology accommodates situations where players strike the ground too aggressively, saving fairways from a massive divot.

Testing in firm conditions gave the presentation of the sole interaction with the turf to be limited, driving small divots in a majority of instances.  Moving to an average grass firmness, there is a definitive benefit with the Z 945 irons not eagerly cutting through the turf, only taking mid-range and reasonable divots on quality strikes.  Striking down too much will still produce poor results overall, this design seems to simply accommodate those players who would prefer to have an iron that did not aggressively seek out dirt during a swing.

From Srixon: Double Laser Milling – Milling on the face adds surface roughness for additional spin and trajectory control in all conditions. 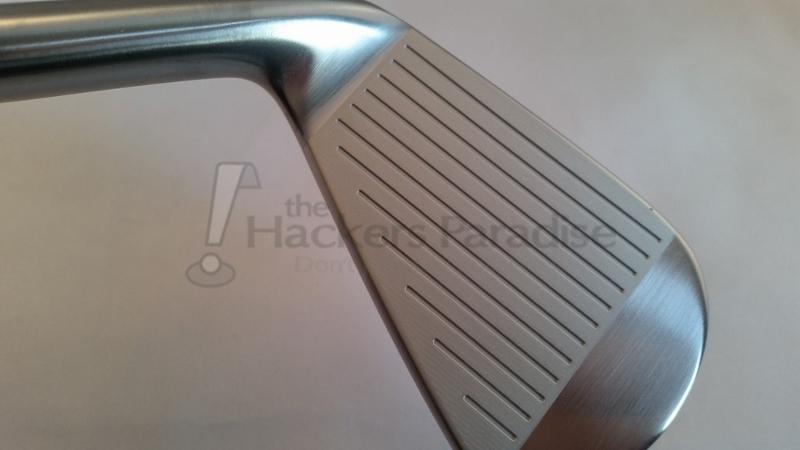 Across the face of each Z 945 iron, subtle mill marks can be found.  These are suggested to improve the surface tension, promoting better spin and flight control for golfers.  During testing, there was an adequate amount of spin off all irons, including some mid to short irons producing enough spin on green approach to spin backwards a number of feet.  In wetter conditions, the most common result of an iron strike would be a large crater-esque divot with very little post-contact action from the ball.

As the Srixon Z 945 irons are a muscle back design, there was little surprise to see how well the irons managed the overall ability to work the ball up and down as well as left and right.  Unlike many iron offerings that have flight increasing technology, it seemed like the flight of the Z 945 irons were heavily dictated by swing.  This made for great experiences in the windier conditions that encouraged lower launching flight profile, however it also made the gapping between irons a bit less consistent due to swing differences between clubs.  The latter aspect is entirely player driven.

While Srixon does not directly discuss their triangular design on the back on the club, it certainly seemed worthy to speak on the shaping, and where it may be beneficial.  When reviewing the location of the material behind the face, there is a very obvious intention to have a majority of the steel behind the center (and partially the hosel side of center).  By doing this, Srixon has generated a very solid feedback generating iron head on perfect strikes, which likely favors the better ball strikers. 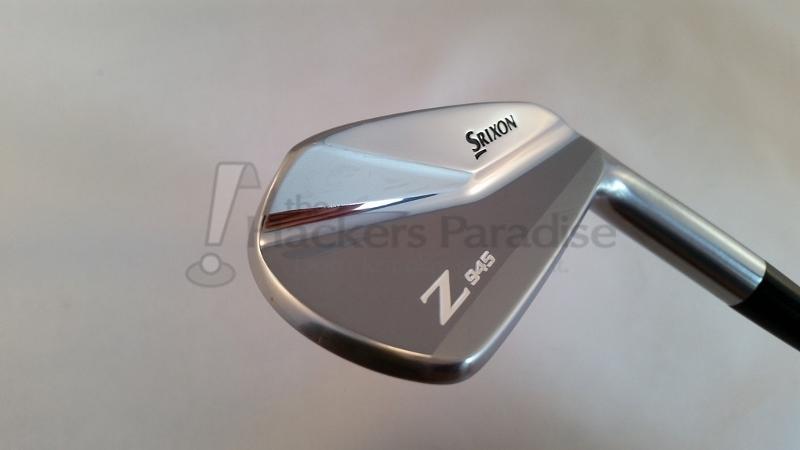 This does promote some concern that attention was not taken to support toe side strikes, and that simply isn’t the case.  Not only did Srixon incorporate tungsten weighting into the longer irons (6, 5, 4, 3), the groove line ends before the reduction of steel behind the contact area would create a great deal of feedback loss.  Rather than catering to a single swing type, the Srixon Z 945 seems to adapt to the majority of better ball strikers without the cost of an unbalanced iron offering. 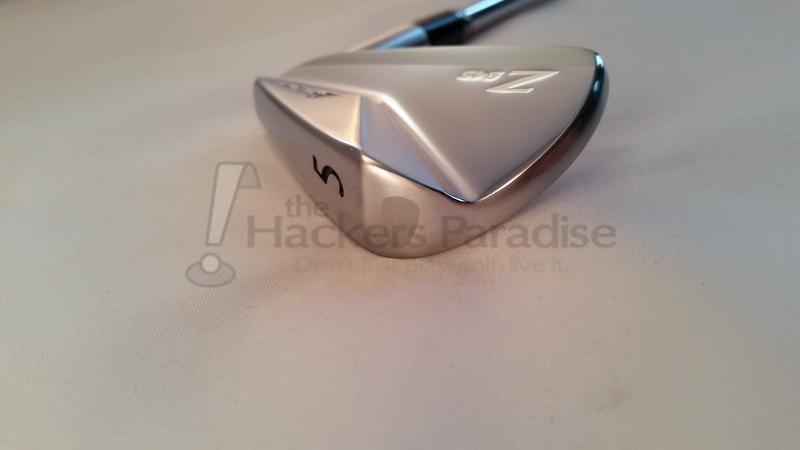 Testing the Srixon Z 945 irons as a low handicap golfer proved to be a reminder of what irons can produce when removed of the launch, spin, and forgiveness aspects of game improvement irons that are ever popular right now.  It would be inaccurate to suggest the Z 945 is an overly forgiving club, however it does seem as though Srixon has begun widening the player potential with elements like the tungsten toe weighting and V.T. Sole.  If you are a golfer that enjoys generating unique shot shapes regularly, and enjoys the slim profile and feedback offered by a muscle back, the Srixon Z 945 irons may well be the perfect fit.  For more info, visit www.Srixon.com.