If you aren’t evolving, you are falling behind. Srixon Golf has always seemed to take this to heart, especially when it comes to their flagship irons the 5-Series and 7-Series. Well, after much anticipation, they are ready to formally introduce the next generation and here is our Srixon ZX5 and ZX7 irons review.

Not only does THP have a rundown of the design features of each in this article, but we were also able to spend time with the 7i and PW from each set as well.

Put any worries to rest when it comes to Srixon altering the formula of their Z-Series irons. There may be some impressive technology changes on board as well as a naming change, but the looks, feel, and flat out filthy performance still stands tall in both the ZX5 and ZX7 irons.

Srixon has hit homerun after homerun with their Z-Series irons the past three releases, the 45, 65, and 85 models have been nothing short of stellar and cemented them as an iron company. This year, the name is changing by shortening the naming mechanism to simply ZX5 and ZX7, but the amount of design that has gone into these is greater than any iron Srixon has ever produced.

The basis around the ZX5 and ZX7 this year is best explained by the tag line that Srixon has used in their release, “Created with human intelligence but perfected by the artificial kind.” Now, yes, “Artificial Intelligence” is without any doubt a “hot” discussion point across the industry, but while others are making it all about the computer, Srixon is making sure to let it be known that the craftsmanship is where it all starts with the new ZX irons, and it’s the A.I. that is working with it to take both series of irons to a whole new level.

While each of the iron series have always been differentiated by most based on size and profile, this year they are also each touting some design traits that are unique to each set. As I was fortunate enough to get the 7i and PW in hand for the ZX5 and ZX7 irons and work with them, it makes sense to dive into each individually.

Getting it out of the way, yes, the ZX5 remains the “bigger” of the two iron sets just as has been the case in previous iterations, it’s a club that walks a blended line between a players design and a more game improvement setup.

The ZX5 is still a forged iron and offers a sound/feel that is soft yet quick, at impact it is a crisp feedback that isn’t quite as plush as a pure one-piece cavity back, but it is closer than ever. The look at address is so surprising as both the offset and topline are very tame and it keeps that same heel to toe length that even some of the pickiest out there will get along with.

The sole does have much more width to it than the ZX7, but the previously mentioned heel to toe length of the blade makes it less of a concern. Not to mention, the ZX5 does feature Srixon’s Tour V.T. Sole that I continue to believe is the greatest iron sole grind of all time. In my workout of the 7i and PW on the course that opinion was nothing but solidified as it just responds so well from any lie I could throw at it, and honestly, it makes the wider sole insanely effective. But, this year something special is happening when it comes to the V.T. Sole and it is the return of the sole notches last seen on the 545/745 irons and arguably a big reason that so many of those sets remain in bags, the notches offer relief and thus more versatility which is never a bad thing.

The ZX5 also feature progressive grooves through the set which applies to a SUP10 face that is joined to the 1020 carbon steel frame along with tungsten in the toe of the longer irons. All of these things seek to improve flight, forgiveness, and consistency, but the real story is something called “Mainframe”.  This name represents Srixon designers setting the parameters to create their fastest irons on every shot and ran thousands upon thousands of simulations to come up with the pattern that is milled onto the back of each ZX5 face. The variable thickness pattern also features grooves and shapes to make what Srixon believes is an iron that is faster on every single strike, misses included.

Is it though? Without a doubt.

I worked out the 7i and PW of the ZX5 head to head with their sibling the ZX7 and the data recorded on the Foresight GC2 following this section tells the story, these are fast. For me, they were noticeably faster than the ZX7 and misses were at times laughable with how they kept speed comparably.

While you will see in the numbers the spin is also a bit on the low side, this is in part to having to record my data indoors as well as the fact that it has always been the case for me with the 5-Series of irons from Srixon. What stood out in the data and on the course though was the height and descent angle I was able to hit these, both more significant for me than with the 585’s, making my personal spin numbers a non-issue.

Bottom line, there is some serious firepower here. Paired with the Nippon MODUS3 Tour105 shafts is a setup that is smooth and forgiving while also being shockingly long.

The 7-Series has constantly been one of the most gorgeous players cavity designs on the market with each release, and though the new ZX7 is a bit more modern looking with the angles and cavity, it holds true to its lineage and makes for a jaw dropping look in hand and in bag. A thin topline, minimal offset, and a sole that even the most demanding ball striker would be impressed with, the ZX7 is a stunner.

Fully forged out of 1020 Carbon Steel, these are true players irons. Though some might initially think that the cavity is a bit too busy, there is a rhyme and a reason for the added angles and mass placement this time around. The goal with an iron like this is always to add playability while maintaining the look/profile that so many demand, the different angles on the back of the club allowed Srixon to not only move some mass to the perimeter, but also place some directly behind the sweet spot in order to increase MOI while creating more feel.

Through impact, these offered me the feedback in sound/feel that I expected having spent time with every single 7-Series iron from Srixon. The sensation through contact on decent to well struck shots is one that walks the line between sharp and dull, it’s a blend that will be nearly impossible for golfers to find a detraction about. The overall playability for those who enjoy players irons is what stood out most in my time with the ZX7. With the progressive grooves and Tour V.T. Sole with the return of the sole notches, the golfer who demands versatility and precision in anylie will have all they can handle with these. There was no shot that I threw at them on the course that they couldn’t handle, it’s all about if it is a profile you are comfortable and confident in.

Like the ZX5, I also put the two clubs to work on the Foresight GC2 launch monitor and that data is shown. As you will see, the launch, peak, and speed were particularly good for me in both. While the spin dipped a bit recording data indoors, the Nippon MODUS3 Tour120 made for a pairing that just added to the feel and consistency of the heads.

Where the ZX5 offers firepower, the ZX7 rests on precision, but that doesn’t mean they each don’t also have some that the other does. In fact, they blend so well that Srixon is all in on the combo set trend offering any combination you could possibly want, including adding in the new ZX Utility to the mix.

Much anticipation has surrounded the release of the Srixon ZX5 and ZX7 irons review, and Srixon is not letting anyone down with what they have created. It’s easy to sit here and write that they impressed me, but they went well beyond that at times with how well they each hit their specific segment while also complimenting one another. This is without a doubt going to be yet another big release for Srixon. 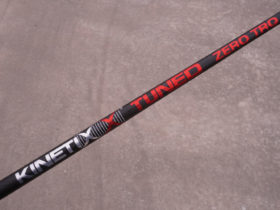