The reigning emperor of “no-taper” putter grips returns with a refreshed lineup, including the only dedicated Claw Grip design on the market. Focus on texture and feel reigns supreme here, while the companies color selections will leave some wanting. 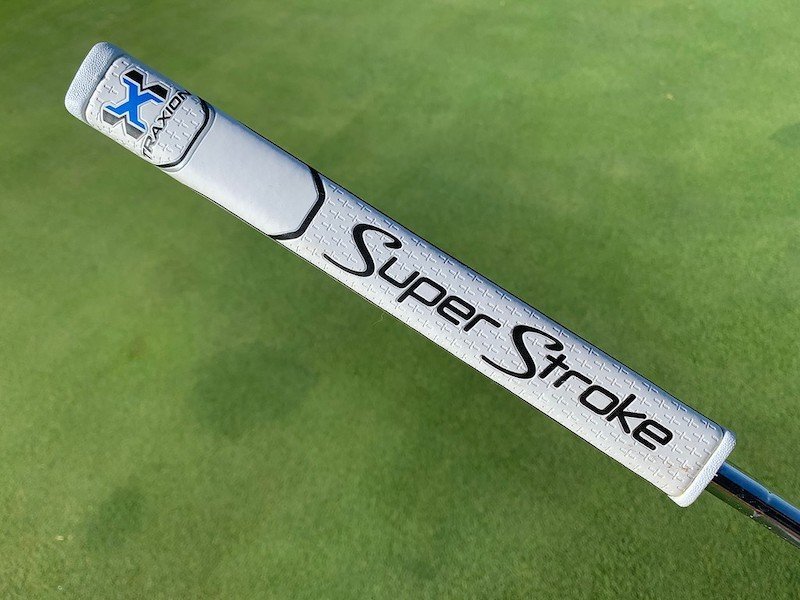 The first thing to get into is what makes the new “Traxion” lineup from Super Stroke different than its previous iterations, other than the predominantly white aesthetic (including the end cap, which we will get into in a bit).

The Traxion putter grip line consists of 15 different shapes, all of which are still utilizing the “No Taper Technology” which put them on the map and remains the predominant reason so many who use Super Stroke grips enjoy them so much. Beyond that though, there are some changes worth noting. 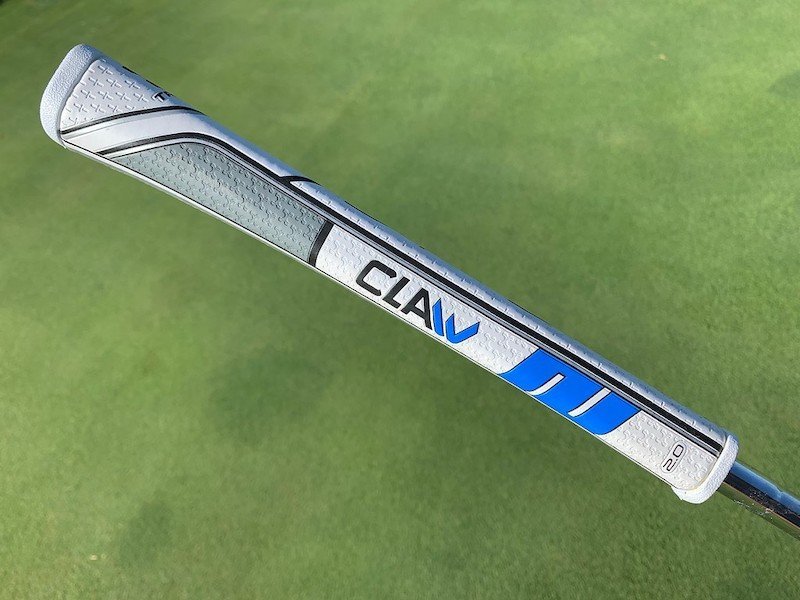 First and foremost, “Traxion Control”. Essentially, this is the design and texture of the outer sleeve of the grip. Utilizing x-shaped treads, more surface texture naturally seeks to increase the feel of the grip. Specifically, Super Stroke has put this Traxion texture into the regions of each grip specific to where the most sensitive portions of the hands are typically placed onto them. It’s at its root a simple concept, more texture means more feel to the hands, and more feel to the hands should mean more worthwhile feedback.

Also, as the trend in grips (swing grips in particular) has been the return of the “reminder”, Super Stroke has honestly always had that with the stitching on the underside of each of their grips. But, to really showcase it, they are calling it “Spyne Technology” and increasing how much it protrudes to make it even more noticeable. Pretty ingenious really as it gets them in with one of the big trends while not really being a change from what they have always done. 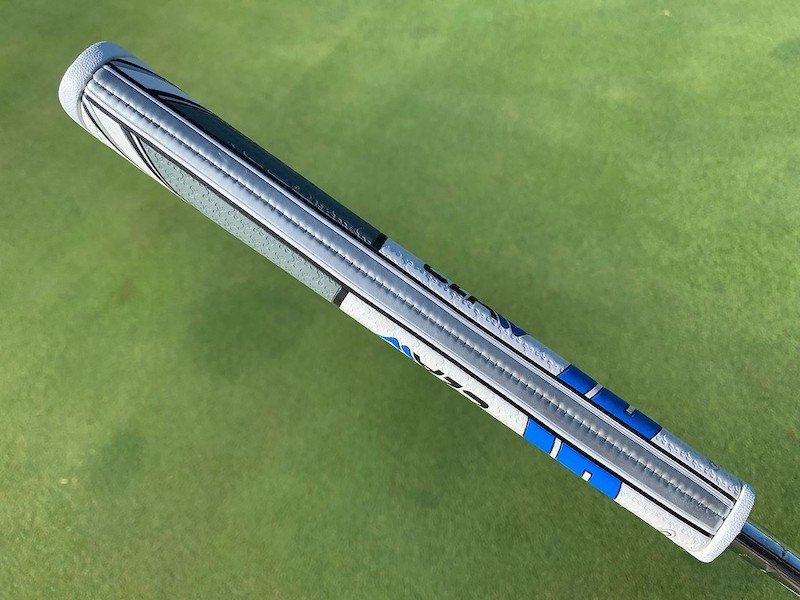 The last part to mention is that the weight port which has been present in the past few Super Stroke releases is again present, but redesigned. With 25g, 50g, and 75g weights available, the grips will also be backwards compatible to all of the older CounterCore grips which will make long time users who like to counterbalance their grips pleased.

For the review I worked with the Traxion Claw 2.0 grip in the White/Blue/Grey color pattern, it was installed and put into play for over 20 rounds of golf as well as putting practices. Additionally, to test the designs entireintent, I did in fact use it exclusively with a claw putting technique.

The Claw design is truly unique, to my knowledge it is the only grip 100% designed for claw users on the market, and as such the shape is unlike anything else in the Traxion lineup. The upper section of the grip has a traditional pistol shape to fit comfortably in the upper hand while the lower section is very rectangular, with three flat sides and only a small bulge on the back due to the “Spyne” of the grip. The whole key is that rectangular lower section as the flat sides make for an extremely comfortable and consistent “claw” or “pencil” hand placement onto the grip. 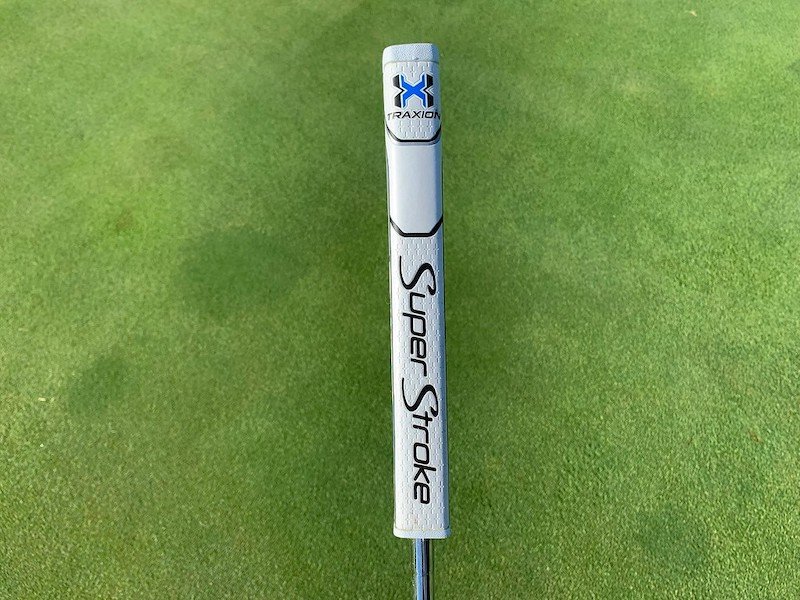 I came to legitimately enjoy using the claw grip during my rounds because of how naturally comfortable and stable the shape is with this grip. Additionally, the Super Stroke feel has always been nice in the hands, enough give to be comfortable but not overly soft. Naturally, I tried putting with my traditional style grip some as well, but that just was not as comfortable as the claw with this shape in the lower hand.

I would be remiss, however, to not mention the wear and tear the grip saw during its continued use. Historically, wear has always been my main issue when it comes to Super Stroke grips, I love the No Taper designs, but while feel and texture is the plus side to using a multi-layer grip with the thin, tacky, outer casing, the con is that they do show wear rather quickly. With the Traxion design the newer, thicker, endcap is in play and that really helped the in-and-out of the bag wear and tear. There was some scuffing but that is expected. 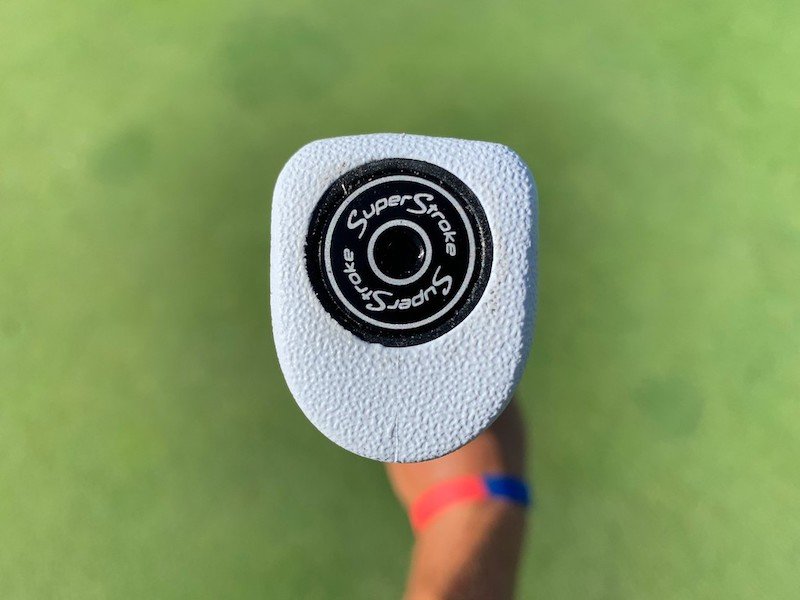 The big issue in my opinion was the decision to produce a predominantly all white putter grip as this is the club that is themost in and out of the bag while also being put into hand(s) fresh out of sweaty gloves and potentially then laid on the ground on top of it. The Claw 2.0 showed a lotof dirt and grime in my testing, and while a gentle scrubbing and magic eraser helped, it still showed. The reason for this color selection, I know, is its vibrance on TV when in the hands of Tour players, but it would be nice to see the return of some more non-white dominant options as soon as possible because for me at least, it takes the sheen off (pun intended) of an otherwise verygood lineup release.