About one year ago THP had the opportunity to review what could be considered the originator of the mobile swing analysis devices, the Swingbyte. Following the initial amazement of the Swingbyte, there was nothing short of an avalanche of similar devices flooding this newly founded area.  Perhaps however, the benefit to being part of something at the beginning is that it provides more time to refine a product while others are just beginning. Enter the Swingbyte 2.0 for both iOS and Android devices.

Swingbyte was founded in 2010 by three University of Chicago Booth School of Business colleagues, Alex Pedenko, Brian Payne and Nathan Wojtkiewicz. Frustrated with the challenge of learning golf on his own, tech expert Alex sought a simple and affordable technology-based solution for this centuries old endeavor. After two years of work with former golf pro Brian and operations expert Nathan, Swingbyte was released this spring to widespread acclaim, including Golf Digest naming Swingbyte one of the “12 Coolest Items” at the PGA Merchandise Show.

Attach swingbyte easily to any club

Record your swings via bluetooth

Tap Add Swings in the app and swing away! Swingbyte will automatically record individual swings for you to review in real-time or later on.

Having read Jake’s review of the original Swingbyte I believed I had a pretty solid grasp on what I would be seeing upon the arrival of the 2.0 from THP Headquarters, but I was wrong. Upon initial inspection of the packaging I quickly realized that this was not just an application upgrade, it was an upgrade of the actual device as well. 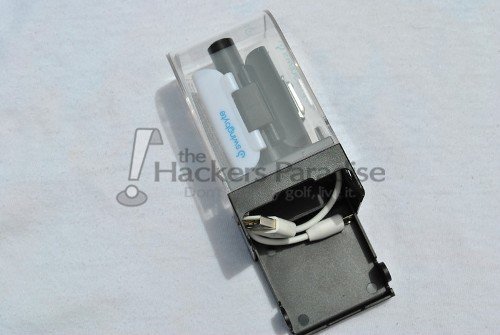 Inside the sleek packaging sat an evolution of the original Swingbyte device that involved a tremendous amount of R&D, not just for performance, but also aesthetics. The 2.0 is nothing short of sleek and impressive in hand. Obviously, aesthetics are a big part of a product, but the performance is what matters the most. 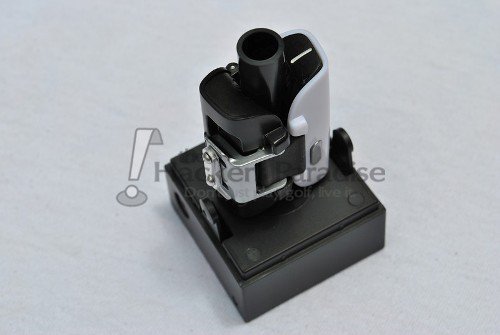 Setup and Ease of Use

Having reviewed many swing analysis devices I can say that the setup with Swingbyte was the easiest for me. Not necessarily because it involves fewer steps, but rather because immediately after you download the app (I used the iOS app on my iPhone 5) and open it, the app itself walks you through a step by step of setup instructions, making it highly improbably you are going to be able to mess it up. 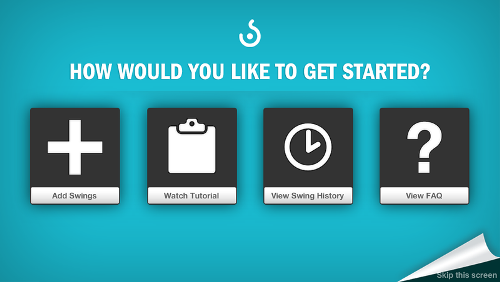 Outside of following the initial installation steps to mount the device, the only other thing you need to do is hold the power button and turn on your Bluetooth in settings. In the app itself you have the ability to set up your bag (including length, loft, and flex – highly recommended to do so for accuracy), select your club, and start swinging. One nice feature is that the device will actually notify you that it needs to auto calibrate, you simply lean the club against something so that it is still and tap ‘ok’, the app does all the rest. The swing recording itself is among the most streamlined I have used, as upon the completion of a swing you get a sound notifying if it was recorded or not and the data appears on the screen.  There is no need to tap ‘record’ every single swing. 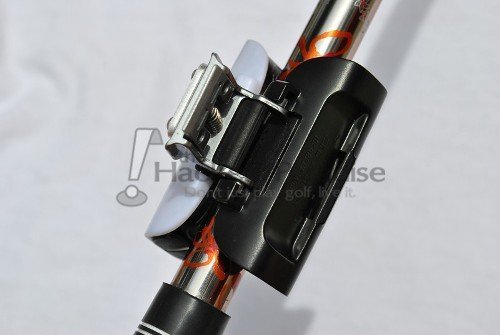 One thing about the aesthetic evolution from 1.0 to 2.0 that I want to touch on specifically is the actual clamping mechanism. In the original Swingbyte, it was held on essentially by a rubber strap and there were recorded instances of the device slipping and even the strap breaking. With the 2.0 it is clear that the company wanted to end those issues once and for all. 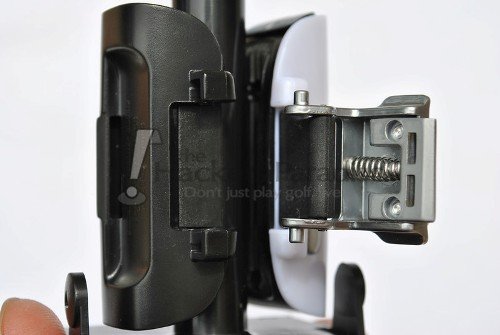 The Swingbyte 2.0 has the most heavy-duty clamping mechanism that I have seen yet and I honestly didn’t think anyone could have improved on what one of the Swingbyte’s competitors had done. The new clamp possesses a defined gripping area on the inside of the bracket that in coordination with a heavy-duty rubber hinge and a spring loaded clasp mechanism, ensures that the device will fit snugly on any shaft. I really like that rather than looking for a simple and quick solution the company instead opted for the solution that would end the prior issues for good. You don’t see that very often today. 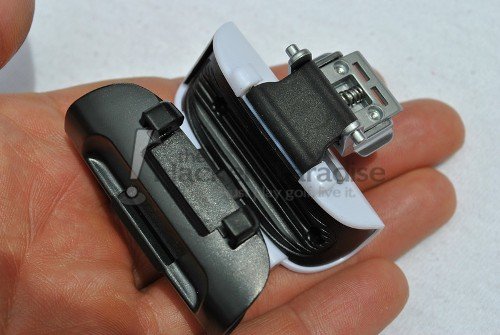 Although the streamlined setup and the clamping mechanism are nice features, it all comes down to the data. After all, the point of devices like this are to improve one’s golf swing by actually seeing and understanding what they are doing. After my time with the Swingbyte I believe it is much more to the point than devices I have previously reviewed. By this I mean that although it does offer varied features, rather than having tons of bells and whistles it is clear that the company wants to master what they do first and foremost. It is for this fact that the Swingbyte 2.0’s swing data is so streamlined and easy to digest. 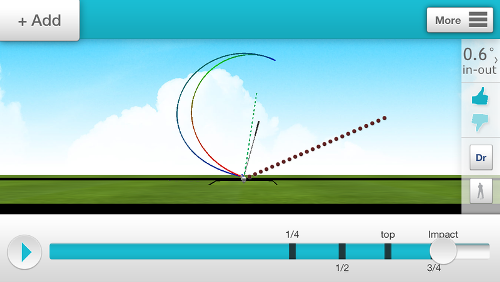 The Swingbyte app interface is different than most in that it doesn’t feature a 3D rendering of a golfer, but instead it is all about the club path itself. Illustrated on the screen of each recorded swing are the setup angle, backswing path, downswing path, and clubhead direction at impact. The swing “recording” can be played back by the user in full speed and also different points in the swing (1/4, 1/2, top, 3/4, and Impact). Additionally you have the option of selecting different viewpoints to see your swing from (3D, Overhead, Face On, Down the Line) and manipulating them as far as zoom and manually adjusting the angles.

Beyond the actual swing recording a plethora of other swing data from impact and address is available with the tap of a finger. In fact, the data available is nothing short of staggering at first, yet in the way it is presented it becomes easy to digest. The user has the ability to view swing speed, tempo, face to address/path, club path, lie angle, club loft, attack angle, shaft lean, face at address, and target line. 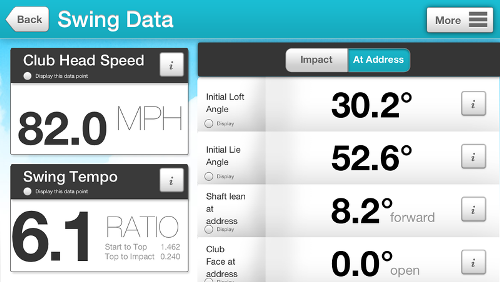 Lots of data is a great thing, if it is accurate. After putting pretty much every type of swing I could come up with on the device during my range sessions,it was clear that my efforts to prove the numbers wrong came up short. From club path to ball flight and everything in between the Swingbyte 2.0 was putting onto the screen what I was seeing. Now, it is good to keep in mind that what we consider to be “straight” to the naked eye is actually going to have some movement on it and the Swingbyte even picked up on that. Most impressive for me though is the fact that from a swing speed perspective this is the most accurate device I have reviewed so far. Compared to what I usually see on launch monitors recently, the Swingbyte was within 1-2 MPH swing after swing – definitely impressive to see. 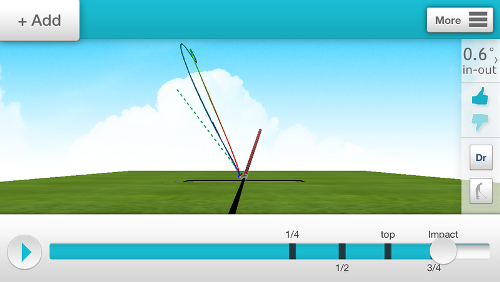 Another feature that I really want to touch on is the online analytics potions of the Swingbyte 2.0, as it presents a very cool added dimension to all of this data you can record at the range or on the course. By going to my.swingbyte.com you have access to your data from a computer online. The cool thing here is that not only can I view all of my swing data from the website, but I can actually track overall usage and trends in my swings. Plus, you have the ability to earn “badges” if you achieve certain feats (one is a SS over 120…I wish), which is surprisingly addictive. The coolest part though is the ability to use the provided swing URL or even Facebook/Twitter to share your swing with friends or even your instructor. All told, it is just like the app itself, incredibly clean and easy to navigate.

There are clearly a lot of different swing analysis devises out there today and that number is only going to increase. With all of the options out there it is incredibly impressive to see an originator in the field still improving and evolving to help people become better golfers. For me, the bottom line with the Swingbyte 2.0 is that it works, and in fact, it works impressively well. There is no doubt to be that the company has taken their weaknesses and attempted to not only correct them, but mold them into strengths. There are certainly swing analysis devices out there with more bells and whistles, but for the golfer looking for easily digestible information that can help them improve their golf swing the Swingbyte 2.0 might be incredibly hard to beat.

The Swingbyte 2.0 has an MSRP of 149.00. Be sure to check out their website at http://www.swingbyte.com for more information as well.