By now most of us have had an opportunity to hit balls on a launch monitor or maybe even had a chance to see some really cool computer animated analysis of their swing. The information you can gather from this type of technology is absolutely priceless. Everything your golf club is doing at any point in your swing is displayed right there on the computer screen. There is however one drawback to all of this, in order to get access to it you have to pay, and pay a pretty steep price most of the time. New in 2012 is a device called SwingByte, the SwingByte is a small device that is designed to get all of this valuable data but without having to pay expensive fees for instructors utilizing the technology. Let’s check it out. 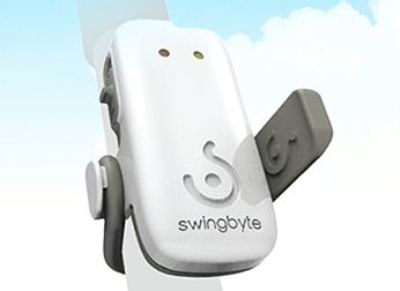 Swingbyte was founded in 2010 by three University of Chicago Booth School of Business colleagues, Alex Pedenko, Brian Payne and Nathan Wojtkiewicz. Frustrated with the challenge of learning golf on his own, tech expert Alex sought a simple and affordable technology-based solution for this centuries old endeavor. After two years of work with former golf pro Brian and operations expert Nathan, Swingbyte was released this spring to widespread acclaim, including Golf Digest naming Swingbyte one of the “12 Coolest Items” at the 2012 PGA Merchandise Show.

Swingbyte is a patent-pending 3-D golf swing analyzer that helps golfers of all skill levels to improve their game in real-time, right on their smartphone or tablet. Swingbyte instantly captures key metrics from a golf swing and wirelessly transmits the information and a visual representation of the swing to a golfer’s Apple or Android mobile device.

Before I get into the data I was able to obtain from the SwingByte let me start with talking about ease of use. Immediately after receiving the package I had the device powered on and the minute I enabled Bluetooth on my iPhone things were communicating and I was ready to start taking swings. I was happy with how quickly and easily the setup was, because I am not someone who likes to read instructions. I like it when things just work like I think they should and initial setup of the device is a breeze. 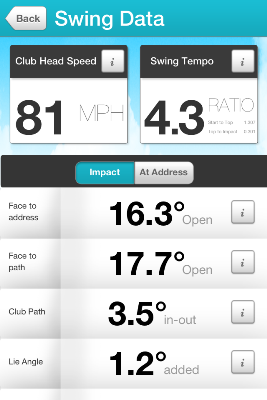 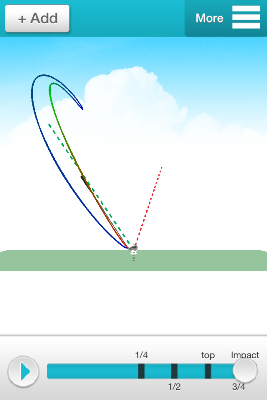 Ok so we’re setup and taking swings, just to let you know the type of data that is being displayed here let me list a few. At address you can find out the club loft, lie and face angles. Perhaps even more valuable, at impact the SwingByte will show you your club head speed, club loft, lie, face, angle of attack, club path and tempo. Throughout the swing you get data such as linear acceleration and plane angle. Basically anything you could imagine wanting to know about the position of your club is provided and all in easy to read layouts.

All of this data can be a bit of information overload but the way SwingByte displays the swing on your mobile device it’s actually all pretty easy to follow along and to understand what you’re looking at. As you swing the club with the SwingByte collecting data it keeps a swing history that is easy to access and view as you are working through some swings and tracking certain areas of the swing for improvements. The SwingByte App (free download on iOS or Andriod) comes setup with a standard golf bag of club specs, but I recommend going through the default settings and making sure everything you use is in there and the specs are accurate.

Initially I seemed to be on this trip to track swing speed and nothing but swing speed, and early on I did not think I saw the numbers I expected to see. This was fixed by properly inputting my driver specs into the app, once that was done the SwingByte seemed to be giving my swing speed numbers that were right in line with what I’ve seen on various launch monitors I’ve used. Another thing that I was set out to prove inaccurate was what the device told me about my swing in terms of the ball flight. Seems early on I kept seeing my shot shape displayed as a push slice or sometimes a pull slice. Once in a while I’d get it to say straight but not real often. So to the driving range I went armed with the SwingByte and my iPhone ready to prove this thing wrong.

Shot after shot I watched as the analysis from the SwingByte matched what I was seeing on the range. I will say that I tend to be a little more apt to call a ball straight than SwingByte is, but it really just spits out what my swing tells it and most of the time it was pretty well accurate. I will say that at first I thought having the device attached to the club might be a little distracting but you really don’t even notice that it’s there. I had absolutely no issues with my SwingByte moving or slipping at all. I have heard a couple of reports of devices moving on a couple of people on the THP forum but the company was quick to respond with a resolution.

One club that I was able to get some immediate assistance with after using the SwingByte on it was the putter. The data captured showed that I had been over exaggerating my strong arc putting stroke to the point that I was almost never getting the putter head squared back at impact. I was able to use the data from the SwingByte and immediately improve my putting on the course. I will say that on the iPhone the putter stroke is a little difficult to see which I believe is due to the shorter swing you take but the stroke is there and you can see what you’re doing pretty easily. I have seen videos of putting stroke data viewed on an iPad and it was much easier to see in more detail. 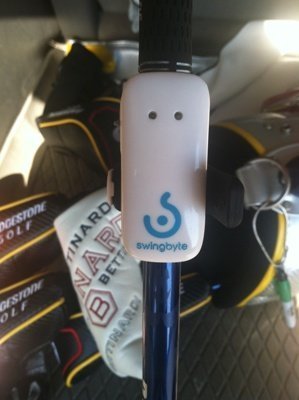 I definitely see the SwingByte as a very useful device for a lot of people. The ability to see where your club is at during all points of the swing is something that can really take someone’s game to the next level. Using the SwingByte was both fun and very informative. I found myself almost becoming too fixed on what data came across the screen and not focusing on just hitting the golf ball. That can be a common problem for anyone whether or not the SwingByte or an instructor is giving you the information. There certainly is a lot of data packed in this device and if you’re not careful you can become a victim of “paralysis by analysis” but as with many pieces of technology out there if you use it for what you need and don’t try to dig too far into what you don’t you’ll be just fine.

The SwingByte is not a replacement for an instructor or for launch monitor fittings in my opinion but it is a great tool for some self-diagnosis of some of the flaws in your golf swing. I found the SwingByte to be quite accurate in terms of what it displayed my ball flight and what I saw on the course. I always liked to call my shot shape a baby fade, not so much a push slice but the SwingByte doesn’t care about my feelings, it just calls it like it sees it. The SwingByte is available by going to the company’s website www.swingbyte.com as well as at over 1300 AT&T stores across the country for $149.