Ever see something and say to yourself ‘I wish I had thought of that?’ Well there’s a training aid out there that THP was able to test recently that made me think just that. The SwingWing Golf training is simple in its appearance and even more simple in its primary mission, to help you build power and increase clubhead speed. Sounds simple doesn’t it? Ah but does it work or is it another training aid that will sit in the corner of your garage? Check it out. 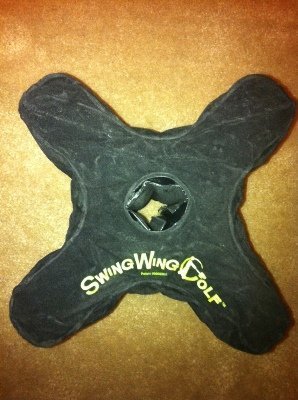 Look
The look of the SwingWing is pretty simple and basic. It’s patented design isn’t evident right out of the packaging as it’s flat like a pancake but blow it up at the range, the course, or at home and you’ll quickly see what I mean. After it’s blown up you’ll see it’s not what you’d expect. At least I didn’t anyway. It resembles a soft ‘x’ that has a hole in the middle of it where the shaft of whatever club you’re going to put it on goes into. The best thing about this is that it doesn’t clamp down or attach to the shaft of the club. What this means is that the shaft doesn’t get scratched or damaged when you’re using the SwingWing. The thing that surprised me the most about the SwingWing after I inflated it was that the surface area wasn’t smooth. It’s more of a ‘suede’ feeling material that actually adds to the look of the training aid and keeps it from looking like a swimmy that your child may wear in the pool. So let’s check out how this training aid works. 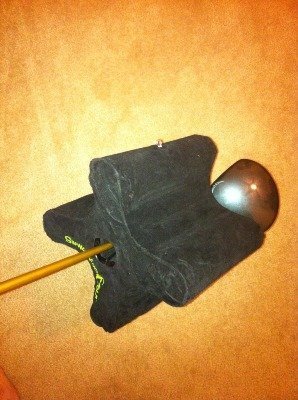 Testing
Testing the SwingWing was pretty straight forward, blow it up, slide it on, and swing. It’s really that easy. Blowing up the swing wing takes less than 30 secs and attaching it onto your club of choice takes even less than that. I tested the SwingWing on a variety of clubs which included everything from driver, fairway woods, hybrids, irons, and even wedges. I found the clubs that worked the best with it were the longer clubs where you could really get a full swing going which created the greatest amount of lag and also promoted the greatest amount of body turn as well. I’ll focus on the results of using it with a driver since I think that is the most common club that will be used with this training aid.

Once it was put on my driver it was time to start swinging. The SwingWing doesn’t lend itself to just ‘ripping through a swing’ very hard as it doesn’t secure itself tightly to your shaft. Doing this will cause the SwingWing to move too much and actually cut through the air a little too much rather than causing the resistance that the design is intended to do. When you set it up with the ‘flaps’ open to the direction you’re going to be swinging in and take a nice, smooth swing you’ll feel the resistance push against the SwingWing which helps create the lag feeling that is so sought after by us mere amateurs. Consistently doing this also helps build some strength to your swing as well but it’s not the same as putting a weight on your club.

I found the best resistance results came from using a swing that started slow and gradually quickened through the imaginary impact zone where the ball would normally be. One thing that I’d love to see is a little tighter fit around the shaft. A few times I noticed where the SwingWing would move a little too much through the course of swinging and the ‘flaps’ would almost cut through the air as opposed to resisting it. Aside from this the SwingWing was very simple to use and generally effective. 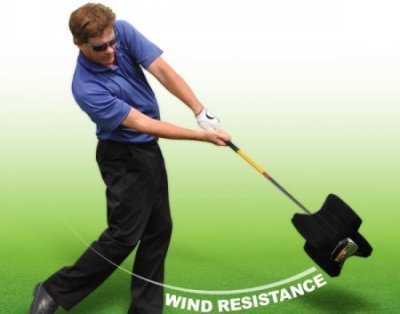 Overall
For more information on the SwingWing Golf Training Aid, click on over to www.swingwinggolf.com Retail price is $19.99 which is more than appropriate for this training aid. I found it very handy in terms of use and practicality. It inflates and deflates with ease and can either be hooked onto your bag or stored in your bag which further adds to the versatility of this simple yet effective training aid. Best of all it can be used anywhere with any club as well. Simple, practical, versatile, and easy to use. Isn’t that what a training aid should be like?