Ever since the release of the RBZ fairway wood, TaylorMade has become one of the most sought after metal-wood makers year after year. Last year, the release of the M1 and M2 lines further fanned those flames, and this year the company has continued to evolve those designs under the same naming system. THP was able to get the new 2017 M1 fairway in for review paired with the standard Kuro Kage Silver TiNi 70FW in the 15° model to see just what has and hasn’t changed this go around. 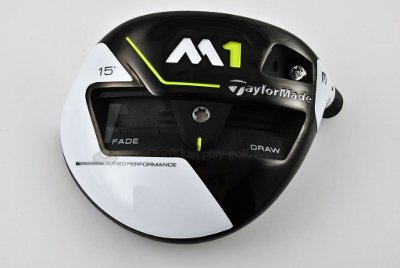 TaylorMade on the 2017 M1 Fairway Woods:

Similar to the M1 driver, a carbon fiber crown is bonded onto the head of the new M1 fairway by way of the same FF2FF manufacturing process. With multi-material construction, a sliding weight track, a Speed Pocket, and FF2FF bonding, M1 is TaylorMade’s longest adjustable fairway.

To help golfers better understand just what has gone into the design of the M1, THP believes it important to take a closer look at the key technology being utilized in the 2017 version:

Carbon Composite Crown – With the 2017 version of the M1 and M2 metalwood lines, TaylorMade has continued to utilize the “Carbon Composite” crown that they introduced last year. The six-layer carbon composite again is saving a lot of weight to be placed elsewhere in the design to maximize the adjustability and overall performance profile. More than that though, the two-tone white and black finish on the crown is the most recognizable visual on the market. The look remains effective with a clear contrast visually to aid in alignment, but that is more functional this year by making the white portion of the crown more angled compared to last year. 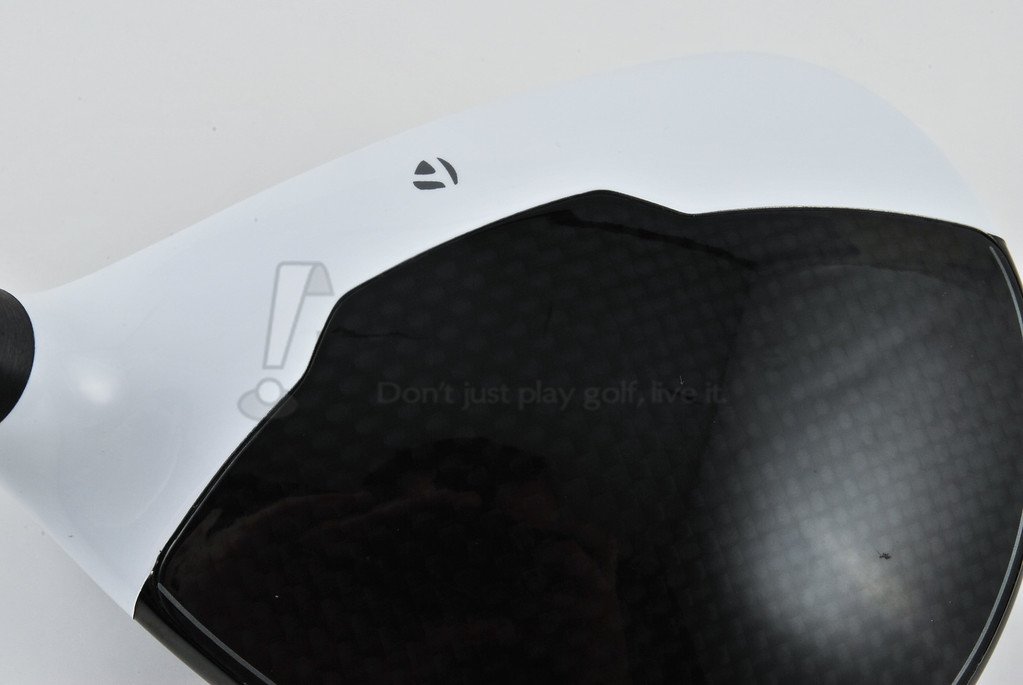 Sliding Weight – The sliding weight returns this year, but you will immediately notice its placement has been altered a good deal. The track is now more towards the rear of the club and features a single 25g weight. TaylorMade claims these changes were made because moving the track back not only allowed for a Speed-Pocket in the M1 design, but because moving the track back increased the clubhead MOI just as much as last year’s model did when splitting the two weights. Testing showed that the track moving back did not sacrifice its effectiveness, particularly when the weight is moved to the extremes as data showed the most change in ball flight patterns there. When only slightly moved from center, the change flight was notably slight, but it still affords some fine tuning. Though the overall effectiveness may not have increased, maintaining what it previously offered is a win considering it afforded the addition of the Speed-Pocket into the design. 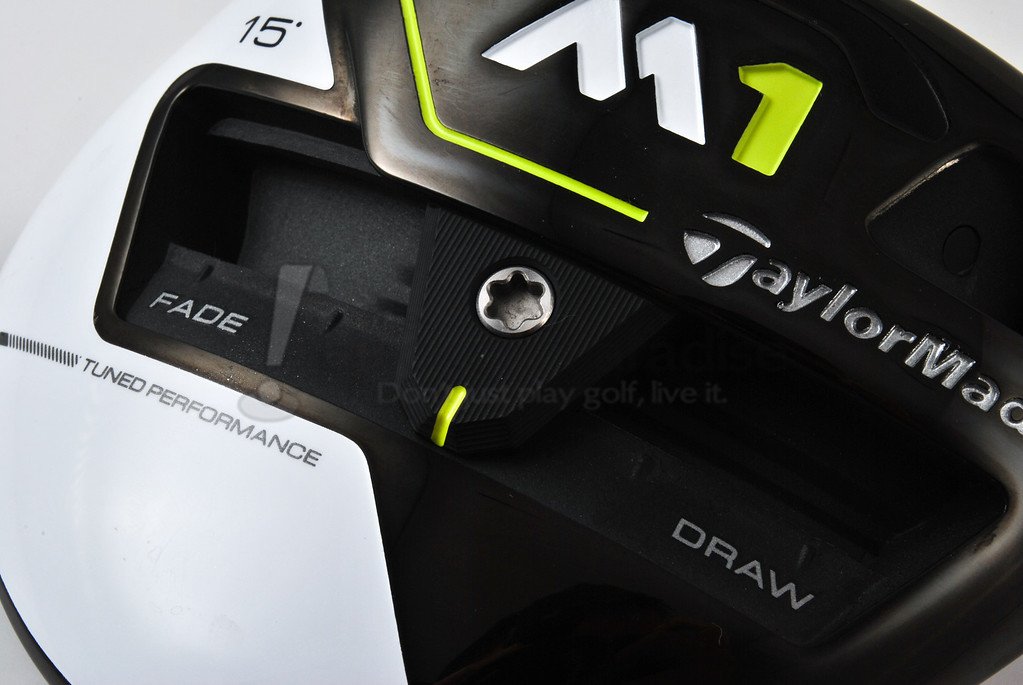 Speed-Pocket – The Speed-Pocket is something that TaylorMade has become synonymous with when it comes to fairways, ever since the release of the RBZ, it has been at the forefront for them. With the 2016 M1 (and R15 before it) however, it was noticeably missing in favor of the weight track and fine tuning it provides the stronger swingers. In 2017, the company figured out they could maintain MOI effectiveness by moving the track back and this allowed implementation of the Speed-Pocket within their player’s line of fairways. This version is the smaller iteration like what was seen in the SLDR fairway compared to the larger one on the M2’s, but the goal is the same, increased ball speed and decreased spin. During review, the playability on misses heel/toe as well as lower on the face were significantly improved from the 2016 iteration, spin was down for this reviewer about 300 RPM while launch was in the same realm. Despite the smaller 150cc size, the addition of the Speed-Pocket definitely makes it friendlier to those who don’t find center mass with every swing. It clearly won’t be as forgiving as the M2, but it is sure to surprise those who want to maintain some forgiveness but prefer the much more traditional and smaller footprint. 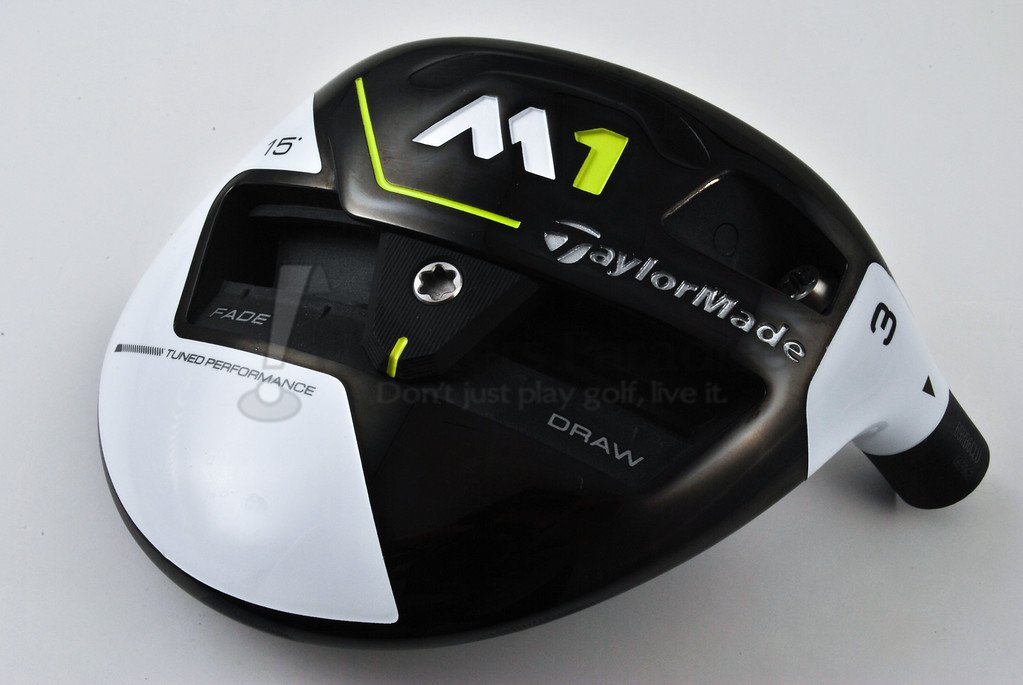 The introduction of the M-Series metalwoods (or un-metalwood according to TaylorMade marketing) immediately placed them as the most recognizable clubs on the market and on television. The forward (white) section of the crown has been made a bit thinner and has an increased angle which makes for not only a more aerodynamic visual to the eyes, but it also frames the ball at address even better than the 2016 version. The sole of the M1 this year is a cleaner look even with the addition of the Speed-Pocket, its modern yet not gimmicky, overall it’s a contrast to that of the M2 which in the opinion of this reviewer got much busier. TaylorMade has also continued to offer premium grips on their M-Series line of woods and the corded UTx is a very popular one which adds to the overall package. When one adds into consideration the smaller (150cc) footprint, the 2017 M1 blends modern and classic looks better than perhaps any other fairway on the market. 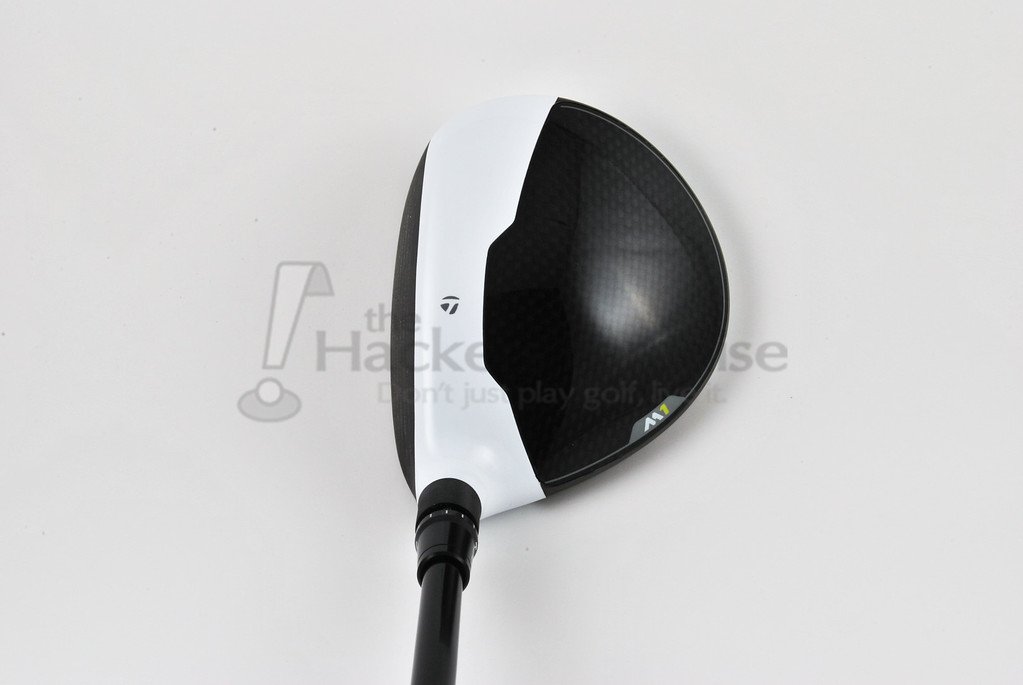 The 2017 M1 fairway falls into the category of “better players”, although everyone has different swings and needs, the recurring theme during review is one of low spin and low-mid launch. In fact, the M1 proved to be the second lowest spinning fairway wood that this reviewer has tried this year.  Combine that with a flat/piercing natural trajectory and you have a club with significant distance potential. The 150cc size is going to look tiny at address to those who have acclimated to the bigger heads like its sibling the M2, but for the player who longs for the days of workability, the M1 offers that kind of playability in a highly adjustable package. In fact, fitting and tuning will be key with the M1, for this user the zone of optimal performance was found at +2 with neutral weighting, for you it may be very different.

The sound and feel of the M1 is much more traditional than that of the M2. Despite the use of so much carbon composite and the sliding weight track, TaylorMade has again proven they take sound as serious as anyone. There is a lot of power behind the acoustics and tactile feedback at impact, but it avoids being a deadened sound like the M2 and instead maintains an ever so slight higher pitch that most will find familiar and comfortable. 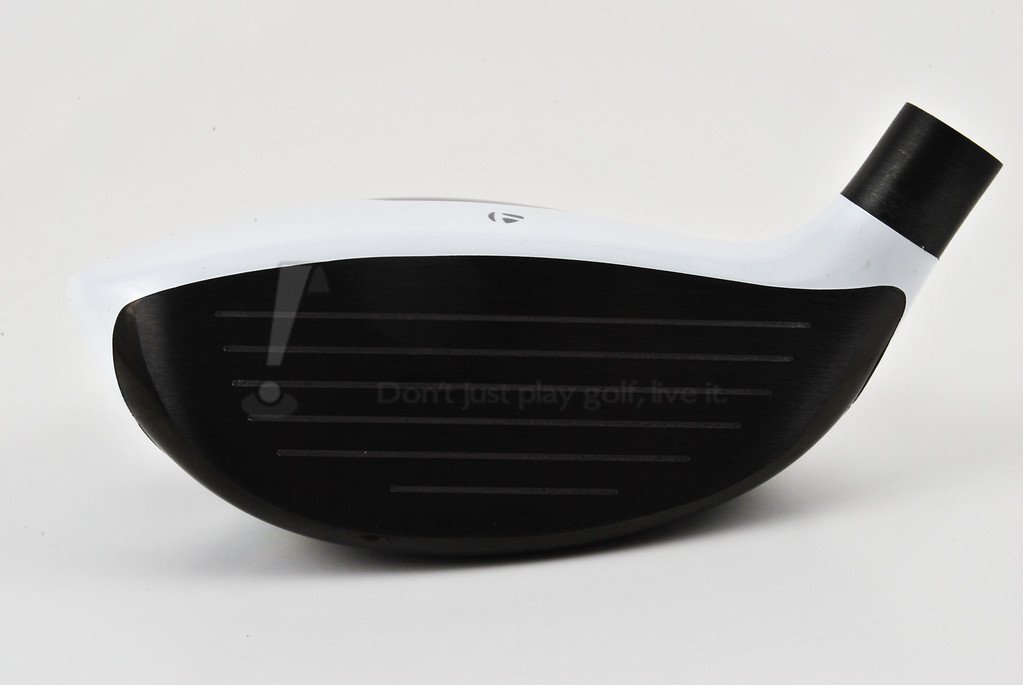 As mentioned earlier, the 2017 M1 showed among the lowest spinning fairways this reviewer has worked with this year, staying in the mid-2000 RPM range throughout testing. Combine this with the more piercing launch and flight, the recipe is for distance potential. Off the tee, the M1 was shockingly strong, offering unexpected carry numbers while keeping a solid run-out even when lofted up. When hit from the turf, the smaller 150cc size and face depth allowed for a confident and aggressive swing to yield ample distance, though the roll-out here was notable because of the flatter overall ball flight. Also, concerns about turf interaction and debris collection were quickly quelled as the footprint allowed for consistent ball striking from the fairway and intermediate cut while the sliding weight being pushed further back in the design made it much less susceptible to debris getting caught up in it. 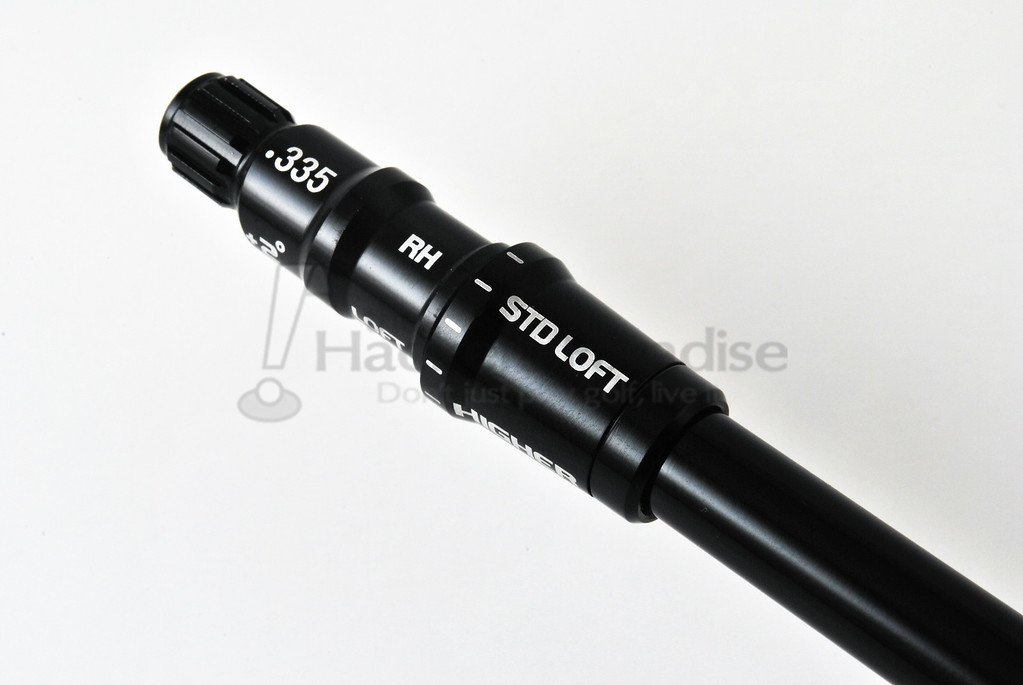 The M1 definitely rounds out the lineup for TaylorMade where fairway woods are concerned. Although it definitely leans to the side of the spectrum of stronger swingers who want accuracy and workability without sacrificing low spin. Despite lower spin, misses laterally still meet with some gear-effect tendencies (accentuated draws off the toe and fades off the heel), but that isn’t a surprise nor a detriment for who this head is going to appeal to. It also bears mentioning that in the opinion of this reviewer the addition of the Speed-Pocket into the smaller M1 design is being extremely undersold by TaylorMade as we know by now the technology absolutely works and during review the ball speed reactions to misses again backed that fact up.

Although by keeping the names of the M1 and M2 exactly the same this year with no differentiator has been a somewhat debated one, there is no doubt that the M1 fairway has advanced from its predecessor in terms of performance. If one is seeking out low spin and low-mid launch in a smaller footprint then this club merits a hard look. Add into it all that TaylorMade is offering 30+ no upcharge shaft options and significant adjustability it makes the fitting possibilities vast compared to just about every other fairway wood on the market. It isn’t the most forgiving fairway on the market, but it hits the niche TaylorMade needed it to extremely well.

The 2017 M1 fairway woods are prices at $299.99 and information on the design as well as everything else TaylorMade offers can be found at www.TaylorMadeGolf.com.