No company out there has a track record of putting out unique names and unveiling them in flashy ways as TaylorMade does. With their newest line, the JetSpeed, they have done both of those things by pairing a new name while preaching speed and power. Gone is the white, yellow, and grey of the past and in its place is a continuation of the blue, black, and silver color scheme. With the JetSpeed line TaylorMade is seeking to turn some heads in many different categories.

For the purpose of this review THP got to spend time with the 15-degree JetSpeed 3-wood paired with the stock Velox T shaft.

Our Longest and Most Playable Fairway Woods – Ever

JetSpeed fairway woods and Rescue™ clubs each incorporate a radically redesigned Speed Pocket that’s smaller and accounts for less weight while remaining just as efficient at boosting the speed of the clubface. Think of it as an afterburner for your ball. Unlike the Speed Pockets in our previous fairways and Rescues, which were empty, JetSpeed’s is filled with polymer to keep debris out and absorb unwanted vibration without slowing down the clubface.

The redesigned Speed Pocket also allowed TaylorMade engineers to make the face shallower while still maintaining the same high speed as RBZ Stage 2 fairways and Rescues. The JetSpeed 3-wood’s face is shallower than the RBZ Stage 2 3-wood (by 2 millimeters), bringing the CG in lower in relation to the center of the face to make it easier to launch on a high angle. Plus, it gives JetSpeed fairways and Rescues an especially sleek and stealthy appearance, like an F-22 Raptor ready for takeoff.

All JetSpeed metalwood clubfaces (driver, fairways and Rescues) are made of JetSteel of an ultra-strong steel alloy that adds to the speed of the face. JetSpeed fairway woods are equipped with Matrix’s Velox T 69 shaft. At 69 grams it’s a heavier shaft than we’ve used in our previous fairway wood models. The added weight promotes better club control during the swing, which helps players achieve a sound swing path and solid contact, which together promote increased distance and accuracy.

With the JetSpeed line TaylorMade has further separated themselves from the matte white we have come to know them for over the past few seasons. In addition to the matte black finish of the crown there are graphics that are intended to aid in alignment. The crown graphics on the JetSpeed however are much more subdued than we saw last season with the Stage2 and are much more akin to what was on the Superfast lines. The head also sticks to TaylorMade’s 2013-2014 color pallet of black, silver, and blue and has a tremendously clean look to it. Pair all of this with a silver face, and you have a nice all around package aesthetically speaking. 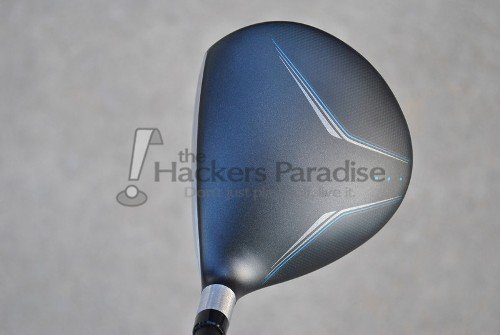 The first thing that most will notice about the JetSpeed from a design standpoint is that the overall footprint is slightly larger than that of the SLDR fairway wood (165cc to 155cc), yet still smaller than the standard Stage2 from last year (165cc to 175cc). Also, the SpeedPocket in the JetSpeed is the same redesigned curved shape that was utilized in the SLDR, but substantially longer from heel to toe on the clubhead. Additionally, the fairway wood sets up with a neutral to slightly closed face angle and features a much more shallow face than we have seen from TaylorMade in some time. When one ties this all together it makes for a fairway wood that looks like it can be hit from any lie, which will undoubtedly make many golfers happy to see. 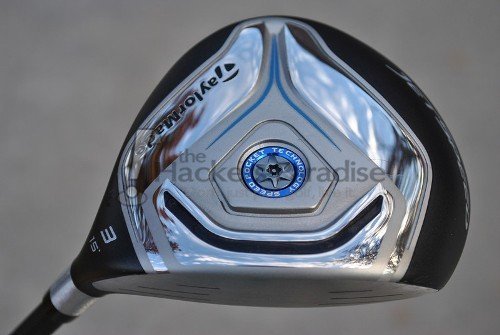 Keeping suit with the rest of their offerings this year, TaylorMade has once again put their stock in moving the center of gravity (CG) of the club lower and more forward with the purpose of reducing spin while increasing ball speeds. As always, when moving the CG forward in the clubhead the loft of the club typically becomes more of a focus, and as we see each week, TaylorMade is pushing higher loft to players of all demographics in order to truly take advantage of the CG.  Unlike the SLDR fairway offering however, the JetSpeed does not feature an adjustable hosel, so these are clubs that golfers should definitely go and hit before purchase to ensure they are getting ideal launch numbers for their personal swing. 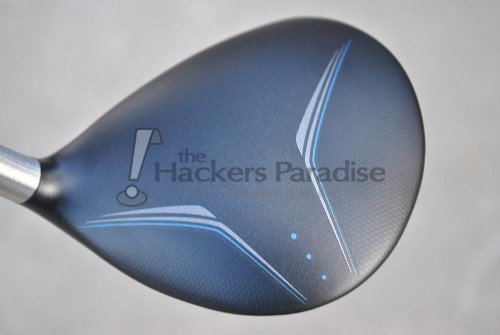 The Matrix Velox T shaft that Taylormade paired with the JetSpeed complimented the lower and more forward CG of the head design remarkably well, as it provided a penetrating mid-high ball flight from all lies. Additionally, the pairing showed an impressive amount of overall accuracy from a dispersion standpoint on a variety of swings, tempos, and situations. This is more impressive considering the 43.5 inch playing length of the JetSpeed. From an accuracy and trajectory standpoint this is one of the more impressive shaft pairings that we have seen from TaylorMade in their metalwoods in some time. 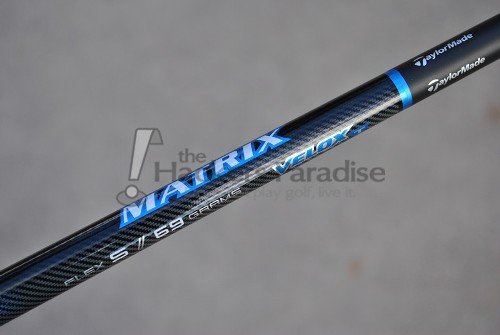 The JetSpeed features a completely redesigned Speed-Pocket from the previous fairway woods released by TaylorMade (RBZ and Stage2). Essentially, this allowed them to save weight and redistribute it in the head to have a larger impact on spin and launch while not losing its effectiveness. The Speed-Pocket is also now filled with a polymer to prevent dirt from becoming stuck in it (VERY nice), the overall shape of the slot has become more curved than previous versions, and it is much larger/longer than the pocket being utilized in the SLDR fairway woods. All of these improvements combine to end up with what TaylorMade is calling their “longest and most playable fairway wood ever”. Large claims to be sure, but not as brash as seeing a promised number like we have in the past – just collected confidence in the design. 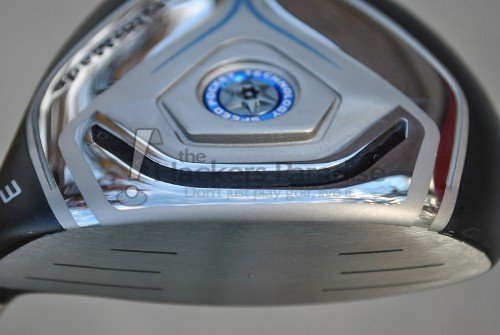 On the course this is one of the longest fairway woods that this reviewer has ever put into play from both the tee and off the deck. Much of this undoubtedly comes from the reduction of spin that the forward CG provides. However, the lower profile of the head itself to get the CG underneath the axis of the golf ball should not be slept on and could be the real star here. For all around distance, this is the second TaylorMade offering this year that could be quite an asset in the right hands. 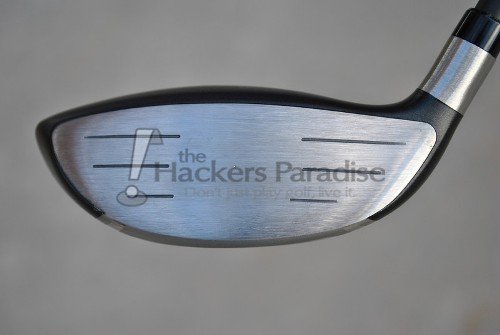 From the standpoint of overall forgiveness, the JetSpeed offered a bit more on heel-side and toe-side ball strikes than its cousin the SLDR. Much of that likely comes from the more elongated slot in the sole of the club (almost double the length of the one in the SLDR), expanding the recoil zone of the face further away from the center. In the end however, as with any club which bolsters a more forward CG there will be some give and take. It gives lower spin and more distance while taking some of the forgiveness seen in fairway woods with a CG that is situated further back in the head. 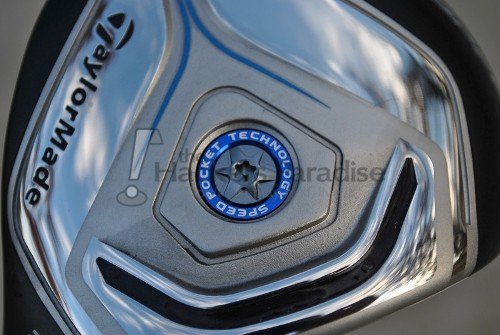 From all situations the JetSpeed elevated the ball very well and that lower profile really lent itself to making the club a more viable option from the fairway. From the rough the club was neither better nor worse than other options out there and performed pretty much as one would expect from a fairway wood without the built in railings or beveling that other models offer. The  JetSpeed also showed a solid amount of workability, allowing to turn the ball left or right as needed and flighting the ball down was never an issue.

The JetSpeed line of fairway woods from TaylorMade are without any doubt solid performers in the end. One somewhat interesting thing about the club however is just how similar it is performance wise to the SLDR fairway that we reviewed earlier. While the lower profile lends itself to being easier to hit off of the deck and it does carry with it a bit more forgiveness than the SLDR, it isn’t as different of a line performance wise as we might expect. Essentially, with the same forward and lower CG golfers will see some eerily similar traits between the two lines. However, in the end the nice thing is that with all their similarities the two will likely fit two different eyes and provide a bit of differentiation there.

The standard 15-degree JetSpeed Fairway wood as reviewed in this article has an MSRP of $229.99. For more information about the club, be sure to check out www.taylormadegolf.com.