For TaylorMade in 2015, the return of the “R” series name is a step in the nostalgic direction, while incorporating a series of beneficial design elements from previous metalwood offerings.  For the company noting their status as the number one driver in golf, there should be optimism that color and name won’t be the only elements driving intrigue with this driver lineup. 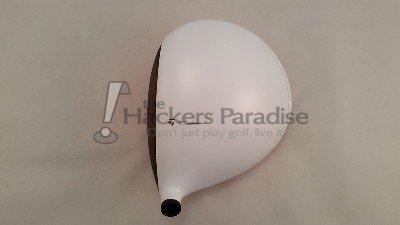 MADE OF GREATNESS: OUR MOST TECHNOLOGICALLY ADVANCED DRIVER EVER

R15 also features a lower and more forward center of gravity (CG), to promote higher launch and lower spin. The Front Track system performs like a Speed Pocket, reducing spin and increasing the size of the sweet spot, and the 4° loft sleeve along with new sliding split weights (12.5g each) make dialing in your tee shots easier than ever—slide the weights to center for max distance, heel for max draw, toe for max fade, or split them for max stability.

Only our greatest breakthroughs are worthy of being called an R. 15 years of our groundbreaking metalwoods technologies from the #1 driver in golf have been fused with brand new innovations into a single, game-changing design. We put everything we have into the R15, so you can find out what you have—in you. 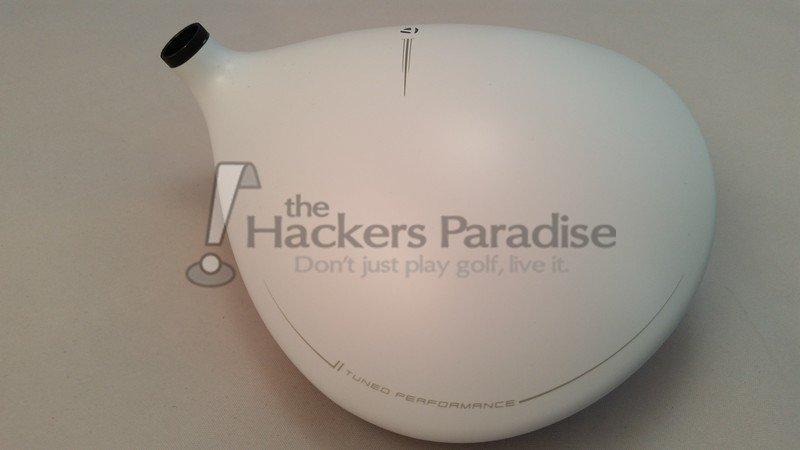 Straight away, the mind goes back to the familiar visual elements of the former “R” releases from TaylorMade.  The matte white head, the black base and face, as well as the red accents really bring the golfer back to some of their more popular heads over the last half decade.  Along with this sense of visual nostalgia, there is an obvious continuation of the SLDR technology between the low and forward CG concept and track weight system. 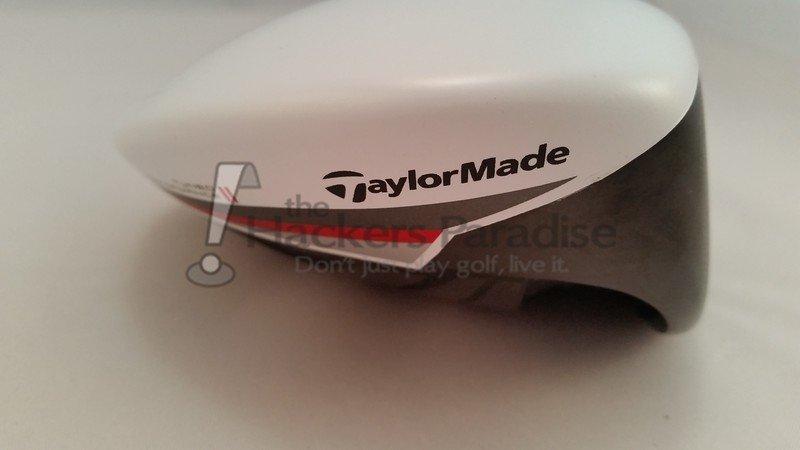 Early swings introduce a strong balance between the 66 gram Fujikura Speeder 661 Evolution, and the 460CC head.  The combination of the two creates a D4 swing weight, and while the larger head presents the potential to be sluggish through the transition of the downswing, it’s simply not the case.  Running along the back of the driver head at address are subtle grey graphics, as well as a TaylorMade logo and line that frame the ball quite well.  Opting for a mid-range grey is beneficial for those who prefer the graphics to blend more than they do stand out. 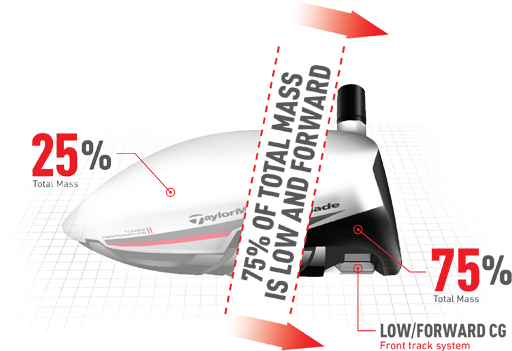 A remarkable 75% of the total mass of the head is down towards the bottom front, which according to TaylorMade, encourages higher launch with low spin.  This is also manipulated to be even lower by adjusting the weights on the track system to the lowest point possible. 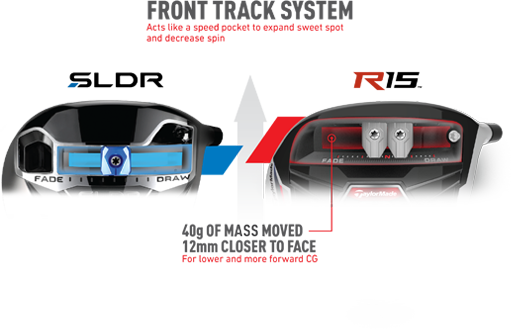 While the SLDR track system brought moveable weight technology to the bottom front of the face, R15 brings it even further forward with two weights rather than one.  With both weights being 12.5 grams, this is a noticeable change; closer than ever before to the face. 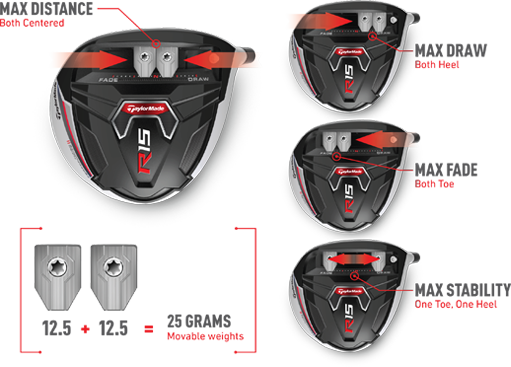 By design, the adjustments that are available to be made with R15 make a lot of sense visually.  Driving both weights to the bottom center introduces what seems to be a minor reduction in spin and increase in distance at the cost of forgiveness.  Moving the weights to the two extremes drives weight to the outside of the sweet spot and slightly up, introducing an element of forgiveness and stability to the head.

Golfers who lean more towards the creative side of adjustability will be inclined to leave a weight closer to the neutral position on the track, driving the other towards the toe (to help fade) or heel (to help draw).  This is a notable improvement to the SLDR track system, which only offered one weight.  Rather, golfers can now have a bit of both worlds, between shot shaping, stability, and distance. 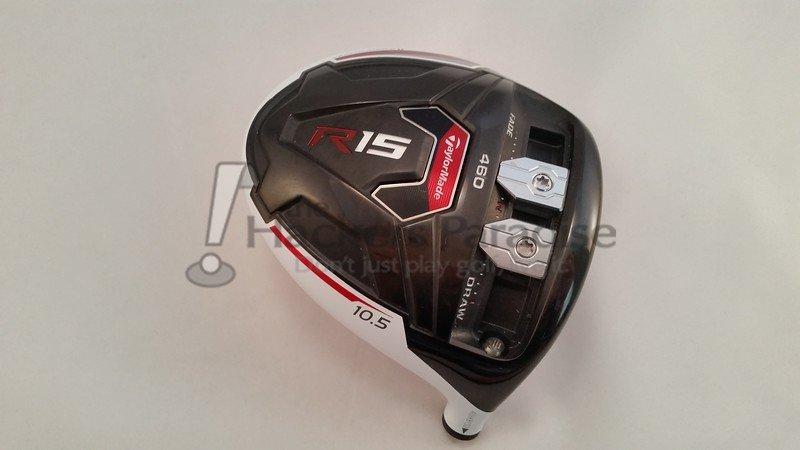 The final feature of R15 adjustability is built into the adapter.  Golfers can adjust the TaylorMade R15 head 12 different ways, ranging from +/- two degrees, as well as altering to an upright setting.  These settings will slightly open the face while you reduce loft, and slightly close the face while you increase loft.  While this feature is not something new to the TaylorMade driver design, it works very well with the weights in the track system to create the ideal setup.  Golfers simply need to make sure they select the most ideal head loft (available in 9.5, 10.5, 12, and 14 degrees) prior to purchase. 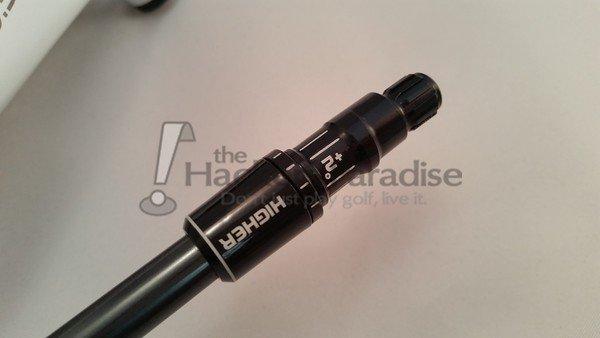 The Benefits of Flexibility in Driver Adjustment

As we move towards a driver market that includes more and more adjustability, there seems to be a trend of not only providing golfers with the ability to alter their driver in a way that suits their launch needs, but also incorporates a setting that counters these changes.  In the case of the R15 TP driver, testing proved that having the multiple weights became a major benefit when also making adjustments to the adapter position.  Golfers can move one of the two weights to the perimeter while still maintaining some of that center weighting of the second weight.  This is a change that was very welcomed after SLDR’s limitations of a single weight, and makes up for the loss of adjustable perimeter weighting that was present in the former “R” series drivers. 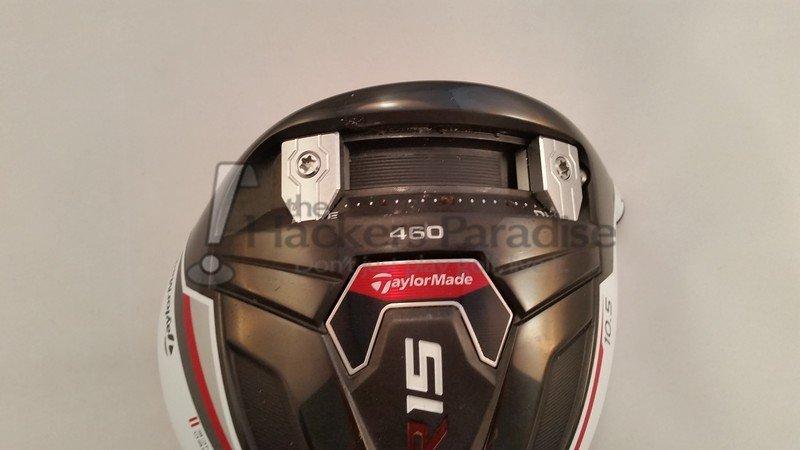 Throughout the testing period, the weights were moved to nearly every possible setting, along with changing the lofts to see just how much change could be introduced without altering the swing.  While distance and stability can be a very situational and subjective experience, testing presented the setups that TaylorMade has established to be correct.  The numbers may not have been a vast change while making finite changes, buy it does allow the golfer to be very particular about where the weights are located, a feature that is always welcomed for tinkerers and perfectionists. 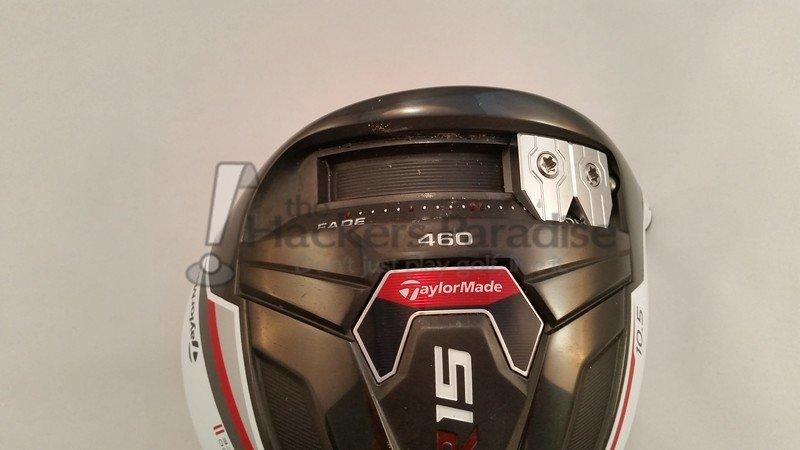 Despite sound being very subjective, and certainly changing depending on location (sim, covered range, course), the TaylorMade R15 TP driver introduces a sound that is very solid at impact, changing in audible volume between the heel (slightly more dull) and high on the face (slightly hollow).  The quality contact in the center of the face will generate a lively and shallow sound, with hints of a slightly muted SLDR and a sharper yet toned down R1.  During the testing period, the R15 did not feel overly obnoxious with regard to sound, however well struck shots provided ample feedback for curiosity.

One of the major assets to the R15 design is the ability to generate quite a bit of clubhead speed.  During testing, multiple users experienced an increase in swing speed utilizing the R15, and in many cases introduced impressive carry numbers.  For higher spin players, moving the weights to the central location and making solid contact meant above average carry distances, while only losing a marginal amount of distance with the ball contact lower towards the heel or high on the toe side. 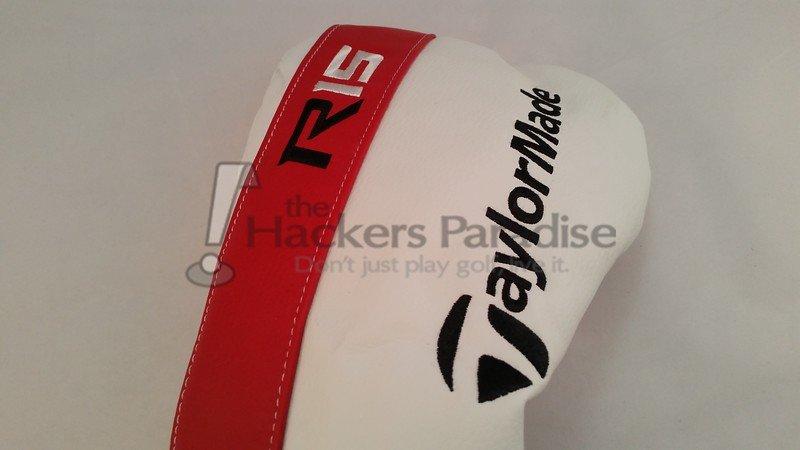 The conversation of the R15 driver often falls to slightly more spin and marginally higher launch as compared to the SLDR release.  Throughout testing, results seemed to stand true, more notably with launch.  While TaylorMade encouraged golfers to Loft Up over the past year, it may not be as necessary to stray from normal head preference when giving the R15 a test drive.    Considering the stock TP shaft is the Fujikura Speeder 661 Evolution, it was not surprising to see a consistent mid to mid-high flight for faster swinging, high-spin players, and something closer to a low-mid to mid launch for golfers on the lower launch, lower spin spectrum. 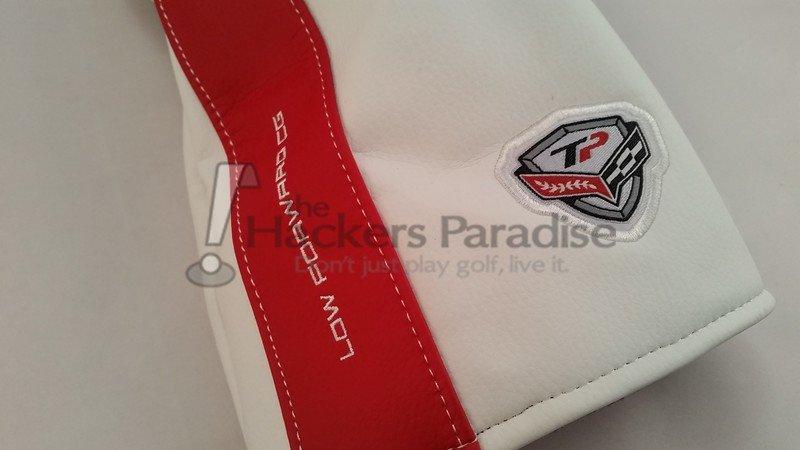 This portion of the review can present some challenges.  For a majority of the R15 TP driver testing, distance reigned supreme, with accuracy on the face of the head only introducing very marginal decreases in ball speed and total distance.  This included very repeatable ball flight with a small tendency to fade while on the TP setting.  With that in mind, the R15 did not perform all that well on strikes where the face angle into the ball, or the swing path overall, was less than ideal.  This experience included marginal changes to contact that transitioned between fade shot shapes and pull draws.  These experiences were entirely the result of poor swings and overcompensation.

Within reason, expectations for a driver and forgiveness are entirely up to the individual, and many strong ball strikers should not think twice about taking advantage of the solid contact experiences of R15.   Those who are seeking the most forgiving driver experience possible may want to either seek a shaft with some additional spin, move the weights to the perimeter to create stability, or test the R15 alongside the Aeroburner to draw head-to-head comparisons. 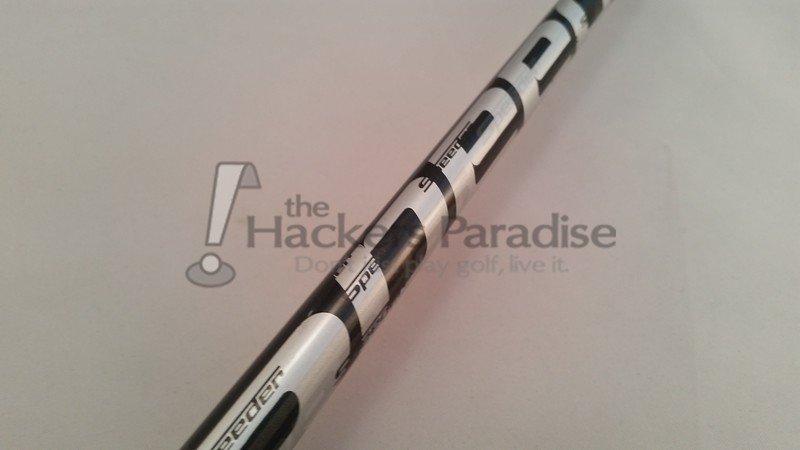 The optimized pairing for the R15 TP driver is the Fujikura Speeder 661 Evolution.  Weighing in around 68 grams, with tendencies for mid launch and mid spin, it applies the stable transition into the ball that would be expected from a ‘tour spec’ shaft.  With the R15 head, it provides a typical golfer with a mid-launch characteristics, however it seems to thrive at higher swing speeds, promoting a mid-high flight that travels well when paired with the lower spinning R15 head. 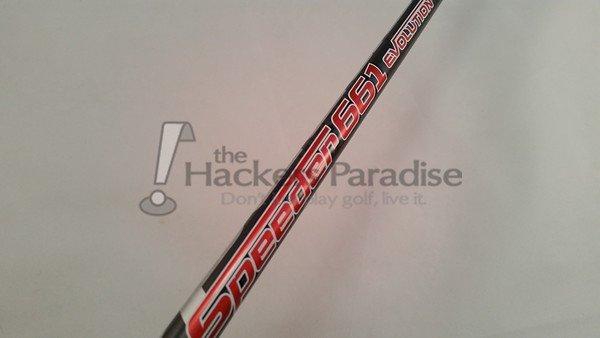 While the grip can be the fastest piece of a golf club to be removed in order to customize, the R15 TP driver comes stock with a Lamkin UTx grip labeled with “Tour Preferred” in red lettering.  It makes for a fantastic look, and considering the quality of the UTx, is worthy of high marks for both durability and weather performance.  The black and grey coloration ties into the Speeder shaft exceptionally well. 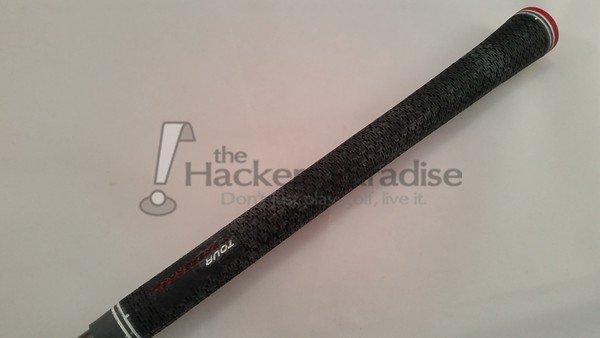 TaylorMade has taken a solid step in the direction of the majority of golfers with their release of the R15.  While testing presented challenges when face angle and swing path went awry, the R15 remains one of the more impressive swing speed and carry distance creators when struck well.  This return to the well favored “R” series combines a head with excellent adjustability technology, and a high end shaft to compliment.  For more information on the R15 TP Driver, visit www.TaylorMadeGolf.com.