In recent years the evolution of the fairway wood has been nothing short of staggering. Since the first use of the various slotted technologies and the gains they have led to for most golfers, fairways are now firmly in the mind of many amateurs. With that, the sizes, shapes, and even colors for fairway woods have gone through a myriad of changes and no one has driven that more than TaylorMade. With the new releases upon us, those changes are continuing with adapting the basic principles of their popular SLDR driver (lower CG) and taking it into the realm of fairway woods.

For the purpose of this review THP was sent the standard SLDR 3-wood at a loft of 15-degrees and paired with the stock Speeder 77 shaft in stiff-flex.

Smaller is better. The new Speed Pocket is smaller (introduced in the RocketBallz fairways and Rescues), which actually makes it more efficient at increasing how fast the face flexes at impact, promoting faster initial ball speed across a wider portion of the face, which helps you get consistently long distance on every swing.

We learned with the SLDR driver that a low-forward CG location allows many players to increase their loft to achieve the right combination of high-launch / low-spin that promotes maximum distance. The same thing goes for SLDR fairway and Rescues, which is where our Loft Sleeve technology serves such an important purpose, by allowing you to adjust the loft 1.5° up or down to dial in their optimal launch conditions.

Visually, SLDR fairways and Rescues incorporate the same rich, charcoal-gray crown and traditional shaping as the SLDR driver. The dark crown-color contrasts beautifully with the silver-colored clubface to make it easy to align the face accurately at address.

Love them or hate them, no one can deny that TaylorMade has a way when it comes to the color schemes that they use within each line that they release. The SLDR line is no different with its metallic charcoal crown, brushed sole, and blue accents. The result is possibly the best looking fairway wood that TaylorMade has released in years. Even with the small graphic at the rear of the crown it is a clean look, with nothing unnecessary and no bright white finish – it’s just a look that says this one has come to work. 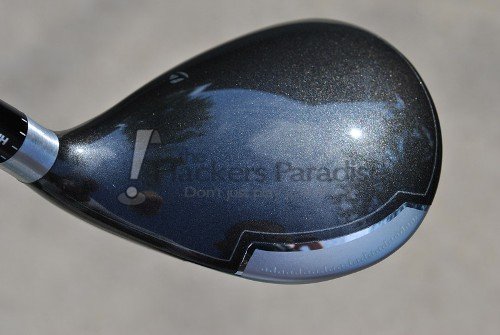 Obviously the aforementioned finish qualities are what the eye is going to catch first with any club, but equally important is how the actual design aesthetics round out the package when standing over the golf ball. With the standard version of SLDR fairway there are some major changes from what we have seen in the recent past with TM fairways. 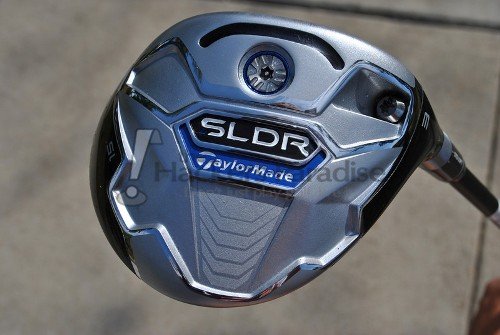 The first change worth mentioning is the smaller overall size of the head. The SLDR 3-wood comes in at 155cc, whereas the last non-TP fairway that TM released was 175cc. It is a sizeable difference for sure. The benefit to this is that the profile of the SLDR looks more like a fairway wood and less like a miniature driver, a definite improvement by many people’s standards. Additionally, the Speed-Pocket is much different than we have become accustomed to as it is smaller and a slightly different shape. Put all of this together and the SLDR fairway wood is an impressive package.

The most recent push from TaylorMade with the introduction of the SLDR driver is that of a more forward and lower CG, which is intended to promote lower spin and faster ball speeds. That same ideology/technology has been applied to the SLDR fairway and hybrid lines as well. Because of the CG movement creating much lower spin, the actual effective loft of the club has become more important as far as achieving optimal launch conditions. The low-spin/loft situation is exactly why TM included their Loft Sleeve technology in the standard version this year and not just the “Tour” version as they did in the past. 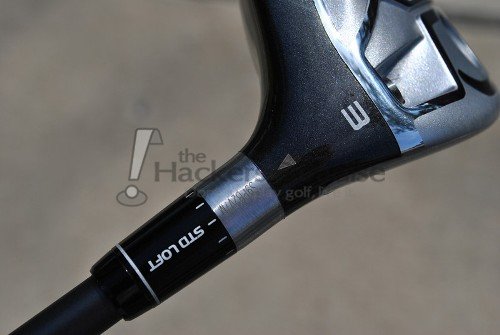 Clearly, such focus on a lower spinning design where increased loft has been necessary for even Tour players can lead to a bit of hesitation by many golfers. On the course however this proved to not be anywhere near as severe as with the driver. In fact, off of the tee in particular the ball flight was quite impressive as it settled nicely into the mid-high category the majority of the time. One area where the low spin affected trajectory more was off of the deck. In its standard 15-degree setting, the ball flight was definitely lower and more penetrating, but after adjusting the Loft Sleeve the ball flight off of the deck became higher and more consistent.

By now most golfers know about the purpose of the Speed-Pocket and its role in impacting face flexion and ball speed. As years go by it is now clear that this is a technology in which TaylorMade has bought all the way into across their lines, but rather than settling with it, they are continuing to evolve and improve it. Anyone who has seen the previous models will instantly recognize the difference in the Speed-Pocket within the SLDR. The pocket itself is now filled in with a polymer to prevent debris (a common complaint with prior versions) and also is smaller and slightly u-shaped. Combine this refined Speed-Pocket with the lower spin and higher ball speeds created by the more forward CG and TM believes they have created their longest fairway wood ever. 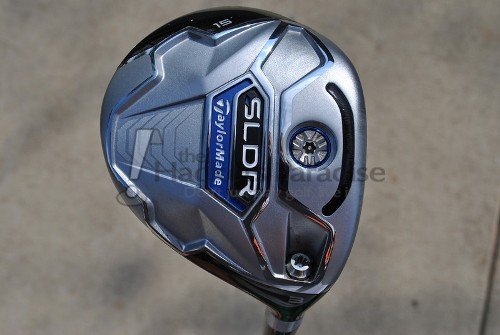 Undoubtedly, distance claims always get different reactions among golfers, some positive and some negative, but in the end it all comes down to whether or not the performance backs up the claims. As far as the SLDR fairway wood goes on well struck balls, TaylorMade’s belief in its length certainly seems warranted. Both off of the tee and from the fairway the club was legitimately longer than the RBZ and Stage 2 as well when hit side by side. In fact, the term “sneaky long” would definitely be applicable here. Interestingly, considering the typical effects of a more forward CG on the area outside of the sweet-spot, the mis-hits did give distance loss, but not nearly as much as expected.

As has been seen with the SLDR driver, the movement of the CG more forward and lower in the head does indeed affect spin rates and ball speeds on well struck shots, but it can also have a tendency to accentuate misses in both distance and direction. Entering the review similar results were expected out of the 3-wood; however they were definitely not seen in the same amount. 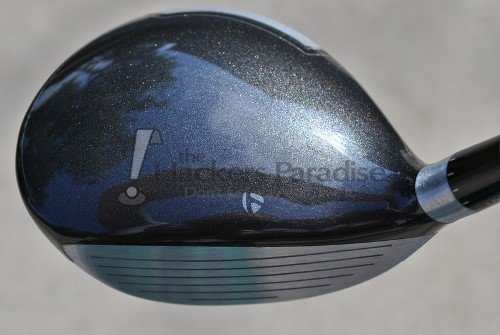 The SLDR fairway has a very nice sound/feel to it upon impact. It’s a slightly lower tone and impressively solid sounding. The nice thing about the sound is that it also gives distinct feedback as to when and where a miss takes place. The actual results of misses seem no more severe than one would expect out of any fairway wood. It is very possible that this comes back to the Speed-Pocket and its redesigned size and shape allowing for increased face flexion and thusly restoring some of the cross face (outside the sweet spot) forgiveness that would typically be lost when the CG is moved more forward and down inside the clubhead. Either way, although it will not be mistaken for an ultra-forgiving fairway wood, it is much more playable than many people may initially think.

From a playability standpoint with a fairway wood it is always important to take a look at the club off of the tee, off of the deck, and the ability to work the golf ball with it. Off of the tee the SLDR fairway wood shines, as it provides a ball flight and range of accuracy that would make it a useful tool for many in that area of their game. Off of the grass is where the loft on the SLDR comes into play the most. The club itself is effective through impact with its build, despite not having any type of rails, but the low spin nature will certainly influence the type of ball-flight the user sees (high/low). For those that like to work the golf ball, the more compact nature of the SLDR fairway lends itself well to turning the ball left or right when need be, more so than the Stage-2 did before it. 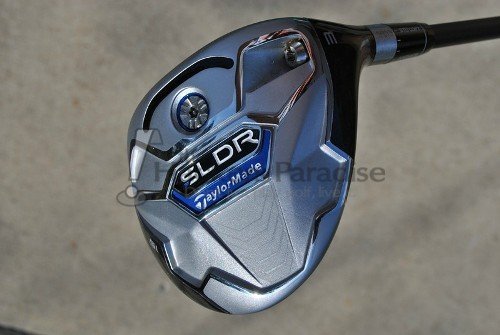 It is impressive in today’s golf club industry to see a company developing what they feel to be a revolutionary technology and truly sticking with it as time goes on, rather than just hopping from concept to concept. With TaylorMade, they clearly believe that the Speed-Pocket tech in fairways, hybrids, and even irons is a game changer and something that makes their clubs stand out from many other contenders. Frankly, the results seem to back that quite often, and with the SLDR Fairway wood the Speed-Pocket combined with the lower CG has made for a very interesting club. Additionally, it is certainly nice to see the push that TaylorMade is making about utilizing the ability to adjust the loft in order to find the perfect launch angles with this lower spinning line of clubs. In all, the SLDR Fairway is most definitely at least worth a try for those looking for a change in their bag.

The standard 15-degree SLDR Fairway wood as reviewed in this article has an MSRP of $249.99. For more information about the club, be sure to check out www.taylormadegolf.com.