TaylorMade Golf recently sent over the TR3 True Path training aid for THP to review. This product is made to promote a better putting stroke and TaylorMade is saying that their Tour staff is using it. I don’t share many similarities to the pros, but improving with the putter is definitely something on every golfer’s mind.

Information from TaylorMade
The TR3 True Path putting trainer was designed after years of studying the putting strokes of Tour players, top PGA club professionals as well as top amateurs. The TaylorMade putting lab data of thousands of strokes was analyzed to determine common faults and the best techniques of some of the best players in the world.

The benefits include:
• Consistency in putting stroke path
• Instant putter face alignment feedback
• Improved muscle memory for proper putting stroke path
• Improved putting tempo
• The TR3 True Path can be used indoors or outdoors
• Can be used with one rail, two rails, and with or without the base
• Is lightweight and portable, fitting easily into a golf bag pocket 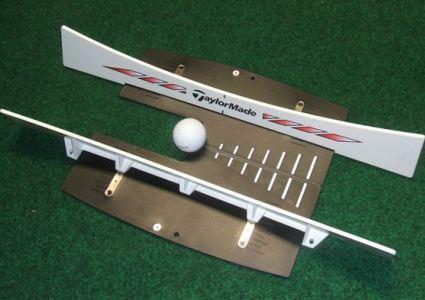 Initial Thoughts and Setup
One thing I’ve always appreciated about TaylorMade training aids is that they come in slick packaging and are usually easy to transport. The True Path comes apart and is put together easily. It also comes in a handy little carry-bag so you can keep the pieces together if you decide to take it out and about. It may seem like a small thing, but it’s appreciated when you don’t have to worry about losing pieces.

Speaking of pieces, there are three that make up the True Path; a base and two arms. Conveniently, they attach to each other with magnets and are adjustable to account for different sized putters. One arm is straight and the other is slightly curved. The arms can be put on either side, which allows the True Path to be used for arced or straight strokes. Also, you can use the arms without the base on the putting green by placing tees in well-placed holes. I’ve also seen pictures where only one of the arms was used, so there are quite a few options for you to try out.

The True Path is a pretty simple device, which is one of its best assets. All you need to do to use it is set in the ground, put a ball down at the front of the base, and let the heel of your club run along the arm that is closest to you as you take your stroke. It’s an easy way to see and feel a correct putting stroke and you can follow that up by actually putting the ball towards a hole.

Did it Help?
First of all, I think evaluating training aids in the short-term can be difficult. Many of them take a good deal of time and work before we start seeing results. However, I felt like I saw some pretty fast improvements after using the True Path. I putt with an arced stroke, but I am constantly guilty of using too much arc. I’m your classic “if a little works, a lot is probably better” golfer, so I can really over-exaggerate my putting stroke if I’m not careful. After just a few putts using the True Path I felt like I had a good grasp, both visually and mentally, of where my stroke really should be. Interestingly, I realized that I was much more relaxed using the more ‘natural’ arc that the True Path promoted. It was very helpful and I ended up seeing some improvements on the course, including matching my lowest number of putts in a round for the season.

I also think the True Path could be a useful long-term training tool for many people. I tend to slide back into bad habits every now and then and I’ve already grabbed it just to refresh myself on what I should be doing. That makes this a pretty versatile training aid. It can be useful out of the box and a year down the road. In my opinion, that makes it a worthy investment.

One thing to remember is that the True Path does work for the straight back, straight through style of putting as well. I talked quite a bit about my own putting stroke, but it can be set up either way. 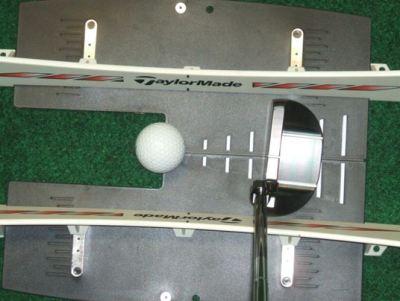 Final Thoughts
It was easy to like the True Path. It’s very simple, fairly small, and it doesn’t take much thought to use. Better yet, it worked well for me very quickly. I’m a fan and it’s something I plan to continue to use to keep my putting stroke sharp. I’d definitely recommend checking it out if you are looking for a little more consistency on the greens. If you are thinking of trying out the True Path, I’d recommend talking to our friends at Blind9 Golf. As always, I appreciate you taking the time to read and best of luck on the course this year.