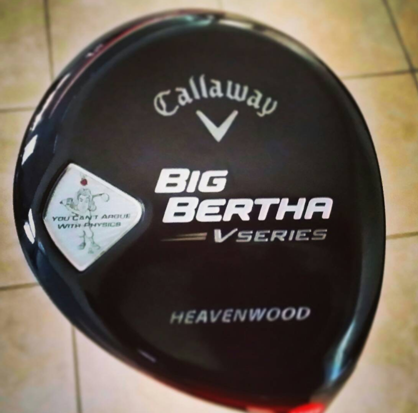 Technology Q&A is a new series in which THP will be discussing the latest products with leaders in the golf equipment industry. The hope is that by sharing this information, golfers will be able to make more informed decisions by finding out what benefits the most current equipment can offer and who it is best suited for.

We recently had a chance to sit down with Jeff Newton from Callaway Golf to discuss the Big Bertha V Series Heavenwood. This club is part of the larger V Series release, but is unique in that it is designed with higher loft and a longer shaft than typical fairway woods. Jeff discusses why it’s designed the way it is and who it is designed for in this interview.

THP: The original Heavenwood was introduced back in the 1990’s. It appears the name carried on into hybrids all the way up to around 2004. Tell us a little about that classic golf club and how it was received at the time.

Jeff Newton, Callaway Golf: The original Heavenwood had the loft of a 7 wood (20 deg) and the length of a 4 wood (42.5”) and was one of the earliest examples of Callaway thinking outside the box to deliver a “demonstrably superior and pleasingly different” product. It was unique, it was versatile, and it was extremely fun to use so I think golfers will be excited to see this modern interpretation of the original.

THP: What is unique about the Heavenwood concept and what kind of player is it designed for?

Jeff Newton, Callaway Golf: The Heavenwood gives a unique combination of distance, control, and versatility and gives golfers a great alternative to conventional fairway woods. Generally, it is designed for players who struggle to hit lower lofted fairway woods off the ground but are still looking for maximum distance.

THP: Talk about some of the modern technology that makes the V Series Heavenwood better than the original version.

Jeff Newton, Callaway Golf: The V-Series Heavenwood is powered by a forged face cup using high strength Carpenter 455 stainless steel, which makes the face significantly thinner than the original for much higher ball speeds and longer distance. The center of gravity is also considerably lower than the original, which allows golfers to launch the ball high without generating too much backspin, which also contributes to greater distance.

THP: What attributes does the V Series share with the original?

Jeff Newton, Callaway Golf: The overall size/volume is quite a bit larger, as are most woods now compared to back then, but the basic configuration hasn’t really changed much – the loft is 20.5 deg vs. 20 deg and the length is 43” vs. 42.5”.

THP: What feedback did you get from your product testers during development compared to something like the standard V Series 3w or 5w? What sort of differences were they seeing in height and distance? Was there a divide between low and high swing speed players?

Jeff Newton, Callaway Golf: The feedback has been overwhelmingly positive. In our testing, the Heavenwood was more consistent than a standard 3w or 7w while achieving distances closer to the 3w.

As with the original, the trajectory of the V-Series Heavenwood will generally be preferred by players with lower to moderate swing speeds.

THP: Was there an apparent trade-off in playability with the longer shaft in comparison to say a standard 7w or a hybrid?

Jeff Newton, Callaway Golf: There might be to a certain extent, but the Heavenwood is surprisingly versatile.

THP: It appears that for a 7 wood the head is larger in comparison to some other higher lofted fairway woods. Is that the case and if so what is the reason?

Jeff Newton, Callaway Golf: The size of the Heavenwood is similar to a 4w so it’s larger than a traditional 7w. This head size fits better with the longer length and provides the higher MOI needed for added forgiveness.

THP: Aside from the higher loft, what contributes to the club’s propensity to produce a high ball flight?

Jeff Newton, Callaway Golf: A low and deep center of gravity along with a flatter roll radius on the face also contributes to the higher ball flight.

THP: Talk a little bit about the sole design. We know it’s a modern Warbird sole and should be easier to use from any lie, but what are the specific design characteristics that accomplish that?

Jeff Newton, Callaway Golf: The modern Warbird sole features more face camber on the leading edge along with relieved portions of the heel and toe on the sole, both of which help make all the V-Series woods very versatile from a variety of playing conditions and lie angles

More information on the V Series Heavenwood can be found at www.callawaygolf.com. It retails for $239.99 and comes stock with the Mitsubishi Rayon Bassara E-Series 52 shaft. In addition, you can follow Jeff Newton at @JeffNewtonCG.