Professional golf’s major championships are considered to be the pinnacle of achievements for those that play the game for a living. Most would consider winning any major a huge achievement. There are plenty of lists of greatness for those without a major featuring the likes of Lee Westwood, Luke Donald, Matt Kuchar and Sergio Garcia.

With all of that said, the PGA Championship is still viewed by some as more of a magnified tour stop than a major championship – or at the very least, the “weakest link” in the fence that contains the Masters, the US Open and the Open Championship. 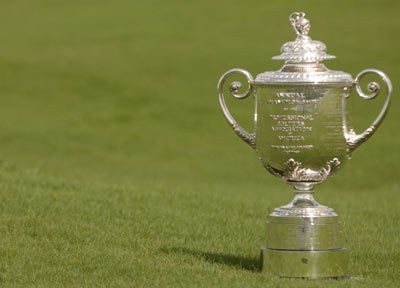 There are many potential reasons that this perception persists, one being the location (the PGA is the 3rd major in the US every year). Or maybe its legacy is dulled by the fact that the Players’ Championship and the WGC limited field events are so full of star power. Could it be the PGA professionals from around the country playing in the event give it more names that the average golf fan will not know? Maybe it’s timing, because it is the final major of the year and comes directly after the star-studded World Golf Championship just a week prior. When you look at the other three majors closer, they seem to dwarf the PGA.

The Masters – Golf’s spring time tradition like no other, held at a course that most consider the pinnacle of achievement. Ask just about any golfer about playing a course for the rest of their life and the answer is almost always Augusta National. The star of the show here is as much the golf course as it is the players trying to take home the famed green jacket. Previous winners all get invited back to a dinner where the meal is hand selected by the current champion. It has the inner workings of a secret club that gives the public a single glimpse into that life once a year and that glimpse kicks off golf season for many around the country.

The US Open – Often titled the toughest test in golf and held on some of the most famous courses in the country, the USGA traditionally sets the course incredibly difficult and par is viewed as a great score. In 2012, the winner of the US Open was 1 over par and that is not as uncommon as it sounds. The rough becomes more penal, the greens are like glass and the fairways become narrower than ever. The 2nd major of the year is as tough mentally as it is physically and the champion survives a test of epic proportions.

The Open Championship (The British Open) – The oldest of the four major championships and it’s played in the area known as the home of golf. The traditional links courses hold a mystique that many associate with the roots of the game. Normally the weather will play as large a role in deciding the champion as the course, as heavy winds and rain have been known to wipe out almost an entire field. Due to the weather and style of course, many times champions will have to work their way through the gauntlet of challenges with imagination rather than a course that sits in front of you.

That leads us to the PGA Championship. Though there is a certain level of history and the famous Wanamaker trophy that is given to the winner, there seems to be a lack of buzz heading in each year and a lack of drama heading out. While the last four champions are a who’s who of young superstars (Dufner, McIlroy, Bradley and Kaymer), the electricity that surrounds the other three majors is lacking each year at this time.

That leads to some questions. Do you view the PGA Championship as a lesser tournament, rather than an equal to the other major championships? What would you do to change the landscape and vault it to new levels? Could having the 4th major outside of the US make it more valuable or attractive? There are no right or wrong answers, but we want to hear from you. Join us in the THP Forum as the debate goes on about the PGA Championship’s place among the other majors.