Finding the best optics for golfing can be a real struggle.  Between the high prices of popular brands, comfort and fit depending on face and head shape, along with a preference to styling, it can be very difficult to find a reasonable compromise without spending a great deal of money.  For Tifosi, there seems to be a genuine interest in producing quality frames and lenses without the crazy pricetag, and making customization something that all golfers can enjoy without the additional costs. 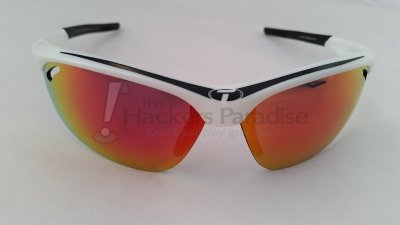 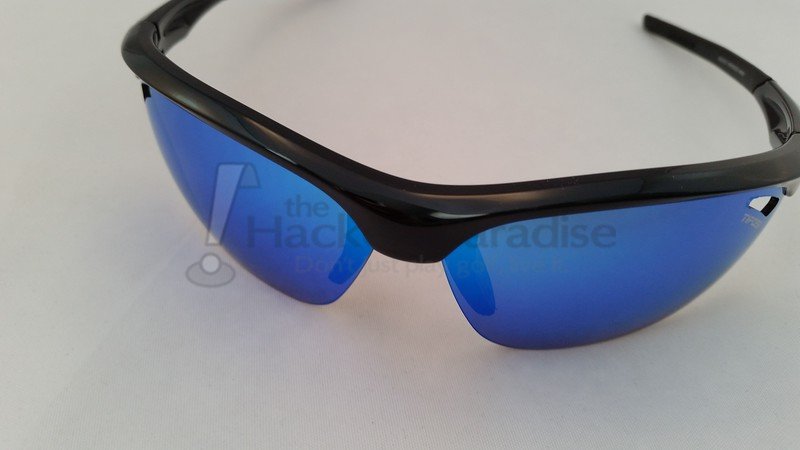 Out of the Package

The first and likely most noticeable thing about the Tifosi Veloce offering is the impressive amount of options provided to the user.  Golf/Tennis lenses along with Extreme Contrast lenses to better see the ball in the air and recognize the contours of a green, along with a unique and low light transmitting main lens that is suitable for all situations.

Second to the lens offerings is the lightweight design of the Veloce.  For anyone who plays a lot of golf, it can become rather cumbersome on the face to have a set of ‘shades’ resting on the nose for upwards of 6 hours on course.  In the case of the Veloce, low density TR-90 makes up a majority of the frame, which can stretch well depending on where the sunglasses are resting. 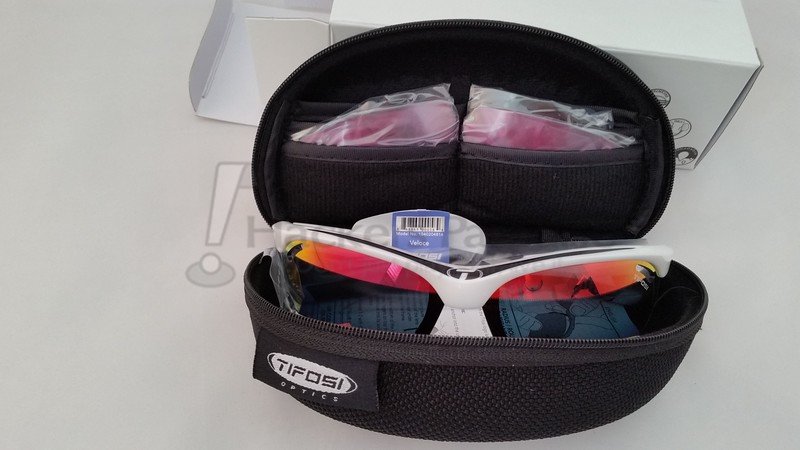 Personal preference will play a large factor in whether the black graphics and Tifosi “T” looks good on the black/white Veloce, unlike the gloss black which is simply black across the top of the Veloce.  The more subtle lines of the gloss black were a personal preference, however the graphics atop the White/black offering certainly liven the sunglasses in a more casual way.

Like with many straight lined ear sections of sunglasses, the Veloce is entirely dependent on how the user wears a hat.  During the review, the best solution seemed to be keeping the ear rest portion of the Veloce inside the hat, however it was not entirely uncomfortable to have that portion of the sunglasses resting on top of the hat either.  For the pads themselves, they have an 80% comfort ratio.  The other 20% of the time, they needed to be adjusted because they were driving into the ear a bit too hard.  This is fairly typical for a profile this narrow in that section.

The Tifosi Veloce is customizable in the nose pad however it is quite rigid, making adjustments relatively subtle overall.  The nose pad is well built and screwed adequately to the frame, keeping the Veloce close to the face at all times.   During testing, very limited sliding occurred with the gloss black frames, however it did take some time to properly accommodate the nose pad sizing on the white/black framed Veloce. 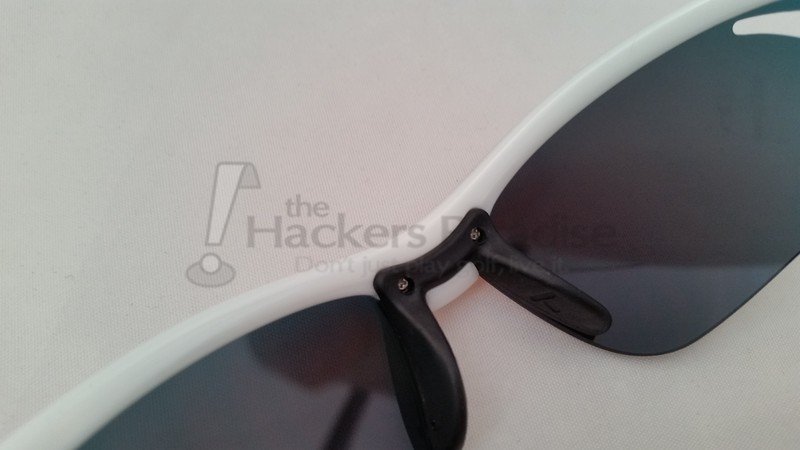 Not unlike the white lenses (for this reviewer, the first time ever wearing white sunglasses), the vented lenses took some time to separate from view.  Immediately after placing the sunglasses on for the first time, there was a very clear note of the vented portion of the lens while wearing the white/black frame with the smoke red lenses.  Initially, it seemed like a major flaw to the otherwise smart concept to allow air to flow through to that portion of the face, however it only took about thirty minutes before the vented portion blended in with the rest of the shade profile.  Upon applying the Veloce for the second, third, fourth, and tenth time, the brain did not pick up the vented portion of the lens as a ‘bad’ thing. 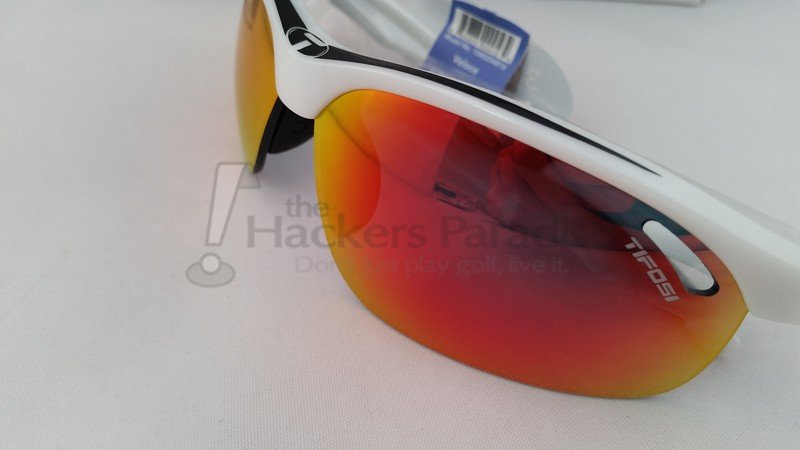 While there is definitely value in having a frame that has flexibility, there tends to be quite a bit of squeaking coming from the white/black Veloce lenses, and while at a lesser rate, from the gloss black as well.  This mostly occurs when the sunglasses are adjusted on the face, and also seems to be more frequent when the frames are cooler (example: in the car with the A/C cranked).  This does seem to be situational, as flexing the gloss black during this portion of the review writing does not generate any squeaking.  Despite the intermittent sounds, it does not generate concerns about breaking or fracturing the frame at any point in time. 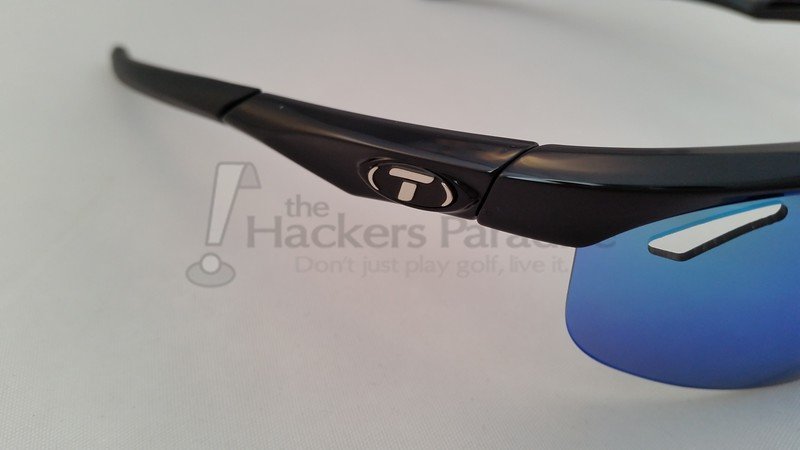 Durability, UVA protection, and a lack of sight hindering are all very important aspects of lens quality.  In the case of the lenses that can be worn with the Tifosi Veloce, here are some of the primary benefits;

If not obvious already, Tifosi seems to have taken a very serious approach to their lens functionality and quality as a whole.  With the ability to remove them easily, reviewing the Extreme Contrast and Golf/Tennis lenses were easy and enjoyable.  There was also a definitive lack of eye fatigue while out in the sun during testing, especially when wearing the G/T and Clarion Blue/Smoke Red offerings. 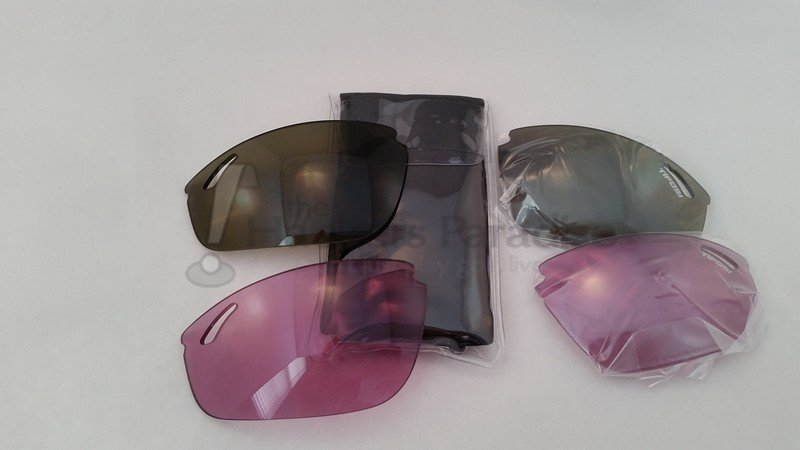 For the Extreme Contrast lens, they were fantastic during low light days, especially with clouds formed.  It made a majority of the features much more vivid (makes sense with the name extreme contrast) and made spotting the ball in the air very easy.  As these lenses are one of the higher light transmitting lenses from Tifosi, it seems to make sense that cloudier days (or even mild rain) provide the perfect setting.  Despite that, later stages of the day also seemed to accommodate the EC lenses well.

The Golf/Tennis lenses allow less light through, making them ideal for sunnier days on course.  They seemed to offer a lot of the same benefits of a typical lens, with the added improvement of being relatively easy to spot the ball in the air.  Around the green, the sheen of the green was reduced marginally, making it easier to spot the various slopes and green flows.  Whether they were wildly better than the Clarion Blue or Smoke Red offerings will likely be subject to the individual, however both offered ample protection from harsher midday sun. 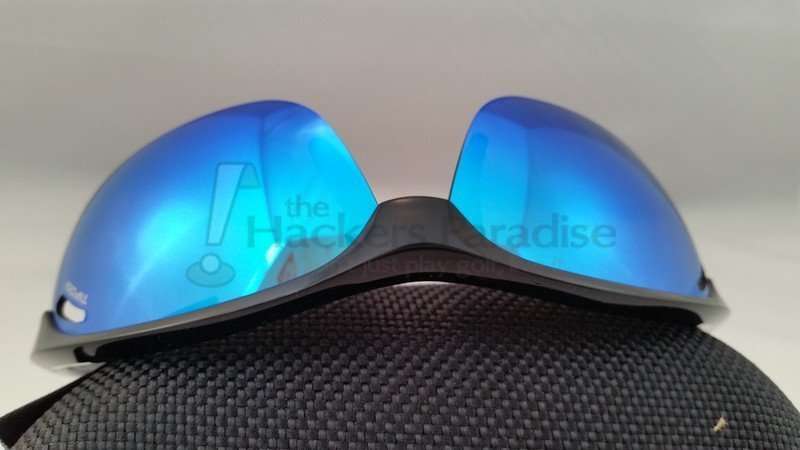 While it is extremely easy to fall under the mindset of ‘you get what you pay for’ when it comes to sunglasses, Tifosi seems to be breaking the mold by offering high quality optics at a very reasonable price.  With a variety of lens options, durable materials, and lots of customizations, golfers and active people should strongly consider utilizing Tifosi for their needs.  With their mission statement being built around the idea of creating a brand that stood for quality, style, function, and value.  For more information on Tifosi, visit http://www.tifosioptics.com.