Holding the title as Titleist’s bestselling and most popular iron, the AP1 is back with a new iteration for the 2014 season. Titleist believes that this generation of the AP1 is the longest and most forgiving iron they’ve produced, all while maintaining a style and size that will appeal even to Tour players.

Precise iron play means controlling both trajectory and distance to stop your shot near the pin. Titleist® AP irons are precision engineered for optimum flight and distance, with increased forgiveness to help you hit it close.

AP1® irons are the longest, most forgiving irons Titleist has ever made, with a multi-material, dual cavity design for players that want maximum distance, forgiveness and solid feel in a great looking progressive game improvement chassis.

MAXIMUM FORGIVENESS AP1 and AP2 irons provide the most forgiveness in the game at their tour-proven blade sizes. High density tungsten is precisely placed low in the toe (and co-forged into the heel of AP2) of the long and mid irons to create high MOI that drives higher ball speeds across the face for more consistent distance on off-center hits.

SOLID FEEL through the set from the progressive CG (lower in the long irons). Smooth turf release from the camber sole with pre-worn leading edge. 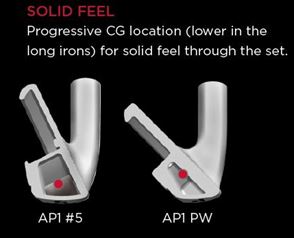 STOCK SHAFTS AP1 stock shafts feature two high performance, flighted designs to match the flight goals of the new irons. The True Temper XP 95 features a flighted launch with great feel and is 15g lighter than the stock steel shaft in the 712 Series. The Mitsubishi Kuro Kage 65 is a lightweight graphite shaft with higher, flighted launch and great feel. 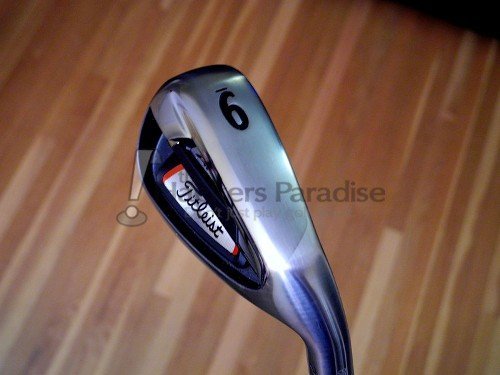 Before delving into the physical characteristics of the 714 AP1’s, a short note about the makeup of the set is in order. Titleist wanted to create flatter launching and longer flying short irons, and as such, strengthened the lofts one degree starting with the 7 iron. Due to this, they felt the need to offer two gap wedges, one at 48° (W) and the other at 52° (W2). The idea behind this was to make sure gapping was unaffected with the loft changes, while still offering the same easy to hit profile well into the bottom of the bag.

The AP1 has the most modern or aggressive cavity badge of the 714 iron series, yet it still maintains a fairly refined look with classic script lettering and the silver, red, and black Titleist color scheme. While not all that unlike the 712’s badging, it is a fine progression. However, the new brushed satin finish on the top line, sole, and face of the 714’s is a complete 180° from the previous generation’s shiny chrome finish, and in our opinion, it is a big improvement both visually and functionally (due to lack of glare). 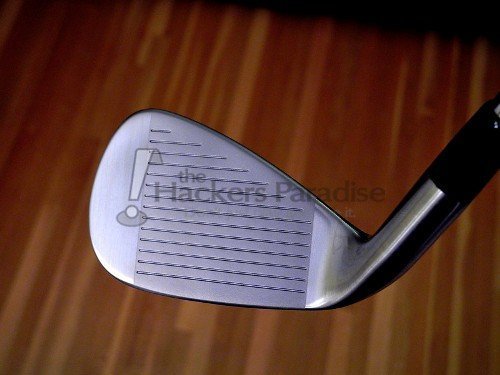 While the AP1’s are the largest irons in the 714 series, and are very much game improvement irons, they offer slightly smaller blade sizes and a little less offset than many others in their class. When compared against another 2014 game improvement iron, the TaylorMade SpeedBlade, they are a smidge shorter heel to toe and a little less offset. Though the differences are small, they are evident at address and will be appreciated by many. Still, these irons are by no means small or sleek, and will offer a nice confidence-inspiring look for those players that enjoy some help when they miss the center of the face. Progressive sole widths (and some beveling) and top lines give a more streamlined look in the scoring irons, while the long irons appear to be built for high launch and maximum forgiveness.

Titleist uses the word ‘solid’ over and over again when describing the way the AP1’s feel and it seems as if they are on the right track. Center impact produces a slightly muted (e.g. soft-ish) sound, but solid is definitely a good descriptor. The larger size and cavity badge do well to keep them from being harsh on mis-hits, but in general, it was easy to figure out where the ball hit the club face.

In all, the 714 AP1’s offer a refined game improvement profile that should appeal to a wide variety of players, even including professionals (as evidenced by Ben Curtis on the PGA Tour). 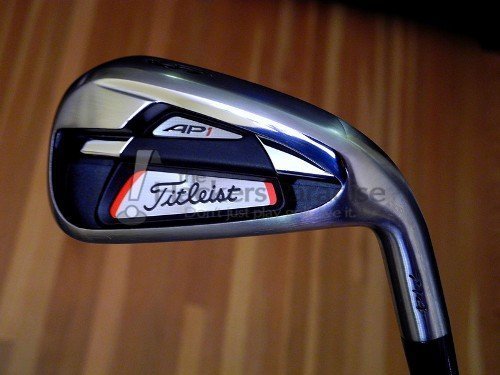 The 714 AP1’s were tested on the golf course, the driving range, and using a Vector X launch monitor. Because Titleist requests fitting specs from reviewers, the set tested was 4-W with KBS Tour shafts rather than the stock XP-95’s.

Admittedly, without the flash and (at times) grandiose claims that we see from other companies, expectation in this performance category were not sky high, but the AP1’s exceeded expectations. Launch conditions measured on the Vector X matched or bested all the other irons that have been tested in the last year.

Launch monitor testing takes many variables of out of the equation of course, but the AP1’s proved to be longer than expected on both the driving range and golf course as well.

With the KBS Tours, the AP1’s offered a combination of mid/high launch and mid/low spin that combined with the higher ball speeds to produce a high shot that wasn’t prone to ballooning. Maximum ball height ranged in the 90-100 foot range on well struck shots.

Titleist advertises CG progression as a way they help players achieve desired trajectory, and testing showed the AP1’s performed very well here. An increase in distance in the scoring irons was very appreciated and flowed nicely into the higher launching (but still quite long) long irons. 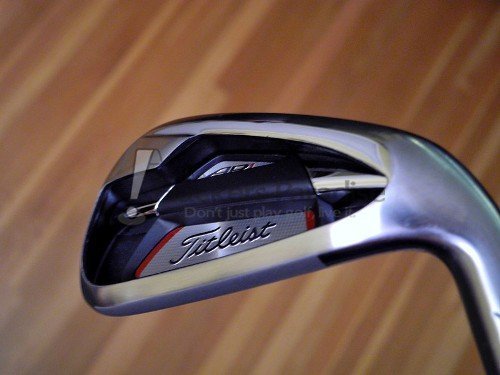 The AP1’s deep undercut cavity and tungsten toe insert (in the mid and long irons) combine to create a competitively forgiving package. Lower toe misses in the mid and long irons showed a moderate loss of ball speed and slightly lower spin on the launch monitor, while maintaining launch angles quite well. That all came together to produce a shot that fell short of perfect, but was still quite reasonable for the miss.

On-course testing showed the AP1’s had a remarkable ability to hold the line on toe misses. Rather than the expected (and at times score killing) directional miss, toe shots often stayed mostly straight, but of course, short of the intended distance.

This is a set that should be playable by a number of different skill levels, from low to high handicaps. Higher handicap players should find the irons easy to launch and adequately forgiving, while the better players will appreciate the slightly streamlined appearance and reduced offset (compared to others in the same class). 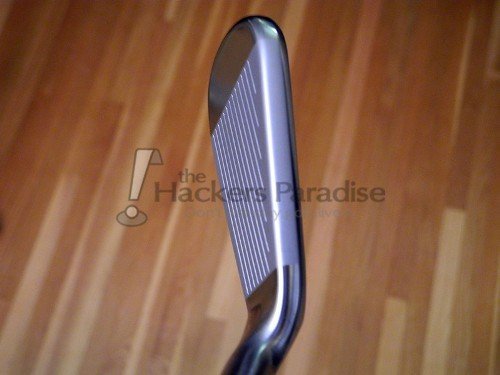 Luck (or lack of luck) had it that much of the AP1’s on-course testing took place during extreme conditions, including one round with steady winds in the 35mph range. This was a great opportunity to see how the irons handled attempts at trajectory manipulation, and they passed with flying colors. While possibly not on the same level as the smaller profile irons in the 714 series, the AP1’s did allow for relatively easy flighting of the golf ball. In addition, low draws and even a fade (no small task for this golfer) were possible to produce with the right technique.

The 48° gap wedge proved to be a great addition to the set and was an extremely versatile club. Since it possesses the same build as the rest of the irons, it is forgiving and easy to use for full swings. At the same time, it also functions nicely as scoring club for partial swings inside 90 yards. While it may not be the most versatile wedge on the planet, its design fit perfectly into the gap that it filled.

While lacking some of the drop-dead sexiness that the rest of the 714 iron line has, the714 AP1’s exhibit a refined example of long and forgiving, which is surely a reason they are the most popular Titleist iron in terms of sales. The fact is many golfers want to be longer and straighter, even when they miss the center of the face. It was mildly surprising to see just how well the AP1’s stacked up against the competition, especially with the slightly smaller profile they possess. The 714 AP1’s are competitively priced and as always, THP suggests taking the time to seek a fitting to get the most for your dollar. More information can be found on Titleist’s website, www.titleist.com.