In today’s golf equipment market the going trend is clearly toward more elaborate and “out there” names to try and catch the eye of the consumer in any way possible. However, there are a few stalwarts out there still dedicated to tradition and simple evolution in their product lines. One such company is Titleist. With the new year approaching, the company is bringing new irons to market, but in the same names golfers have come to know like the AP1 and AP2 irons. THP was fortunate enough to get the chance to put one of those lines, the 714 AP2’s through their paces to see if the same name meant the same performance.

For the purpose of this review THP was sent a 3-PW set of the Titleist’s new 714 AP2 irons. Because Titleist strongly believes in fitting, this set was paired with KBS Tour shafts in stiff flex.

Precise iron play means controlling both trajectory and distance to stop your shot near the pin. Titleist AP irons are precision engineered for optimum flight and distance, with increased forgiveness to help you hit it close.

The AP2 line from Titleist has traditionally been a very classy looking iron set, iteration after iteration. Instead of making any drastic changes with the new 714 AP2’s, Titleist has taken the cavity back profile and classic chrome looks we have come to recognize and given them a few simple tweaks in both design and finish. After all, sometimes it isn’t the large changes that make or break aesthetics – it’s the subtle ones. 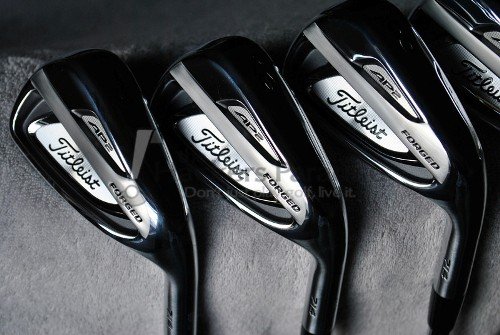 From an aesthetic design standpoint the AP2 irons continue to blend qualities from both game-improvement and players irons into one singular design. The irons possess a balanced look with a more compact heel to toe length than many pocket cavity irons on the market and also maintain a marginal amount of offset and smaller topline that lower handicap golfers typically enjoy looking at. Where the 714’s separate themselves from their predecessors in this department is with a larger focus on progressive sole thickness and widths as well as overall weighting. All of these things are minor tweaks from the 712 and 710’s, but undoubtedly very calculated ones. 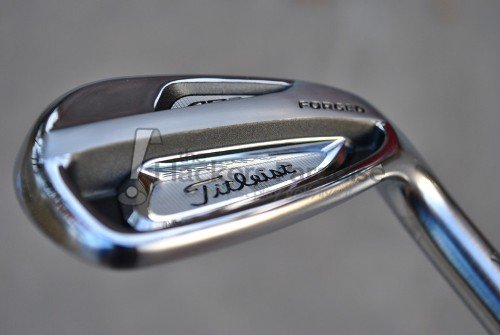 As far as the overall finish is concerned, these are certainly among the best looking pocket cavity irons that have ever been brought to market. The evolution to balance the traditional polished chrome look that Titleist is known for in the cavity and sole by adding in the satin chrome along the topline and face truly makes the iron demand attention in hand, in the bag, and at address. Combine that with more subtle changes like using black Titleist scroll work on a silver cavity badge like with the original AP2 in 2008 (as opposed to the silver text on black which was used on the 710 and 712 AP2’s) and the overall look manages to both stand out as traditional and different at the same time. 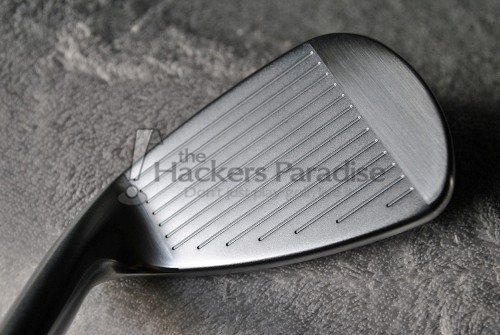 With the 714 AP2’s Titleist has continued their use of a multi-material head design and this has a direct correlation to their ability to progressively manipulate the center-of-gravity throughout the set. They are also combining the movement of CG with variable face thickness in order to hit what they consider to be optimal trajectory and launch characteristics. Essentially, Titleist moved the CG lower in the longer irons and paired it with a thinner face for higher launch and carry while moving the CG a bit higher in the shorter irons and pairing that with a thicker face for a flatter overall trajectory to prevent ballooning. 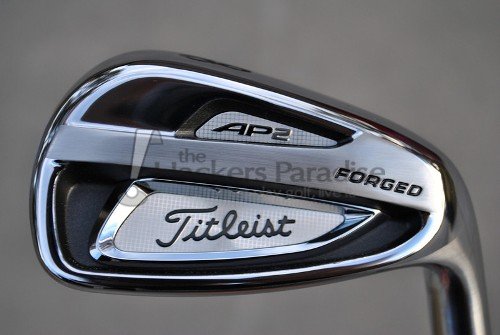 During testing these claims were definitely noticed, as the longer irons proved to elevate the ball much more consistently, which allowed for some very solid carry distances both off the tee and the turf. The scoring irons still possessed a very nice overall ball flight height, but did so at an arc that was never in danger of ballooning. Despite being a touch flatter, the amount of spin that these shots had into the green might have been the most eye opening aspect. Typically when we as golfers think “flatter” we assume lower and harder to hold greens, but the 714 AP2’s certainly disproved that again and again.

Titleist sought to provide distance in the new AP2’s without sacrificing workability. The main agent of doing so lies with the position of the tungsten in the irons to alter the CG as mentioned earlier. However, it is worth noting as well that the 714’s also possess a 1-degree stronger loft in the 6-PW than the original AP2’s, the 710’s and 712’s before them did. Launch is everything when it comes to irons, but it is nonetheless interesting to see Titleist move a bit from the same lofts they have used in this line since 2008. 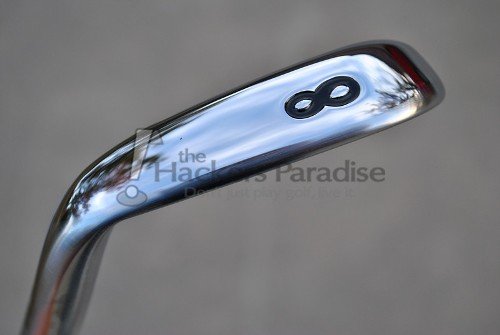 On the course where distance is concerned the 714’s definitely walk that line between a traditional player’s style iron and more distance driven game-improvement models. The 714’s provided a surprising amount of distance throughout the set in all full swing situations from a Titleist iron and most certainly more than in the AP2 versions before them.  Another important thing to mention in this area however was the consistency. Even with the focus on bringing more distance to the table, Titleist has managed to maintain that consistency with which many amateurs always applaud their irons for. From iron to iron the gapping was spot on with no “grey” areas that could be cause for concern. Although they may not be as long as many of the true “distance” sets out there the 714 AP2 irons are another example of just how far companies have come at creating a nice middle ground in player’s irons.

The dual cavity design and variable face technology used in the AP2’s are intended to increase MOI across the face (particularly in the longer irons) to maintain as much ball speed as possible on off center hits. The largest portion of forgiveness was actually seen off of the toe as opposed to heel side and lower on the club face. Being that the dominant miss by most amateurs is out on the toe, this was nice to see. However, make no mistake that this is a set of irons that will not be a band-aid for major misses. Even with all of the weight movement and CG positioning companies can devise it has to be remembered that there is only so much forgiveness that can be packed into a player’s style iron like this. That being said, a golfer with a repeatable swing will find ample forgiveness in this sleek package. 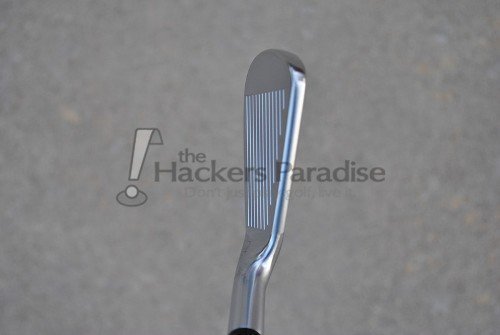 One of the benefits to not being a larger more forgiving design is that the irons retain an impressive amount of versatility and opportunity for the precise shots that many associate with the Titleist name. Throughout the set, the irons provided the ability to turn the ball either way as well as flight it up and down as necessary for the varied situations on the course. Additionally, Titleist has employed a sole with a “pre-worn” leading edge and rear bevel that really seem to let the irons take a very clean divot from the short grass, yet still enough to drive through after the ball in the rough. After a lot of time with the irons it is very clear that from a versatility standpoint the 714 AP2’s can hit whatever shot necessary, providing that the user has the technique of course.

One of the major features touted about the AP2 line has always been the fact that they are forged irons and with that comes the connotation by many of “soft feel” on well struck shots. However, Titleist irons, although forged traditionally, have a much more solid sound to them on shots, and the 714 AP2’s are no different in that department. The pitch given off by the irons at impact are more of a click than most pocket cavity irons on the market and will certainly take those who have not hit Titleist irons before by surprise. In no way is it a harsh sound that takes away from the overall feel, but rather it is just a higher pitch than some might expect.  There is still ample feedback given on shots across the face that lets you know when you catch the ball thin, high, toe-side, or heel-side both in the sound and the vibration feedback given to the user.

From an all-around perspective the 714 AP2 irons are yet another solid entry into the players iron segment of the market. With that being said, they are definitely more of a subtle evolution on previous versions rather than being revolutionary. Make no mistake though, along with being some of the best looking irons Titleist has put out, they also offer solid distance with a bit more forgiveness packed in there than we are used to with an iron in this particular profile. The ability to take what works and continue tweaking it over time is something Titleist is well known for and the 714 lines of irons are clearly no different.

The 714 AP2 irons are available in 3-PW and also have an additional gap wedge option as well. More information on the AP2’s can be found at www.titleist.com.