Although the last couple of years have brought us an onslaught of fairway woods designed for max distance, one company, Tour Edge, has been doing that very thing with their Exotics fairways well before it got trendy. In fact, it is not an overstatement to say that their TEE fairways are their flagship product, much like hybrids are for Adams. Always with an emphasis on technology and keeping playability with the workability, the new Tour Edge Exotics E8 Tour fairway is bringing more tech and added adjustability into the equation. 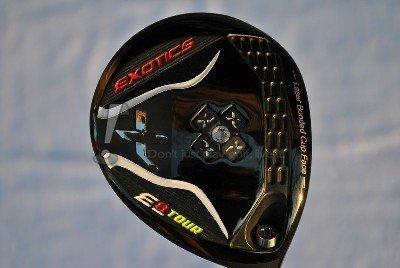 The all-new Tour Edge Exotics E8 Tour adjustable fairway wood delivers an unsurpassed level of excellence. The E8 Tour combines a tour-inspired design, a state-of-the-art manufacturing process, upgraded materials – and all with more loft adjustability options than the competition. Featuring loft options from 12 to 15.5 degrees along with 13, 14 and 15-degree options with a more upright lie angle, this level of versatility allows players to dial in the ideal ball flight with the E8 Tour. Add Exotics legendary power and distance, and the E8 Tour fairway wood becomes the ultimate players’ weapon.

The compact and powerful 150cc club head appeals to players’ sensibilities, and in true Exotics fashion encompasses brand new technology. Exotics fairways woods are available in the most popular shafts on the market, and that trend continues with the E8 Tour. The next-generation Diamana™ +Plus Series shafts come standard in the new E8 Tour fairway woods. The Diamana +Plus Series build on the success of its 2011 predecessor. The new series has multiple bend profiles, features an adaptive balance point system, M.D.I. Technology and the ToughQure™ resin system. The E8 Tour fairway wood comes standard in the M+ or S+ series – D+ series is available as a custom option.

With the feverish pace we are seeing technology being implemented into golf clubs, it is always fun to focus in on some of the “major” examples from each release and break them down a bit more. For the TEE E8 Tour Fairway woods, the new “Tour Inspired” versatility and the Laser Bonded Cup-Face are definitely worth taking a more detailed look at.

New for Tour Edge this year in the E8 Tour is the addition of an adjustable hosel. While this isn’t necessarily revolutionary with so many companies having already embraced it, for Tour Edge they were seeking some specific options to separate themselves. To do this, their adapter offers loft settings from 12° to 15.5° as well as three upright settings. The goal here isn’t only loft manipulation but also ball flight manipulation for those looking to fine tune things. The E8 Tour (and the E8 Beta) also both have adjustable weighting in the center of the sole, though the weight kit is not included (sold separately by Tour Edge).

Testing showed that the hosel does as it claims in terms of the face angle and loft changes which take place after adjustments. Ball flights were altered, though it should be kept in mind that a 12° fairway in a “players” size profile like this certainly won’t be for the faint of heart. Additionally, the hosel adapter was a bit difficult at times in terms of getting it to insert properly into the head thanks to the very snug fit. Also, it only takes three turns of the torque wrench to install and remove the screw from the adapter, and while it had no issues in copious amounts of testing, it’s interesting to see an adapter that screws in so shallow compared to pretty much every other option on the market. In the end though, it’s nice to see TEE making the foray into adjustability in at least one of their fairway offerings.

The largest amount of tech in the E8 Tour fairway is definitely in the face of the club. The E8 is a bit different in that it is utilizing a 475 Carpenter U.S. steel to make up the cup-face. What really makes this unique though is the bonding process that Tour Edge has used. They have always been on the cutting edge with their “combo brazing” method used in other models, but here they are using a 360° laser bonding process they claim has never been used in US market club before. Basically, the laser is much more precise and operates at a lower heat, which means smaller bonding points and a more rounded joint, which should make the face retain and transfer as much energy as possible to the ball. Though it will be talked about in more detail later in the review, the TEE E8 Tour was easily one of the longest fairway woods this reviewer has ever tested on center strikes. The technology here without a doubt has a performance merit.

The E8 Tour fairway is joining in on the growing trend of going matte in its finish scheme, and the matte black looks very good on this head. As has become tradition with any of the Exotics lines, the emphasis on the head aesthetically speaking is put into looking edgy when compared to a lot of designs out there. The sole shows this with the E8 Tour and its dimple filled compression channel, logo embossed weight port, and use of red and fluorescent yellow paintfill are a stark contrast to the matte crown that doesn’t even feature an alignment aid. 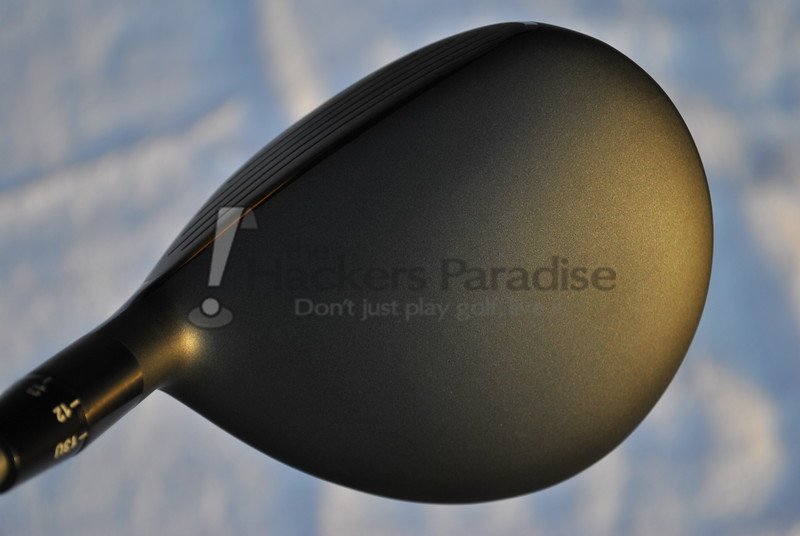 The head itself shows TEE’s emphasis on being more of a “players” inclined fairway wood with a small 150cc size and a face certainly more on the shallow side than the current trend with many manufacturers. Additionally, the shape itself is quite round, particularly out on the toe section, and cuts back into the face which is shorter heel to toe than a lot of releases we see. The shape isn’t by any means bad, but it is certainly different enough that some will be drawn in and others possibly put off a bit. In the end though, even with the extremely round nature of the design, it comes down to the fact that the eye test makes it clear there is a level of demand here with this fairway that should be noticed. 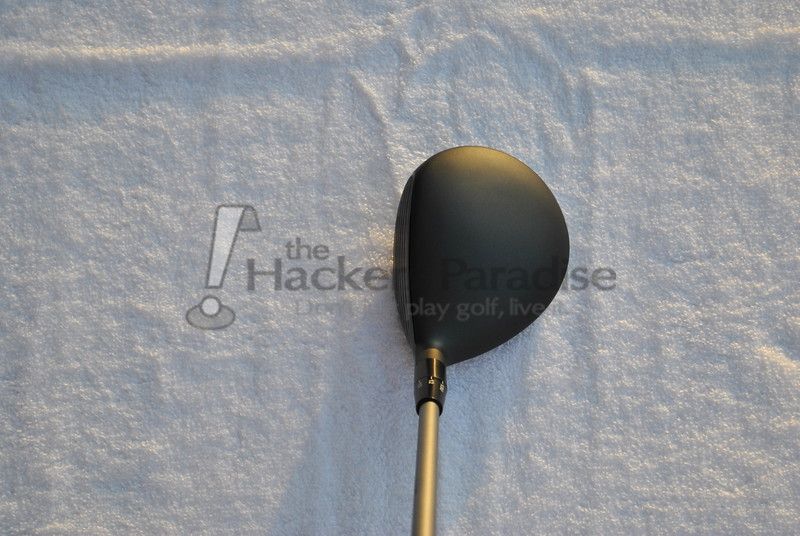 THP was sent the Tour Edge Exotics E8 Tour 3-wood paired with the 2015 Diamana S+ 60 to spend time with for detailed review. The club was utilized in a variety of settings and situations in order to get a complete feel for its overall capabilities.

The E8 Tour keeps in line with previous offerings from the Exotics line where sound/feel is concerned. There is a slight metallic ‘tink’ at impact, but it is very solid with no hollow nature to it. It’s really a very good sound that makes the user feel like a lot of energy is being transferred to the ball. Misses can be identified heel/toe by the sound change, but also the physical feedback to the hands. It’s not a twisting or shuddering feeling, but just solid tactile feedback. Overall, there isn’t a lot of surface area for misses to take place on the face, so you won’t hear/feel the extremes in the same manner as a lot of the bigger face fairways out there. Even then, there will be more than enough feedback for the type of player the E8 is aimed at. 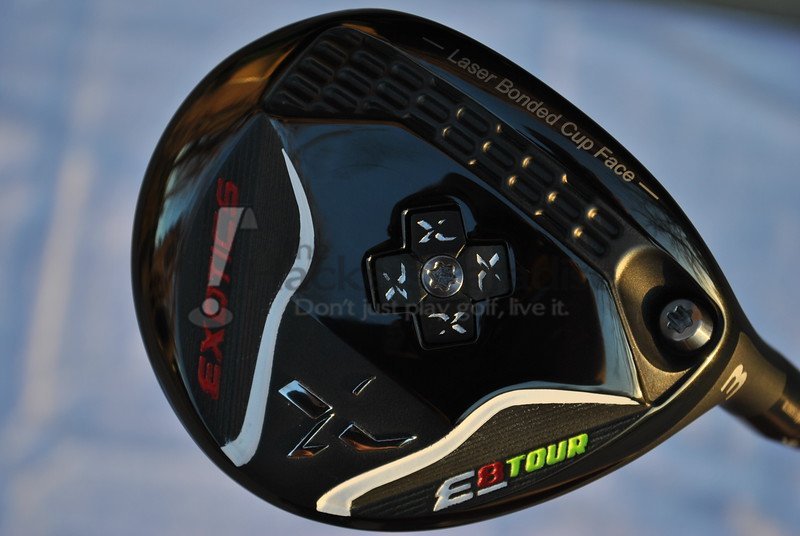 With the E8 Tour, the company put focus on moving the CG both closer to the face and higher in the head with the intention of dropping the spin and keeping the launch up. Tour Edge also makes it clear that these traits will be optimized in the E8 by those with stronger swing speeds, so it is very clear who the key demographic with this head is. Testing showed the E8 Tour to have a higher ball flight both off of the tee and deck than was anticipated. Off of the tee the E8 in its standard loft setting (15°) was a high launcher of the golf ball. From the deck the ball flight still kept an easy elevation up to what most will classify as a mid-high flight. Based on the smaller profile, the head paired with the Diamana S+ 60 producing the flight it did was definitely a bit of a surprise. 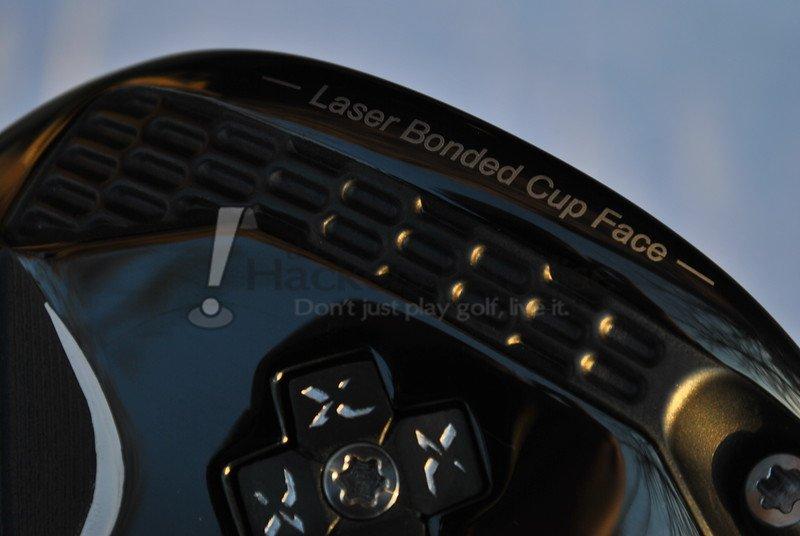 The club reacted accordingly in terms of ball flight when the loft was adjusted, though there are definite changes to the face angle as was discussed earlier in this review. This reviewer found that trajectory could be manipulated with the E8 Tour, but due to the face depth this is going to be somewhat limited depending on skill level and swing repeatability. Where the workability of the design was concerned, the ability to turn the ball over and work fades/draws is certainly there, which is right in line with what one expects from a more compact “players” type design. 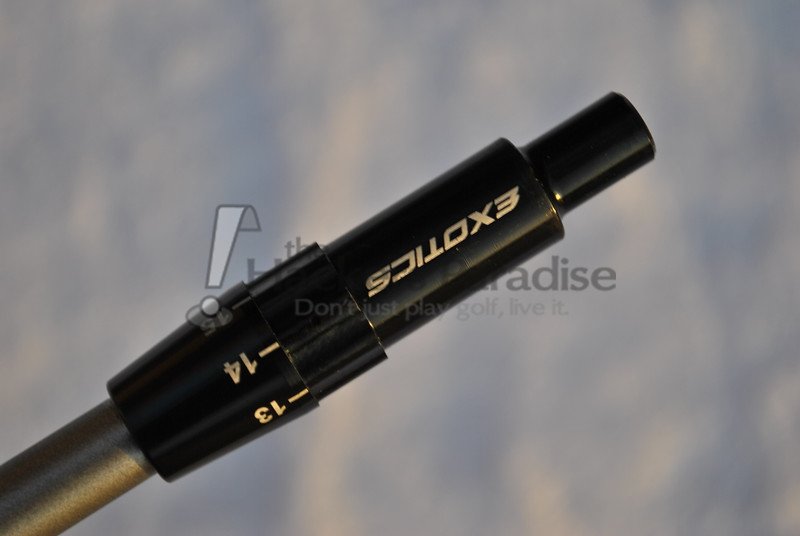 When you talk about an Exotics fairway wood, there is one particular part of the conversation that is always at the forefront – distance. Tour Edge doesn’t shy away from their desire to produce the longest fairway woods on the market and they were pushing distance fairway woods before they were the trend like they are now. With the E8 Tour, this reviewer found it to be the longest fairway wood he has tested this year with ball speeds exceeding other models by a decent margin. Simply put, off of the tee the distance was impressive. In fact, ball speeds recorded during testing encroached on driver level. Off of the deck, the elevation of the model makes its distance there formidable as well, but as with any 3-wood, success hitting into a green with it will vary on the situation and skill level. 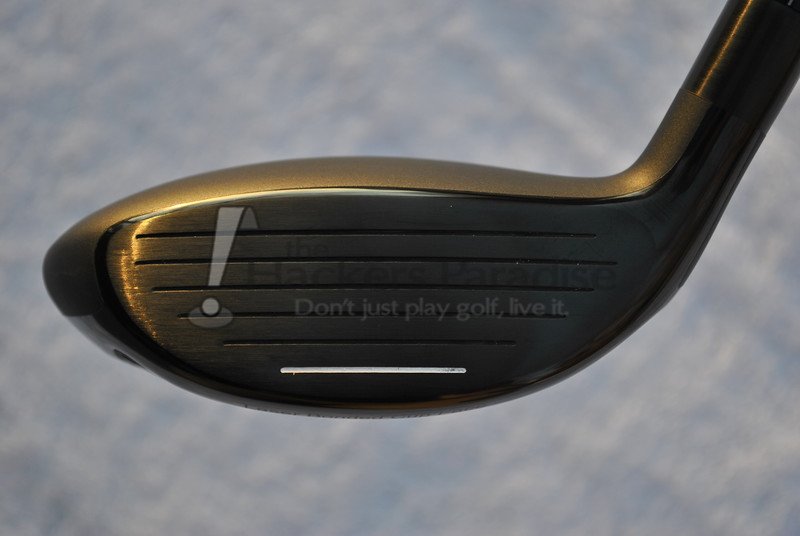 Though the E8 Tour shines most in terms of distance off of the tee, the profile needs to be brought up again, as it will be quite demanding for many amateurs. Ball speed retention across the face maintained good numbers in terms of dropoff and the stability of the design with that extremely rounded toe section limited the gear effect much more than expected for a club of this footprint. That said, the issue for many will be that the face itself will pose some limitations for higher handicaps compared to the deeper faces and larger footprints some OEM’s are producing. However, the E8 is aimed at a player who prefers a smaller profile and has no trepidation when it is set up behind the ball. For those golfers, Tour Edge has once again produced an incredibly capable Exotics fairway wood that deserves a hard look and will stand up with any other offering on the market. 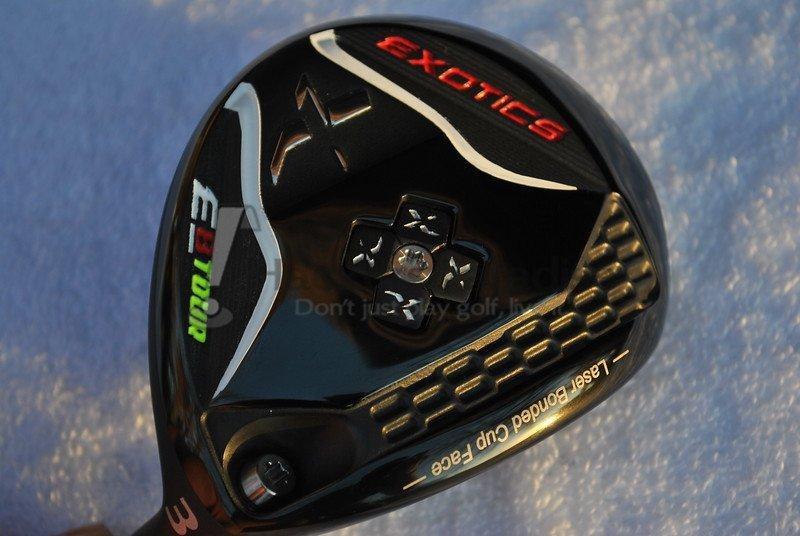 Tour Edge consistently shows that they know exactly what they want to accomplish with their fairway woods and the type of golfer they are designing them for. The Exotics E8 Tour model continues that mindset and steps it up with even more technology both in material/application as well as introducing the adjustability many golfers seek all rolled into an explosive “players” profile fairway. Although the design itself may not be for everyone, the performance cannot be denied and delivers on the hype. The issue with any of the Exotics line will undoubtedly be finding them to try out and then not being deterred by the rather hefty price point they carry.

The Tour Edge Exotics E8 Tour fairway wood is priced at $349.99 and more information on it and the rest of the E8 line can be found on their website www.TourEdge.com.