It would be a pretty safe bet that most golfers around the world have at some point tried Dynamic Gold shafts. In fact, to say that the “Dynamic Gold” name is synonymous with iron shafts might be selling it short, as the DG line from True Temper has been around for more than 30 years. Just as True Temper touts, they are the number one iron shaft in golf by use.  However, the increase in technology in recent years has led to an explosion of iron shaft R&D, a much more competitive atmosphere, and an assortment of new options on the market. With so many new options around and the DG line standing firm, it has come to draw increasingly varying opinions. It is for that very reason that when I found out I would be reviewing the True Temper “DG Pro” S300 iron shafts I had the thought of “Oh, just another DG shaft”.  I can honestly say that thought couldn’t have been more wrong.

Information from True Temper on the DG Pros 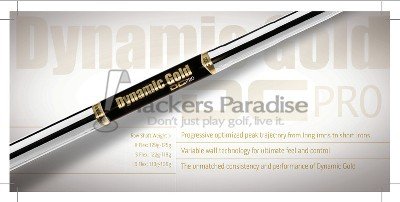 First shaft ever to feature an optimized step pattern that visibly transitions within the set: 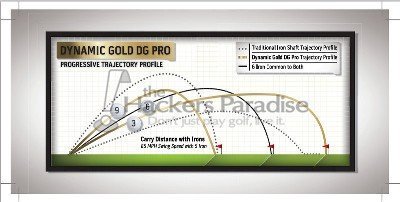 As I alluded to earlier, when finding out I would be doing the review on the DG Pros, I was hit with a bit of a “ho-hum” mindset initially. I know that might not sound fair, but because I played Dynamic Gold S300’s in my irons forever, I have developed some distinct thoughts about them. Plus, in today’s market it can generally be expected that when a company adds “Pro” to something’s title it is either a re-hash or a minor tweak.

It wasn’t until I tried to do some research on what I was about to embark on reviewing and found absolutely nothing (other than a mention on Twitter) about them that I began to be intrigued about the unknown. However, what really piqued my intrigue was opening the box to see a step pattern unlike anything I have ever seen. 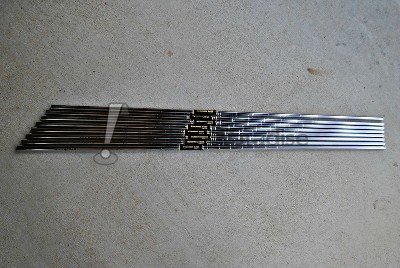 The step pattern of the DG Pros is incredibly unique in both the staggering and the varied tip sections. It was at this point that I made another assumption, “Oh, they made the S300’s flighted”. I was wrong again. Yes, as mentioned earlier the DG Pros do have what some would consider “flighted” characteristics, but rather than manipulating the kick point like a traditional flighted approach, the DG Pros instead use the tip-section of the shaft to accomplish what they refer to as a “progressive” iron shaft.  Essentially, the flight is controlled through the set by utilizing stepping patterns that are progressively adjusted in length to alter the tip stiffness as you move from the long irons (softer tip for higher launch) to the short irons (stiffer tip for flatter trajectory). 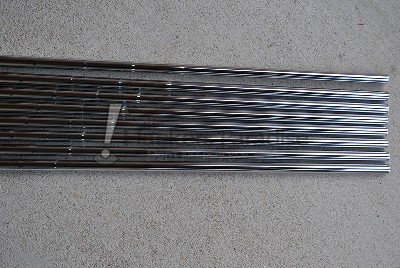 Another widespread thought about Dynamic Gold shafts is that very little feel exists through the swing compared to other iron shafts and I will openly admit to falling into that realm of belief. I expected that to stand true with the DG Pros as well, but I was wrong again. From the very onset of my time with them, up until putting my findings down here, the feel of these shafts was what perhaps stood out the most. It is so unlike what one expects from a DG shaft. 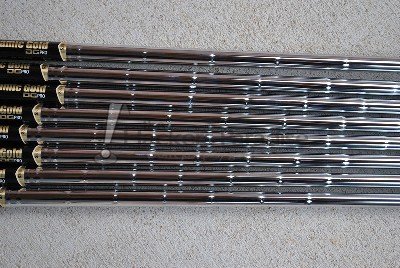 Essentially, what it comes down to is that despite utilizing a classic namesake, these really are a different animal. The breakdown of technology above points to that, but the performance is what solidifies it. Since the shafts are designed for progressive flight, it makes the most sense to also break down the feel and performance of them the same way.

The long irons are the least tip stiff of the DG Pros. This is to encourage a higher trajectory, since most golfers struggle to launch these clubs as high as they do the shorter and higher lofted clubs. Additionally, the higher launch should lead to more overall carry and less rollout than standard setups.

In this particular portion of the iron shafts, the smaller steps down to the longer (and softer) tip section are quite apparent through the swing. You can truly feel the shaft unload and kick through the zone. I want to make it clear that it is not a harsh thing here; the feel is actually very nice and enjoyable. It simply took me (and others that tried them) by surprise compared to what I was used to.

The intention of this section of the DG Pros is to provide a higher trajectory and they really do accomplish this thanks to the progressive tip stiffness. Time and time again it was quite evident that I was able to launch long irons better than I typically do. The most impressive part to the higher trajectory was being able to hold greens with a 3-5 iron, as it has always been something that myself (and most amateurs) tend to struggle with. Though the words “higher” naturally bring concern to some over loss of distance and dispersion, the S300’s still maintained a penetrating flight arc throughout. It is also worth noting that even with the higher launch characteristics there were no issues at all with flighting this portion of the DG Pros down when need be.

The mid irons have increased tip stiffness through a shorter tip section and slightly longer lower steps to encourage a more “standard” trajectory, as these are the clubs that most golfers have the most consistency in their flight.

With the increased tip stiffness here compared to the 3-5 irons there is a noticeable difference in feel of the shafts. The feel is akin to what you get from the long irons and you can still feel the shaft load and unload, simply not to the degree of the longer irons.

If I was going to compare the DG Pros to the original Dynamic Golds it would be in this portion of the shafts. The fact is that in my time with the shafts this 6-8 mid iron section performed very close to what I am accustomed to seeing out of their namesakes. Time and time again I saw a penetrating flight from a solid launch that lead to very nice dispersion, and most importantly, consistency of shots.

The short irons of the DG Pros are the most tip stiff of the iron shafts thanks to the larger steps they possess leading into the even shorter tip sections. The stiffer tips are intended to provide a slightly flatter trajectory than typically seen in the scoring irons to prevent ballooning.

The short irons in the DG Pro shafts are without a doubt the most subdued of the set as far as feel is concerned. It most certainly does not mean that they lack feel, but the increased tip stiffness in these irons just leads to a noticeably different feel than that of the long or mid irons. The shorter and stiffer tip section just is not as active feeling through the swing.

I was most concerned about this portion of the DG Pros “progressive” nature because when talking about lowering the flight of your scoring irons you cannot help but immediately think about how it affects your ability to hold the green. The purpose is obviously based on the belief that many golfers will actually lose some distance off of the shorter irons due to too high of a flight. What I saw were short irons that held into the Oklahoma wind better due to the lower flight, but still had no issues holding greens on both windy and calm days.

The most poignant thing that can be said about the DG Pros is that just because they share the same moniker as the original Dynamic Gold shafts we all know so well (for better or worse), they most certainly are NOT just a rehash of them. These shafts are a breath of fresh air from True Temper and that is something we have not seen in some time. The bottom line is the DG Pros are a unique take on variably flighted shafts that works and works quite well. Although they won’t fit everyone (as with any shaft), I really do think there are a large portion of golfers that could benefit from the progressive flight that they offer through the variable tip stiffness of the set.