This year, UST Mamiya is releasing the newest addition to their Elements line of shafts – the Chrome. In what is definitely a visual departure from the previous shafts in the line (Earth, Wind, Fire, and MK), it is also what they consider to be their most advanced, as it features the results of over 22 years of technology rolled into one shaft.

THP was able to spend time with the Elements Chrome 65 F4T, and for this review it was played in a Cobra Bio-Cell driver.

Recoil Technology optimizes the spring effect and promotes the highest and most efficient energy transfer from butt to tip to maximize ball speed and reduce ball dispersion.

The Elements Chrome is the first non-iron shaft in UST’s lines to feature the Recoil Technology, with the performance that has been seen due to this tech, it was just a matter of time before it was utilized elsewhere as well. The essence of the Recoil Tech is that by placing a large amount of layers within the shaft the actual energy transfer is harnessed throughout the swing from the hands to the head rather than “leaking” power through the flexion and possible deformation that other shafts can be subject to in the swing. Basically it is gaining performance through increasing efficiency.

Variable Wall Thickness within each section of the shaft for enhanced feel and better control and accuracy.

By varying the actual thickness of the shaft in different sections the actual feel and overall accuracy of the shaft can be further tuned than in a shaft with the same wall thickness throughout. This has traditionally been most talked about in steel shafts but the addition into the Elements Chrome in combination with the Recoil layering process makes for a very interesting application as it pertains to the overall feel and precision of the shaft.

Typically graphite shafts are heavier in the tip section in an effort to increase accuracy and also manipulate launch angles. However, heavier at that portion of the shaft can also lead to a greater feeling of trying to swing the head of the club (increased swing weight) rather than swinging from the grip and allowing the club to work through the swing. With the Chrome, UST’s solution was to counter-balance the shaft by having more weight towards the butt section in order to maintain a lighter swing weight with the heavier heads we are seeing on the market right now.

The Elements line from UST has always been known for flashy colors of lime, purple, and so on, but just as much as the performance, that all changes with the release of the Chrome. This is a shaft that aesthetically lives up to its name, with the same smoky chrome-like finish that we have seen in the Recoils starting in the tip section and eventually fading into a nice pearlescent white. Additionally, the shaft features plain stated lettering and a nice touch in the form of an “elemental” design with the symbol for Chromium (Cr) on it as well. The goal was to produce a shaft that would blend easily with any of the flashy colored heads we are seeing now and that was definitely achieved. 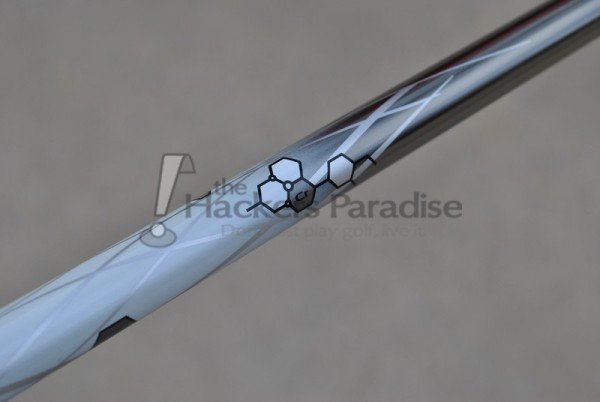 If we were to place a single label on the UST Mamiya Elements 65 F4T then it is at its root a mid-launching shaft with low spin traits. However, something all golfers should remember with all shafts are that different swings necessitate different traits, Proper fitting will always be the key to attaining the best performance. 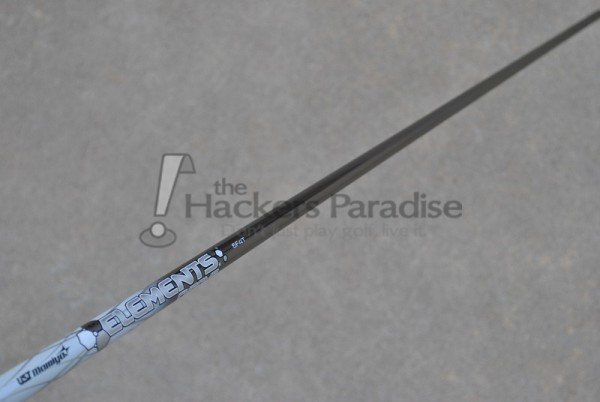 With UST Mamiya touting the massive amounts of technology and R&D that are rolled into the Elements Chrome, there is much buzz surrounding it, as it should be. Time and again through testing the Chrome lived up to the billing that it was given. The shaft provided mid-launch characteristics and managed to do so at a surprisingly lower spin ratio than anticipated. The ball flight followed a nice penetrating path into the apex that was followed by a moderate descent, which seemed to maximize carry while still allowing for roll out. The shaft produced impressive dispersion and stability throughout the time spent with it, which is likely thanks to the utilization of the recoil technology as it pertains to maximizing the transfer of energy.  In fact, the overall feel took some definite similarities to the general flow and kick of the Recoil iron shafts. Most notably though, compared to shafts with similar launch characteristics a ball speed increase was seen with the Chrome even at the same swing speed.

UST Mamiya has long been known for quality both in development and in the construction of their products and the Elements Line is a definite continuation of that. The Elements Chrome certainly lives up to the billing of all of the technology that is rolled into it and will undoubtedly be a tremendous performer for many. It is always worth remembering however that the best way to know how a shaft will work for your game is to get fit and UST offers multiple options for this, both online through their fitting tool and in person at their qualified dealers.

For more information on the UST Elements Chrome and where to find it, check out www.ustmamiya.com.