The C300 release for Wilson-Staff is one which could go a long way to finally breaking them free of the stigma’s that some seem to still establish with the company. The lineup is everything contrary to those preconceptions, they are not only bold and visually intriguing, but also loaded with technology which the company adamantly believes will force golfers to take notice. Though drivers and the fairways tend to garner the majority of attention, the C300 hybrid should turn some heads as well, and THP was able to get the 17° version paired with the Fujikura Speeder Pro 78H shaft in hand for a breakdown of just what it is capable of.

Wilson-Staff on the new C300 Hybrid: 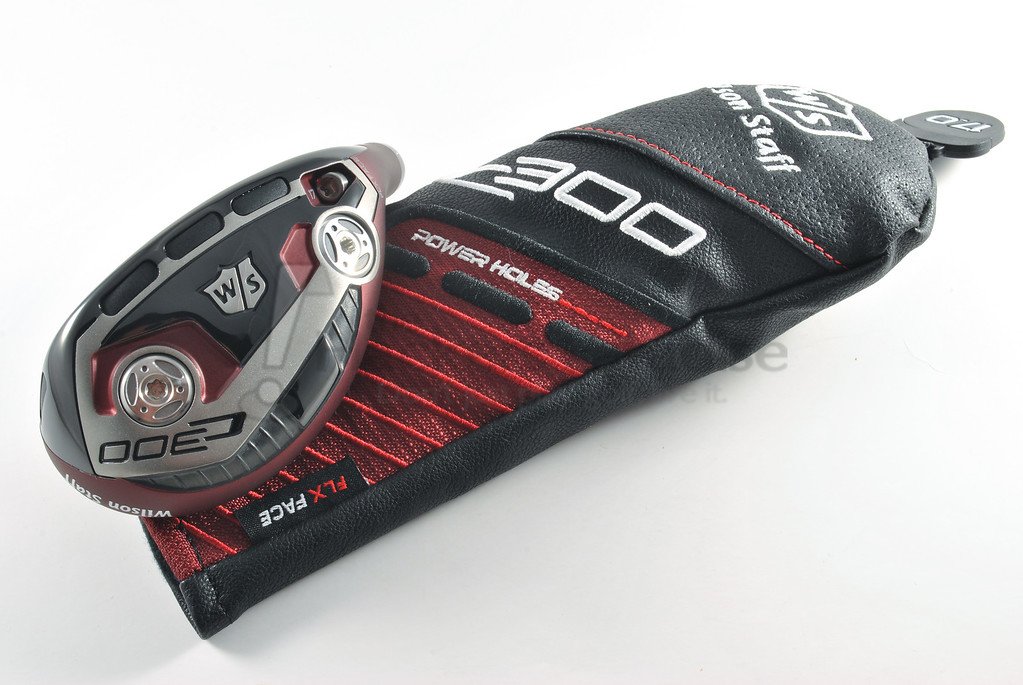 In recent years, the “C” series from Wilson-Staff has seemingly been their proving ground when it comes to innovation and showing the golf industry that they too can push the envelope. The C200 irons introduced “Power Holes” to the world and though the look was different, the performance increase that they provided were definitely tangible. With the performance the company saw in the irons, the next step was not just to refine it for the next release of irons, but also figure out how to apply it to their metalwoods, and the C300 driver, fairways, and hybrids were born. 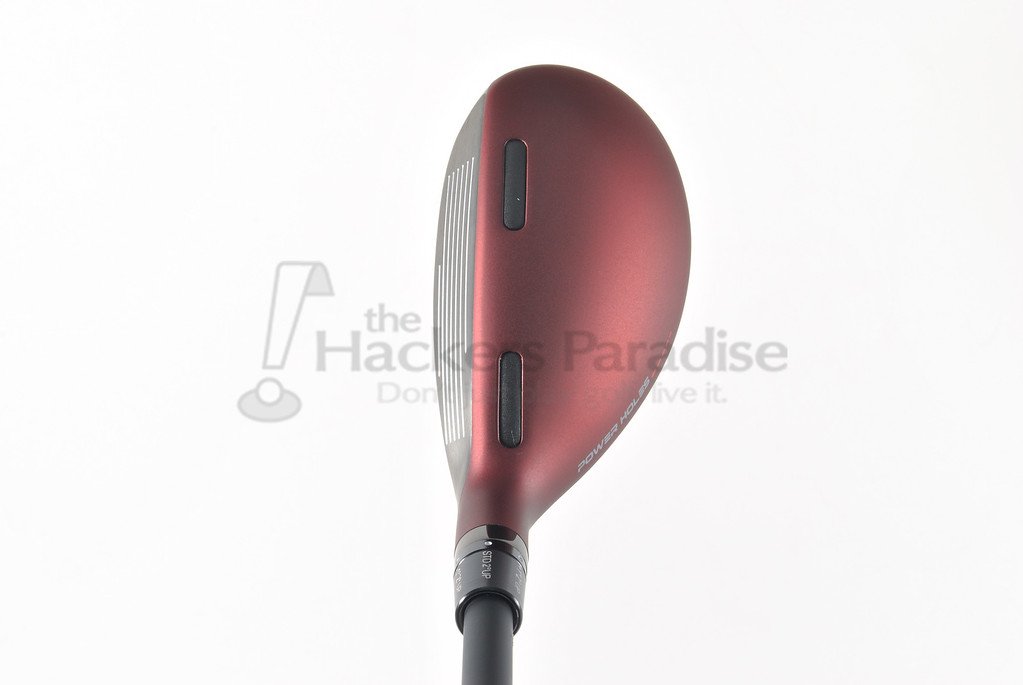 The hybrid features five Power Holes (two on the crown, three on the sole), and the goal is increasing ball speed as well as forgiveness. By specifically positioning the holes around the face and then filling them with urethane they have increased the amount of flex that the face is capable of withstanding at impact. What all of this means is increasing the CT (characteristic time) which also allows for an increase in ball speeds generated, and that means more distance. 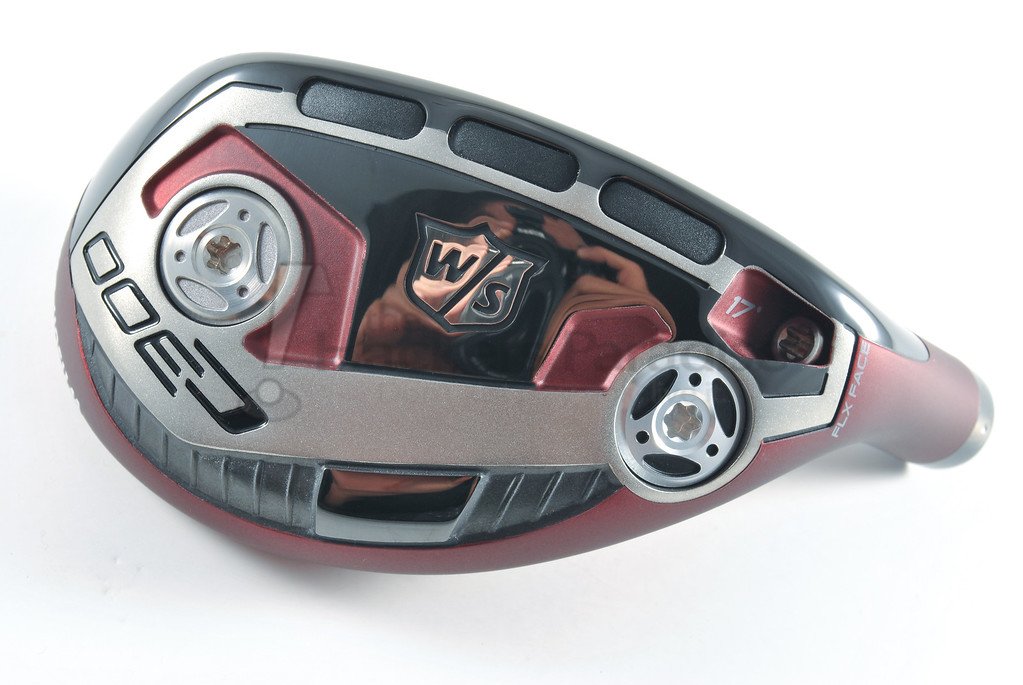 Additionally the hybrid features Multi-Fit Sole Weight Adjustability 3.0, Wilson-Staff’s newest evolution on weight adjustability. The hybrid features two different weights (2g and 12g) that can be placed in the heel or toe of the club. As is the case with other changeable weight clubs, heavier in the heel means more draw biased, and heavier in the toe means more neutral-to-fade biased. It is a nice feature to see in a hybrid, particularly when it’s kept this simple and effective. 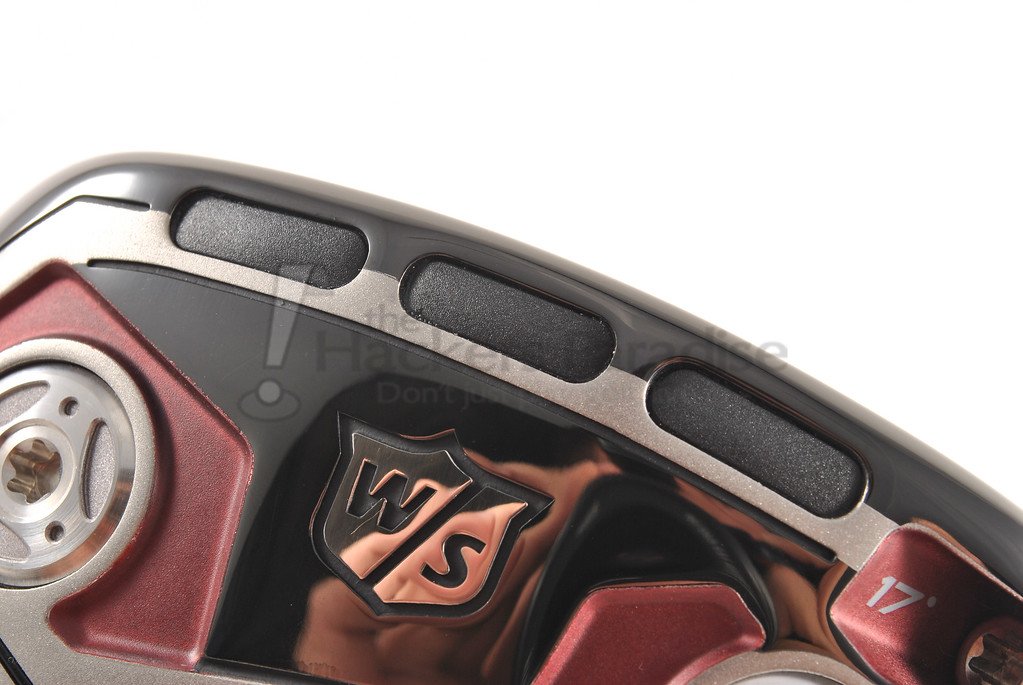 The C300 hybrid is a more compact profile than what one might expect given its placement in the “C” series. From front to back the C300 bucks the trend of what we are seeing on the market right now and it’s the opinion of this reviewer that the smaller look leads to a more visually demanding sensation. Besides the profile, the two things that stand out are obviously the color, and the “Power Holes”. Though one is tech and one is paint, they need to be discussed together because the black urethane of the Power Holes is in stark contrast to the deep matte red finish of the club. Though some might wish the finish had been black to blend rather than contrast, the use of red really showcases the technology which, like it or hate it, is critical in club design and marketing today. The overall design is one of the most modern and complete aesthetic looks from a Wilson-Staff club in a very long time.  There is nothing cheap looking about it, although the “Power Holes” text on the crown might put some off. There is a lot going on here, but they have pulled it all together and wrapped it up with the classic Wilson-Staff shield, there is no doubt the C300 line of metalwoods will have people talking. 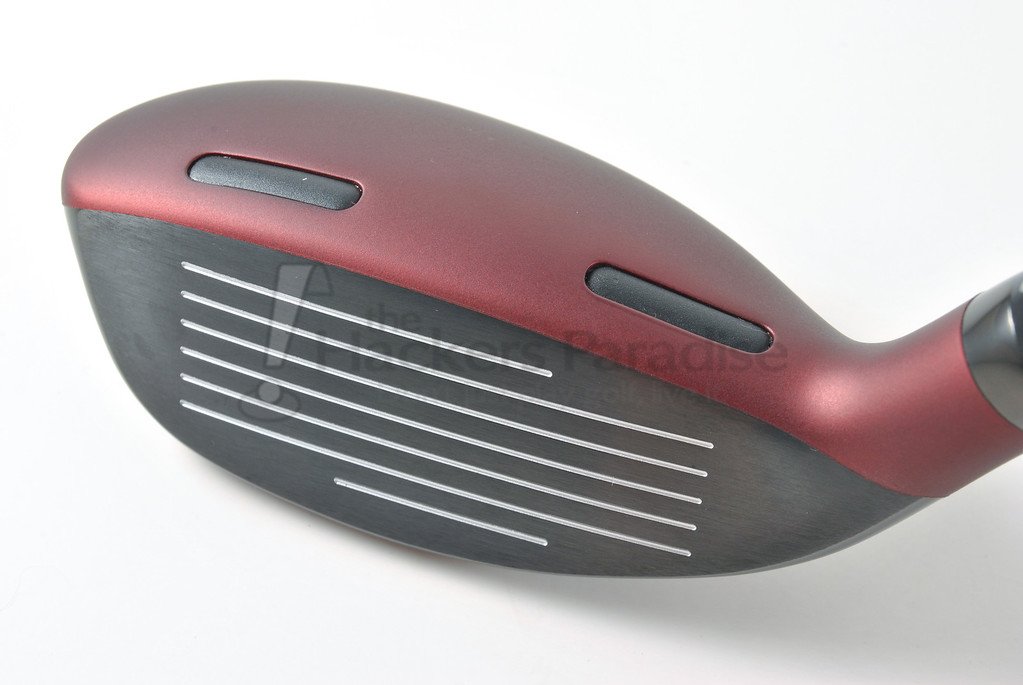 THP received the 17-degree C300 hybrid for review and when combining the 2-iron like loft and smaller profile, it was an intimidating one to take on, but perhaps a perfect one to see how much validity is in the application of “Power Hole” technology beyond irons. As might be expected, launch from a 17-degree club is a bit of a tricky thing, it is a loft that certainly will benefit stronger swingers or higher spin type players the most. Put into a variety of hands, the ball flight was very flat from the deck, with an increased apex angle when hit off the tee. Now, the individual swing matters a lot when hitting a club like this, so to get a more even comparison, a current line 2-hybrid of the same loft from another manufacturer was hit next to the C300 on the Foresight GC2 monitor and on average the launch angle of the C300 was 0.72 degrees higher with an apex a 1.2 yards higher as well. Additionally, the club was hit on the GC2 next to a 5-wood of the same loft and here it was the lower of the two in both launch and apex, not surprising given the differences in weighting and CG placement between the two club types. In all honesty, it would be interesting to also hit the C300 in the 20 or 23-degree option as those are typically much easier to elevate for amateurs. 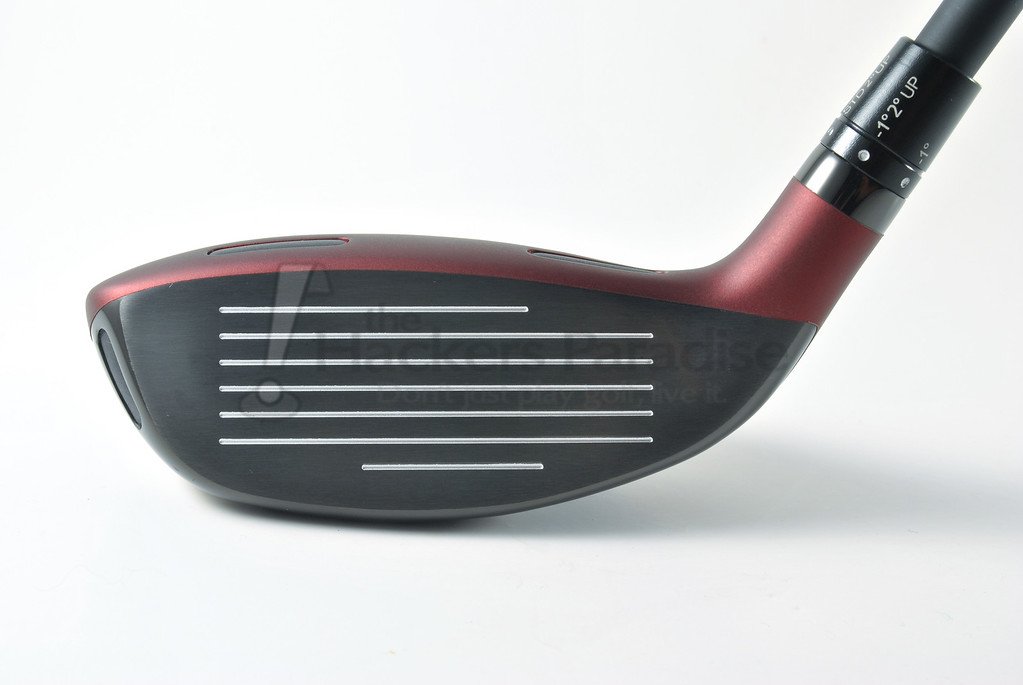 While the loft and launch conversation is important, that should not diminish what the C300 hybrid is capable of when it comes to ball speed and spin, to be blunt, it shocked this reviewer. Compared to similarly lofted hybrids, the ball speed numbers seen were on average 1.1 MPH faster, additionally, the spin was 250+ RPM lower. What does all this mean? Well, it means that the Power Holes are doing their job and this spin/ball-speed combination affords a significant distance potential, and a huge improvement on its predecessors within the company. In the right hands, the 17-degree could become a viable 5-wood alternative, though the low spin might be of some concern for those hitting into greens depending on how well they launch the club, off the tee though the potential is real. 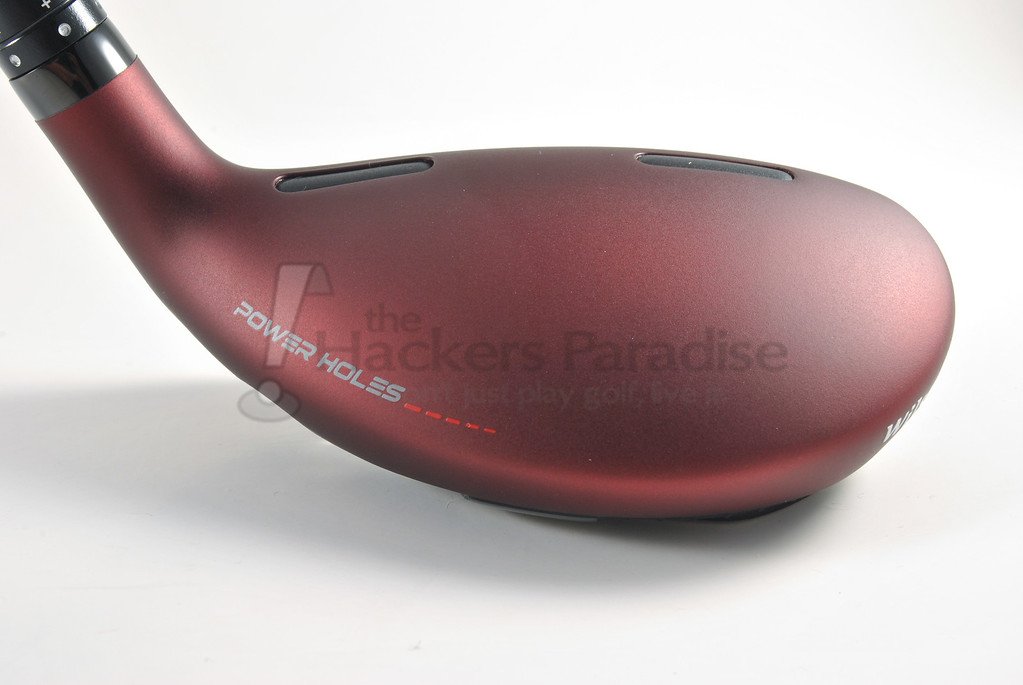 Given the profile/footprint, there is naturally a preconception about just how playable the C300 can be. Based on testing, it plays like a much bigger club. What that means is the reaction to off-center shots (particularly on the toe) saw less twisting at impact and thus less of a tendency to hook/cut based on the strike location, essentially its reaction to those misses were much more in line with a larger footprint hybrid. More interesting is that the ball speeds on misses were closer to that of a center strike than expected, showing that just as we saw with the “Power Holes” in the C200 irons, there is definitely something to them. In fact, one can’t help but wonder if perhaps they are more effective in a smaller club like a hybrid than they might be in fairways or more specifically drivers. 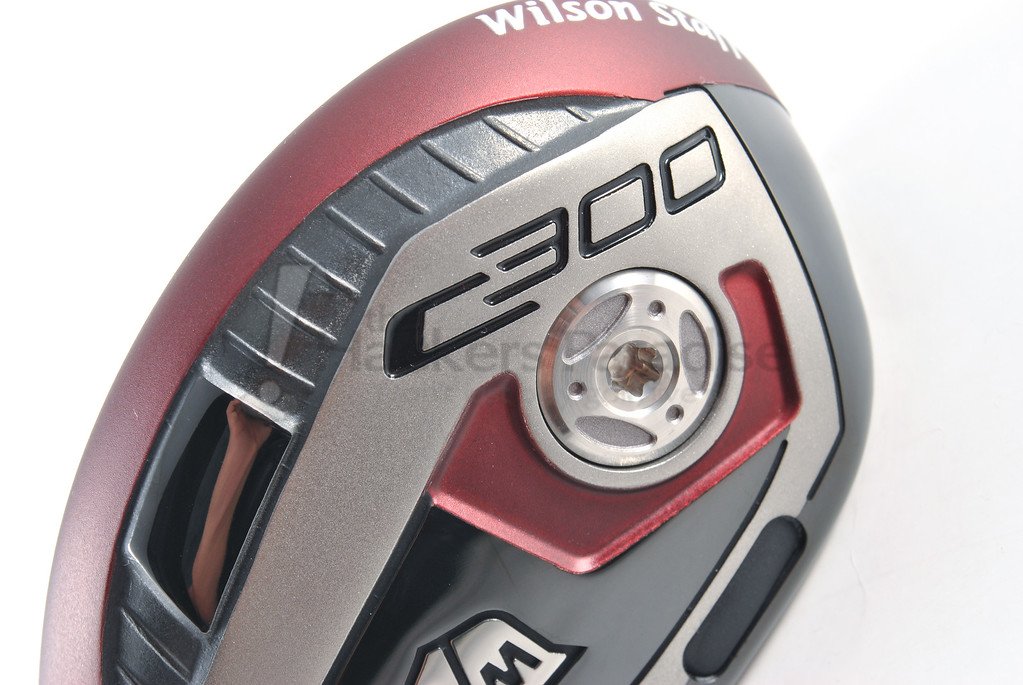 The final performance aspect worth discussing is the adjustability Wilson-Staff has built into the C300 hybrid. As referenced earlier it utilizes a two weight system they call the “Multi-Fit Sole Weight Adjustability 3.0” as well as their hosel adapter which can take the club -1/+1 in loft. The best thing about the weighting is it is simple and effective. Many golfers fear hook biased hybrids, the C300 proved to be very neutral to slightly fade biased when in its standard weight setup (12g toe, 2g heel). That said, flipping the weights did exactly what we have known more weight in the heel of any design to do, it increased the draw bias, but even then provided a surprisingly neutral ball flight. In a world driven by adjustability, there is something to be said by simplicity, you can keep it simple, and effective as Wilson-Staff has done here. 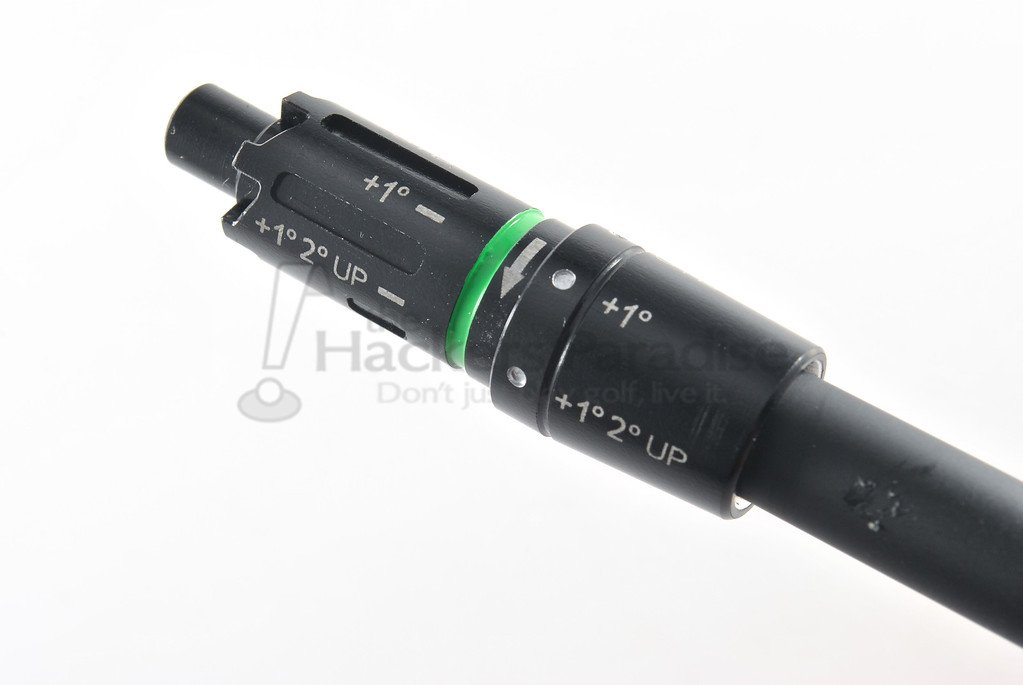 The aesthetics are going to get the majority of discussion when it comes to the C300 line, and rightfully so in terms of finish as it is a step outside the box for the company. That said, it is also extremely identifiable, and the Power Holes only accentuate that. Will that then garner Wilson-Staff more attention of golfers to try the line and see how it stands up? It certainly won’t hurt. When it comes to the hybrid specifically, it will be interesting to see the feedback as time goes on.  There is no doubt the potential is there and they have created a powerful club in a compact package. As always, it will come back to getting the club into people’s hands above all else, and Wilson-Staff certainly appears to be primed to take on that obstacle.

More information on the C300 hybrid which carries a $209.00 price point, as well as the rest of the line, can be found at www.Wilson.com.