Like many golfers, I like to keep my clubs clean and clear of debris so I can get the best possible performance out of them. I typically use a wet towel or a brush for cleaning them and both methods seem to do a fine job. Wunderbrush has created a product, the Scrub Hub, which is supposed to make club-cleaning a little faster and easier for golfers that walk while using a push cart. They sent a sample over for me to review and I’ve spent a number of rounds putting it to the test.

Installation
The Scrub Hub is designed to fit on the wheels of just about any push-cart on the market today. The instructions that came with the brush were easy to follow, as were the diagrams. Basically, you attach the base using a flat-head screwdriver to attach the brackets to the wheel while making sure the device stays centered. After that, the actual brush screws into the base. It’s important to note that the brush is screwed in counter-clockwise, which is supposed to prevent it from coming un-screwed during use. In all, it took me about 5 minutes to install the Scrub Hub, which is definitely reasonable. The brush can be removed from the base at any time, which makes transporting your push cart a little easier.

Performance and Convenience
This can really be broken down into two sections: club cleaning and cleat cleaning. I’ll start with club cleaning.

The basic premise behind the Scrub Hub is that the motion of your push cart’s wheel will turn it into a high-speed, rotating scrub brush. It is designed to allow the user to walk with a club in his or her hand and let the spinning brush remove dirt and grass at the same time, rather than stopping to grab a towel or handheld brush. The premise itself is actually a great idea, though I found it lacked a bit at actually performing this function. While it was easy to hold the club down on to the brush while walking, the only thing that it really did was remove some surface dirt from the club face. It’s not easy to get good leverage on a club just based on length alone. The grooves on my clubs, which are arguably the most important part of the club to keep clean, weren’t really cleaned at all, so I was left reaching for my other handheld brush anyway. I think the problem lies in that the rotating bristles are moving perpendicular to the grooves, rather than with them. The brush basically glides over the grooves instead of penetrating down into them.

I thought the Scrub Hub functioned better as a cleat cleaner than anything. The location was convenient since my feet were fairly close to it as I pushed the cart. I don’t really know that the brush itself is strong enough to stand up to repeated cleat cleaning (as I’ll discuss later), but it seemed to work decently for this purpose. I can see where it would come in handy on a wet or muddy day. 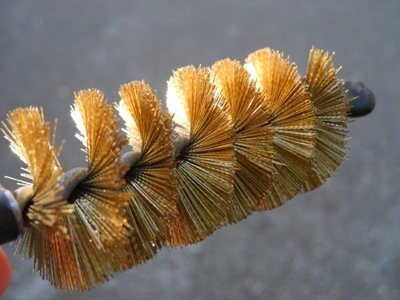 Durability and Other Thoughts
The Scrub Hub’s base and attachment hardware are both made of a hard plastic that seems quite durable. The wire bristles on the brush are similar to any others in that they wore slightly over time, which is to be expected. The actual rod that the bristles are attached to was a little more flexible than expected and I actually bent it before my first nine holes testing the Scrub Hub were complete. I’m not really sure how I bent it, but I suspect it was due to bumping into it with my foot. This did throw the brush at an odd angle, which made attempting to clean a club more difficult. I was able to bend it back, but I did have to take a pretty firm grasp on the prickly bristles to do so. This leads me to believe that repeated cleat cleaning could cause the unit to bend as well, though I personally didn’t experience that issue.

One other observation I had was that I ran into the Scrub Hub a few times with my foot, and actually snagged my shoe laces on it. Obviously, I wasn’t used to having a brush protruding from the wheel of my push cart, and it became a little easier to avoid over time. Still, this is a bit of a safety issue since I could have easily tripped and fallen while getting snagged on it. 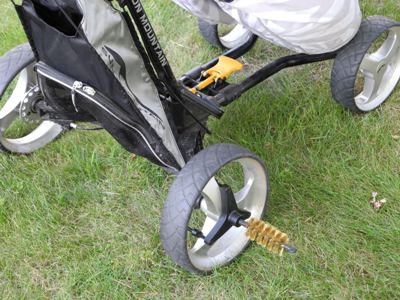 Final Thoughts
I’m constantly amazed at the innovation we see when it comes to golf accessories. The Wunderbrush Scrub Hub really is a neat idea, but I do think it could use some refining. While it cleaned my cleats pretty well, I thought that it could have done a better job on my golf clubs. If you’d like more information, you can head over to www.wunderbrush.com. As always, thanks for reading and best of luck on the golf course.