Yonex is a name that while lesser known among many amateur golfers is well established and known for pushing the design limits of clubs by continually seeking better performance. This year they are continuing the evolution of their EZONE line with the new XP irons, which are based around what they are calling their Dual Tungsten Power system and how the manipulation of weight both in the head and the butt of the clubs can impact playability and performance.

The EZONE XP range features the YONEX Dual Tungsten Power [DTP] System – an innovative engineering breakthrough that produces maximum power and distance. The newly designed DTP System, featuring Tungsten in both the grip and club head, works in conjunction with the Lightweight Shaft.
The result is a swing that delivers an explosive power breakthrough with the same effort, adding more yards to your game. 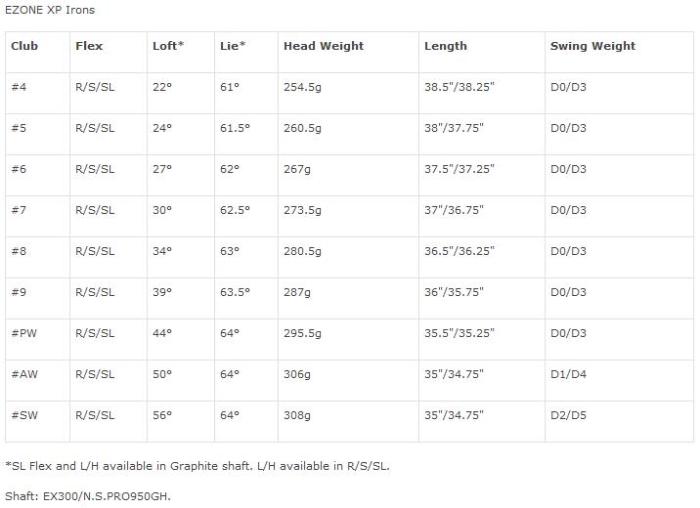 Yonex over the recent years has gone through a variety of different aesthetic looks with their irons, from classic and subtle to much flashier and badging oriented. The new EZONE XP irons fall into the second category, as they possess a much more “modern” look. When held in hand the first thing the eyes go to is the dampening badge in the cavity with its sharp angles and multiple textures. The look here works however thanks to the color and finish being utilized. The badging, though modern looking, sticks to a very classic black and silver color scheme with only a slight splash of red. 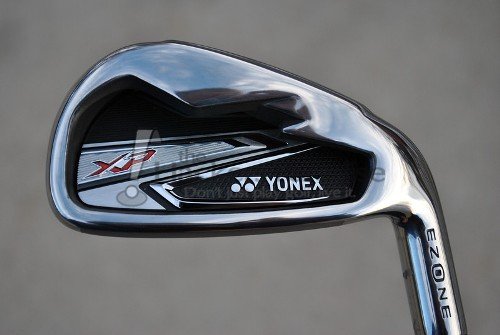 From the perspective of the overall design of the club, the EZONE XP irons are intended to be a game improvement iron and they bring an interesting twist to that category. The irons have an impressively deep cavity that features their dual undercut and provides for a very unique look. The XP’s do have a GI-style wider sole, however the twist comes with the topline being among the thinnest seen on an iron set like this. When combined with a nominal amount of offset in the irons they are simply different in a good way. The package is rounded out by a very nice polished chrome finish everywhere except for the groove area and the brushed toe section (in order to prevent glare at address). 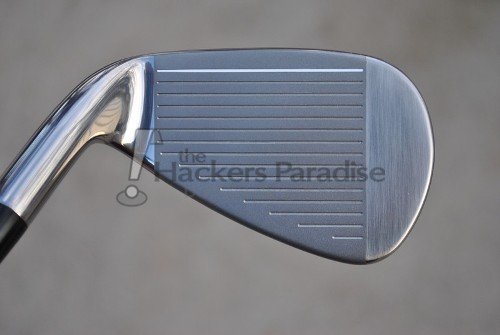 For this review all commentary on the various areas of performance have been broken into two sub-sections with Staff Writer Jason Kunze covering the stock steel setup and James Miles the stock graphite setup so as to provide complete coverage of this new release form Yonex.

The EZONE XP irons are built to launch the golf ball, which is evident from the first swing. The pairing of the heavier heads with the backweighted EX300 graphite shafts and the extreme dual cavity design allow them to get the ball up in a hurry and back down at an angle capable of holding greens. Despite being lightweight, at no time did it feel like the EX300 shafts were being overpowered, which should not be surprising considering Yonex is well known for the quality of their in-house designed graphite shafts. The flow of the shaft and backweighting allowed for the feeling of smooth swings producing a consistent high ball flight throughout the set.

The combination of the XP’s heavier club head and lighter Nippon shaft helps increase distance, but it also increases the launch angle and trajectory of shots.  Long irons were easy to hit high and had a trajectory that made stopping iron shots on the green very easy.  Time and again during testing it became evident that a nice smooth swing would result in a very repeatable high shot that came into the green with a nice steep angle of decent.

The XP irons were some of the longest irons ever put into play by this particular reviewer. With the EX300 graphite setup Yonex has put their belief in what they call the “Dual Tungsten Power” (DTP) system, which added tungsten weight to both the head design and 20g to the butt section of each club under the grip. Essentially they claim that this balance and combination of weights used in the clubs have created the ability for golfers to generate more power out of the same swing, not all that unlike a hammer. Throughout review the evidence was clear that Yonex did their homework and there is a lot to their DTP system paired with the EX300’s, as from all lies the EZONE XP’s were almost a full club longer than comparable clubs in their class for this particular user. While there were initially a few moments of uncertainty as to just what distance would be seen out of each club, as time went on the consistency was much more there both in distance as well as gapping throughout the set. 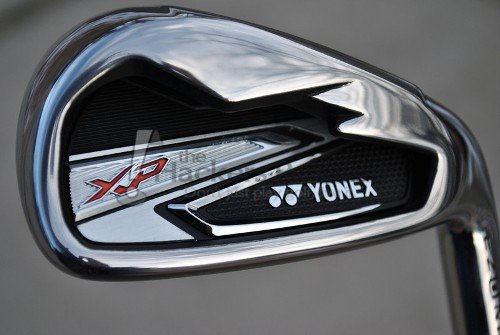 The EZONE XP irons paired with the lightweight Nippon steel shafts are quite long without a doubt.  When the user catches the sweet spot immediate feedback is given. As the ball seemingly explodes off the face the reward is some of the best distance this reviewer has seen out of an iron.  During testing the distance gaps were very minimal throughout the set and there was rarely a distance that this user didn’t feel like the correct club for that distance was in the bag.  One other thing concerning the distance is that at times it seemed to be a little unpredictable.  Part of that is certainly on the swing, but it wasn’t always easy to tell just how far the shots would fly, all depending on where within that Repulsion Area contact was made.  However, one could certainly expect that with more time with the XP irons that will become less and less of an issue.

With an iron in this category typically some “workability” is surrendered in exchange for distance and the XP’s seem to fall within that particular nomenclature as well. This particular setup of the irons simply wants to go high and long no matter the lie. While they can work the ball left, right, or flighted down, the amount at which they do so will not be that of a player’s iron profile. However, that should not be a surprise to anyone and became a non-issue immediately for this reviewer.

One area where the EZONE XP’s proved to show a large amount of versatility however was in turf interaction from a variety of lies. Much of this credit can go to the leading edge as well as the overall size and bevel on the soles, but there is also another more subtle feature that plays a role here. There is actually a small level change both heel and toe side on the club that offers some relief in both of those sections and also seems to let the club work more freely through the rough without much twisting. 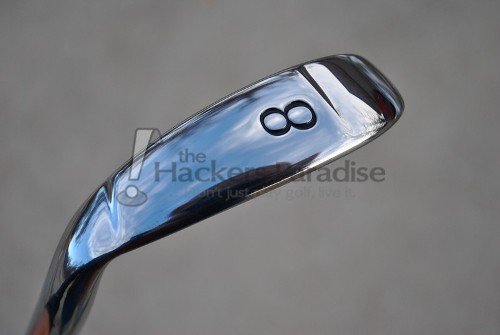 One constant complaint many, including this reviewer, have always had with game improvement and/or distance irons is the lack of versatility.  Typically working the ball a lot during normal play is not of major concern for my style of play, but controlling the trajectory of my shots is. While these irons definitely want to hit the ball high and far, in testing there was some pretty solid success in manipulating the height of the shots as needed.  Another area where the versatility of the XP irons did shine through was in several occasions where taking a little off of a club for a certain distance was necessary and each time the right club for the distance needed was there. 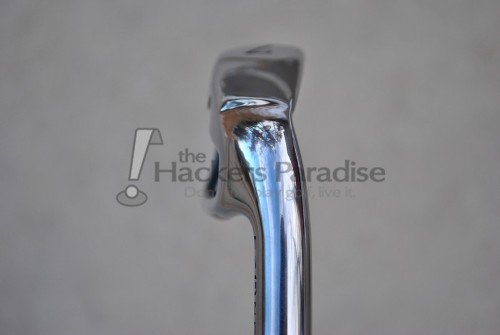 This is an area where the XP’s paired with the EX300 shafts really shined during review. While it has already been touched on that the extreme dual cavity design and tungsten counterbalancing allows for a high penetrating launch and ample distance, that same setup also provided the same forgiveness we have come to expect from irons in this class. In particular, toe side misses were among the top in overall forgiveness, with less distance loss than expected and a tendency to maintain a good line. This is surely an attribute of the dual cavity. Overall, cross face forgiveness is there in the set. The feedback given audibly or through the hands on the misses was not as noticeable as other sets, but that isn’t necessarily a bad thing. 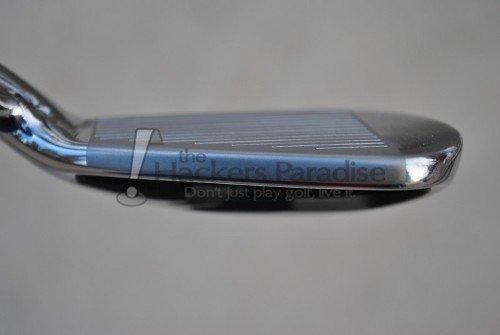 The EZONE XP Repulsion Area is undoubtedly where you want the contact to be made, as you can feel the ball exploding off the face.  It is nice to know that these irons pack in some solid forgiveness that helps you out when you don’t hit that spot every time.  While the feedback was not something that would necessarily be considered a strength, that is not to say there is no feedback at all.  Personally, this reviewer just could not always tell the degree of a miss when one did occur.  The overall results, especially on shots I missed slightly toward the toe, were very nice to see, but there simply was not a lot of feedback that came with those misses. 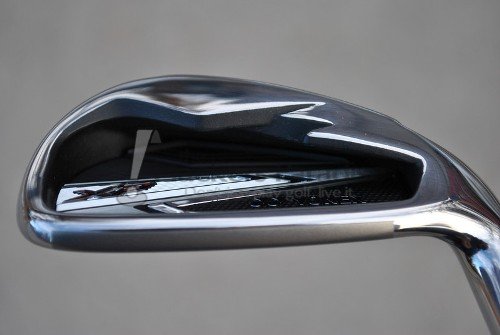 When pairing a club like the XP with its deep cavity design and perimeter weighting the user often knows what type of feedback is going to be given on well struck shots and misses. Overall the sound off of the face is very consistent all the way across, with only minor pitch changes to a slightly higher tone when caught heel/toe/low. This is likely a product of the design itself and the pairing with graphite which naturally dampens vibrations anyways. This is not at all to say that the clubs lack in this department, but rather the dampening effects simply limit the feel that most golfers will sense off of the face. Still, the irons offer a solid feel/sound that is not at all awkward and fits an iron of this particular design. 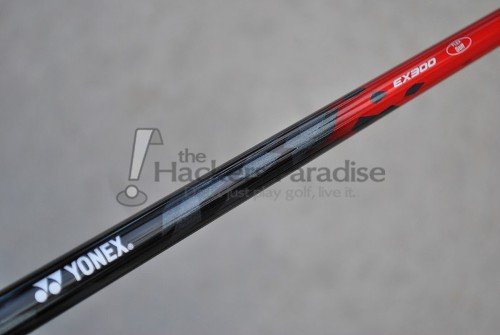 The feel of the EZONE XP irons is apparent before you even make contact with a golf ball.  Just holding them in your hand you get a sense that you are holding a solid iron.  The light-weight Nippon shaft paired with the slightly heavier head provided a unique combination that really resulted in some additional power and an overall solid feeling and performing iron. Sound and feel at impact are both very difficult to quantify because of how subjective both qualities can be.  Solid shots were rewarded with a surprisingly great feel; however the overall feedback isn’t what I would consider to be a main strength of the XP irons. That is not completely surprising given their focus on distance and forgiveness. 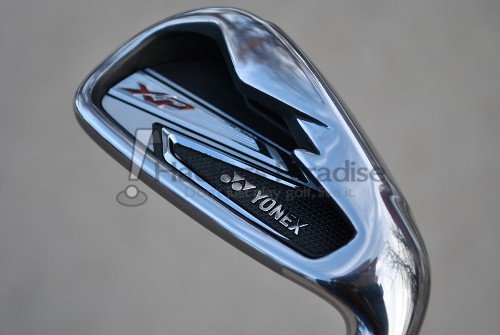 While not a household name here in the states, Yonex is a name known for quality and effective R&D put forth into their designs. Their new EZONE XP irons definitely illustrate those very qualities, as they are a well rounded set of irons and offer some of the best distance out there. Naturally the issue here for many will be simply finding some place that carries the line, which may hinder just how much play they get. However, if you can find them to try, they are well worth taking the time to do so and would undoubtedly open some eyes with their performance.