I just heard on the radio that Alaska Air and some other airline are beginning regular service out of Seattle again. Hope you make it out OK (and back!) Harry.

Here in Sea-Town. I'm sad to report that it's starting to snow again. No Christmas morning 9 with Dad this year.

TheHammer said:
Here in Sea-Town. I'm sad to report that it's starting to snow again. No Christmas morning 9 with Dad this year.
Click to expand...

Harry Longshanks said:
It didn't snow yesterday where I was, but it's coming down again now.
Click to expand...

Shouldn't you be on a plane about now?
Techno-Klutz
WITB
Driver--

ClairefromClare said:
Shouldn't you be on a plane about now?
Click to expand...

Harry Longshanks said:
Not until tomorrow morning.
Click to expand...

I'm beginning to wonder if this whole trip isn't doomed: 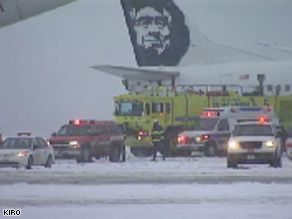 
The seven, who were crew members, were transported to Highline Medical Center for minor issues, such as eye irritation, dizziness and nausea, said Sea-Tac Airport spokesman Perry Cooper. Eighteen passengers were treated at the scene.

There had been an initial report that two people were badly hurt, but Cooper said all of the injuries were minor. He said six of the crew members transported to the hospital were working and one was off duty.

Caroline Boren, Alaska Airlines spokeswoman, confirmed the injury numbers and said the most extensive treatment given to the passengers was an eye wash. None of them requested further treatment or were transported to the hospital.

Matt Crockett, assistant administrator at Highline Medical Center, confirmed the hospital was assessing seven people in its emergency room. He said six of them were in satisfactory condition and another was still being evaluated.

The incident began when fumes from the de-icing application got into the cabin of Alaska Airlines Flight 528. Video Watch an ex-transportation official explain how the fumes seeped into the plane Â»

Alaska Airlines said the flight was getting ready for takeoff to Burbank, California, when passengers began to complain of eye irritation and strong fumes from the chemicals. Video footage showed several emergency vehicles around the plane on the snow-covered tarmac.

The airline said the plane, a Boeing 737-800, was carrying 143 passengers and several crew members. Boren called the situation "very unusual" and said maintenance crew had been working on the plane.

Cooper said the airline was bringing in another aircraft to transport the passengers to their destination.

Seattle has been blanketed with nearly 9 inches of snow this week, and forecasters predicted snow mixed with rain Wednesday, with an accumulation of about a half inch of new snow through Thursday.

One passenger, Joe Dial of Seattle, told CNN affiliate KIRO-TV that passengers were exposed to the de-icer fumes for 45 minutes before they were able to leave the plane.

The jetliner had pulled away from the gate Wednesday morning, but then had to return for the de-icing process, Dial told KIRO.

Witnesses said passengers were being evacuated to buses, and there appeared to be no injuries, according to WQAD. The airport was closed to all traffic after the accident, the station said.

At airports elsewhere across the U.S., weather was forcing significant delays as travelers tried to reach their destinations by Christmas.

Travelers at O'Hare were hoping Wednesday went better than the day before as thousands were stranded in the nation's second-busiest airport overnight when hundreds of flights were canceled.

"I am not going to have a holiday mood till I get home," stranded passenger Ken Estes told WLS.

O'Hare's trouble extended to South Florida, where Laura Weichhand and Rachel Lewis got stuck at Fort Lauderdale-Hollywood International Airport when their flight to Chicago was canceled.

The Chicago area was expected to get 1 inch to 3 inches of new snow Wednesday.

Deanna Nokes, who was stranded in Denver on her way to Portland, Oregon, told KGMH her bags were nowhere in sight.

"They don't even know where my bag is," she told the station. "It still could be in Vegas, or Phoenix, or Portland."

Airports in Portland, Oregon, and Seattle, Washington, were hit hardest by weather delays earlier in the week, with hundreds of flight cancellations Sunday through Tuesday.

The two Northwest airports were reporting just a few delays Wednesday, but a new storm was rolling in from the Pacific Ocean, bringing snow and rain, the National Weather Service said.

"It will not be as strong as this past weekend's storm," said weather service meteorologist Kirby Cook in Seattle.

But that may be of little consolation to thousands of travelers stranded at Northwest airports because of cancellations earlier in the week.

Some in Spokane turned to Craigslist.com to try to get home for Christmas. The Web site had more than 30 posts from people looking to get to or out of Spokane, CNN affiliate KXLY-TV reported.

"I know Craigslist has a rideshare community so I thought I'd try, and so far not so good," Priscilla Davis of Federal Way, Washington, told KXLY.
Click to expand...