After years of waiting for a golf sim, the journey is complete. I was waiting until we built a new house however the market for lake view lots here in Kelowna BC is ridiculous so we decided to stay in our current place (which I love). After agreeing to getting new counter tops and hardwood for the wife, I decided to put a sim on the garage. That’s the only place where I can swing a club freely.

After months of research and dealing with Cory at Par2Pro, I ended up going with a used GC2 for my launch monitor. The Skytrak just had too many disadvantages and the extra $3500 for the GC2 is well worth it.

My biggest struggle was the software. Foresight FSX2018 is incredibly expensive. TGC has nice graphics but lacks in the true golf sim experience. E6 is outdated. The boys at OnlineGolfTour got in touch with me and got me looking into Jack Nicklaus Perfect Golf using the OGT interface. Wow, these guys are awesome. Support has been amazing and their tour is top notch. Glad I went OGT.

The first step was rearranging a few things in the garage. Shelving above my garage door was moved. The major part of this was the garage door opener. I ended up having to remove the current one and go with a wall mount opener to have the space for the roll up screen and to swing. 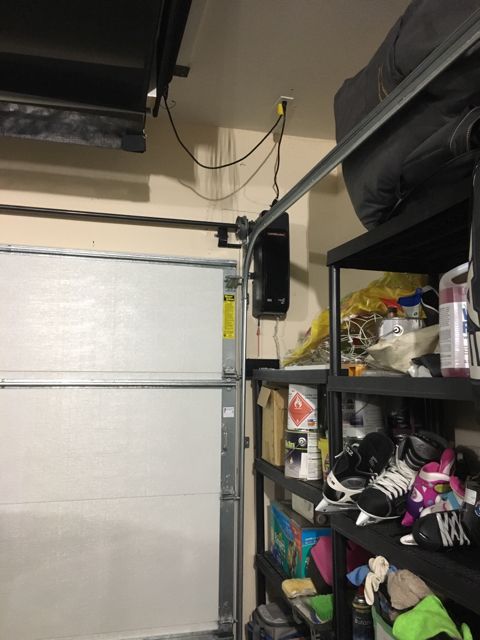 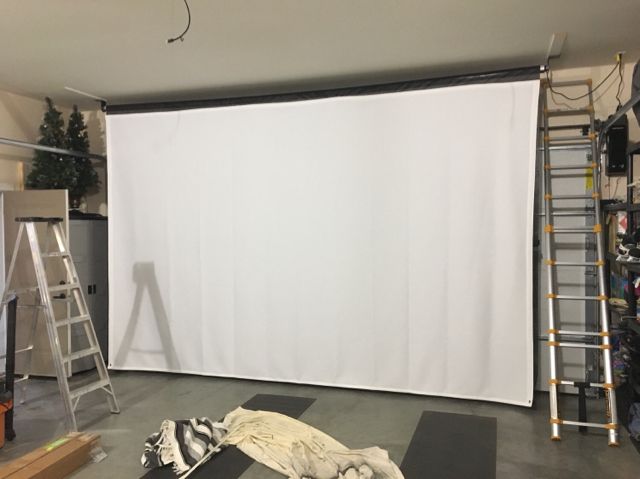 Next were the side impact screens. Par2Pro made them from black out curtains and after a little grinding the brackets to add room for the thick fabric, they were installed using a blind roller system. I clip and velcro them to close any gaps during game play.

The biggest part of the build was the impact netting. I made a frame of 1x4 mdf and attached 6’ of impact netting on it. Hanging it was tough but it’s a great ceiling protector. It also protects the sportscreen roll up bar from direct impact. 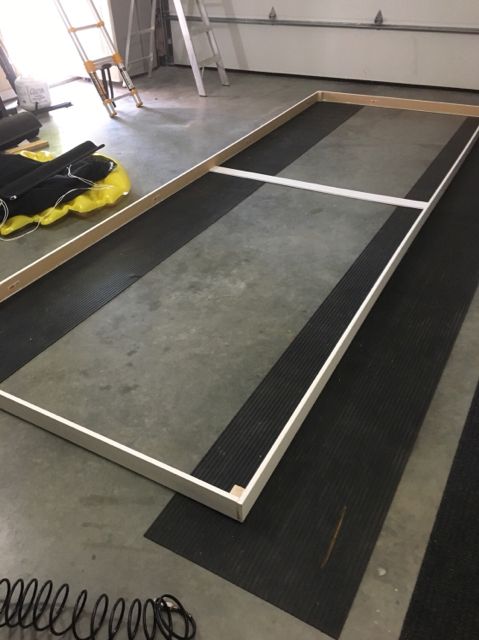 I bought some 12x8 thick turf from Home Depot and place that in front of the screen. I’m using my CCE mat but honestly it’s just to penalizing on less than perfect shots so I ordered a TrueStrike mat that will be here tomorrow. I’ll build a platform that has the CCE as my stance mat and the TrueStrike as my hitting mat. I’ve drilled some anchor holes into the concrete to keep it from moving around.

The projector is a BenQ gaming HD unit. The picture is crazy sharp and I run it with a new gaming laptop. 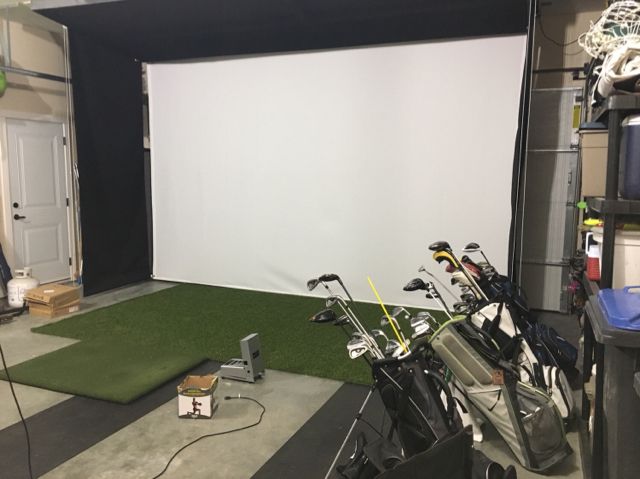 The whole setup takes me 8 minutes to hit the first shot. It’s the same to get my wife’s car back in the garage. 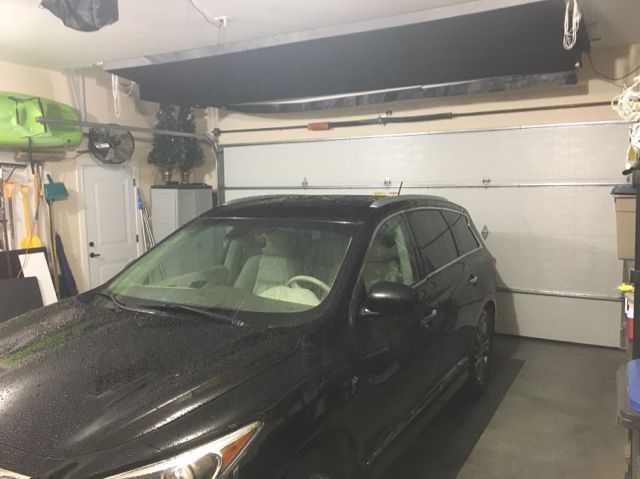 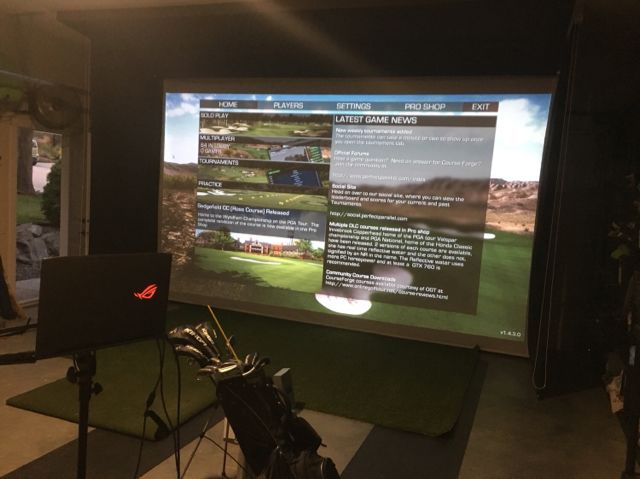 It’s taken a few months and was WAY more expensive than planned but it’s pretty amazing. There’s no hiding swing flaws on the GC2.

A couple of video shots from YouTube because Tapatalk won’t let me add videos.

On The Eh Team

This is so sweet - thanks for all the info and pics. Need to do this in the basement.


Sent from my iPhone using Tapatalk
The Freaking #grandaddy2019 !!!

Huge thanks to THP and

for the incredible irons and shafts from #shaftup 3 - fitting and build by the amazing Danny Le. Game and life changing experience.

Definitely a killer setup! I hope to add on to the back side of my garage in a few years and add a swing bay. I plan to leave it expandable in case the kid likes baseball and golf(I really hope he gets that from me!) Maybe have enough room to take BP with the garage door up and close the door, drop the screen and hit golf balls on a sim. We'll see how that shakes out, but yours is definitely the end goal.
2018 Cleveland Game Changer w/Jamie Sadlowski
2019 Ben Hogan Experience

That is an awesome setup! Enjoy it!

Outstanding! Thanks for sharing that
Driver-

Proud to be a member of the 2019 Odyssey Experience

That's an awesome setup. Is the software fairly intuitive to use?

My mates and I would never leave, haha.
WITB:

That is so awesome! I've talked about doing something like that in the future and this is a great model to follow. Thanks for the write up.
Proud Team THP alum in #TheGrandaddy 2018

This is amazing. I have a third car garage and wonder if this setup would work in a smaller single car garage bay.
Driver -

This is great! Lucky man


Alumnus - Team Hackers @ the 2019 Morgan Cup
Special thanks to

What do you suck in? I can’t read your shirt.

Club down. Your airmailing greens !!

What a great setup! Thanks for sharing!

I went pretty high end on everything. The cost depends on who’s asking. If it’s my wife, around 11k CAD. For my buddies, it’s more around 14k.

DufferToo said:
That's an awesome setup. Is the software fairly intuitive to use?
Click to expand...

The guys on OGT help you get through the initial stages of connecting. Once that’s all good, it’s super easy. I just aim and then go shoot. You don’t have to select your club on the software (like some others). The GC2 just picks up the ball data. It’s super accurate. Plus the OGT site has a bunch of stuff where you can save shot data while practicing to dial in your distances. Plus they have a bunch of challenges. It’s bloody cool.

I'm bookmarking this thread in case we do wind up moving back East next year.
Click to expand...

Please PM me if you do. I researched the crap out of this for months. I wouldn’t change a thing.


tucsoncacti said:
This is amazing. I have a third car garage and wonder if this setup would work in a smaller single car garage bay.
Click to expand...

There are smaller screens that would work. I know there is a portable roll up screen on the market although it’s nowhere near as good as the HQ one from Par2Pro. I’d park one car in the single bay and do what I did with my wife’s car. The 16x9 screen is wild. I’ve had the kids do a movie night in there.


JohnSinVA said:
What do you suck in? I can’t read your shirt.
Click to expand...

Fantasy football. I came in last place last year (But I won the year before). It was draft day on that video and I was forced to wear it.