Jesse Ortiz has made a name for himself by focusing his design efforts on making the game easier for normal golfers. His new line of woods, simply named “Black”, illustrates this point perfectly. By not acceding to the ever-present approach of distance at all costs, he aims to provide ease-of-use and consistency, both of which are often afterthoughts in modern fairway woods. 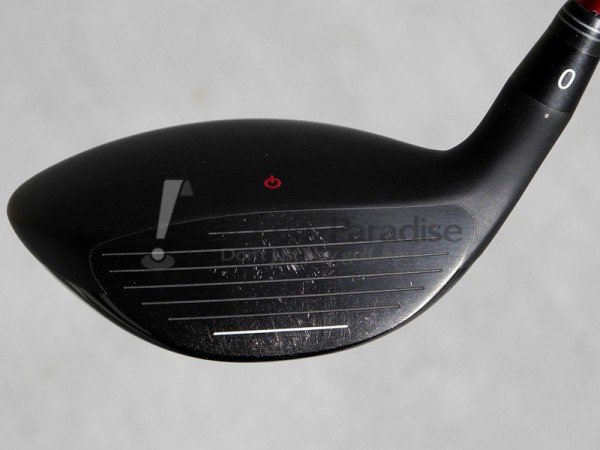 “Depending on whether it’s a driver, fairway wood or hybrid, a sheet of material is formed to the shape of a shallow cup. The edges are joined to the clubhead’s body using a patented brazing process necessary to fuse dissimilar metals. The joint line is recessed away from the face or hitting area so as not to interfere with the natural flexing of the face area. This produces a hotter face and more consistent ball flight on off-center hits.”

Like the Black hybrid, the fairway wood features the same cup-face technology that is quite popular in Japan, but due to cost remains somewhat elusive in the North American market. The benefits of the cup-face are clearly there in forgiveness, which makes the Black an attractive option for the many players that struggle with consistency using fairway woods.

“I also incorporate a shallow face design which instills confidence at the address position…making it look like the ball is on a tee.” 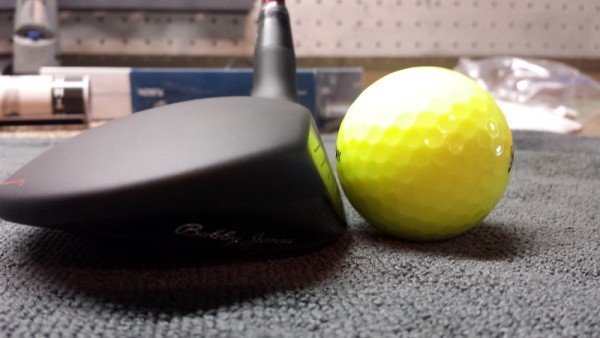 The picture above illustrates nicely just how low profile the Black fairway wood is, which makes it a throwback of sorts in this age of oversized fairway woods. In essence, this is a club designed to work optimally off the turf and the image it presents at address will be encouraging for those that tend to fear that shot. 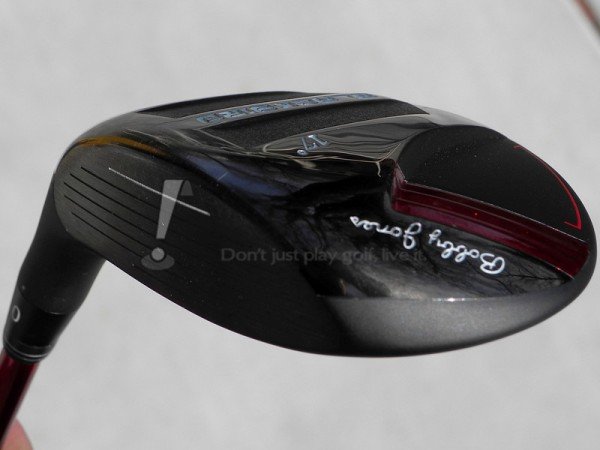 “The sole features my trademark drag reducing inverted runners for greater playability from tight fairway lies. They are very functional. They create much less drag when in contact with the turf. Many competitors have grooves or slots on their soles that run perpendicular to the clubhead’s path through the swing. These slots grab the turf creating twist and preventing solid contact with the ball…and besides, you’re always cleaning out the dirt and grass from the groove. That should tell you how much resistance that design is creating.”

The inverted runners (or what some call rails) on the bottom of the Black fairway wood combine with both the low-profile face and cambered leading edge to further simplify the club’s use off grass surfaces. Jesse Ortiz has been quite vocal in his belief that modern fairway woods are designed more for Tour players and amateurs that use them as a driver alternative, which has left the average player looking for multi-dimensional performance in the dark. 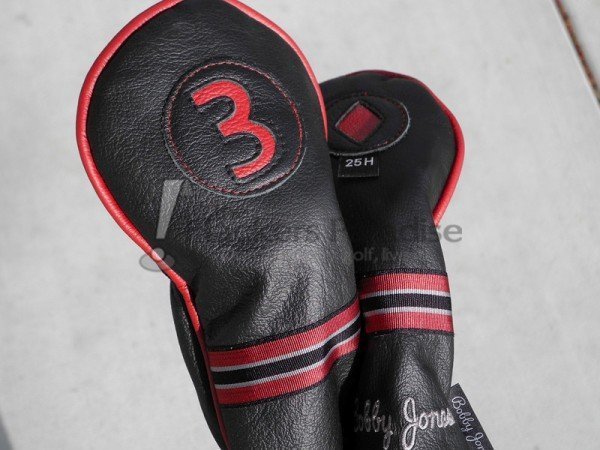 Similar to how the rest of the line is described, the Black fairway wood brings to mind the word ‘stealthy’ with its matte black finish and red accents. The look is a bit of a departure for Jesse Ortiz in that the club lacks some of the pure classic looks that some previous Bobby Jones lines have exhibited. This departure is certainly welcome and tends to complement the technology that has been built into the club though.

With the aforementioned low profile, the Black sits close to the ground, and though the toe is slightly elongated, the club is relatively compact in appearance. The custom leather Stitch Headcover is a nice addition to the club, giving back a bit of the classic feeling lost in the somewhat futuristic design. The red Graphite Design shaft is a perfect match for the color scheme, and its easy-to-launch profile lends itself nicely to the club’s intended purpose.

Like the hybrid, the Black fairway wood imparts a crisp metallic sound at impact that was pleasing to the ears and left testers wanting to hear it again and again. 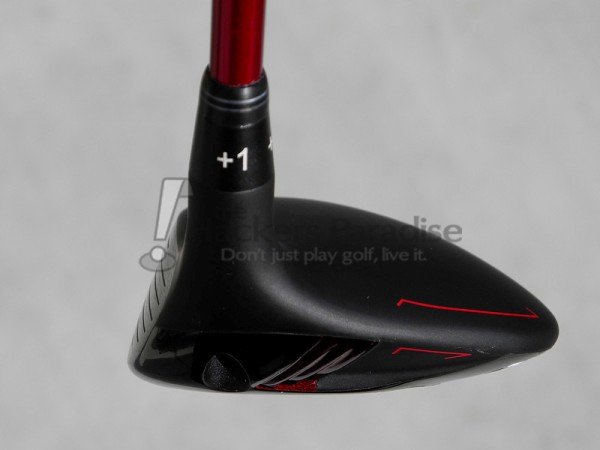 The Black fairway wood was tested both on the course in numerous locales and while using a Vector X launch monitor. The club tested was the 17° version, with the stock stiff Graphite Design shaft.

Testing on both the course and launch monitor showed that while not the longest fairway wood tested in recent times, the Black provided the especially satisfying ability to elevate the ball from the turf. Though some have no issues with this, many players do in fact struggle with this shot while using modern designs, including the reviewer. By moving away from the ultra-low spinning and launching designs that we see so frequently now, the Black will brings a valuable shot back into the bag.

Distance numbers were similar in many ways to some other 18° 5 woods tested recently, which makes sense based on the similar loft and club length. Trajectory from the turf was the key difference seen, with higher-than-anticipated shots easy to come by. On course testing showed the Black was even a relevant option for par 3’s in the 215+ range for a notoriously low ball hitter due to the trajectory it produced.

With the low profile, a lower tee height produced the best results from the tee box, but there were no issues with the shot itself after the adjustment. 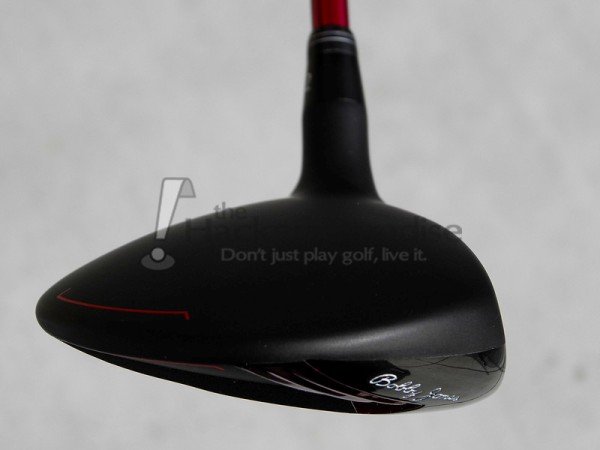 As observed during testing of the hybrid, the Black’s cup-face does appear to offer exceptional forgiveness on off-center impacts. Though trajectory was lowered with low-face misses, the retention of ball speeds meant that shots that hit short grass still chased quite nicely down the fairway, reducing potential losses in total distance.

As noted above, the Black was extremely playable by a mid-handicapper that would characterize himself as weak with fairway woods. Those players not seeking additional height or forgiveness (or who use a fairway wood primarily as a driver alternative) may not find the same benefits, but those similar to the reviewer could see some measurable performance gains.

Though in a perfect world one would not have to attempt such shots, the Black was used successfully in a variety of trouble lies during testing. Even with the cambered leading edge, it still probably isn’t the smartest option for thick spring rough (a wedge might be the best option), but it still allowed enough trajectory to escape these situations (with an expected loss of distance). The most impressive use seen during testing was side-hill lie from pine straw, which is a shot the reviewer wouldn’t have even considered with a different fairway wood.

The Black is probably not the club for the player looking to get maximum workability with a fairway wood, though trajectory changes were accomplishable via punch shots. Still though, this is a club designed for ease-of-use and will likely appeal most to players looking for height and playability from a variety of lies.

If you’ve given up on fairway woods, are considering giving up, or just have one sitting unused in the bag, the Bobby Jones presents a truly viable option to consider. The seemingly effortless trajectory from fairway lies and forgiving nature of the club contrast with what we normally see in today’s 100% distance fueled offerings. Instead, the Black comes with slightly more loft, slightly less length, and significantly more ease-of-use for the average player. For more information, including ordering options, check out the Bobby Jones website, www.bobbyjones.com.