Continuing their year of bending boundaries, stretching the capacity of various club head metrics, and redefining what the industry is capable of producing, Cobra Golf unveiled the King Utility, packed with smartly weighted hollow body technology, and the ever popular MyFly8 adapter.  Yes, a utility iron that can start at 18 degrees of loft and go all the way to 21 degrees depending on shot shape expectations and proper gapping with other clubs in the bag. 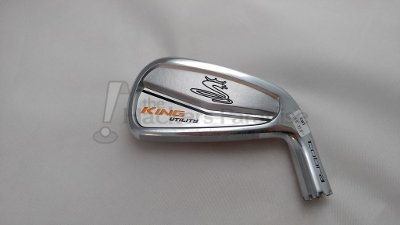 Cobra Golf, a leader in golf club innovation and technology, introduced the KING Utility Iron, the brand’s first adjustable hollow body utility iron that offers multiple loft settings in a single club. The KING Utility is available in a 3-iron, featuring a large sole with a hollow head, and is packed with COBRA Golf’s game-changing metalwood technologies including MyFly8 that allows golfers to seamlessly adjust the loft to best fit their games.

Like many of the hollow body utility irons available to the market today, the profile of the Cobra King Utility Iron is that of a wider, more forgiving soled long iron, but a concentrated effort has clearly been made to keep appearances on the top line reasonable.  Players who prefer to use irons that are limited in bulk will really appreciate the simple transition from a players iron to the Utility, and then onto the hybrids and woods. 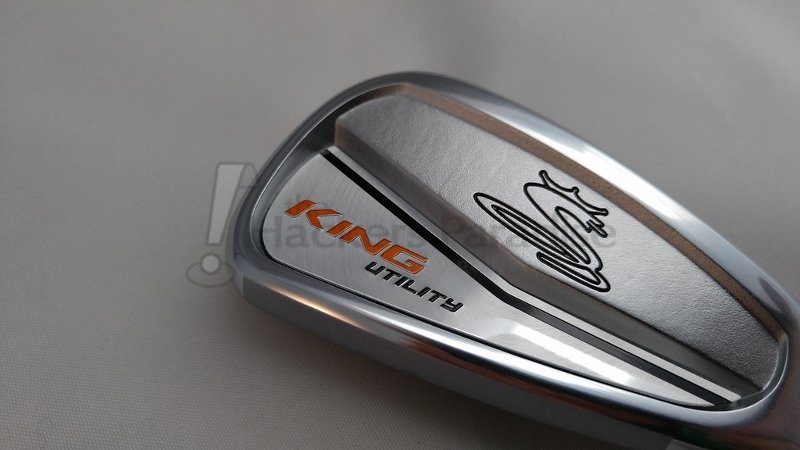 Naturally, eyes quickly turn their attention to the MyFly adapter and ability to not only remove the shaft from the head, but change the loft between 18 degrees and 21 degrees with various draw settings throughout.  Not unlike others from the King lineup, Cobra has selected the Rogue 95 shaft at 85 grams as their graphite option which blends well with the idea of gaming the Utility in place of an iron or a hybrid.

Tungsten Weighted– Cobra placed 67 grams of tungsten weight low and back in the head to create an extremely low center of gravity. From Tom Olsavsky (VP Cobra R&D): Tungsten is a very dense element, more than twice the density of steel, which gives us the ability to lower the CG vs an all steel construction. The lower CG makes it easy to launch for better performance. Additionally, a very low CG will also feel better on most shots from the ground.

For lack of a better term, some pretty heavy technology conversation that encompasses the weight placement of the tungsten low in the head to support an improved launch, and something experienced repeatedly through the testing period with the Cobra King Utility iron.  Whether off a tee or off the fairway, the combination of the head and shaft work to promote an ideal mid launch with ease, but also opening the opportunity to work the ball higher and lower depending on shot needs.  This aligns very well with Cobra’s goal of launching in between an iron and a hybrid. 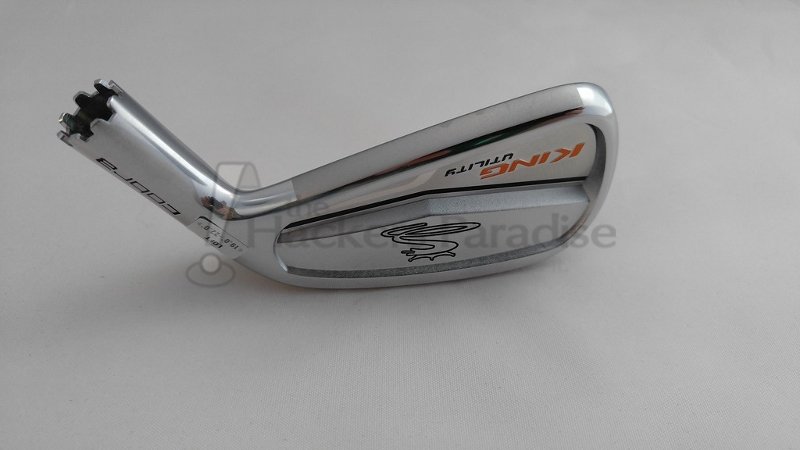 Hollow Body Construction – Cobras’ new Hollow Body design has been engineered to save weight internally & reposition it low and deep in the head for improved forgiveness. From Tom Olsavsky: We encase the tungsten by welding the 2 parts of the hollow body together for an extremely secure joint and construction method.

One thing that seemed overly consistent throughout the testing of the King Utility Iron was the forgiveness across the face, especially on strikes that were hit on the lower grooves.  The ball did not retain much of the ideal launch conditions, but distance overall would be markedly better than a player iron comparable.  One of the many benefits of the larger sole profile produced by a hollow bodied iron in the wider sole, which makes it quite a bit more difficult to drive the head deep into the ground.  When striking the ball poorly, the loss of distance is still palpable, but unlike the iron comparable, the ball still travels further than the golfer probably deserves.

Being able to incorporate a forged steel face is a great opportunity to once again bridge the gap for players between iron and hybrid.  What seemed present most in the testing of the Cobra King Utility Iron was a sound that resonates through much of their lineup, which could be best described as dense and full.  This is quite the change from many other club experiences in the current market, which can often times become talking points as the sound out performs the shot itself.  For Cobra, this subtle contact sound (something experienced with the King LTD Driver as well) let’s the shot do all the “talking” rather than the club. 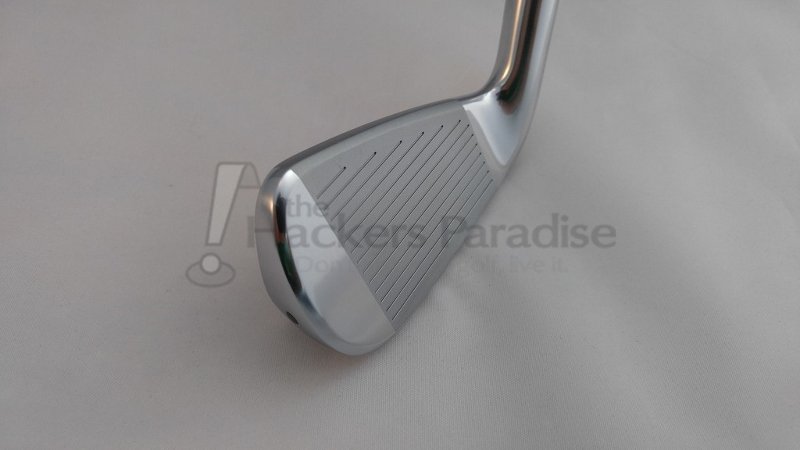 What produced the most intrigue for this reviewer, and many when the Cobra King Utility Iron was first discussed, was the inclusion of an adapter to a utility iron.  The concept in itself is a pretty incredible feat without making the hosel outlandishly oversize, and Tom Olsavsky offered these thoughts on construction; It was a little challenging to add the MyFly8 system into an iron, due to the shaping and offset of the head. However, with our CAD (computer aided design) tools, we were able to package this entire system and blend it seamlessly into the head shape.

When it comes to execution, it is hard not to be satisfied let alone impressed by the seamless inclusion of the adapter in the iron construction, almost to a point where one wonders why more have not been built into utility irons already.  With that in mind, beyond the sheer design of the hosel with the adapter built in, the next question has to be how functional it can be and whether there is a genuine benefit to having it.  There were two considerations with the adapter system during testing.  First, does the ability of changing lofts genuinely benefit or make sense for a golfer, and second to that, does it really work? 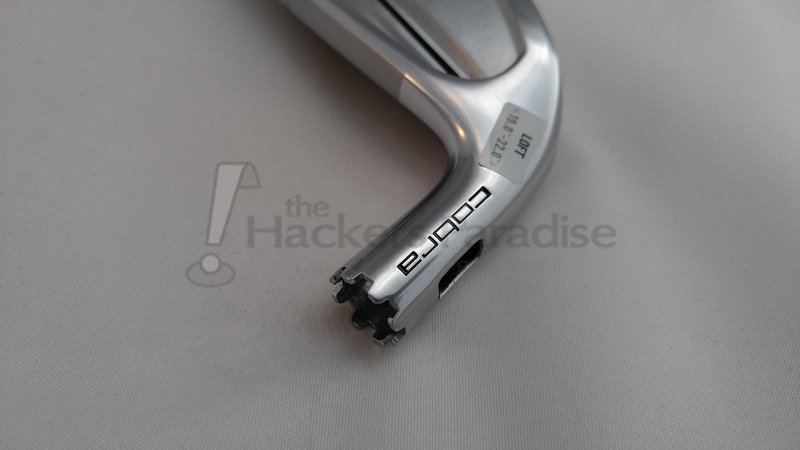 To the first point, the benefits of altering lofts came into play quickly upon taking to the range.  For most golfers, there is a range of lofts that make up their final iron, and first wood or hybrid.  In the first session with the Cobra King utility iron, all three of the golfers experiencing it had a different loft in their 4/5 iron, which would create a gap to the utility iron if not for the ability to alter the loft.  This makes the Cobra King Utility substantially more valuable than some of the utility offerings available that are limited to a specific degree, and also introduces an opportunity to get more aggressive on lofting if the intent is to keep the low lower on windy days for shorter courses off the tee.

As to whether it works?  There is no doubt that both the length of the shot and the height of the ball are altered by changing between the 18 and 21 degree settings.  At 18 degrees, a penetrating mid flight that carried and bounced well was seen, while with 21 degrees introducing higher launch with a slightly greater arc in flight, landing soft on greens yet still offering some roll when hitting fairways was experienced.  The change was less notable when altering to a draw setting, however this could be a reflection of twisting the head at address or the already existing draw flight being produced in the numerous attempts in those settings. 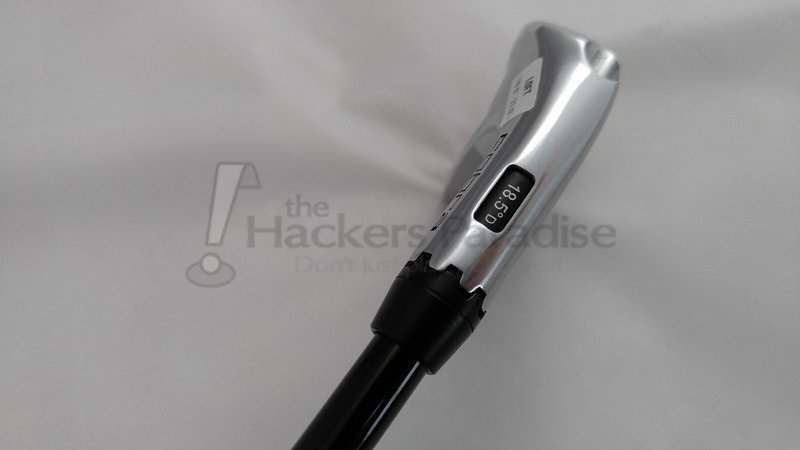 While golfers who struggle with launch and consistency may still lean towards the hybrid profile in order to get maximum results out of mediocre swings, those who are looking to bridge the gap between their irons and woods will find plenty of improvements moving into a Cobra King Utility iron rather than their 3/4 iron.  Powered by well placed tungsten weighting in the hollow body profile, launch and forgiveness are a welcoming experience in an otherwise unforgiving iron loft.  Now, golfers can tailor their loft and launch needs to suit their game, rather than the club with the MyFly adapter, and it seems like only the tip of the iceberg for Cobra’s innovation team.  For more information on the Cobra King Utility Iron, visit www.CobraGolf.com.