The world of golf has been getting used to seeing some unique shaped putters in the recent years. These days it does not matter what the flat stick looks like, all that matters is how fast it can get the ball in the hole. But what if more than just your putting is suffering on the greens? As we all get older we know it can be increasingly difficult for some to simply bend down to fix those divots and ball marks we leave behind on our approach shots. So what should we do then, stop fixing them? I certainly hope that’s not your answer! A company called WH Golf believes they have a solution for this problem, it’s a putter called ‘Double Duty” The Divot Repair Putter. 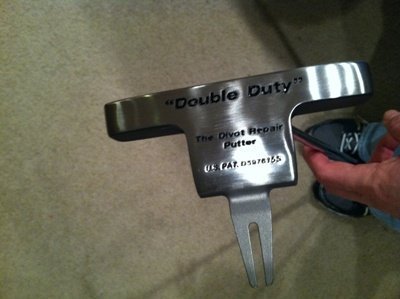 I’m going to be 100% honest here; this thing will not win any beauty contests anytime soon. The divot tool protrudes off the back end of the putter making it seem like you’re wielding a deadly weapon more so than a putter. But you know something, I don’t think sleek looks and beauty are really the primary focus of this putter either.

Once you get past the shape of it and what you get is a pretty nice looking finish on this putter that is made of 431 stainless steel. It has a satin chrome finish on it so you don’t get a terrible glare on nice sunny days on the course. Looking down at the putter from the address position you have an easily visible white site line so again if you’re able to focus on the finish and the site line rather than the site of the divot tool on the back you’ll likely be quite pleased with the look. 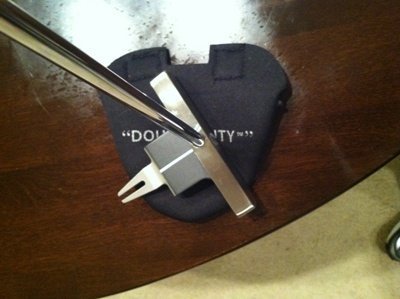 Technical Specs from the company:

“The club professionals in particular like the material used in making the club as well as the club weight. They are very impressed with the balance of the club and how true the putt is when using the Double Duty™. The fact that the club is manufactured with a 72° shaft angle and standard 36″ shaft length conforms to the majority of putters offered.

The Double Duty™ divot repair putter was submitted to the USGA and after review, the determination was made that the putter conforms to The Rules of Golf. This ruling will allow the putter to be used in any golf event. Due to the fine craftsmanship of this club, it should last a lifetime.” 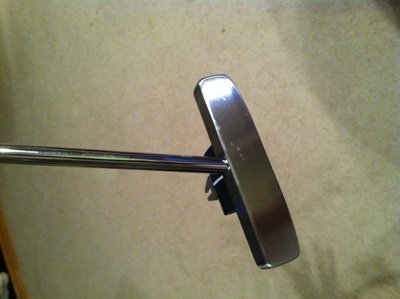 Testing was performed over the course of a few weeks on both the functionality of the Double Duty as a putter and just how well it worked as a replacement to all those divot tools you have in your bag. First of all staring out I was afraid of the distraction of the looks but after just a few putts I was over this and found that I really liked the feel of the ball coming off this putter. The 431 stainless steel gives the putter a feel that is not too harsh but still felt a little on the firm side to me. The sound coming from the putter supported the feeling of firm but not hard as well. I personally didn’t like the 36” length as my normal everyday putter comes in a 34” so if I were to game this full time I’d definitely be looking into shortening the shaft a bit.

On the company’s website they go into great detail on how to use the Double Duty to repair ball marks on the greens. This could be a daylong clinic around most golf courses as it seems that nearly everyone has a different technique and nobody really seems to know which method is truly the best. The Double Duty should be used to “pick at” the divot rather than to attempt to get under it and pry it up. In my testing the only way that really worked for me was to pick at the divot anyway so this completely supports their method. I had a lot of trouble early on with my coordination on getting the divots repaired properly. At first I found myself pulling the divot tool out still just to touch up the areas that I ended up butchering until I had a little more practice. By the time my testing was wrapping up I was able to get a better handle on it but it never really ended up being overly simple.

I was impressed with the functionality of the Double Duty as a putter, after adjusting to the look and the length I found that I liked the roll and had no problems getting putts on my intended line and holing my share as well. As a divot repair tool however I wasn’t sold on it, I felt like I did more damage in attempting to repair the divot than anything. Sure after some practice I did become more efficient at this but I still believe that it’s just easier and quicker to use the divot tool I’ve used for so many years in the past.

Personally I’m not at the stage of my life where it is too difficult to bend over and repair a divot or ball mark on the greens. I find the tried and true method of using a handheld divot repair tool or even a tee something I’ve mastered by now and can do without paying any attention to my technique. It takes all of about 3 seconds to get a pretty nasty divot back together to allow it to properly heal. That being said, I’m sure there are folks out there who do struggle with this seemingly quick and simple process and if the option is to not fix these blemishes or invest in a Double Duty I’m all for the later.

The Double Duty Putter is available directly from the website at www.divotrepairputter.com and the cost is $79.95 for the standard, $99.95 for the belly and $119.95 for the long putter model.