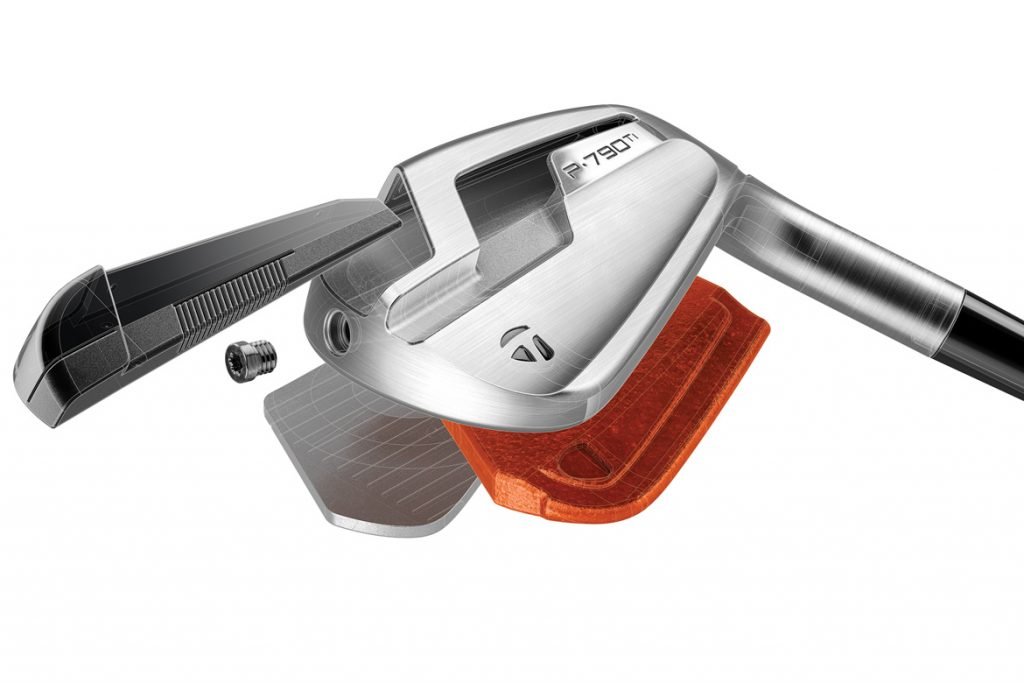 TaylorMade P790 Ti Irons
TaylorMade has officially jumped headfirst into the ultra-premium iron market and is looking to make a gigantic titanium splash in the growing market with the launch of the P790 Ti irons. Building on the massive success of the original P790 irons, TaylorMade has taken a proven game improvement design and re-engineered it with technology that is anything but conventional. And, as expected, they come with an ultra-premium price starting at $2,799.99.

So, what is the main building block in what TaylorMade calls a first-of-its-kind triumph of engineering? Titanium. A whole lot of titanium.

So why titanium? Well, it’s expensive, it’s beautiful, but most importantly it’s much lighter than conventional metal alloys used in iron designs while maintaining excellent strength to weight properties. The weight savings afforded by a titanium frame allowed TaylorMade to fundamentally redesign the P790 head and take certain club design principles to the extreme. The premise is this is that when you remove a bunch of weight from the frame, you can get creative putting it back in and place it exactly where you want, which will alter club properties and characteristics in ways not possible using conventional materials. Enter, P790 Ti. 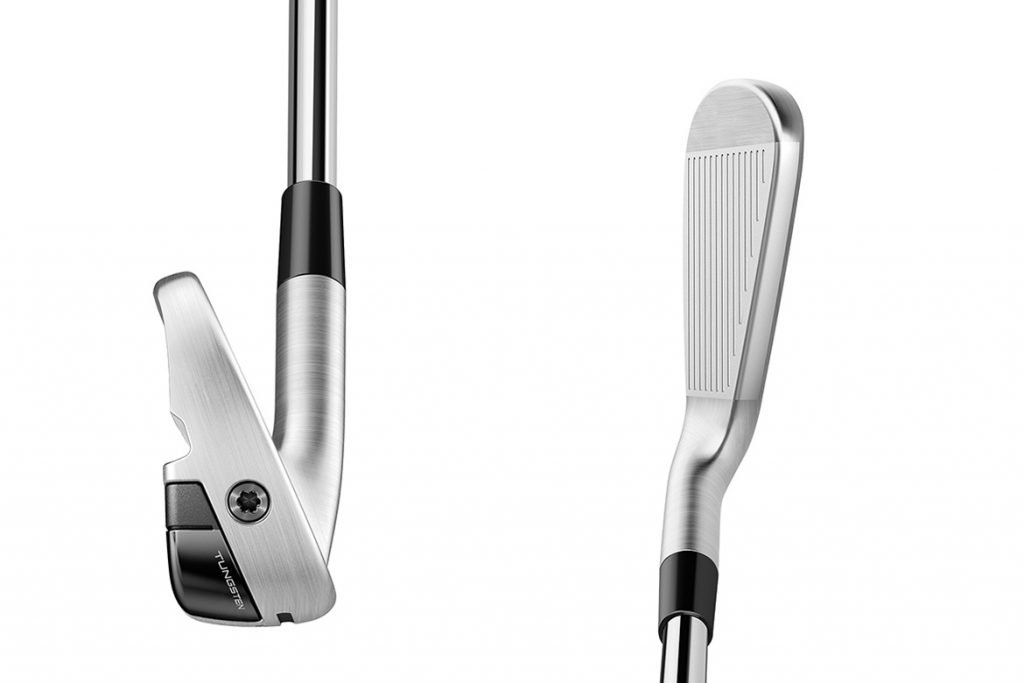 The P790 Ti frame features a whole lot of titanium. The P790 Ti hollow body is primarily composed of a 9-1-1 titanium, which is the same kind that TaylorMade uses in its drivers and metalwoods, and with a strong and durable 6-4 titanium face.

With the frame in place, TaylorMade got to be creative – all the weight savings went back into the head exactly where TaylorMade wanted it to be. Most noticeably, TaylorMade engineers placed visible extreme tungsten weighting (up to 119 grams!) low in the back bar of the head to lower the center of gravity (“CG”) in each club. Like really lower that CG. According to TaylorMade, by placing the tungsten low in the back bar the P790 Ti has the lowest CG of any P series iron. This low CG promotes a high launching, lower spinning shot and should promote some really, really long distances. I told you they took club design to the extreme.

As with the original and new P790 irons, the P790 Ti are also injected with TaylorMade’s SpeedFoam, which is a urethane foam that is injected into the hollow body to improve feel, sound, and to support a thinner face and promote higher ball speeds. The P790 Ti irons also have at least one Thru-Slot Speed Pocket (like the other P790 irons) designed to expand the flexible area of the face.

The improvements didn’t stop there, however. Addressing a common criticism with the original P790 irons, the P790 Ti have Progressive Inverted Cone Technology designed to provide better gapping throughout the set, ultimately making the scoring irons more consistent. 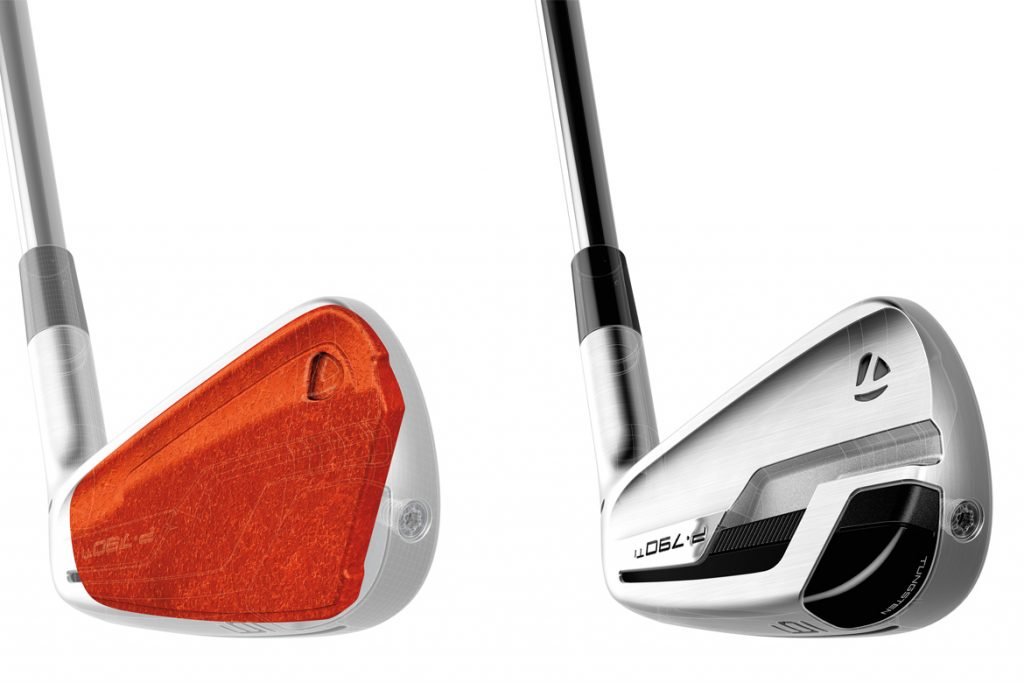 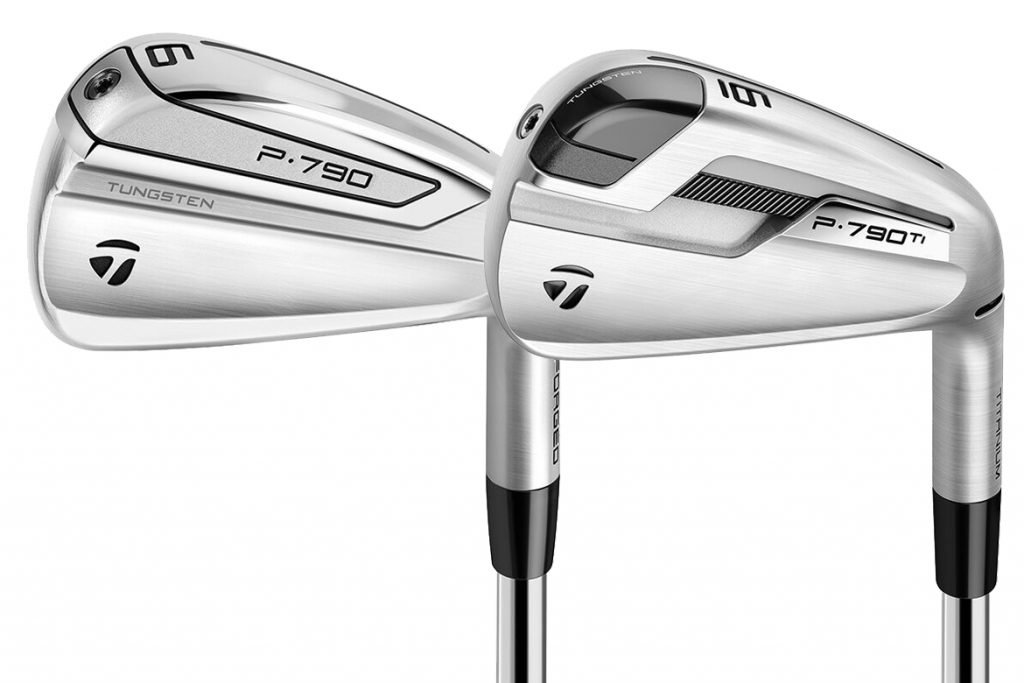 TaylorMade P790 Irons
TaylorMade has been putting out some fantastic irons over the past few years but the P series irons have stood out among most of these offerings. Most notably, two years ago TaylorMade released several very popular P series irons that offered something for all handicaps. But even among the P series irons, the original P790 stood out by packing a ton of technology in a surprisingly small, sleek body, and as a result were popular with a lot of golfers. Given the small, sleek look and the technology inside, it should be no surprise that the original P790 was TaylorMade’s number one selling iron at times. So how does TaylorMade improve on the success and performance of these irons?

Today we got to find out, as TaylorMade announced the new P790 line. Rather than start from scratch with the very popular iron, TaylorMade aimed to refine the design and technology in the original without fundamentally changing its underlying DNA of the club. In other words, TaylorMade is replicating what worked in the original and trying to perfect what needed adjusting. Although the name is the same, the new P790 irons include plenty of new technology.

First, the new irons will have a 7% thinner face than the original, and as a result, the new P790 face will be “hotter” than the original and with a higher COR (Coefficient of Restitution). In addition to a thinner face, the new P790 irons now have Progressive Inverted Cone Technology to provide better gapping throughout the set. The Progressive Inverted Cone Technology should be a welcome addition in light of the common critique that the gapping in the original P790 scoring irons could be occasionally inconsistent. 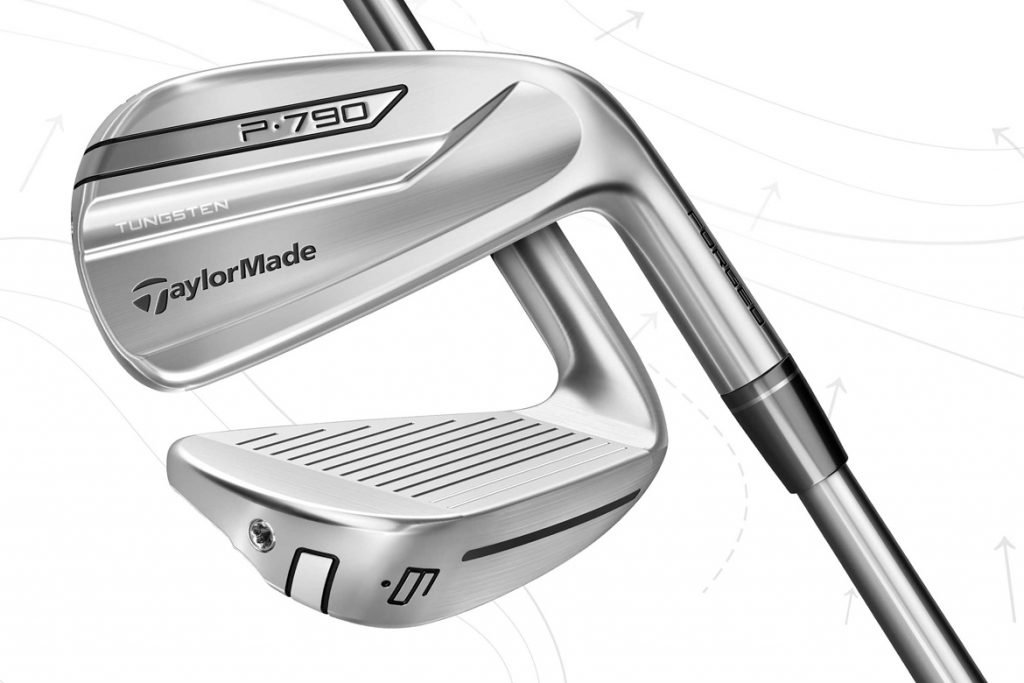 While it isn’t the same as the new ultra-premium P790 Ti, TaylorMade achieved mass savings by thinning the face, along with removing some mass from the high toe area of the iron frame. This provided TaylorMade with some discretionary weight that it could better position.

Using the weight savings, TaylorMade engineers increased the amount of tungsten in the iron heads by 15% and placed it deep and low in the head, which lowers the center of gravity compared to the original. This change is designed to provide additional forgiveness and launch. The new P790 irons also feature the Thru-Slot Speed Pocket that was present in the original irons, which are designed to maximize ball speed on miss-hits.

Rounding out the design, the new P790 irons feature a forged face and a soft, hollow body construction filled with SpeedFoam. Like the original, the addition of SpeedFoam improves the feel and sound of the hollow body while supporting the thinner face in these new irons for better ball speed. 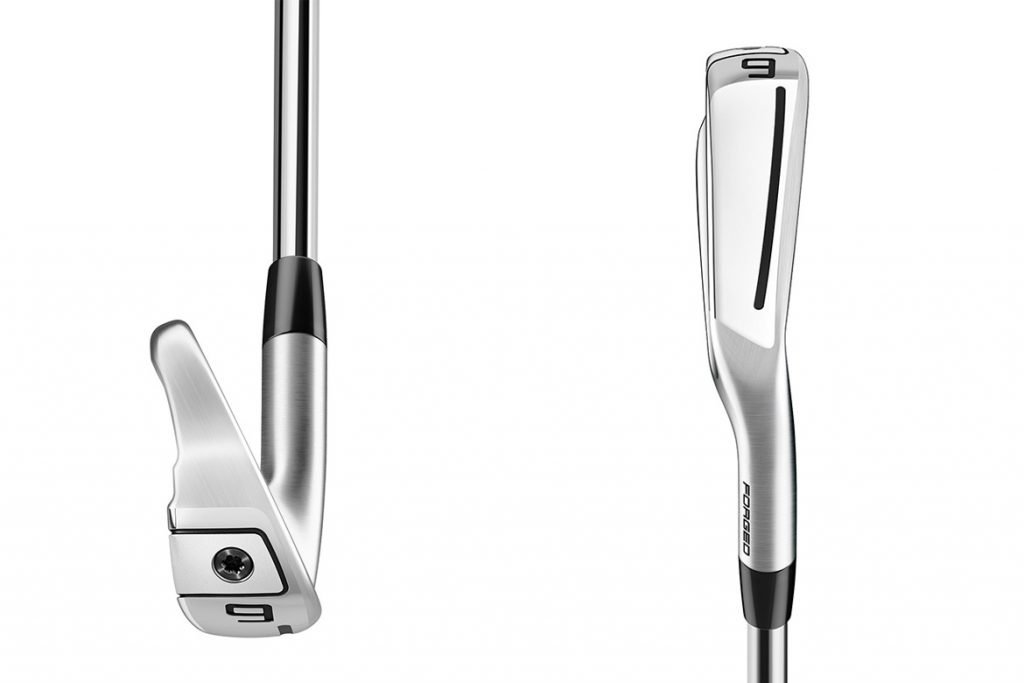 Finally, the TaylorMade designers made minor tweaks to the popular shape of the original. Performance-wise, the sole radius was altered to decrease the propensity to dig into the turf. And the long irons (3i-6i) were altered to have progressively less offset.

Aesthetically, the new P790 irons feature shorter blade lengths in the scoring clubs and a cleaner topline and progression between the irons. The result, according to TaylorMade, is a more visually appealing appearance. 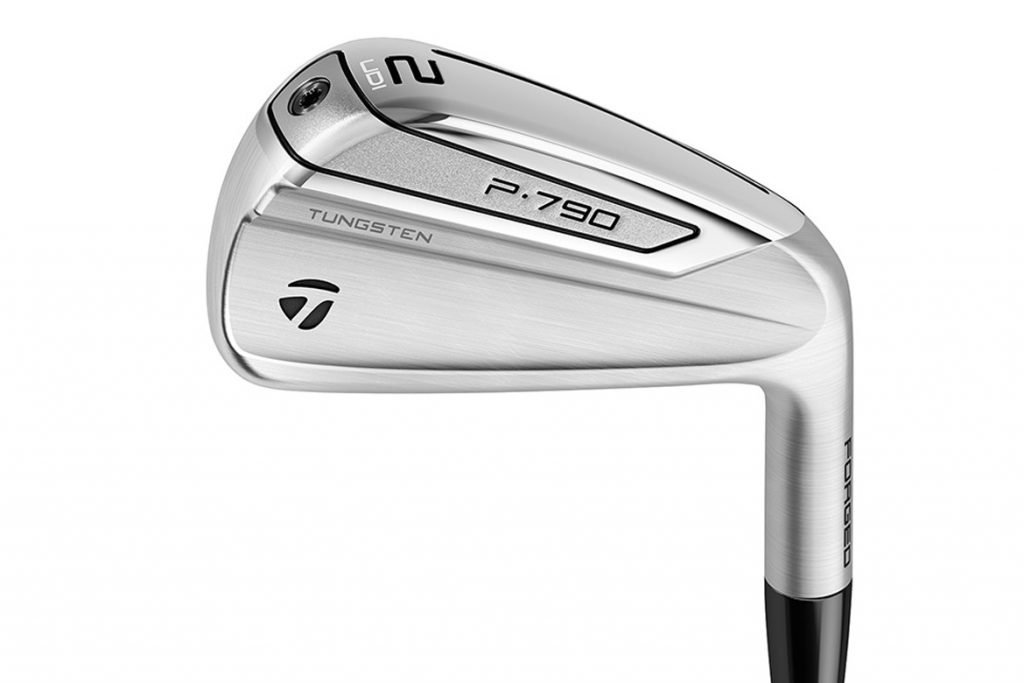 TaylorMade P790 UDI
To complement the new P790 irons, TaylorMade is also refreshing its tour-inspired driving iron, the P790 UDI. For those who want to play a 2-iron driving iron, the original P790 UDI was very popular and provided excellent ball speed when well struck. With the new P790 UDI, TaylorMade aims to add more forgiveness on miss-hits, enlarge the sweet spot, and increase the MOI of the club (the ability to resist twisting at impact on off-center hits).

The new P790 UDI has a smaller inverted cone compared to the previous generation. This smaller inverted cone allowed TaylorMade engineers to reduce the thickness of the face at the periphery and increase flexibility low on the face as well as near the heel and toe. This is similar to what they did with the M2 fairway woods to provide ball speed and its implementation into irons should result in the same. Why? Because increased flexibility away from the center means better ball speeds on off-center strikes and the result will be better playability to those of us not on tour. 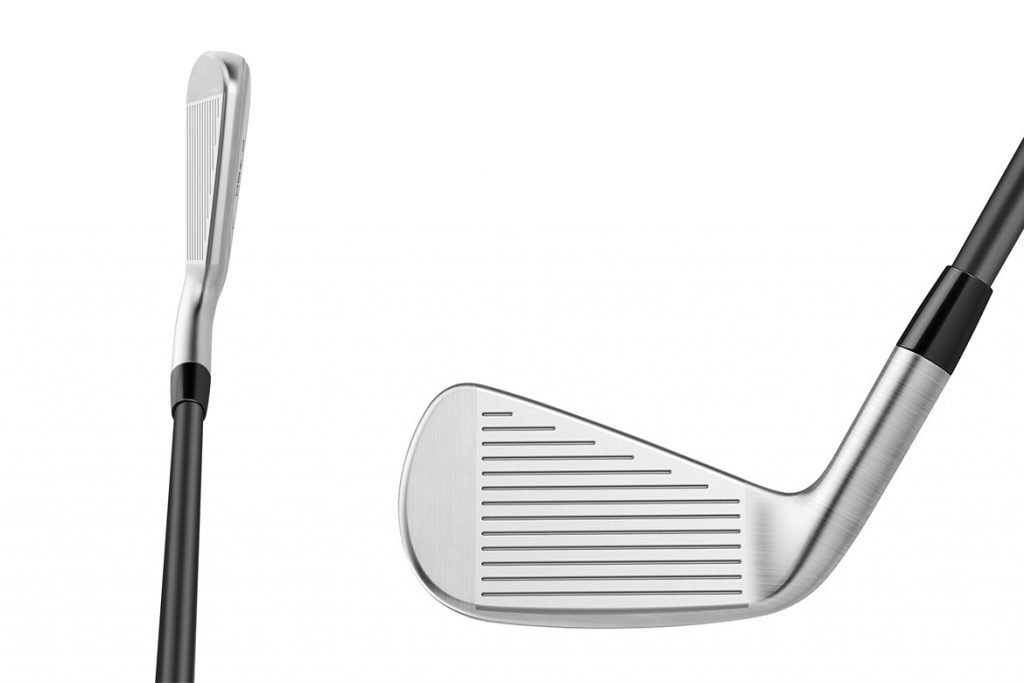 The new P790 UDI comes stock with Project X’s Smoke Black shaft, which is a low launching and low spinning shaft. This decision should be well received by those who liked the Project X HZRDUS Black shaft in the original. Custom shafts pairings are also available.