RealPretendPsychic said:
Are you just feeling more confident and consistent with it? Did it improve your feel at all?
Click to expand...

Loft change didn’t alter the sound, so feel is unchanged (sound is feel).

Jman said:
And the fact that it’s just not a great putter
Click to expand...

It just doesn't feel good... At all. No matter how many times I try it

chile said:
It just doesn't feel good... At all. No matter how many times I try it
Click to expand...

Jman said:
Their inserts are just not good, and they refuse to really step outside their comfort zone and try anything new. It’s a shame.
Click to expand...

i think the biggest "problem" is that i love the feel of the elevado more than any other putter i've tried/played. that's not a bad thing, tho.

Put the Golf Pride Pro Only green cord on the Evnroll ER5B.Coming from a bigger softer grip.. Love this grip and in combination with the milled face of the putter the feel is fantastic. Really putting well with this combination. I think I have found my putter grip.

chile said:
i think the biggest "problem" is that i love the feel of the elevado more than any other putter i've tried/played. that's not a bad thing, tho.
Click to expand...

Holy schnikes! That's one hell of a practice green. I could spend all day on that thing . So jealous!
-Sean

vintagebob said:
Out practicing my putting…
Click to expand...

what a gorgeous view and setup!!!!

After getting my specs from the CC putter fitting, I decided to pickup a Scotty Cameron Special Select Flowback 5 to use until my CC putter arrives. I'm enjoying it so far...

I also plan to muck with the head weights in my face-balanced Odyssey 10 and 7 to see if I can create enough toe hang to possible game them. I'll do the same with the Mizuno VI, if it ever arrives.

Heading back down the Super Stroke rabbit hole again. Just put a Mid Slim 2.0 on one of my SeeMore mFGPs. It has been a few years so I figured what the heck. So I currently have the full array on my 3 FGP head shape putters. The SS Mid Slim, a small (by today's standards) pistol and a very large 2 Thumb.
Driver:

Practice green has been punched, so Plan B.

My putting is actually improving.

I stopped trying so hard and putt with less deliberation over the ball. More relaxed? I have additionally started to incorporate a reading routine where I simply force myself to look as I walk up to a green, walk around the putt, and use my feet to help my eyes (thanks for the tip snicks!). I am starting to realize I read greens better than I think. I would, however, overrule my read while standing over the putt (overthinking), and that never turned out well. I am starting to have more trust and confidence. I swear on many putts I am seeing the line in some visualization way. I like that.

A putter change also seems to be helping. I like the flowing feel of toe hang, and the m-craft IV sits perfectly balanced at setup. I can line up the putt and release my hands from the putter (taking out tension) without having the head twist or shift in location. I can't do that with the 2-ball ten S. That gives me confidence that all I have to do is rock the shoulders and the putter will come through in position. My stroke can arc all it wants. Face will be square. I also greatly prefer the feel of a milled putter. Mizuno hit a home run with the m-craft line.

I fluff my gimmies.

Tevenor said:
Holy schnikes! That's one hell of a practice green. I could spend all day on that thing . So jealous!
Click to expand...

"Always remember, there are no bad rounds, just high scores."-ChristopherKee

I fluff my gimmies.

For years and years, I played Rossie 2 face balanced putter, convinced I was a SBST kind of guy. A few years ago, I swapped into an Odyssey #9, (with an alarmingly short shaft for most people, lol), and continued my SBST ways. A couple seasons ago, I realized I have a tendency to take the putter back outside the target line and bring it inside for the stroke. (A Jim Furyk style swing, except on the horizontal plane) Last season, I started to just swing the putter with no attempt to SBST it, developed an arcing stroke, and seem to be putting pretty well. An odd thing, though, I feel like I'm "guiding" the ball with the putter for different breaks. It feels pretty natural, and the putts seem to be going where I want. (With my tragic habit of burning the left edge of the cup notwithstanding.)

"Always remember, there are no bad rounds, just high scores."-ChristopherKee

Hamfist said:
Is this an odd thing?
Click to expand...

I think I'm going back to my vault 2.0 anser for league play tonight. Looking back on my round last week I have 3 3 putts and lipped out 4 times(twice on the same hole).
Want to know what's in my

vintagebob said:
Practice green has been punched, so Plan B.

Love this Golf article with Aaron Baddeley. My wife has the worst technique, rarely repeated setup, yet she makes more putts and hits the pin (she needs to learn pace) than anyone I play with. When asked what her secret is, she says, "I don't need to worry about all the details, just hit the ball to the hole..." One of our best friends had his career best the day after playing with us. He said he just kept putting the ball at the hole... 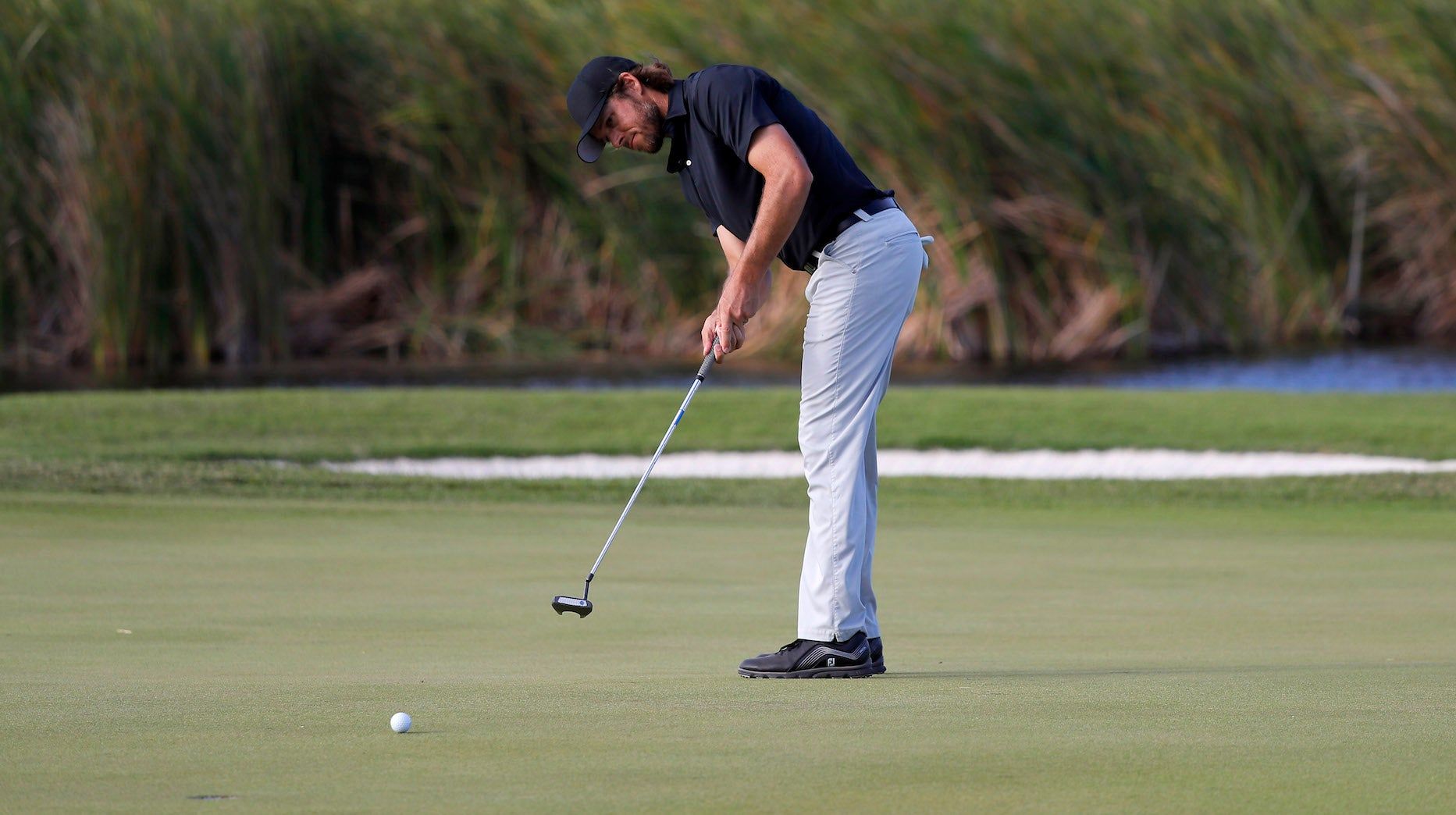 Putting can be difficult, but it doesn't have to be. Here are 3 things I learned about putting from Aaron Baddeley, with drills to help!

“I just putt…I just try and hole it,” Baddeley says. “It sounds funny, but it’s like throwing a ball to first base. When you pick it up at shortstop, you’re not thinking of how to plant your feet. You’re not thinking of what position your elbow needs to be in, or when you’re going to release it…you just sort of look at where you want (the ball to go) and putt to it.”

Meeting a buddy today for a practice session. We are convening at his course which is an exclusive private club with amazing facilities. I love when he asks me to go there to practice together. Massive range, enormous putting green complex (perfect condition), numerous areas for working on chipping and pitching, and so on. They pretty much litter the place with TM TP5x practice balls. He wants me to bring all of my putters, which I am happy to do. They also let us take out any putters from the pro shop, and I will take full advantage of that opportunity.

Anyway, putter banter. He has had the yips with longer putts (and most chipping) for the 2 years we have played together. It is crushing his golf passion. I don't know that a putter change will help, nor do I know how to help. He regularly asks me for ideas. I always say keep the same tempo, as that is what I work on with longer putts. My understanding with yips is that it is an unconscious action, usually by a dominant hand/wrist. Figuring out a fix likely takes significant changes and time. It really is hard to watch. I've seen him literally whiff longer putts multiple times in a row. I hope he can figure out something. He's a good ball striker and is solid with mid-range putts. I don't know how he does with short putts, as he always picks those up. He has huge strong hands -- competes in some martial art -- and those giant mitts seem to take over and do some funky things. He's one of the nicest, worldly, interesting people out there.

Jman said:
Their inserts are just not good, and they refuse to really step outside their comfort zone and try anything new. It’s a shame.
Click to expand...

I changed from the Toulon Atlanta to the TM TP Patina Ardmore 3 with the thicker PureRoll aluminum insert and I like it so much better.
Funny how we as golfers like one thing over another just by feel.
In my

Good putting session for 1.5 hours. Main thing for me is that green is huge, 100+ foot putts, if desired, are trivial. I just put myself in the middle and hit to different flags working on lag putting. Awesome session. Two different views.