When Nike introduced the Vapor Irons lineup for 2015, they did so with the ambitions of having a family of irons that could reach out to the full gambit of golfer demographics. The Vapor Pro was a new take on a bladed iron, the Speed for golfers who needed maximum forgiveness, and the Pro Combo was an iron set that carried the iron size and look for the aspiring golfer who still needed some forgiveness. While all of those irons accomplished what they were intended to, Nike recognized that there was a larger gap between the more forgiving Speed (replaced in 2016 with the Vapor Fly) irons and the Pro Combo. To help fill that void and offer an even more complete iron offering, Nike brings us the Vapor Fly Pro irons. 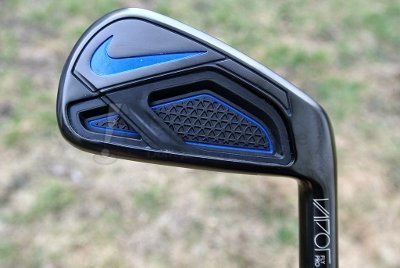 At its most simplistic form, the way to describe these irons are by saying they are attention grabbers. Slated in a market that is saturated with irons that have a chrome or satin finish to them, the Nike Vapor Fly Pro irons garner a black finish on them that is sure to make them stand out in a crowd. Last year the Swoosh was covered in Volt, while this year it has been replaced with Nike’s new color Photo Blue. The black and blue look might be a bit polarizing, however at the end of the day the combination of them is pulled off quite nicely. Speaking of the finish, it is something that might be more of a concern for players who tend to have them in the bag long term. As has been seen in the past with irons and wedges that have a black finish, a considerable amount of wear can be expected over time. 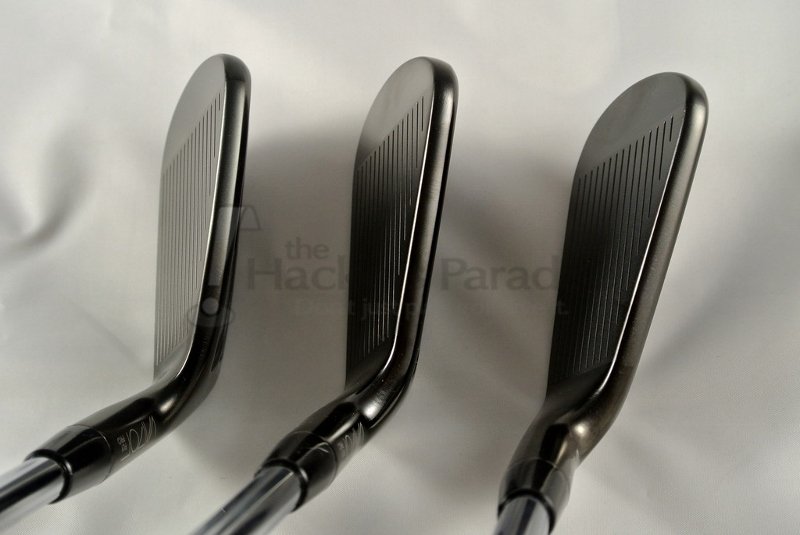 Moving on from the color of these irons, let’s talk about the profile they provide. With the ideology that these irons are going to split the gap between the new Vapor Fly and Vapor Pro Combo irons, the size of the iron heads are what one would expect. The top line is a slender-medium size, nothing that will give those players who prefer a narrow top line any cause for concern. A mid-sized blade length is met with a slight amount of offset, again as one can tell these irons are geared to have more of a players-style look. Cap it all off with a sole of medium width, that features a nice beveled leading edge to assist in making better ball contact and cutting through the turf. 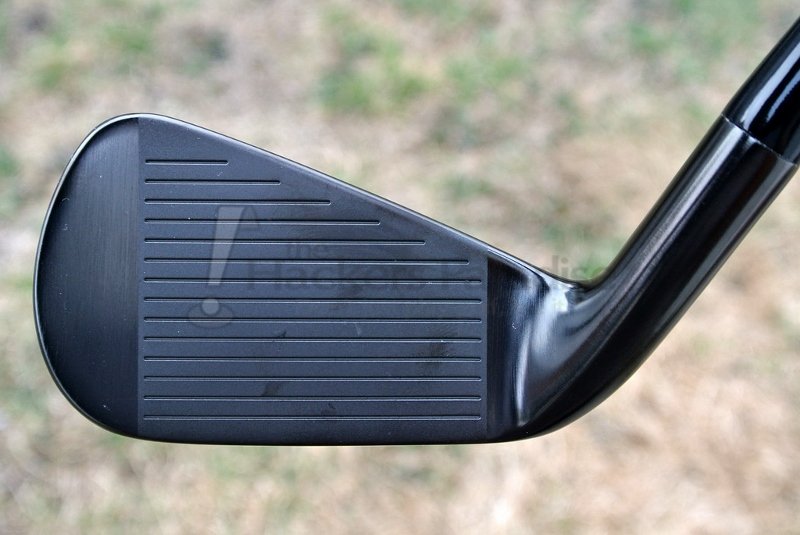 Picking up where they left off with the Vapor irons of 2015, Nike has gone with a progressive set by utilizing multiple body styles that make the Vapor Fly Pro a unique set. Starting off with the construction of the long irons, Nike has gone with a hollow body design. To go along with the hollow design and the use of RZN (pronounced resin), the CG placement on these irons are pushed lower to help achieve higher launch, more ball speed, and more forgiveness. Looking at the cavity of the long irons, one will notice that they are filled in a little bit more than others within the set, this helps accommodate the hollow design. The biggest difference however will be the change in sound that the longer irons produced compared to the others within the set. When making contact, the sound that is produced has a louder, hollow-thwack noise that is heard. 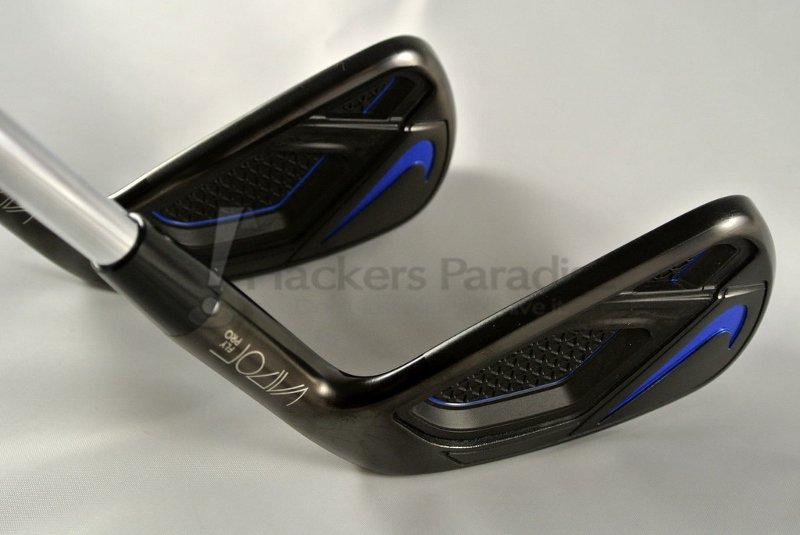 Moving down the set to the mid and lower irons, the hollowness of the irons fades away rapidly. Upon reaching the 6-iron, the hollow body design gives way to a RZN Pocket cavity, which then dissipates at the 9-iron.  Scoring irons are composed of a RZN filled cavity, which will help enhance feel while providing an iron design that helps players manipulate the ball flight for those precision shots in to the green. Unlike going from the low irons to the mid irons, the change of sound is not prevalent and is a much smoother audible transition when changing between the mid and scoring clubs. Since the sound is different, most golfers will be provided with a belief that the mid and low irons garner a better feel while offering more feedback on contact

The shaft choice for these irons is one that might catch some off guard. Nike partnered with True Temper to have the XP95 shafts as the stock offering. The XP95 is a more than capable shaft and is indeed popular, however it is a shaft that the market tends to find more frequently used in irons that are aimed at achieving more distance. The profile helps get the ball up in the air quick and offers a mid-spin profile, all while being in a more lightweight package. Really, the question of the shaft choice comes with the naming convention and target demographic of the Vapor Fly Pro irons. More times than not, when consumers see the name Pro included in a club name, it leads to the stereotype of a heavier club designed more for precision instead of being built for distance. Those looking to go heavier can do so with Nike’s custom catalog, as they offer plenty of other shaft options. 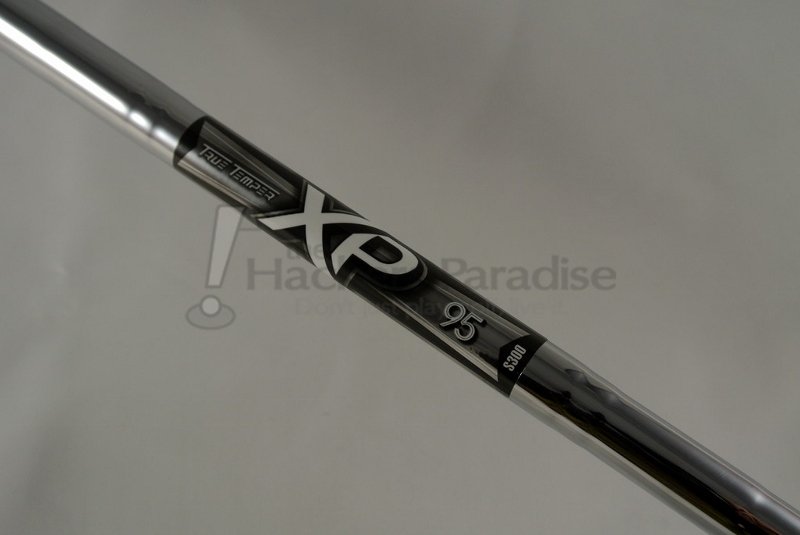 When it comes to the actual performance of the Vapor Fly Pro, they actually make you forget of the somewhat industrial look of the cavity. As was mentioned earlier the topline of these irons is relatively thin with a blade length that is somewhat squatty. From address the set blends together incredibly well as it’s hard to tell which iron head has the different internal structure. The shots that these clubs are able to perform have been really good and consistent. While the distance is not the longest, the numbers that were produced shouldn’t be scoffed at. 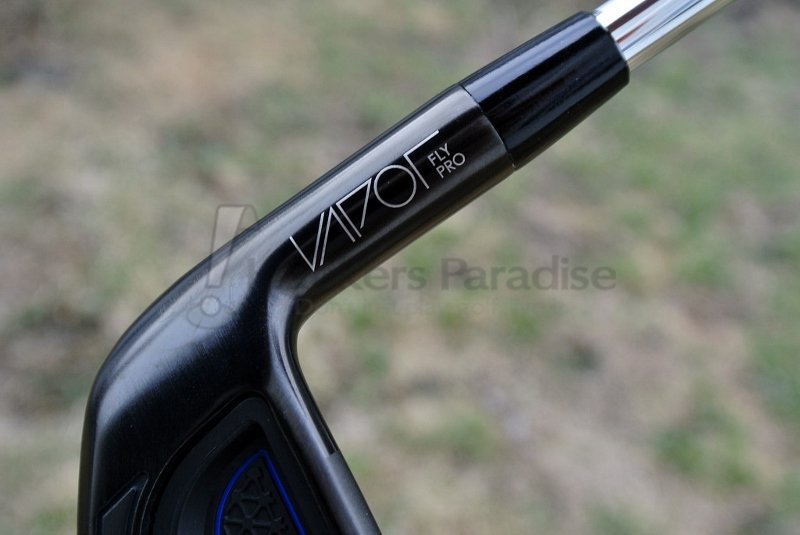 Thanks to the above mentioned construction and shaft combination, these irons produce a ball flight that might surprise some. With the different types of RZN that Nike has used, these irons do have a nice low center of gravity. By achieving a nice peak height, with a touch more spin, there should be no cause for concern of having one of the long irons holding a green.

Being that these irons were made to be more of a gap filler between the Vapor Fly and the Vapor Pro Combo irons, one should expect to see that the forgiveness of them falls right in between them. In 2015 golfers who found the Vapor Pro Combo irons to be a bit too demanding for them, will likely be happy with what Nike has pushed out with the Fly Pro. Thanks to the Modern Muscle design, shots that were hit out towards the toe side of center, were found to have retained ball speed much better than those struck on the heel side. Those shots also held their line without producing too much of a toe-hook shot shape. These are not made or marketed to be a massively forgiving iron, however with that being said, for an iron that has a player’s style shape to them, the performance is relatively strong. 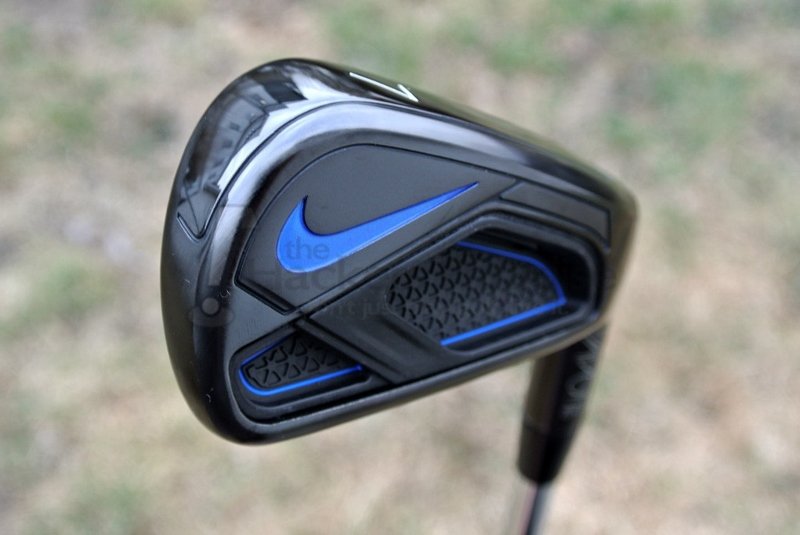 Keeping up with design elements that Nike has included on their irons in the past, the Vapor Fly Pro sole utilizes a beveled leading edge on the sole of irons. What this does for these irons is aid in turf interaction by providing a smooth feeling through contact.  It will also help for those who tend to get a little steep on the ball by having a slightly softer leading edge, giving little relief when it comes to those heavy or fat shots. 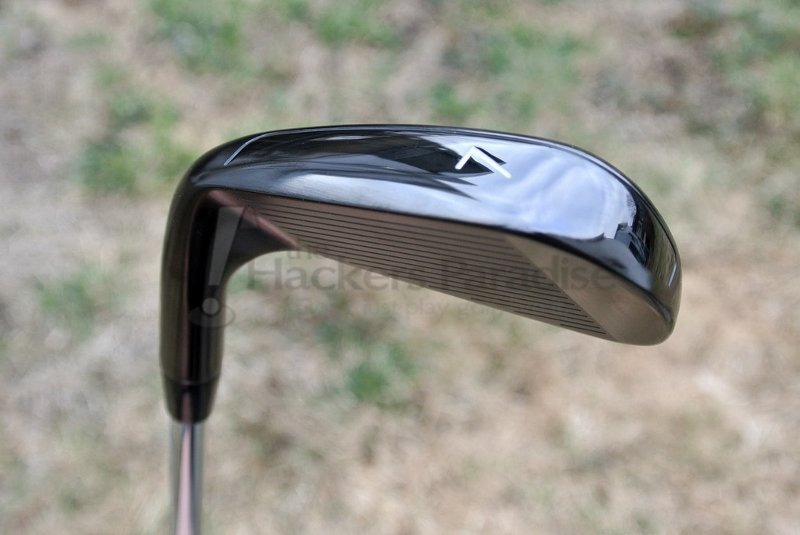 For 2016 Nike decided to add to their current crop of irons by filling in the gaps that were created with the launch of the Vapor irons. The result is an iron offering in the Vapor Fly Pro that should fit the bill for many golfers with both low and middle handicaps. Those players looking for an iron that sports a more compact head with less offset should take notice of these irons. Without question, the marketplace has grown with iron sets that carry similar characteristics, which means it’s wise to get out and test these irons vs the competition. The Vapor Fly Pro irons might not overwhelm in any particular aspect, but they do offer a very nice balance of all around performance. Players who would like to purchase a set of these irons can do so now for a price of $899. More information, as well as a list of custom shaft and grip options, can be found at www.nike.com.