The latest Nike iron release brings forth a visibly loud statement design and in the popular Volt color.  Highlighting the familiar “swoosh” in the iron series, it often leads to a conversation starter after being spotted from a distance.  While the logo brings this player caliber iron to life in discussion, the technology built into the Nike Vapor Pro irons tends to drive conversation beyond color selection.  In short, there’s no denying the brand when eyeing the bag from a distance. 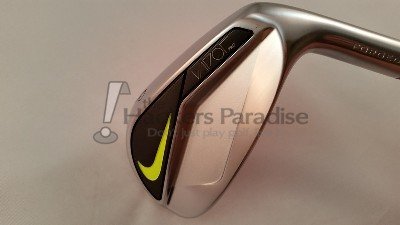 FASTER BALL SPEED – Modern Muscle geometry balances the CG in the center of the face for maximum ball speed, the highest stability and the purest feel. 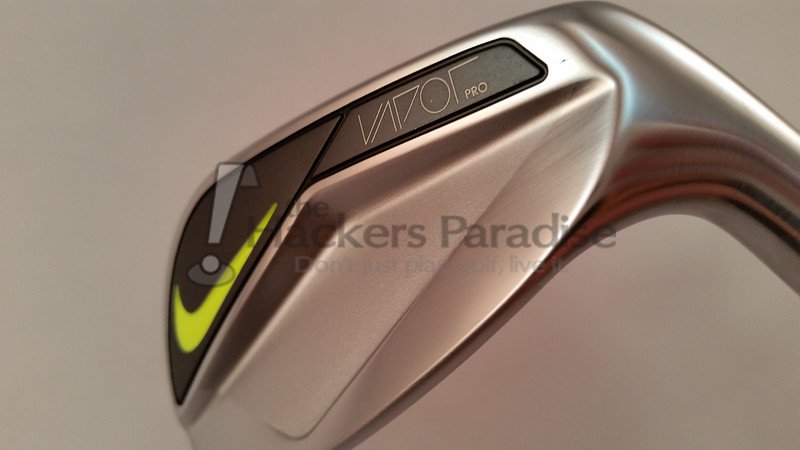 Out of the box, the Nike Vapor Pro irons have a sharp look to them.  The modern muscle technology is highlighted by a black finish and volt Nike logo, drawing the eyes instantly to the weight out towards the toe.  Rather than having the same finish throughout the head, Nike incorporated a matte finish into the subtle cavity, which creates a fantastic visual balance.

While purely aesthetic, the font selected for the iron numbering is sleek and elegant.  Suiting the iron profile well, the narrow lines make it easy to find each club in the bag, and look appealing to the eye.  The Vapor PRO logo is incorporated into the black finish and doesn’t jump off the iron unless the club is close enough to inspect, and the term ‘forged’ is stamped into the back side of the hosel, yet not paint filled. 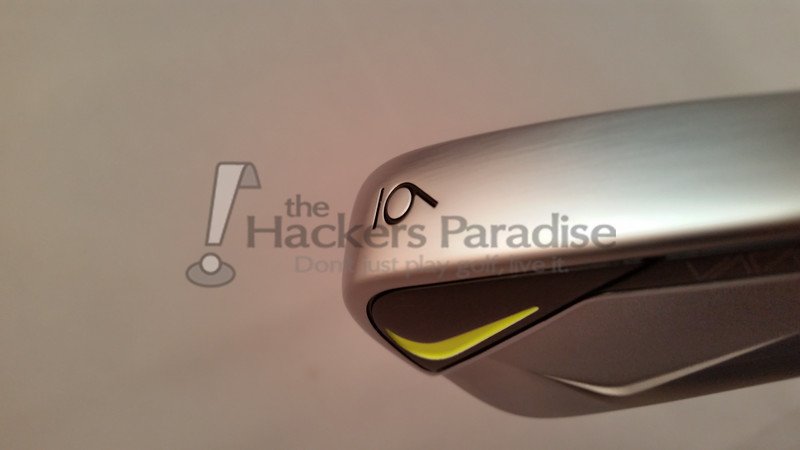 At address the Nike Vapor Pro irons represent workability and precision.  A slightly rolled topline introduces some confidence into the mind, yet doesn’t take away from how sleek the iron appears beside the golf ball.  Nike has incorporated a longer blade length into this release, which also increases confidence as compared to some of the smaller iron heads available today.  This change instilled some additional confidence, and with that, more forgiveness on strikes away from center.

The target audience for the Nike Vapor Pro irons is the skilled player who is pursuing a lower, penetrating ball flight for greater control and high end accuracy.  Testing showed mixed results on launch angle between various swing types, which represents how much of an impact each individual swing has on the flighting characteristics of the ball.  Workability for high shots and lower trajectory is prevalent, with each iron responding to the swing changes necessary to flight the ball. 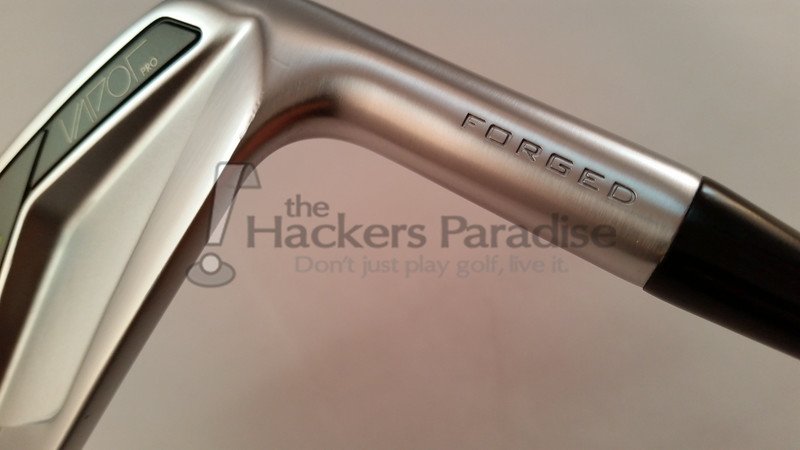 With regards to accuracy, the Nike Vapor Pro irons were impressively consistent with their responsiveness to each swing.  As expected with this head profile, perfectly struck golf balls traveled in the direction intended with the left/right spin dictating a small draw or fade depending on player or swing.

Performance on approach shots with the Nike Vapor Pro irons is quite impressive thanks to the X3X groove technology.  It’s not uncommon to see upwards of four to five feet of spin on the 7 iron with a mid launch, straight or draw flight pattern.  This provides the confidence to go flag hunting without the concern of driving the ball through the landing zone, and off the green behind the flag. 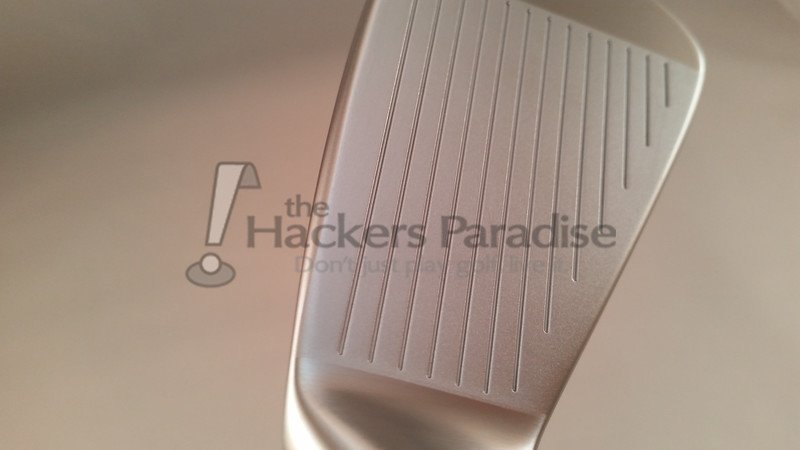 Distance was dictated heavily by launch and contact area on the face of the Nike Vapor Pro irons. Swings that were struck in the center of the face traveled to the expected distances, with little variance between strikes.  Balls striking the toe side of center offered improved stability and reduced distance loss versus a typical iron in this profile with the weight more neutralized in the center of the club.  Where this build seemed to struggle was on the heel side of center.  Notable distance loss and ball speed reduction occurred when the ball made contact toward the heel of the iron (yet still in the grooves).  This typically promoted some additional launch and a soft fade off the target line.  With this iron profile, expectations of distance loss are prevalent when the contact departs from the center of the club face; however this particular head design seemed to favor a miss closer to the toe.

One of the more notable features of the Nike Vapor Pro irons is the seemingly sharp leading edge.  Unlike the Vapor Pro Combo iron’s beveled leading edge, the Vapor Pros boast a turf hungry narrow sole profile that drives through the grass admirably.  Players of various swing profiles (steep, shallow, sweeper, digger) enjoyed how the irons interacted with the turf, whether it was driving the iron through the ground for a large divot, or hitting the ball crisp with a bit of grass flying after contact.

Beyond the turf interaction, it was quite easy to manipulate the shot shape off the Nike Vapor Pro irons to generate fade/draw and high/low flighting.  It is always refreshing to be able to dictate how the shot should be shaped, however these irons will certainly be geared towards those who prefer that level of flexibility. 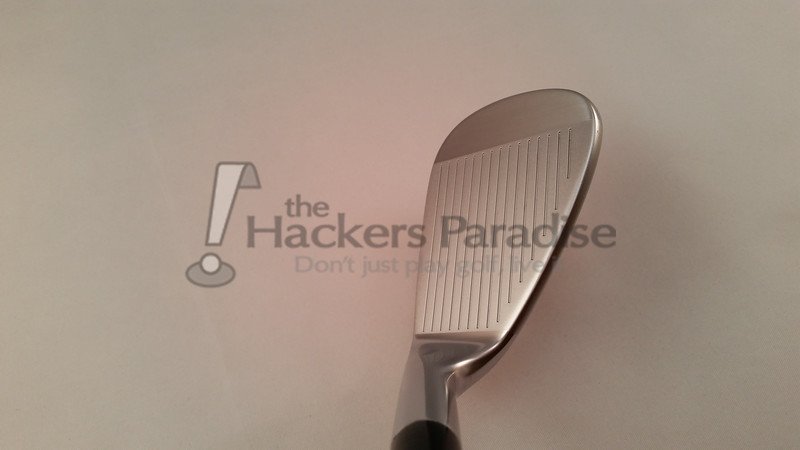 Striking the ball with the center of the iron face generates a very flush, encouraging contact sound, typical of any ‘player iron’ profile.  On the other end of the spectrum, the harsh reality of a limited profile iron comes to life, and large distance losses are experienced when contact is made well off center.  This is especially true on extreme thinned shots; however there is some forgiveness on how harsh the contact is when making contact slightly below center.

Unique to the Nike Vapor Pro irons as compared to other game enhancement irons is the sound produced by strikes off center.  Where one would typically anticipate a higher pitched click, a more muted, lower tone is created.  It isn’t all that pleasing to the ears; however it does offer a very audible difference represented between a great strike and mediocre contact.   This is not a reference to shots which make contact with the bottom groove or extreme heel/toe section, but more so that which is marginally off center. 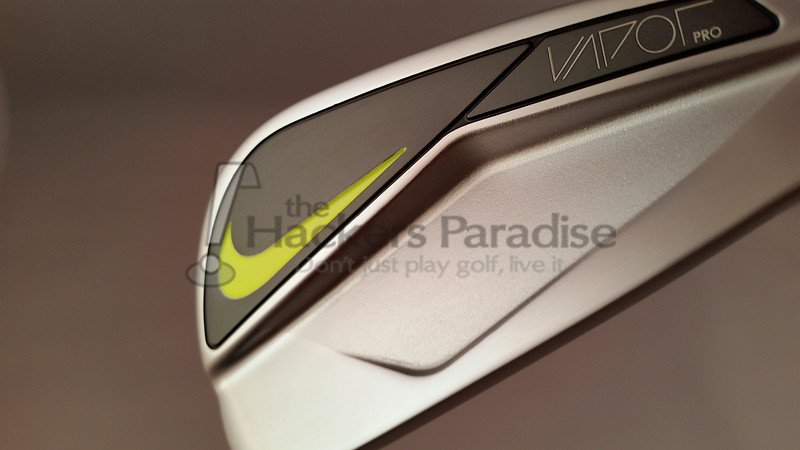 Where it seems the Nike Vapor Pro irons lack in forgiveness is inside center moving towards the heel of the face.  While the modern muscle technology offers solid feedback on shots more on the two side of center, a lack of mass behind the heel side tends to leave a harsher, weaker contact feeling.  Most of the time, this experience came with reduced ball speed and distance numbers, but this should be expected for an iron of this design.

Testing of the Nike Vapor Pro irons proved quite enjoyable.  They have introduced technology into a limited profile iron, allowing some forgiveness especially towards the toe side, while maintaining that true player look that many seek.  For golfers who favor workability and performance in a traditional top line, the Nike Vapor Pro irons will be a great option with the longer blade lengths and fantastic X3X grooves.  For more information, visit www.nikegolf.com.