60beat is a company that is more widely known to those who partake in running and cycling. The company’s devices have been able to transform an iPhone into a device that can work with a heart rate monitor, or for cycling, a Speed and Cadence sensor. The premise works really well due to that fact that nowadays people always have their phone with them. Taking a break from the fitness circuit, 60beat now takes aim at golf with the release of the Ranger GPS Watch. 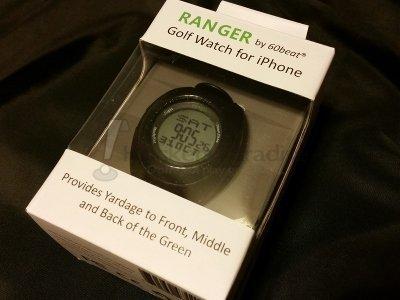 Get Distance to the hole on your Sports Watch – The 60beat Ranger Golf Watch and Golf Watch App combination transforms your Watch/ iPhone into the ultimate golf rangefinder. The 60beat Ranger connects wirelessly to the iPhone 4S, 5, 5S, 6 and 6 plus. It delivers distance from your location to the front, middle and back of the green.

GPS watches have gained in popularity recently. Instead of carrying around a standalone unit the size of a cell phone, it’s more convenient to just glance at a watch and determine what the next shot should be. When choosing between the numerous options of GPS watches out on the market, it comes down to selecting a watch that has the feature set a golfer is looking for. 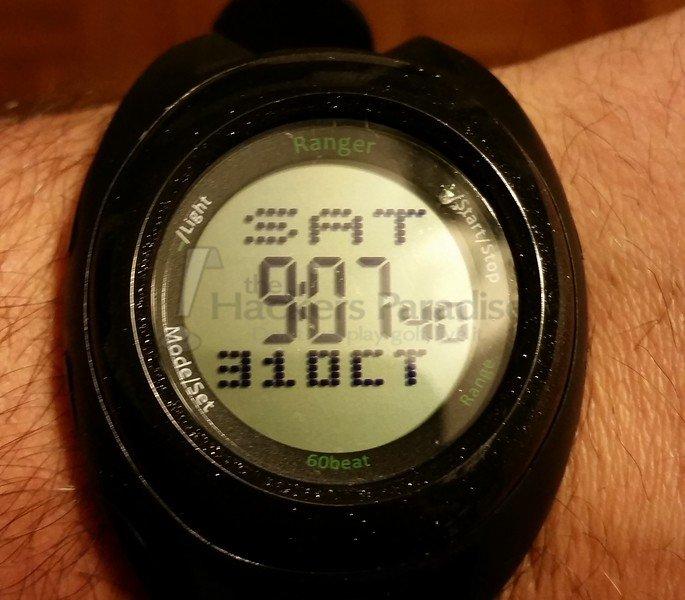 When pulling the Ranger out of the box, the very first positive feature stands out, this unit runs off of a normal watch battery. For any golfer who has lost a charge on their GPS unit, or forgotten to charge a GPS prior to a round, the inclusion of a normal watch battery is an aspect that is hard to not be excited about. 60beat tells us that this battery should last anywhere from two to three years before needing to be replaced.

Something that always comes up when talking about watches is both the look and the feel of the watch. While the look of the Ranger isn’t anything that is going to stand out, it doesn’t necessarily look bad. Perhaps the most distinguishing feature is the slightly glittery finish that is on the top oval around the face. The screen is a good size that allows the front, middle and back distances to be read with clarity. A basic rubberized watch band provides a comfortable feel around the wrist.

Before taking this unit to the course, the companion app first needed to be installed on an iPhone. Since the watch will not record distances without an iPhone, the app needs to be downloaded and paired with the watch. With the app installed, the pairing process took only a matter of minutes. Navigating throughout the Golf Watch app is also a smooth process. A course list is provided to show all courses available within 35 miles of your location. Once the course selection has been made, golfers can place their phone in their pocket, bag or cart and are ready to go. 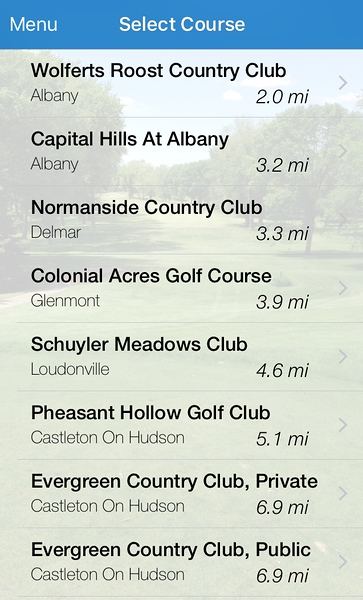 Similar to what is found on other GPS watches on the market, the watch face gives a player the yardages to the front, middle and back of the green. However, unlike other watches, those numbers do not remain on the screen, or calculate while moving. Instead, while moving in between shots, the time becomes the featured item presented on the screen. Upon reaching the golf ball, or just before, a search button needs to be pushed on the watch. Once pressing the search button, the Ranger Golf Watch will sync up with the iPhone and then those three distances are presented. It’s not the smoothest process compared to other options, but it does the trick. Keep in mind that since the watch receives its distances from the iPhone location services, the iPhone needs to stay close to the player at all times throughout the round. Leaving the phone in the cart while a riding partner drives to their ball, the distance shown on the watch will be from the cart’s location and not the present location of the golfer. 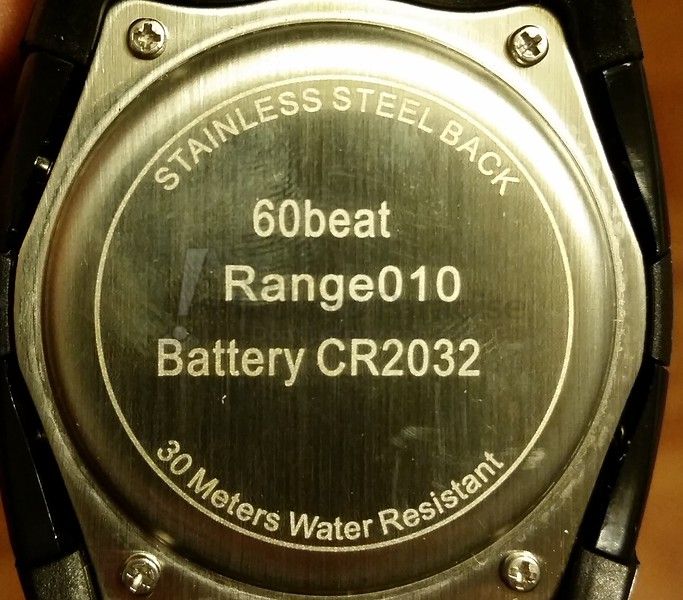 As previously mentioned, the Ranger GPS watch does not have a rechargeable battery, instead it’s powered by a normal watch battery. It does this because the watch itself does not house the GPS sensor. Instead it acts more like a second screen to display the yardages one would find on their phone. The concern that comes with that is the ramifications that the watch, and app, will have on the battery of the iPhone. After using this watch for several rounds, the battery drain most commonly seen was around 20% to 25%. Keep in mind that there are other outside factors that come in to play for cell phone battery drain, which most people are aware of. 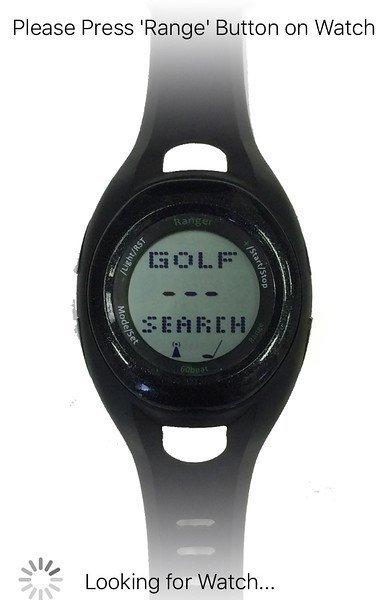 Unfortunately, this product did seem to have some growing pains. The process to get the yardages to appear on the watch screen was, as noted earlier, not the smoothest process. Once a player is ready to retrieve the distance for the next shot, one must press the search button on the watch. The down side of this was not the act of having to push the button, it was the delay that followed. After the button is pushed, the watch screen reads “golf search,” thus letting the golfer know that the yardages are about to appear. The time frame before those distances arrive is not uniform and at times lengthy delays were found. On more than several occasions, the dreaded phrase “not found” was the end result. When distances did appear, they often differed from what appeared on other GPS units by a good margin, with some readouts off by as many as 15 yards. These discrepancies were not tied directly to one specific course as testing took place on multiple courses. 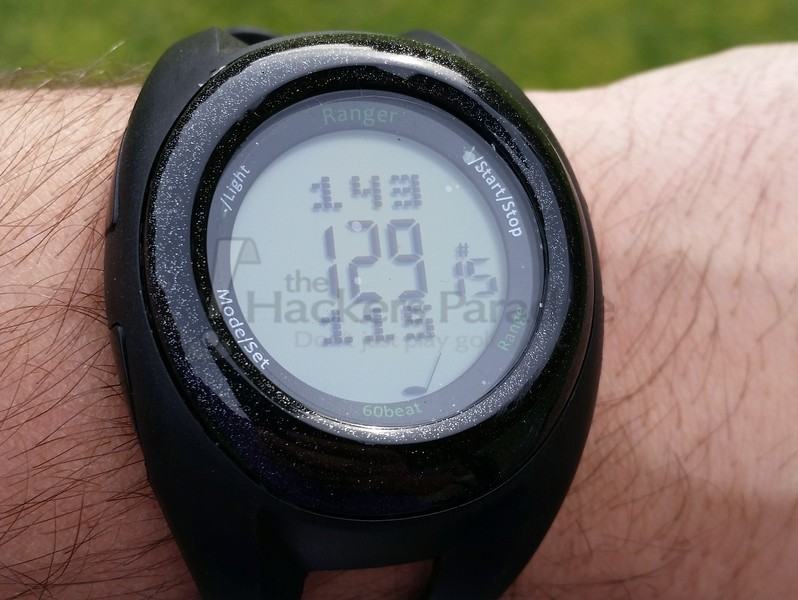 60Beat has put out a product here that has some real positive aspects to it. The biggest positive is that it runs off of a regular watch battery. It’s something that an iPhone user could leave in the golf bag and not worry about if the battery is charged or not. However, along with the positives come some negatives that could be tough to over-look for many. The delay in getting yardages can become frustrating, and even more so when the yardages a player receives is inconsistent. The Ranger Golf GPS Watch can be purchased at www.60beat.com for the budget friendly price of 59.99.