Since the introduction of the Club Glider line, Sun Mountain has been widely considered the preferred bag of amateurs and professionals who travel with their clubs. Since its inception, the company has continued to expand the Club Glider lineup each year to encompass a wide range of sizes and builds. 2014 is no different, as they are now bringing their newest, the “Tour Series” Club Glider travel bag into the fold.

THP received the black and white color variation of Sun Mountain’s Tour Series bag to be put to use in actual travel for the purpose of review.

New for 2014, the ClubGlider Tour Series was designed to coordinate with our new Tour Series Cart Bag and can hold a single cart or stand bag.

Right out of the box the Tour Series version of the Club Glider hits you with the look and the quality of the material which it is made from. The other versions of the Club Glider have been made either of polyester or nylon, but the Tour Series is an incredibly heavy duty vinyl material. The vinyl actually gives it the immediate look that it can take a beating and keep on going. Everything on the bag including all of the straps and handles also possess very heavy duty stitching that make it evident the bag is designed to last. 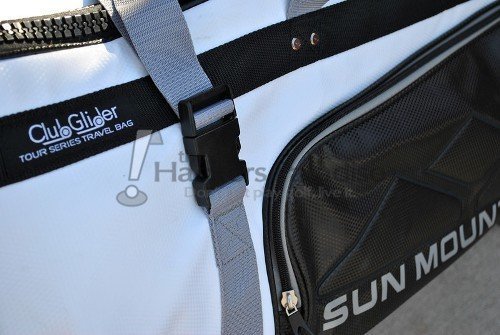 In addition to the look and durability of vinyl, the bag also features one of the largest main zippers on any travel bag, which eases concerns about possibly bursting during the duress of travel. With so much emphasis on the material and durability of the bag, one place that the Tour Series might seem a bit lacking to some is in extra storage, as the bag features only two exterior pockets, but the weight it saves (13.3 lbs compared to the pro at 15.5 lbs) could make a major difference in what is actually kept in the golf bag without worrying about weight limits. 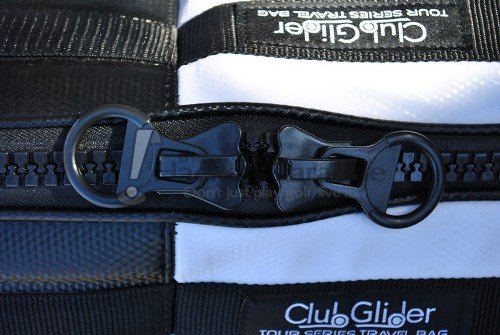 Specifically speaking, the Tour Series version of Sun Mountain’s Club Glider travel bags were designed for use with their new Tour Series cart bags, which are very similar size-wise to the mini staff bags we see put out by some manufacturers. With that in mind the Tour Series has more than enough room to fit a single stand bag and was indeed able to fit a mini staff bag as well. While many travel bags have a variety of extra pads and straps internally to wrap around the bags to secure them, the Tour Series is much simpler. The clubs simply slide into the travel bag and the user zips them in, as the actual design of the bag in the upper portion is built specifically to protect the heads of the clubs within. 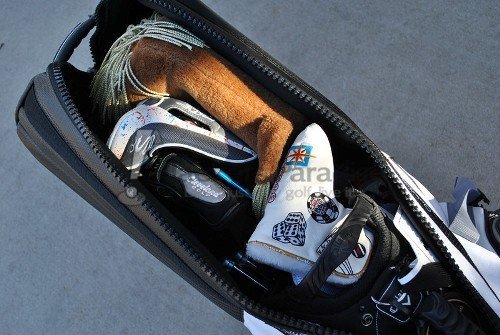 The other portion that has to be discussed from ease-of-use is the actual Club Glider mechanism and setup. The stand itself is spring loaded and the user simply pulls down on it to initiate the legs coming out. Material-wise the stand is incredibly well built with heavy duty wheels on both sets of casters, which allow for pivoting in all directions while also supporting the entire weight of the bag. Travel bags with two singular wheels at the base can be cumbersome to manipulate in and around airports, but the Club Glider made it incredibly easy allowing complete control and the ability to pivot around any turn. 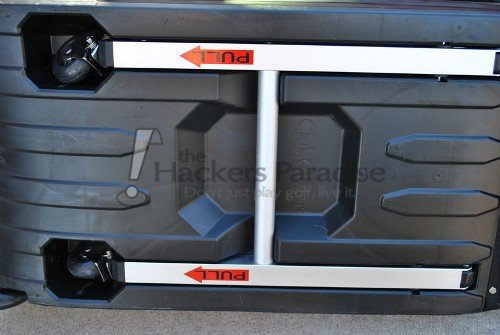 The surest way to test any type of travel bag is to hand it over to the airlines to do what they do best – put it through the wringer. The wear and tear that bags can undergo via airline travel runs the entire gambit from mundane to catastrophic. In a cross-country trek the Tour Series’ look of durability did not disappoint, as the bag held up and everything was just as it was when it was checked. Although there was some scratching on the lower plastic “sled” portion of the bag where the Club Glider is stored, it was nothing that wouldn’t be considered normal wear. Additionally, the white portion of the vinyl on the bag wiped down and cleaned up to look just like new. 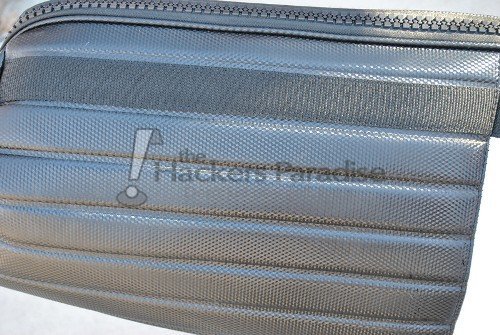 There are just some things where you get what you pay for, and at first glance the $319.00 MSRP of Sun Mountain’s new Tour Series Club Glider will without a doubt lead to mixed reactions. With that said, if you are a golfer who travels a lot with your clubs then the amount spent on those clubs is likely worth whatever it takes to keep them safe from destination to destination. Sun Mountain has improved upon a travel bag lineup that is a favorite amongst tour players by making it even more durable while still being the most easily maneuverable travel bag out there. For anyone considering the investment of a bag that will protect some of their most prized possessions, the new Tour Series should certainly be high up on their list to check out.

For more information on the Sun Mountain “Tour Series” club Glider travel bag, be sure to go to their website at www.sunmountain.com.