A few months back The Hackers Paradise had the opportunity to review the latest driver from Taylormade Golf. The R9 Driver hit the market with a bang and since then has been put into golf bags across every major tour and golfers all around the world. What set the R9 apart from the rest of the golf marketplace was its Flight Control Technology (FCT). FCT gives the golfer the power to easily change the club’s face angle, loft and lie angle simply by loosening a bolt in the sole, rotating the shaft into the designated position, then tightening the bolt. Does it work? It certainly did for THP and the testers that tried the club out a few months back. When The Hackers Paradise learned that Taylormade was releasing a new version of the R9, we must admit we were a little skeptical.

The R9 460 looks strikingly similar in pictures that were sent to us to the original R9 Driver. When one arrived at our offices a few weeks back it took putting them side by side to notice a difference for us. Compared to the R9 driver, the R9 460 driver has a larger head, deeper clubface, and lower and deeper-back center of gravity (CG), qualities that deliver a higher MOI for greater forgiveness and a higher spin-rate, helping low-spin players keep the ball in the air longer for increased carry and distance. Another major difference is the lack of Movable Weight Technology (MWT) that was found in the original driver. It gives players more ability to customize the ball flight and my initial reaction was that I was going to miss this quite a bit.

Once we had the new driver in our hands it was off to the driving range and we were able to get 4 other golfers that play the original R9 to come with us to do some comparisons. Once you pick the club up and swing it you notice there are differences between the two. The R9 460 feels a little more “head heavy” which at first I thought would be a problem but once hitting it I realized just how much it helped propel the club head through the ball for my swing. On the range we found ourselves hitting ball after ball and alternating between drivers and we all had similar thoughts. The 460 gets the ball up faster and we all experienced a slight distance gain with it. We also all noticed that mishits were having much less impact compared to the R9. However a teaching professional out there with us still preferred his original R9 due to the overall smaller headed look. Something that did not affect me or the other 3 golfers that were there. Two of the players did say that they would miss the MWT if they made a switch, as they like to tinker with them slightly.

I decided to put this driver in my bag for 4 rounds and see how it handled real course situations. On the course for the first round with it, I felt like the club and I were on our honeymoon. I hit 14 out of 14 fairways and thought I found a secret weapon in this new driver. The Aldila RE*AX 60-gram tip-soft shaft really fits my swing exceptionally well. Over the next three rounds I did miss fairways of course, but I found myself hitting more than usual and certainly more than I was with the original R9. I really enjoyed the R9, but the R9 460 fit my swing and my game so much better. The more I used the driver the less I even remembered about losing the MWT in the back of the club.

Obviously the Taylormade R9 460 was working well for me, but what about the rest of the public out there. Here at The Hackers Paradise we like to give hands on experience in our reviews from a lot more than one person. So we took the club to a crowded range and got 18 people to participate in a driver challenge so to speak. All 18 people hit their current driver and then the R9 460 a few times. They were then allowed to adjust the R9 460 to suit their game. Out of the 18 players 17 of them preferred the new Taylormade driver to their current one. Ironically, the only golfer that preferred his current driver to the new club played the original R9. His reasoning was more compact head and he felt greater distance was achieved. Most of the golfers really liked the ball flight and forgiveness of the R9 460 when they put it to the test.

Not everything was perfect in testing the new driver though. I had two issues that are still bothering me with the last few Taylormade releases. The first is the headcovers that are coming out on their new drivers. I will say this again, for a company that has to be one of the most creative in the golf equipment world, their headcovers are boring and drab. Keep in mind that this is a very small issue that can be corrected by putting a fun headcover on your driver like the ones from Daphne’s. The 2nd issue was the stock grip that came on the driver. It should not be called a “grip” for anybody that is in a humid area. But again, that is a simple $5 fix that I believe most of us do from the get go with a new driver anyway. Neither of these are deal breakers for me at all.

The R9 460 driver is long in length â€“ 45.75″ â€“ and equipped with an Aldila RE*AX 60-gram tip-soft shaft, available in L, M, R, S and X flexes. The characteristics of the shaft and the club’s added length together promote increased clubhead speed and distance. Normally I struggle with longer shafts in the driver, however in both this driver and the 2009 Taylormade Burner driver that we reviewed, I have had zero issues. Like I mentioned earlier in this review, it was as if this shaft is married to my swing. However for the first time in a while, it was as if this shaft was married to most of the players’ swings that tested this club.

Overall I think Taylormade Golf has a good thing going with the R9 driver line. The first driver set the tone with complete customization and this 2nd version gives some of that great customizing features and adds a little more forgiveness for us amateurs. In our testing it seems as the handicaps go up, so does the fondness for the added forgiveness in the 460 club head version of this driver. With a price tag of $299 ($100 less than the R9) we strongly recommend adding this one to your short list of drivers this year. If they were the same price, I would still prefer the R9 460 over the R9, however with the 460 being cheaper I am completely sold. For more information on anything from Taylormade check out their website at www.taylormadegolf.com. 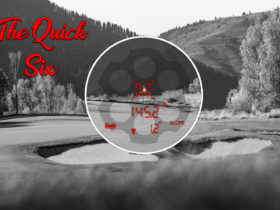