Like it or not, golf companies tend to get recognized for one specific set of products, and with Wilson Staff, it usually starts with their irons. Their irons have been in the bag for more major victories than any other company out there. Building upon the success they have had with their recent iron offerings, Wilson has decided to move some of their iron technology over to their recently announced C300 metal woods. 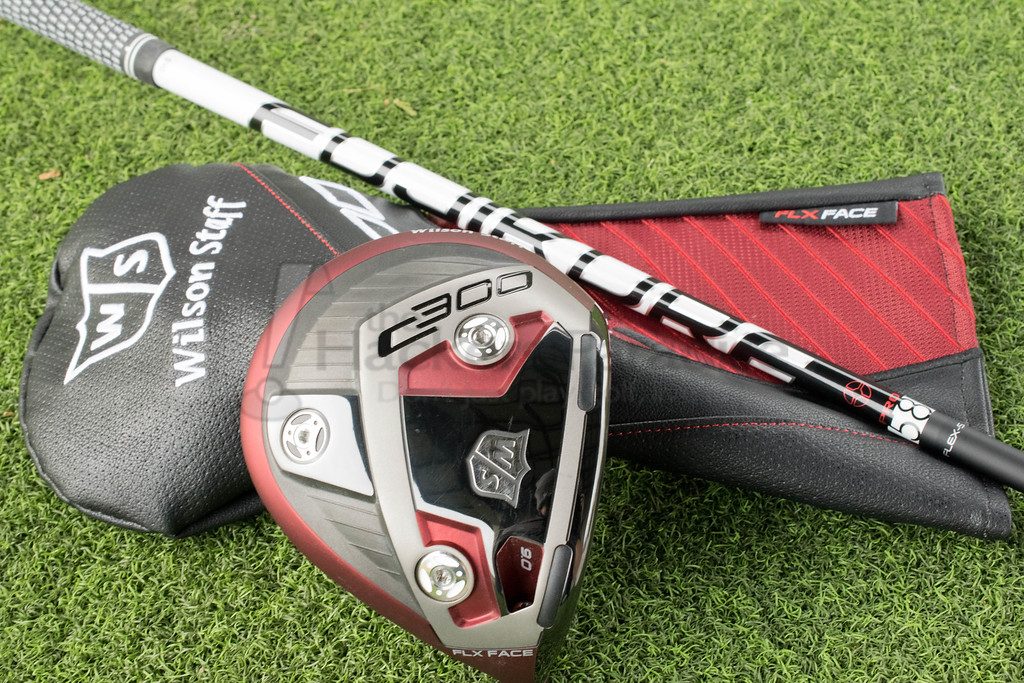 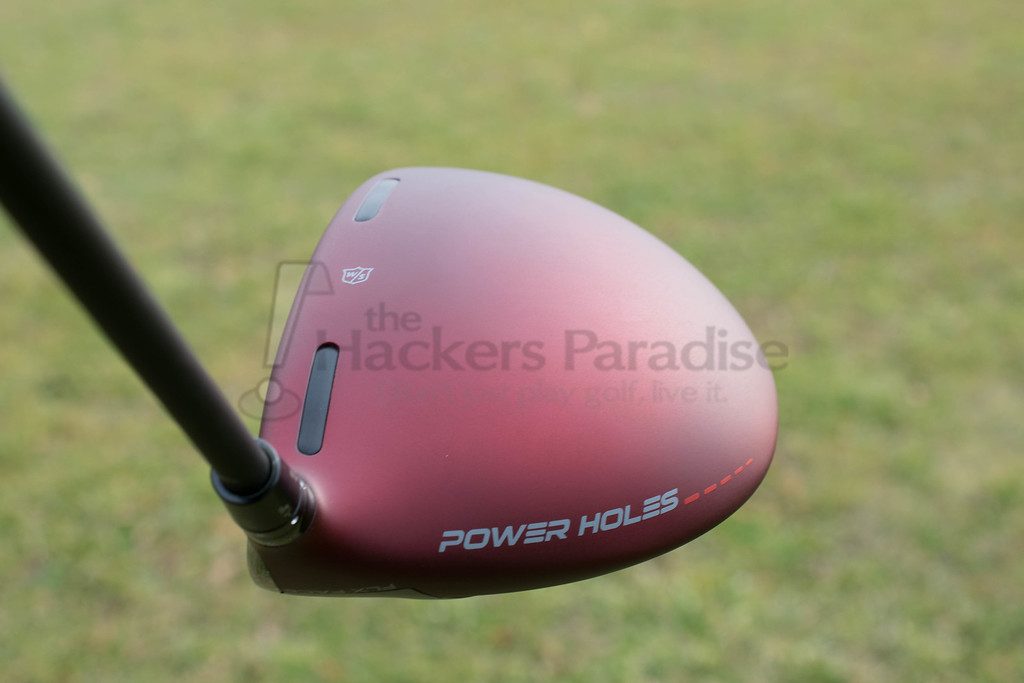 Two years ago when the C200 irons were released, they carried with them some breakthrough technology known as Power Hole Technology. These through-holes acted as a way to help detach a significant portion of the face from the iron body. In the year following that release, power holes were introduced to the D300 irons, and now for the first time they make an appearance in the C300 metal wood lineup, including the C300 driver.  On the previous iron designs, Power Hole Technology appeared a bit more aggressive as there were nine different through-holes, whereas on the C300 driver the number is shaved down to just four. Of the four, two are visible at address on the crown with the other two being on the sole. This piece of technology is going to help the body of the driver absorb the impact, while delivering more rebound effect, which in turn will help enhance ball speeds across the face.

Having the ability to help fine tune one’s ball flight and shot shape can be done by the inclusion of both Fast Fit Technology and Multi-Fit Sole Weight Adjustability. Starting with the adjustable hosel where there are six different loft alterations. Players will be able to adjust down as much as one degree, while being able to loft up to two degrees. Hidden within the adapter is the Fast Fit Technology, which presents a green line just about in the middle of the adapter. When looking to make a loft adjustment, instead of taking the entire adapter out of the hosel, it only needs to be loosened just enough to see this green line. Once the green line is visible, the shaft can rotate to the preferred setting, and then locked back in to position. It might not be the most notable piece of technology that is pumped into the C300, but it is a pretty cool feature, which works rather well. 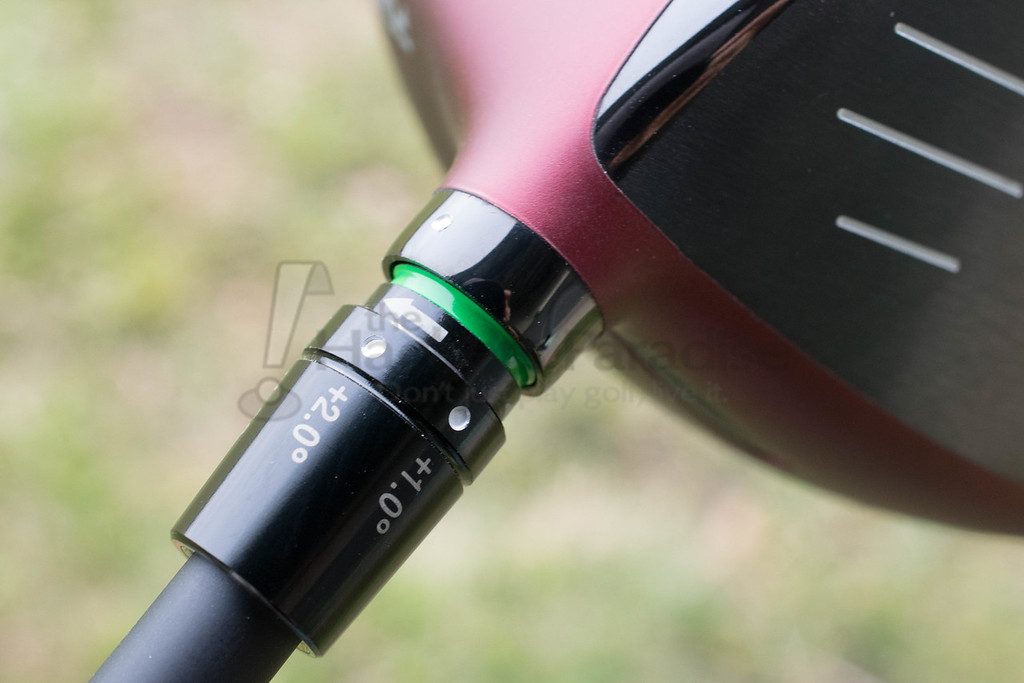 On the sole there are three separate weight ports that will give one final way to help tweak the user experience. Included with the driver are two 6-gram weights, and one 2-gram weight. It might be self-explanatory, but to configure the driver in a draw setting, move the two heaviest weights to the heel and center weight port, with the opposite being true for a fade biased arrangement. For anyone who purchased a Triton driver last year, which came with some extra weights, know that those weights were compatible with the ports on the C300.

Behind the ball the C300 driver has a lot of things to like, starting with the finish, which is a deep matte red. Store shelves have seen some red driver heads in the past, but this version could be considered amongst the very best. Not to be overlooked, the choice of this crown color really makes the power holes easily visible, whereas going with a more traditional black crown would have caused this visible technology, to be a bit less evident. Besides, the visual presence of the power holes on the crown provides a nice bit of alignment help, as a golf ball seems to fit perfectly between the two. 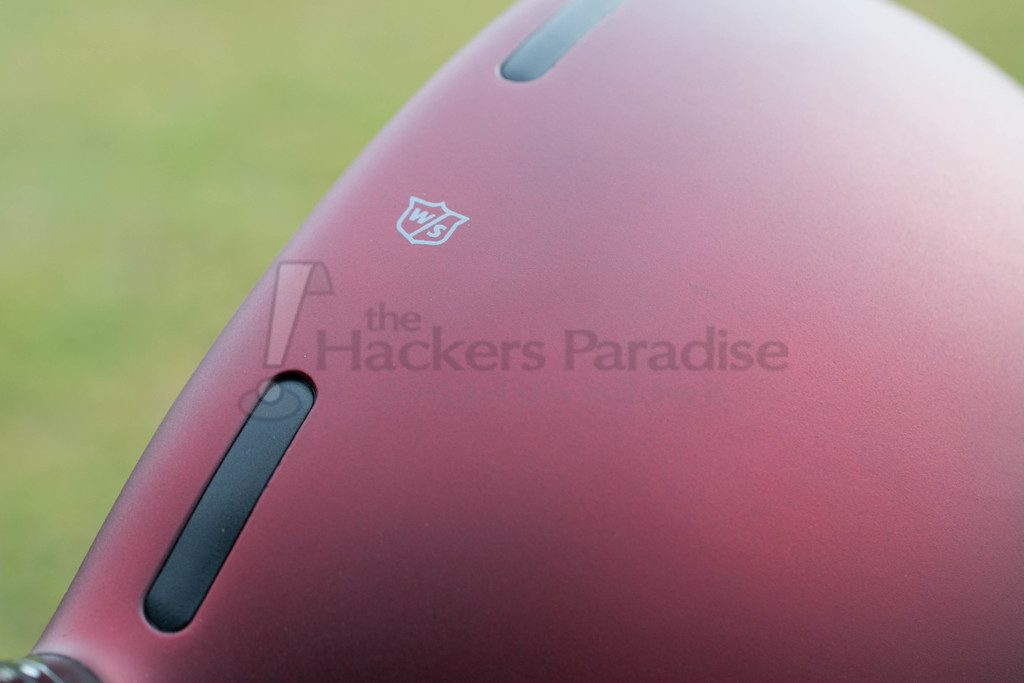 Being for the “crossover” player, head shape is something that shouldn’t be taken lightly. Whereas the D series drivers feature a bit of a larger footprint, and a figure that is geared to raise the MOI (moment of inertia), the crossover golfer is looking for something a bit different. What Wilson has done with the C300 is provide a look that can appeal to the lower handicap player, with a more compact head from front to back, and face that has a generous amount of horizontal real estate. 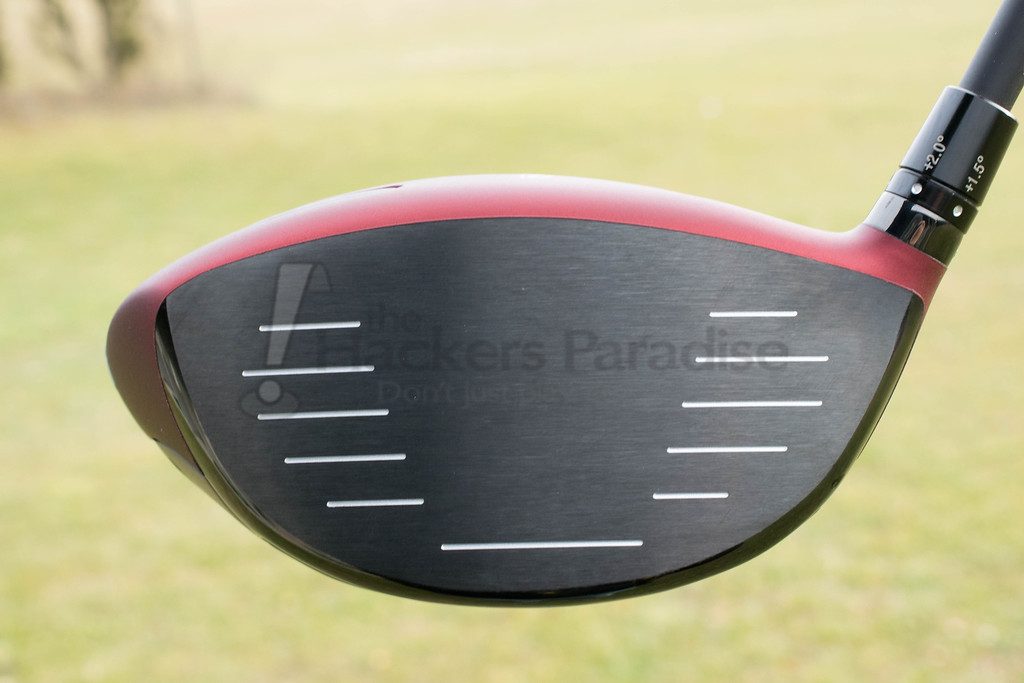 Shape wise, the C300 looks the part of a stronger player’s driver, and when it comes to the spin rate, it plays the part as well. Unfortunately, there are plenty of products out there that have these two characteristics, but yet they might come up a bit short in terms of forgiveness. This is where the inclusion of the power holes really seemed to aid this club. While the pure ball speed numbers did not jump off the page, the consistency in those speeds on contact made away from the center of the face, was rather impressive. Low contact, as well as toe side, provided much better ball speed retention than what was seen with last year’s Driver vs Driver winner. With the low spin nature, and the strong ball speed retention, players who either carry a high swing speed, or produce excessive spin, will find some nice distances with the ability to freely swing away. 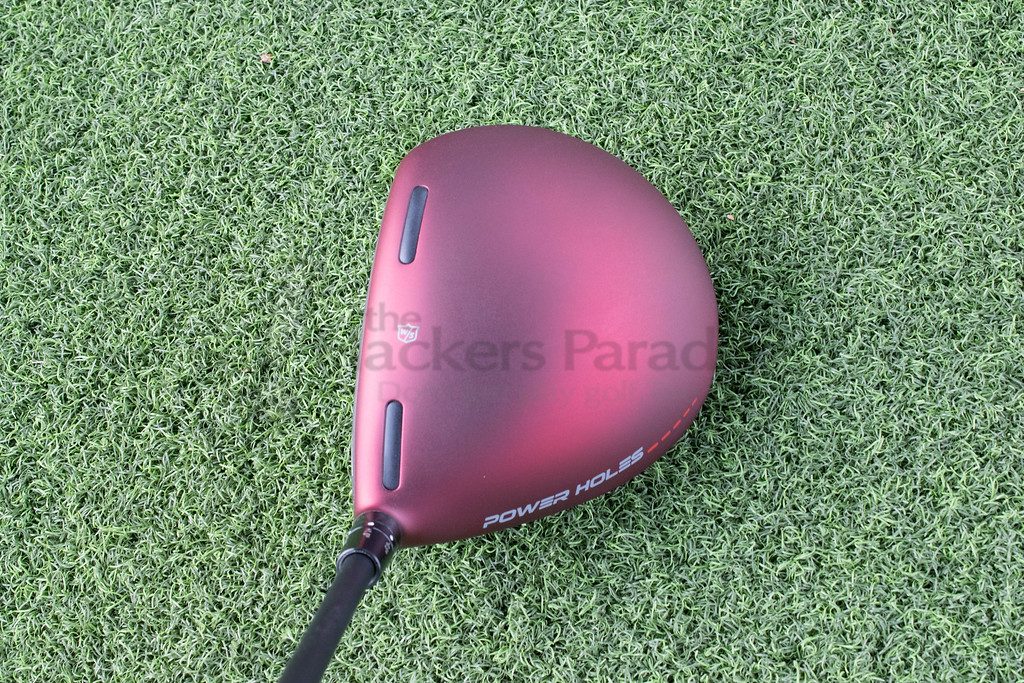 In recent history, Wilson has seemed to fall behind a bit when it comes to the sound their drivers have produced. With this line, consumers who were bothered by some of the past releases will be delighted by what they find when giving the C300 a shot. Audibly, it is still on the louder side, but what is produced is nowhere near as hollow sounding as some of their past offerings. In fact, hearing the differences makes one think that Wilson is paying attention to this characteristic, which is really nice to see because sound can be either a positive trait, or something that detracts from the actual performance of the club. In this case, it complements the performance that is seen from the C300.

Wilson decided to go with a Fujikura Speeder Pro 58 shaft as the stock offering for the C300. Being that the matte red finish makes the power holes stand out, the addition of a simple black Speeder Pro tenders a nice uniform look. Combining with a driver head that is such low spin, this Fujikura Speeder Pro certainly appeared to help with launch. Through testing however, the combination of this stock setup produced less ball speed and distance versus pairing the C300 with the Aldila Rogue that came stock in last year’s Triton driver. After spending time with both combinations, both setups proved that even for someone who tends to hit a high ball, more loft was certainly welcomed. As with any driver, or club for that matter, the emphasis on fitting should not be ignored. Wilson Staff had a generous catalog of driver shafts last year, and that will most likely be the case once again. 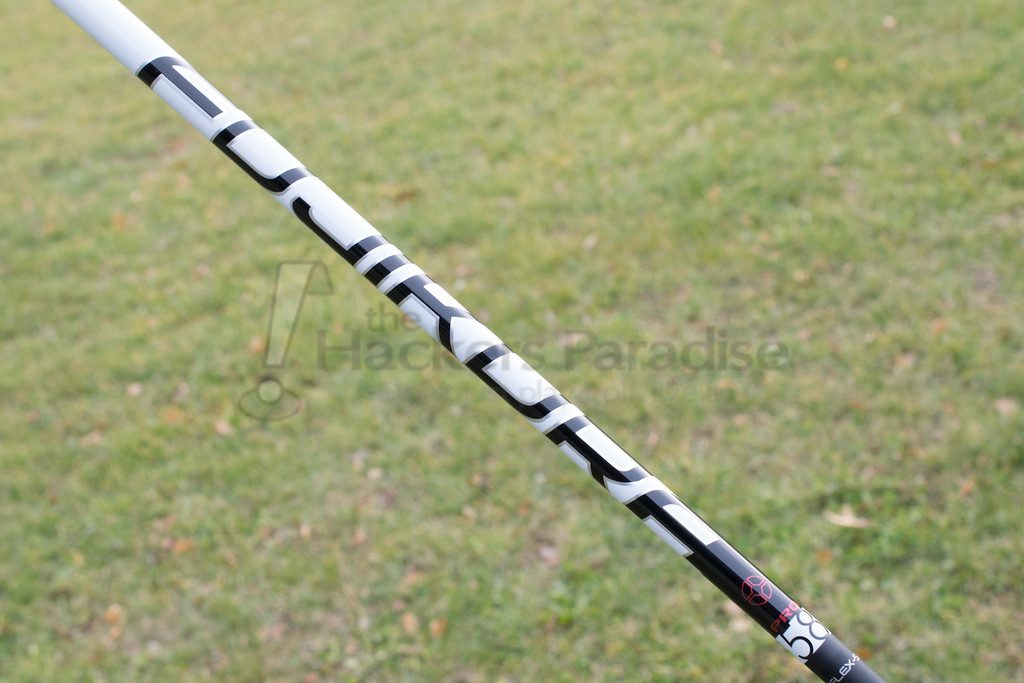 Having a driver aimed at that “crossover” type player is a bit of a new journey for Wilson Staff. Just like with the release of the C200 irons, this driver should draw some attention for the inclusion of the power holes. Once players put it to the test, it will be easy to see that there is a lot to like with this product. Golfers who are in the market for a driver that yields low spin, without leaving a lot of forgiveness on the table, will probably enjoy what the C300 has to offer. Priced at $399, the C300 driver will hit the store shelves in January 2018. More information on all of the C300 lineup can be found at www.wilson.com.