With a variety of style profiles, colors, and spike options, Callaway has produced a strong selection of golf shoes for the everyday golfer in 2018.  From casual to traditional, and sporty to camo, they have really revitalized their products and welcomed strong variation in a large range of prices.  For this review, the La Grange golf shoes were provided in the white/black colorway. 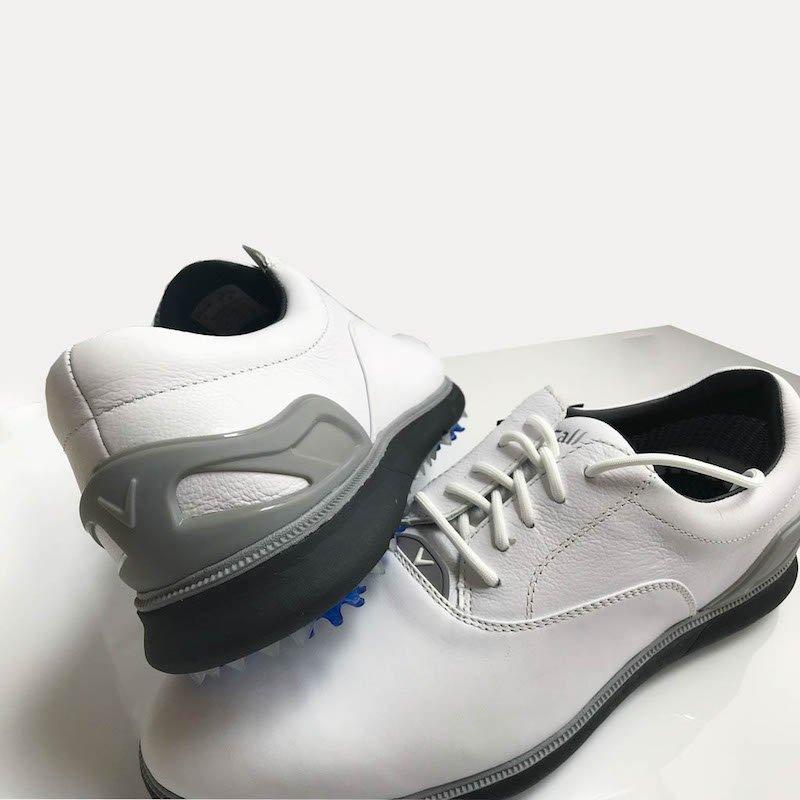 There are a great deal of features that go into the La Grange shoe by Callaway, listed on their site are the following highlights;

The first takeaway as the shoes were drawn from the box was the traditional profile.  Obvious stability features built into the heel portion of the shoe, but for the most part, white uppers with limited stitching on the front side of the shoe really welcomes that style that has long stood the test of time.  It is complimented by a relatively neutral black base (unlike the other three colorways), and only stitching breaking up the rest of the white boot.  The tonal profile is broken up by half of the sole presented in bright blue, only visible during movement. 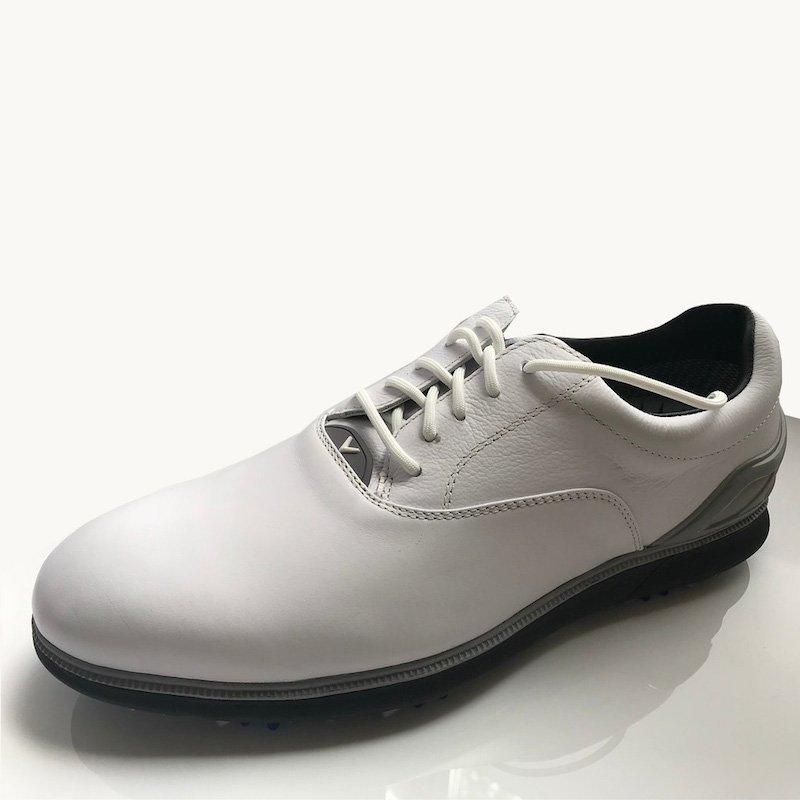 With most structured spiked shoes, the first thing I look for is stability and control in any condition, and the La Grange withstood that test in every way.  There is an absolute control that spiked shoes provide golfers that can be overlooked for comfort in spikeless, but becomes instantly remembered as the first few swings grab the ground aggressively and force the momentum of the twist to work harder before uprooting the grass and ground under the shoe.  At no point during the numerous outings with the La Grange shoes did slipping occur, and if anything, provided a very noticeable grab on the ground in both firm and soft conditions.  While I am not the most aggressive foot twister or loose swinger of the golf club, there are many opportunities where spikeless simply cannot grab the way spiked shoes (and in this case the La Grange) can. 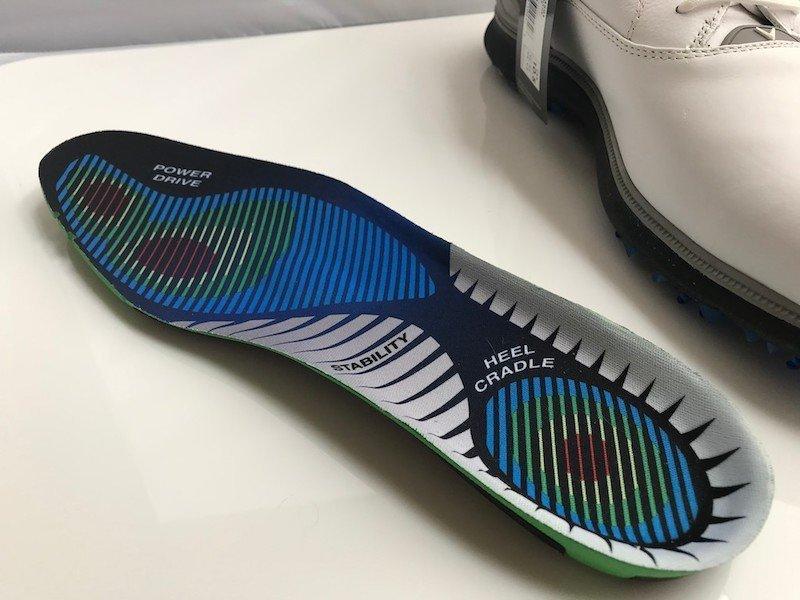 It seemed like the La Grange shoes were actually quite generous in the mid-section and toe box, not really suffocating the foot the way some structured shoes would.  During the early stages where the foot was warming up to the boot, it became the most comfortable part of the shoe and allowed for enough movement to not stifle the foot and force that cramping, uncomfortable break-in feel that shoes tend to have.  I am inclined to also highlight the insert which cups the heel and shapes the foot into the shoe very well, isolating the right areas for stability while letting the rest of the foot move in comfortable ways.  It probably helps that the shoe has five flex points on the sole, along with a flex point that runs along the middle of the shoe to create maximum movement while stepping.  This is a great feature for golfers who want the shoe to have a bit of give while walking and during the swing, instead of forcing the foot to maintain a shape. 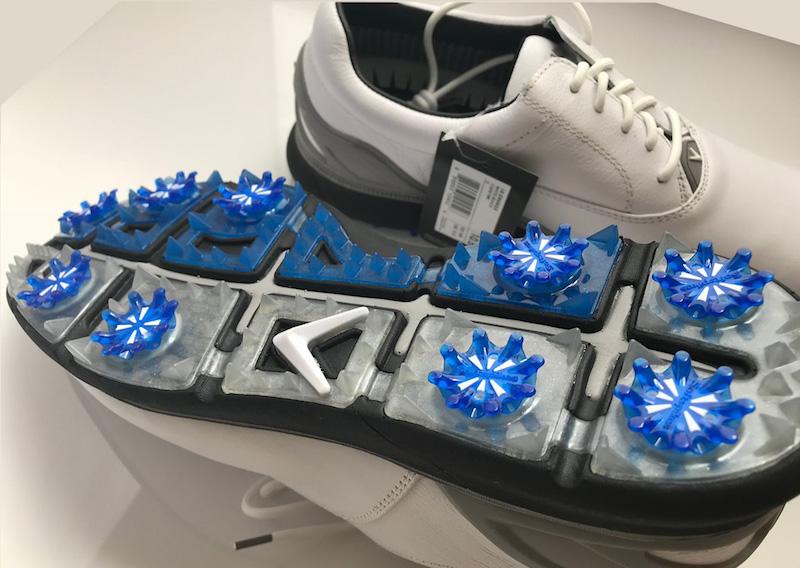 If there was a complaint to be made about the La Grange shoes, it may have to be in the heel section.  While this kind of feature would be slowly adjusted to by the foot, blisters did occur higher on the heel due to the leather wrapping that surrounds the entry point of the shoe.  Between the seemingly resilient material that makes up the lower heel section, and the leather wrap that sort of pipes around the upper heel, it just seemed to grab aggressively on the heel while wearing performance compression socks.  As noted, it does not seem likely that this kind of feature would be a long standing problem, but it would benefit golfers to ride or take the La Grange to the range a couple times before taking them out for a long nine walk.

There is a lot to be impressed with by the La Grange shoe by Callaway, starting with the subtle features and moving all the way into the obvious attention to detail that will allow the shoe to last a long time.  Offered in a variety of looks, with stability and performance enhancing features that lock the foot aggressively in place during a swing, yet allowing the foot reasonable room to move, makes the La Grange a fantastic option.  For more information, visit www.callawayapparel.com.  You can find these shoes at several online retailers such as Budget Golf.