Variety.  An open willingness to provide options for all golfers.  Familiarity.  The welcome return of what has worked well in the past.  Innovation.  The constant attempt to create the next best idea in putting.  It seems like these steps are at the core of the group at Odyssey Golf who have once again opened the idea bank and produced a very interesting putter in Red Ball.  A combination of visual alignment tools to make sure golfers are doing what they need to in order to make more putts.  THP had an opportunity to take an in depth look at the latest and greatest Odyssey putter to hit the market, and will provide some depth of detail in this review. 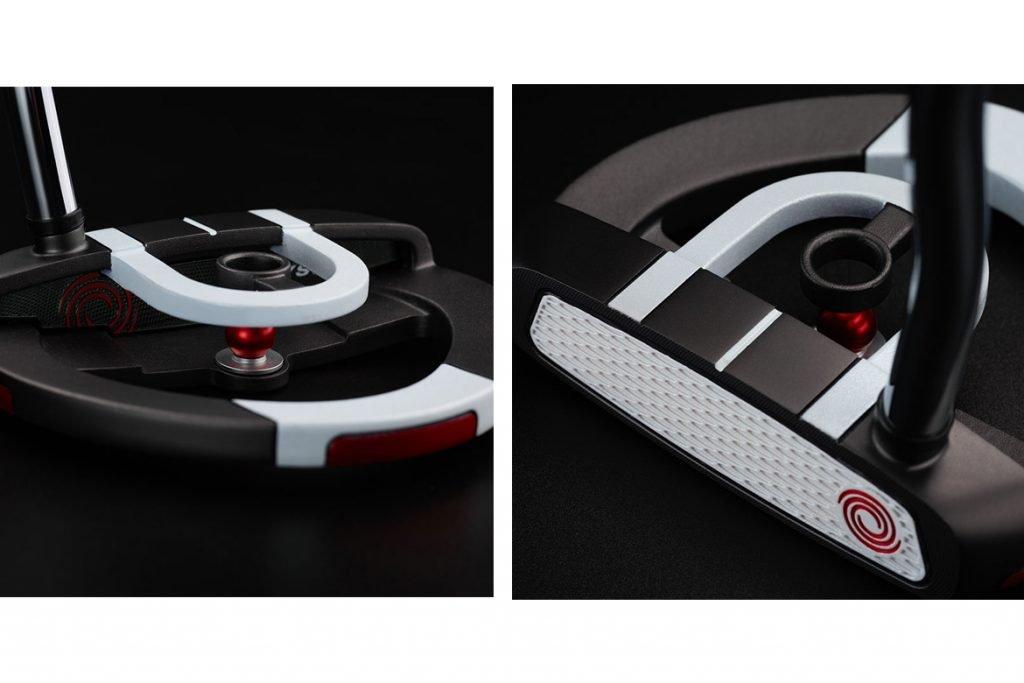 The first and most obvious element of this putter is the red ball that floats above the central bar that runs parallel to the face.  As the name of the putter is “red ball” it should be expected that this element would draw the most interest from those looking it over for the first time, but as will be discussed later in the review, it is the core element of a putter that supports the stroke in numerous ways.  The goal of the red ball is for the user to place it perfectly in the scope.  This effectively supports the proper lie and face angle of the putter, which could eliminate the ability for an effective putt before the stroke is even made.  During testing on the putting green, this ever present reminder of that alignment was a wonderful tool for both correction and validation.  With that said, once in tune with the setup, it became second nature.  There was another element that stole the spotlight. 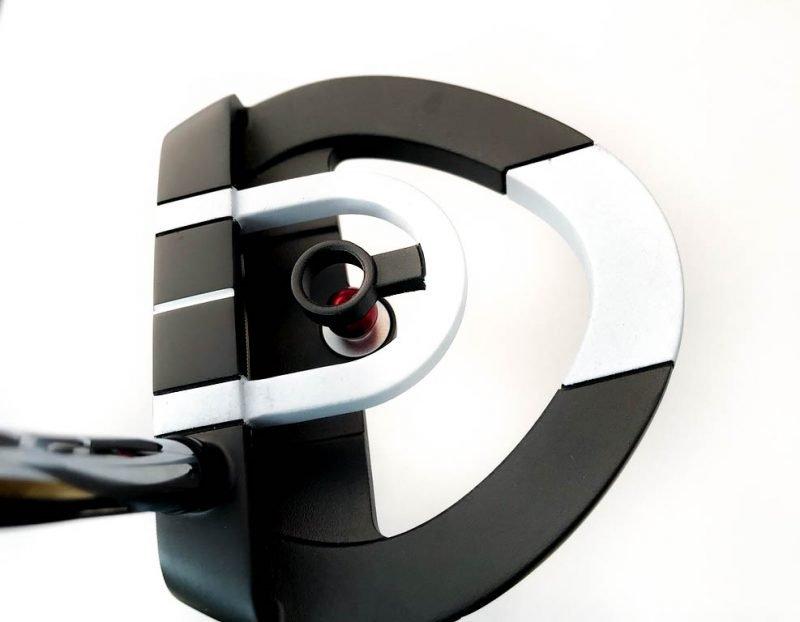 That element is the Versa profile.  On the central point of the crown is a singular line that supports proper positioning of the ball behind the head.  Moving outward from there, lines depart the top of the putter and merge in a backwards “C” shape, with an additional white angled shape on the perimeter bar that runs around the back of the head.  This combination of white visual aid may be one of the most effective and confidence boosting aspects of a mallet that I have ever come across.  It was so visually present in setup that I tended to nearly forget about the red ball alignment while going through the motions in rounds played.  Some may see this as a negative, but I think it speaks heavily towards the benefits of both elements.  It just shapes the ball so well behind the head. 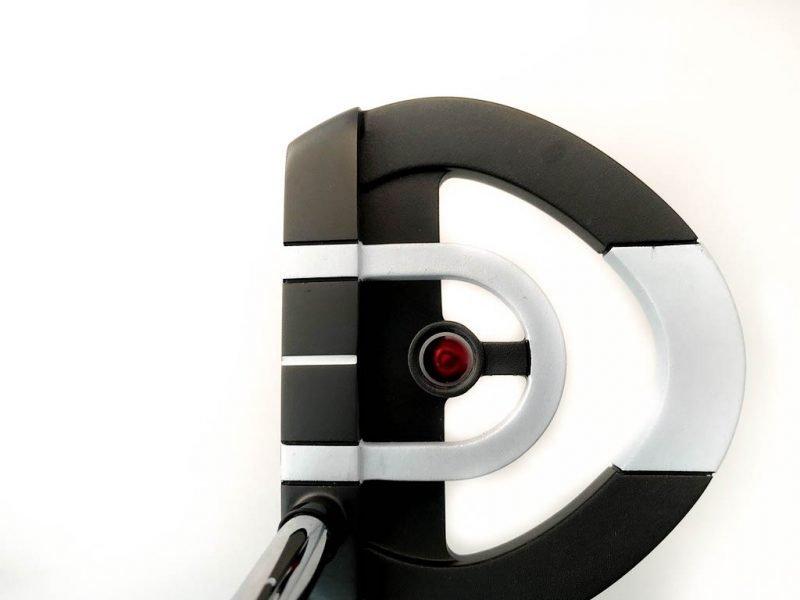 While I cannot speak highly enough of the alignment itself, one thing I still believe needs refinement is the execution of the white on black paint.  There is some blending errors that are visible in high resolution photos and close inspection of the head that sets the Red Ball apart from higher end model putters.  That said, it is not a visual hindrance at address, and takes very little effort to overlook.  Versa is a great concept and I am eager to see how Odyssey continues to refine the concept as technology continues to improve in the application process.

Odyssey decided to utilize the White Hot RX insert for the Red Ball, which is a very distinct experience versus other inserts and milled putters.  Where other putters can feel a bit hot, White Hot RX actually leans more on the subdued side of the spectrum.  Not a lot of audible response (which I believe a lot of golfers love), and it did seem like it took a bit more oomph to get the ball to the desired distance.  Certainly something that would be easy to get comfortable with over time, and gives the user the opportunity to have a bit more of an aggressive stroke which could continue to support the stroke quality. 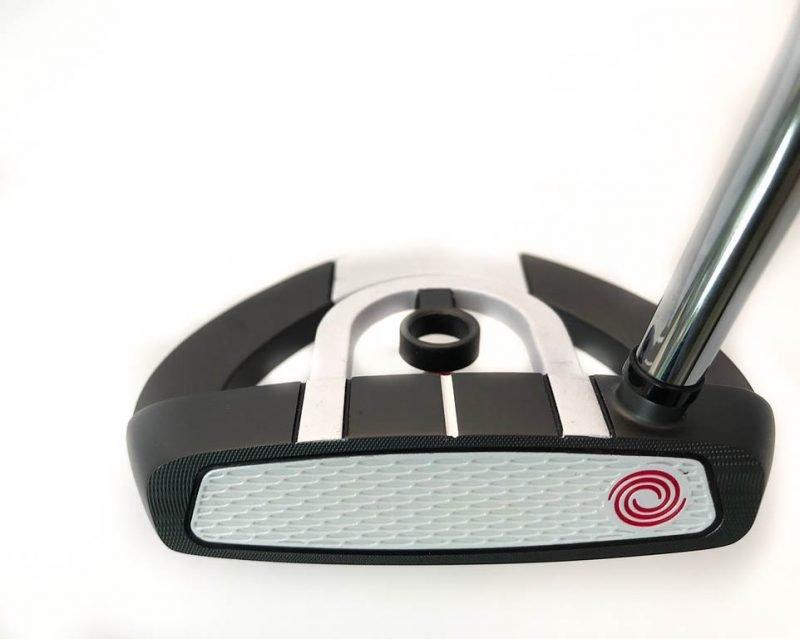 The criticisms of photos of the Red Ball on the THP forum were heavily focused on the ‘underwhelming’ sole visuals, but after reading the intentions of Odyssey it seems to make a lot of sense.  In their goal to boost the MOI of the head, they took all the unnecessary material out of the center of the head and moved it either to the face or the perimeter, which helped to improve the consistency of ball speed and adds directional control for golfers.  It is a nearly impossible design element to test against, however the mallet profile and the MOI quality was periodically confirmed with underwhelming strokes receiving a much better result than deserved. 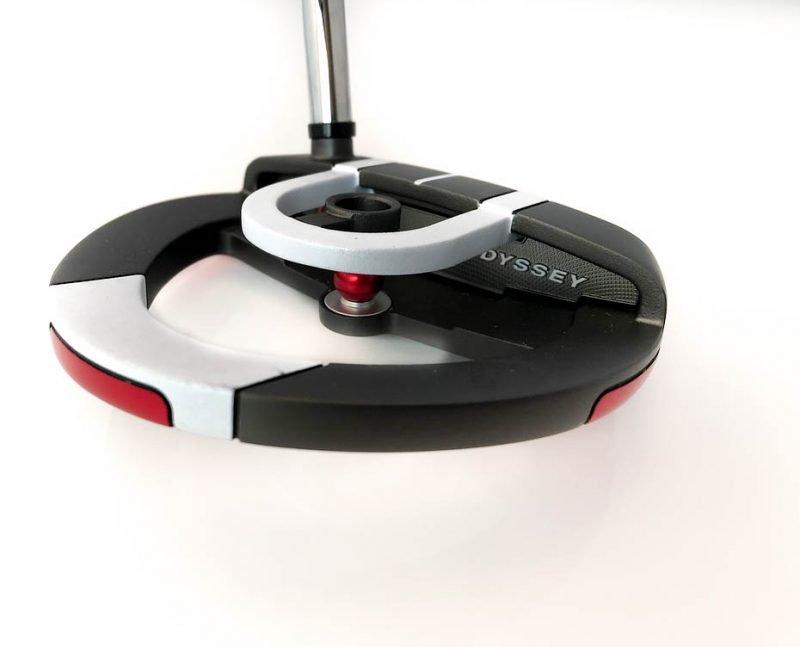 Using the Odyssey site to touch on their highlighted elements of Red Ball, I had a good chuckle when scrolling down to the “you may also like” section that showed four additional putters that tow the line of very functional and highly unique.  It is a great trait to be known for functional variety, and I think that is part of why we see so much Odyssey in bags both on tour and at local courses.  There really and truly is a head shape for just about every eye, and that is a great representation of what golfers can expect when they pursue a company like Odyssey to solve their putting needs.  For me, I found Red Ball to be an excellent addition to the lineup, and whether the red ball continues into the next couple years, I believe they have a winner in the Versa setup that was constructed for this head.  For more information on Odyssey Red Ball, visit www.OdysseyGolf.com.