If you are going to swing, swing for the fences.

With the new Stroke Lab Black series of putters, Odyssey is doing just that once again introducing two new shapes, the Bird of Prey and the Ten. THP was able to spend time with both putters to provide a complete run-down. Read on to find out more! 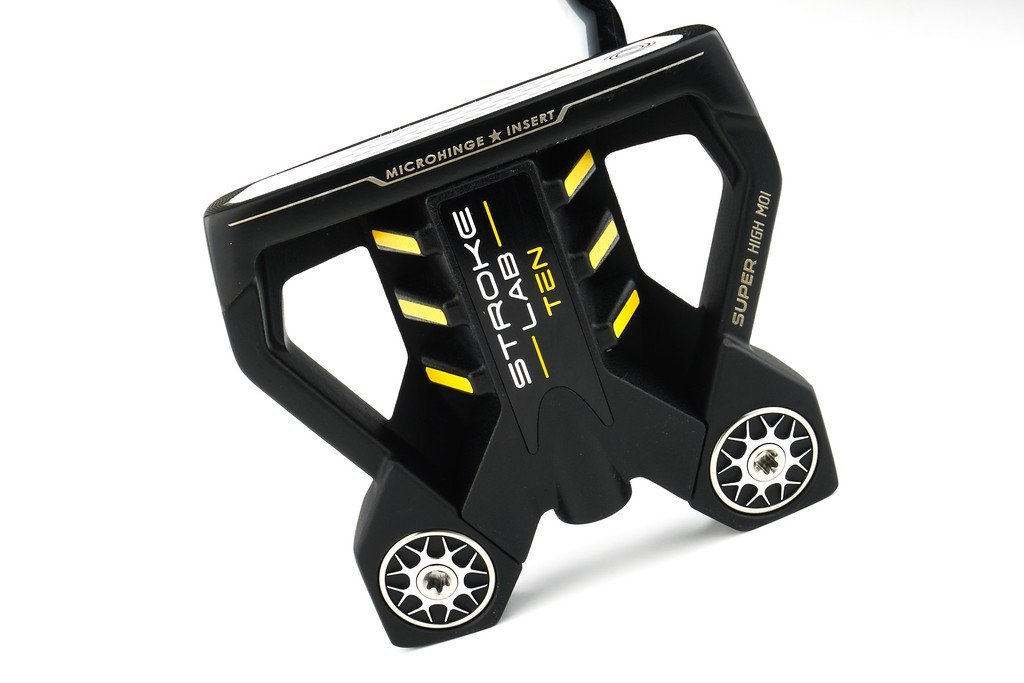 Love them or hate them, no one goes big like Odyssey does. Yes, one of these looks like a design another company hangs their hat on, but Sean Toulon was part of the creation of that and the Ten shape will be around for a long time now, so get used to it. However, the real star here might just be the Bird of Prey, honestly the easiest to align mallet I have ever reviewed. 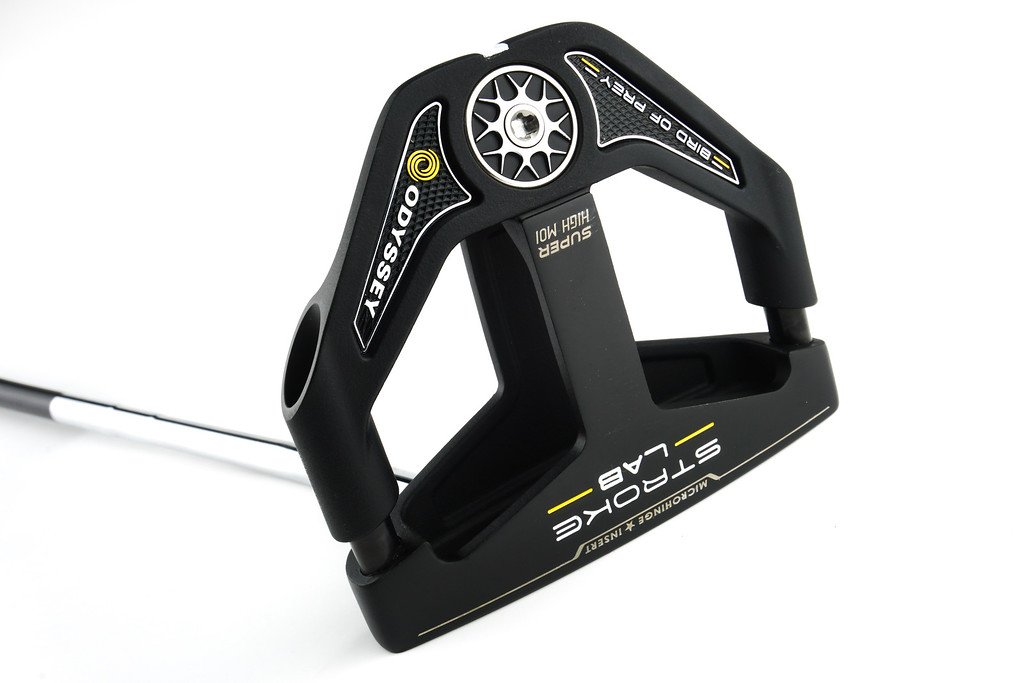 First and foremost, the release of these two putters marks an expansion of the insanely successful Stroke Lab lineup. Within the first 7 months of hitting the various tours, Odyssey had 777 in play, and it has only grown since then. Not only that, the Stroke Lab shaft design has been such a boon for the company and golfers who have given it an honest go, moving forward it will be the main shaft choices of putters across their lineups. One thing to note, the Ten and Bird of Prey putters I will cover in more detail in just a bit are part of the Stroke Lab Black series, the previous Stroke Lab Silver series will stay in line and isn’t going anywhere. 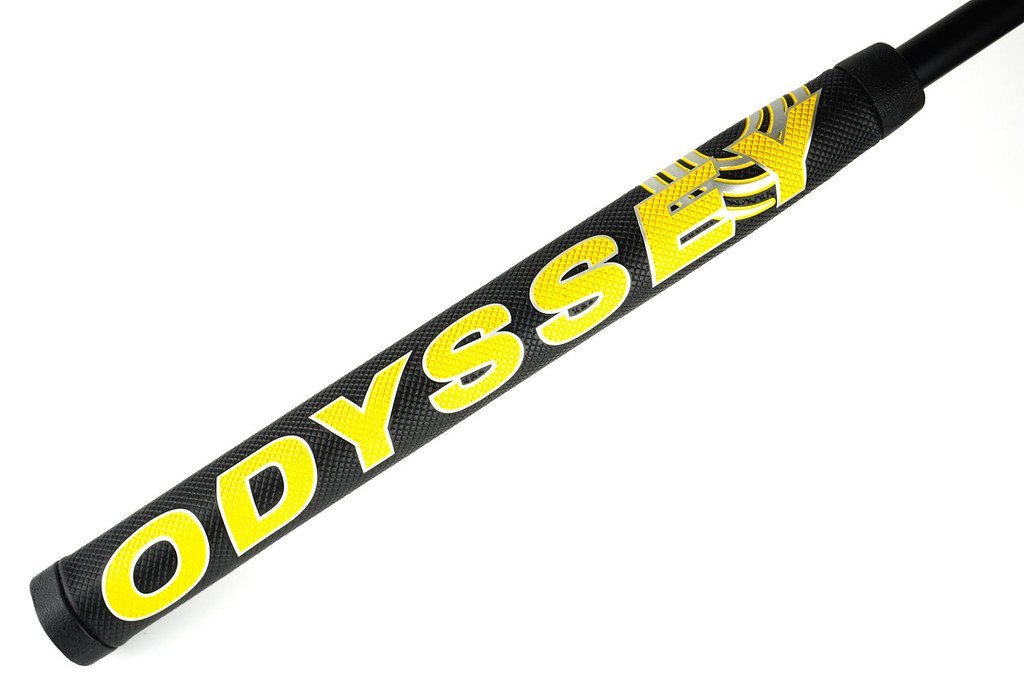 So, what is the difference in the two series of putters you may be asking? Primarily the insert. With the SL Black putters, Odyssey has created the “Microhinge Star” insert which based on Tour feedback is firmer than the White Hot Microhinge that is in the Silver series. The idea being that a little more firmness brings more feedback to the user. Based on my time with the Ten and Bird of Prey, as well as having reviewed the original SL putters, this is definitely true. At impact there is a higher pitch which leads to more audible feedback. Honestly, I think the user feedback from it will be hit and miss, so many are such huge fans of the White Hot versions of Odyssey’s inserts that this firmness may not be their cup of tea. That said though, the roll? Absolutely true. No matter your feel preference, there is no denying that no-one does inserts as well as Odyssey. 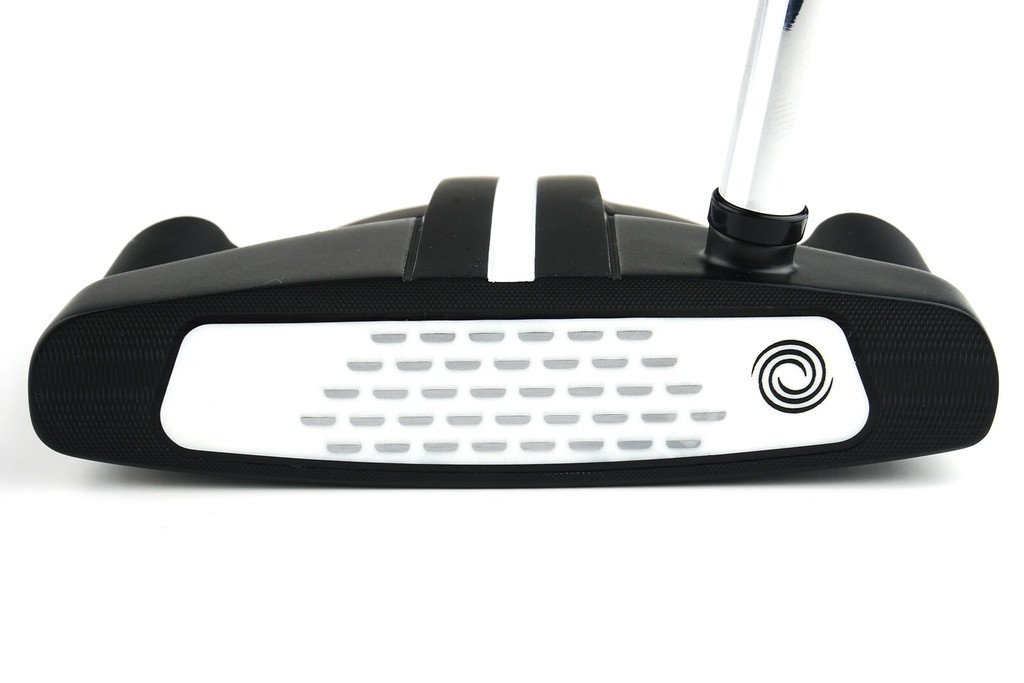 The rest of the package here with the SL Black series is the application of multiple materials to truly push the limits of MOI creation, as well as that Stroke Lab shaft itself. These two putters might be the cleanest use of multiple materials from Odyssey we have seen. The putters themselves utilize ABS (a thermoplastic) in the core of the shapes to allow more mass to the perimeters, thusly upping the MOI. The Stroke Lab shafts though, as most know by now, are also multi-material. The combination of steel and graphite allowed for 40g to be saved from the middle of the shaft and repositioned in the head and under the hands. For the 1,000th time, this is NOT the same as traditional counterbalancing as the overall putter weight stays in the standard 540-545g range. I have tried time and again to put the SL shaft into words, and I just can’t, its one of those things you have to go try, because it works. 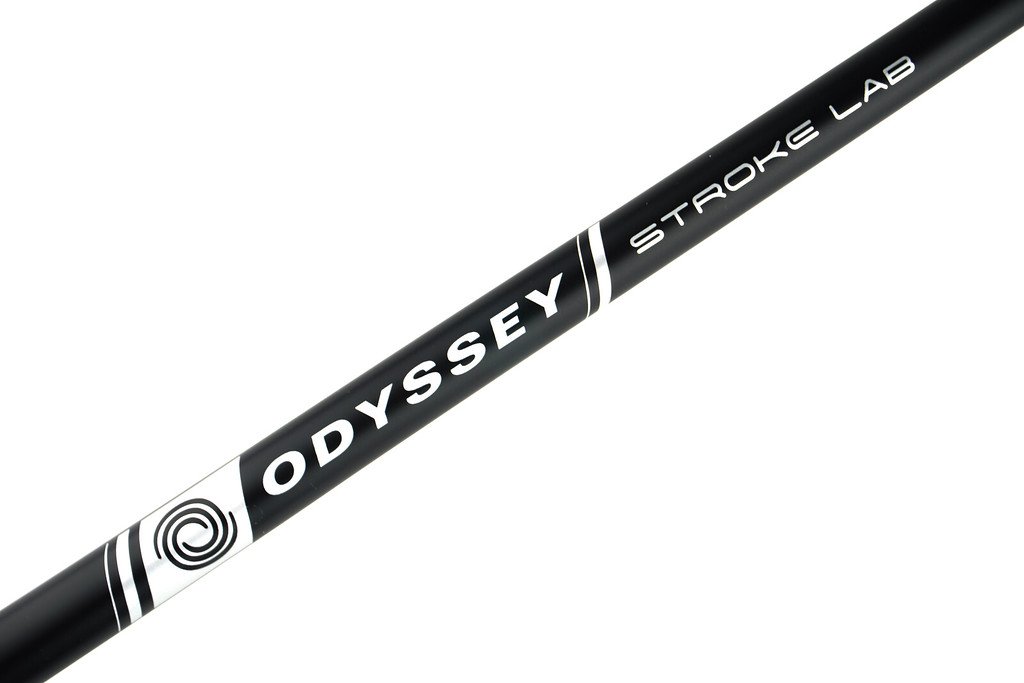 I want to talk about the Bird of Prey first, because I think it is being overlooked a bit in all of the discussions surrounding the Ten. This one is straight from the brain of Austie Rollinson of Odyssey who is a bona-fide legend in putter design, if you don’t know anything about him, you should put your Google-fu to use and do a little digging. All that said, this is a unique design for Odyssey, new and different, things that either go very well in the putter world…or not. 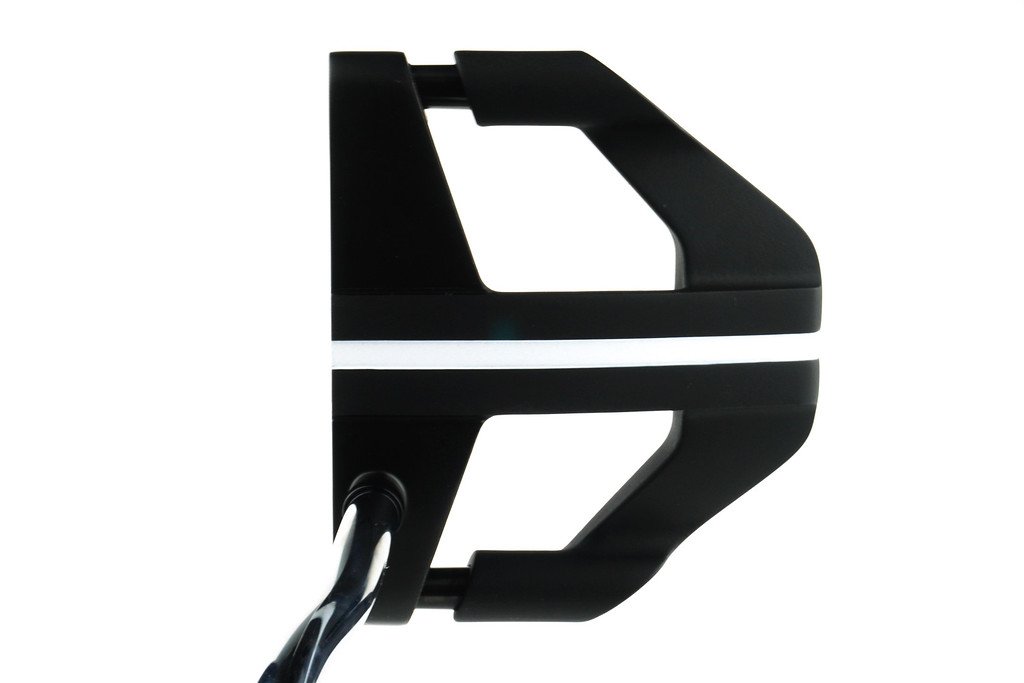 The Bird of Prey, while having one of the coolest names ever, utilizes multiple materials and shapes in order to create a MOI of 5,712. This is significant because first, that is a big number, and second the higher the MOI the more balanced and resistant to twisting the design. Breaking it down as basic as possible, it means that it’s a really forgiving putter designed to help you put the ball on a consistent line even when you miss-hit. When you look at the head from address you can see the different materials in play, the visual tech smacks you in the face and doesn’t let you look away. 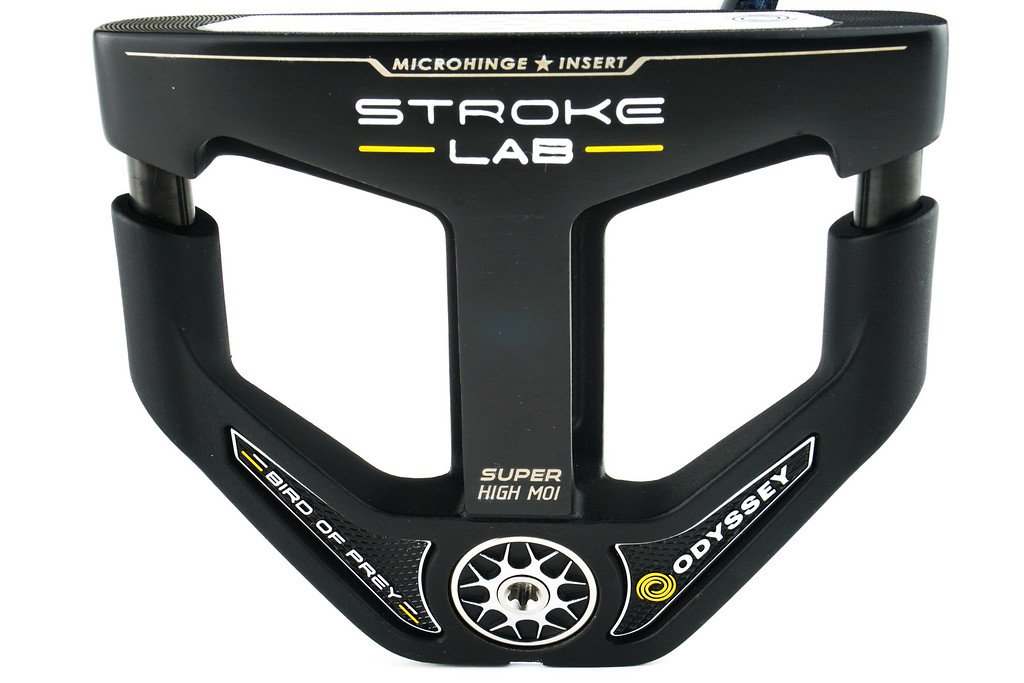 In terms of performance? I believe that the Bird of Prey is getting lost a bit in the shuffle because of the buzz around the Ten and that is a shame.  I say this because entering the review I myself wrote this one off because it was too abstract, not a shape I knew, and a list of all sorts of things that were cast to the wayside as soon as I put it into practice and play. This is a shape that just works if your eye lets you be comfortable looking down at a mallet. There is a combination of angles and lines that run parallel and perpendicular to the target that give confidence when placing the putter behind the ball. Also, the Marxman style “Hi-Def” alignment line makes life a breeze. In fact, the two most standout things for me beyond the roll was that the alignment section even outside of the site-line lends visually to setting up to hit your chosen line incredibly well, and also the putter soles itself square when put at address, no manipulation needed. 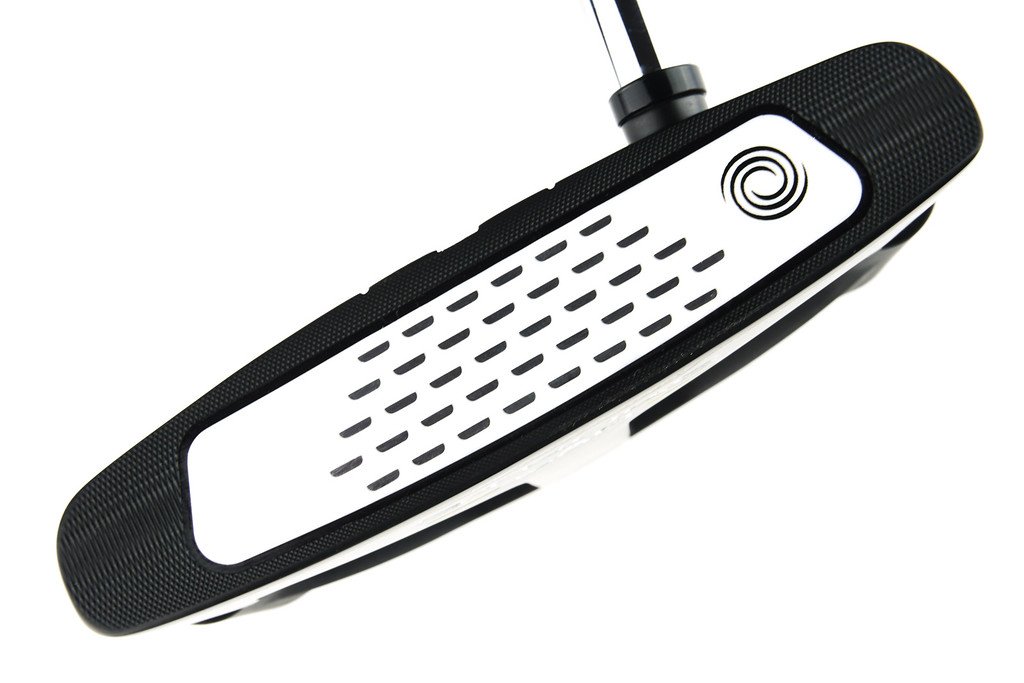 Bottom line here? I believe with time this shape is going to surprise people for the amount of play it will end up getting.  Plus, in-hand it really isn’t as large as you think. Austie and company did well with this one.

Shall we begin with the elephant, scratch that, the mammoth in the room first? Yes, it looks like a Spider. Shocking, I know. Now, as I tell you those that are hung up on that should look up who had a massive hand in designing that shape (*cough* Sean Toulon *cough*) before grabbing your pitchforks, I’ll give you a minute to process…

OK, you good? Let’s carry on then. 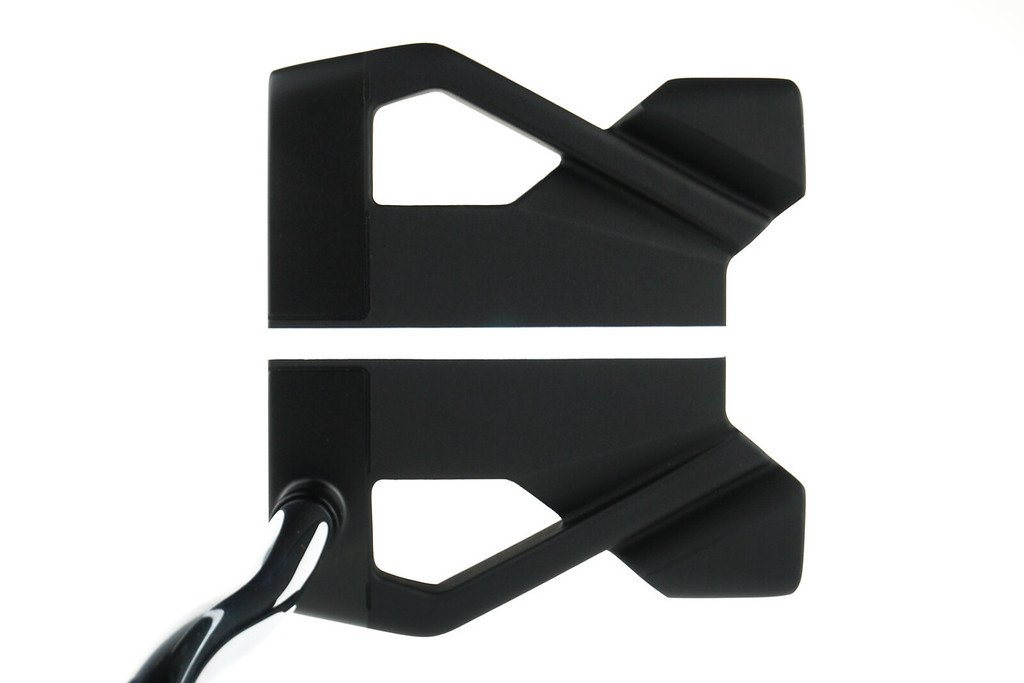 The buzz around this one is massive. There has long been a clamor of players from all skill levels about how cool this shape could be with an Odyssey insert in it, well the time is here. I really believe that it is more surprising that it took this long for it to happen, as opposed to it happening. Think about it, this is one of the most iconic, important, and successful putter shapes of all time. All of the others you would put on that Mount Rushmore of putter shapes? They have all been done by those other than their originators as well. 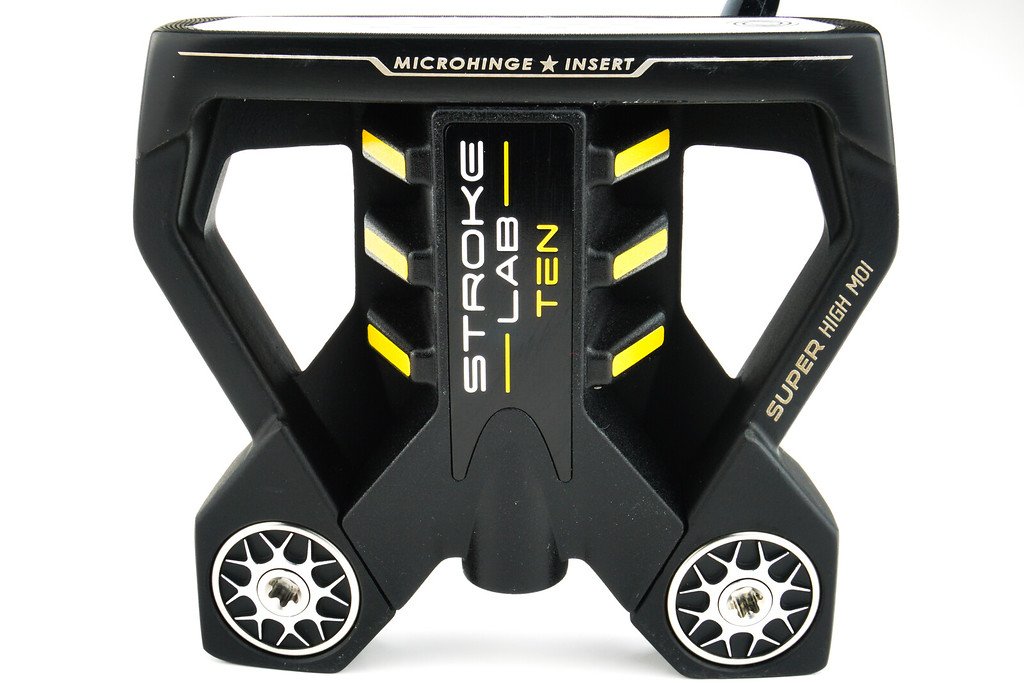 With that out of the way, I want to talk about the Ten itself. Though the looks are similar, there is a lot of different things going on under the hood. The literal core of the Ten is made of up the aforementioned ABS (thermoplastic) that is super light and allowed Odyssey to place the metal segments more to the perimeter of the design. This means a massive jump in MOI compared to the putter it is shaped like, 1,000 higher with a grand total of 5,504. More than that, the initial release pics are deceiving, this is not a full-sized mallet version of this shape, it is much more compact than that, and practically equal in angles and size measurables to the “X” version out there. 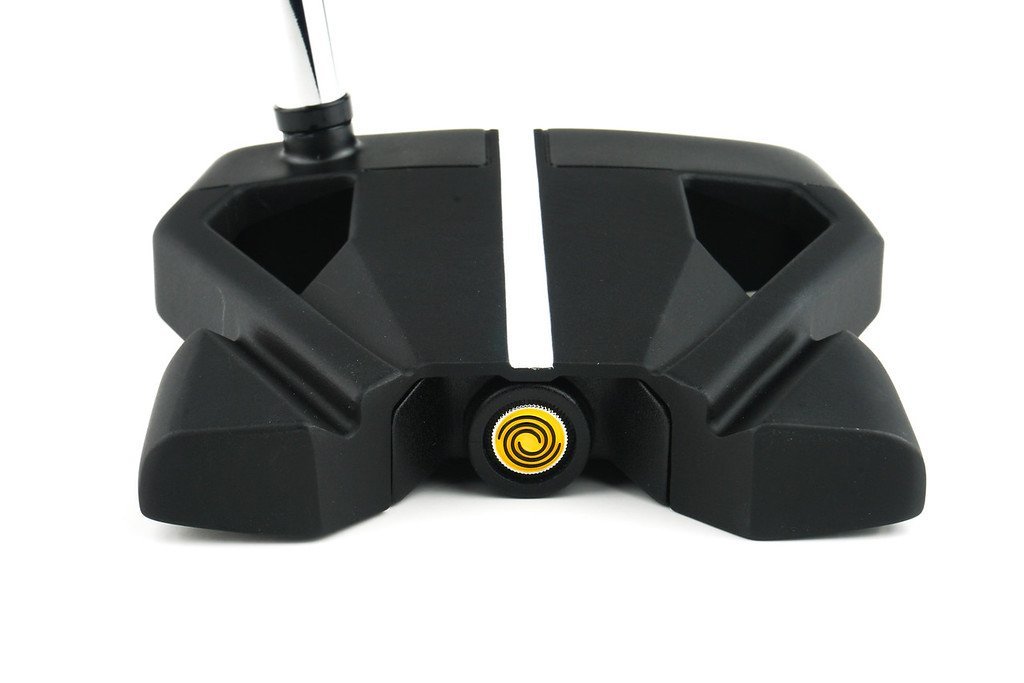 How is it on the course though? Quite good. I’ve already talked about the insert and the roll that it provided in the BoP, that all is true with the Ten as well, quick roll along with a feedback a little firmer than the Stroke Lab Silver putters. The biggest winners here in my opinion is in alignment and setup. The same “Hi-Def” Marxman alignment is present here as was in the BoP and the thick, bright, bold white line that runs the entire length of the putter is confidence inspiring for anyone who likes using an alignment line. Most impressive though, the Ten when soled at address, sits dead square. If you have used the non-Odyssey versions of this shape in the past, then you know they (and honestly most high MOI mallets) require some hand manipulation to set up square because at address they want to turn open. This fact gave me another bit of confidence in testing on the course and eliminated a variable which could be a bigger boon to golfers than they realize.

Bottom line? Both of these shapes are going to be staples of the Odyssey lineups for a long time in my opinion. They’re so well done from start to finish, and I think when golfers give them a go, they will come away very much impressed. One thing worth noting, they both felt like they eliminated the left side for me, and according to Sean Toulon this should be the case for most. I actually found myself setting up on a much more aggressive line at putts because of this fact with confidence I would see extreme directional consistency, and I did. The Ten will be the Rockstar here with all the groupies, but I very much encourage readers to not sleep on the Bird of Prey.

Go out and give the new Stroke Lab Black putters a roll, and then be sure to hop over to the new THP forums and tell us what you think!