2016 marks the return of the White Hot insert from Odyssey with its all new White Hot RX design. Not only is this line featuring a drastically re-worked and improved version of the classic insert, it also takes a variety of traditional Odyssey head shapes and mixes in a couple of nice surprises, one of which is the V-Line Fang which THP was able to get in hand for review. 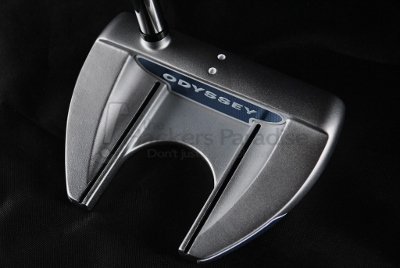 Odyssey has the most putter wins on Tour, it’s the #1 Putter in Golf, and White Hot is the most iconic insert of all-time. With White Hot RX, we’ve reached the next evolution in White Hot feel and combined it with better roll to get the ball in to a pure roll faster to help control your speed. White Hot is now even better.

We’ve taken the legendary White Hot insert that’s set the standard in feel for over 15 years and pushed it to the next level. And we’ve combined it with a dual layer injected molded insert that has a softer core so you get a putter that’s the ultimate in speed and feel.

The oval design that created quicker, better roll in our Metal-X and Odyssey Works models is in White Hot RX. When you combine the speed and roll of this elastomer insert with next generation White Hot feel, well, you’re onto something really big. And we’ve added a textured clear coat to the striking surface that works with the oval to increase friction and help get the ball rolling faster.

We’ve taken head shapes that have proven themselves around the world such as the #1, #7 and 2-Ball and added in the new V-Line Fang.  The V-Line Fang combines technologies and shaping of our #7 model with the popular V-Line mallet for improved alignment and accuracy.

Choose from our standard rubber or SuperStroke grip options to find the perfect setup for your stroke.

The entire White Hot RX line is a blend of tried and true headshapes alongside a couple newcomers like the #2 and V-Line Fang but there are also some tweaks in there like the #7 and #9 having a deeper face than in the past. Overall, what we see is a departure from the recent Fusion RX releases with a new line that, as always, keeps with Odyssey’s trend of evolving and pushing the boundaries. 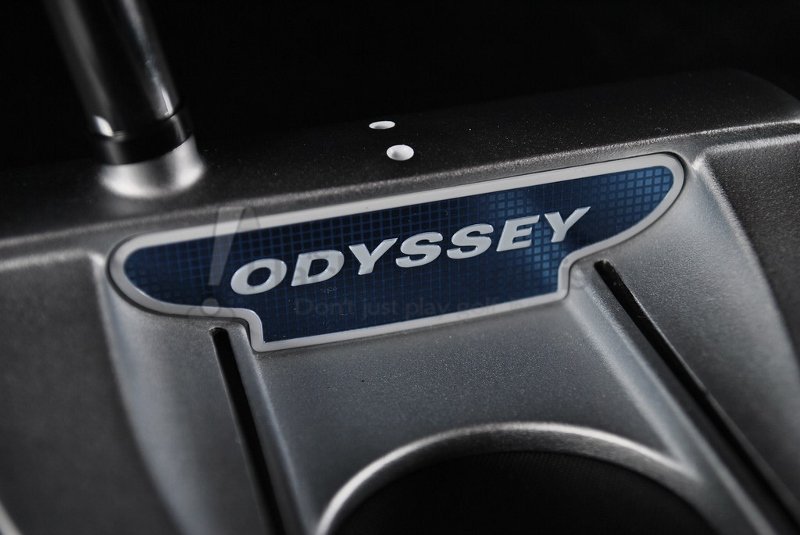 In terms of overall looks, the move back to a platinum finish definitely stands out but more noticeable is blue as the key accent color in cavity badging, paint-fill, as well as the angular accents on the sole of each White Hot RX model. With the all new V-Line Fang there is essentially a combination of two familiar shapes (V-Line and #7) to form what most will consider almost more of a mid-mallet look. In hand the platinum finish is very well done and though for this reviewer the accents were a bit out there, it is more because it is a departure from recent releases than anything else. The overall aesthetic package is definitely what one would consider “Odyssey” however and there is something very pleasing to the return of the all-white style insert for which the company has for so long been recognized. Add in that they continue to be ahead of the game in their cooperation with SuperStroke and providing the grips as an option and it makes for a well-rounded overall package. 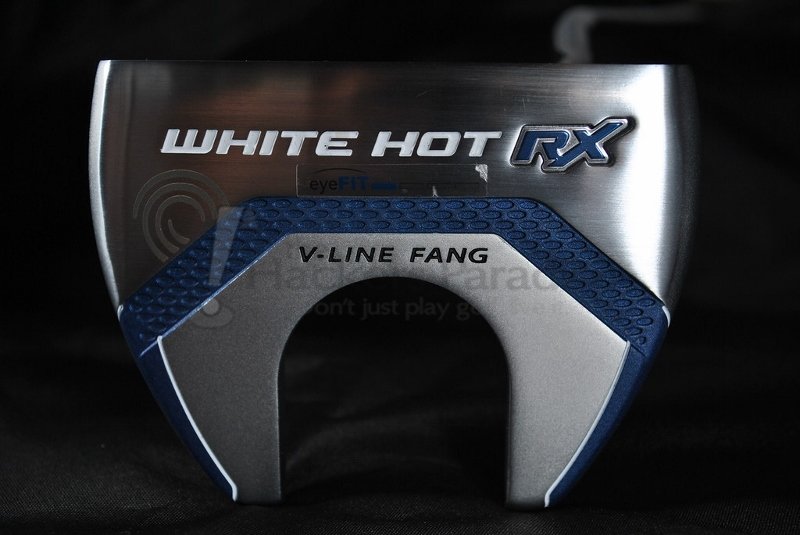 Straight forward, the V-Line Fang headshape is one that from this point on should be a constant in Odyssey releases as quite frankly it might be the best mid-mallet/mallet shape they have ever done. The shape itself as mentioned earlier is essentially a blend of the V-Line and the #7 which are arguably the top two mallet headshapes on the market. The overall balance of the V-Line Fang is very akin to that of the V-Line which should surprise no one given it essentially is that shape with a cut-out at the rear of the flange to aid in the alignment. The head really flows through the stroke without any type of manipulation necessary and lets the user have no fear over any type of twisting or turning through impact, regardless of where on the face the putt is being struck. 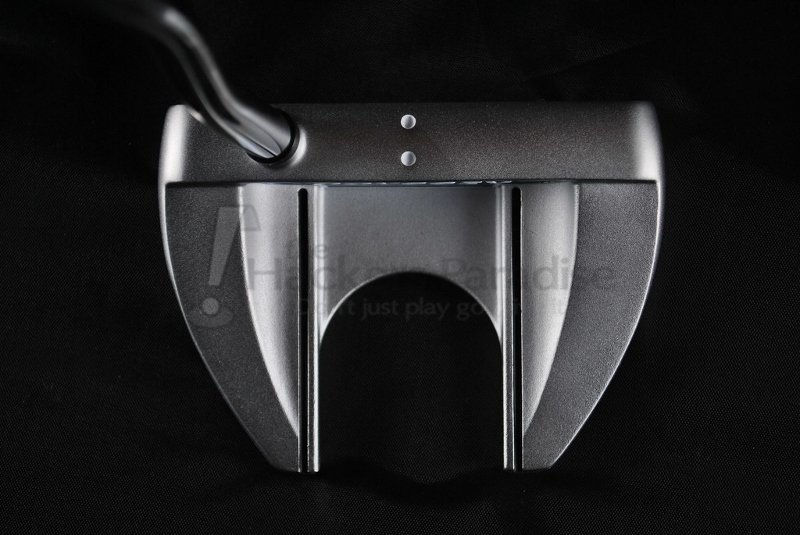 Alignment is where the V-Line Fang really shined during review, but in a couple of different facets. The shape itself is essentially one giant alignment aid thanks to the bevel on the flange combined with its elongated nature as well as the “fang” cutout. Additionally Odyssey has applied a rather unique alignment line/dot combination to the head with dual white dots on the topline along with two black lines the length of the flange. This lead to a markedly easy setup behind the golf ball and a real level of comfort with how the overall shape squares to the ball at address. While at first glance the white/black alignment contrast may be confusing to some, it really allows for the user to find what works for them. 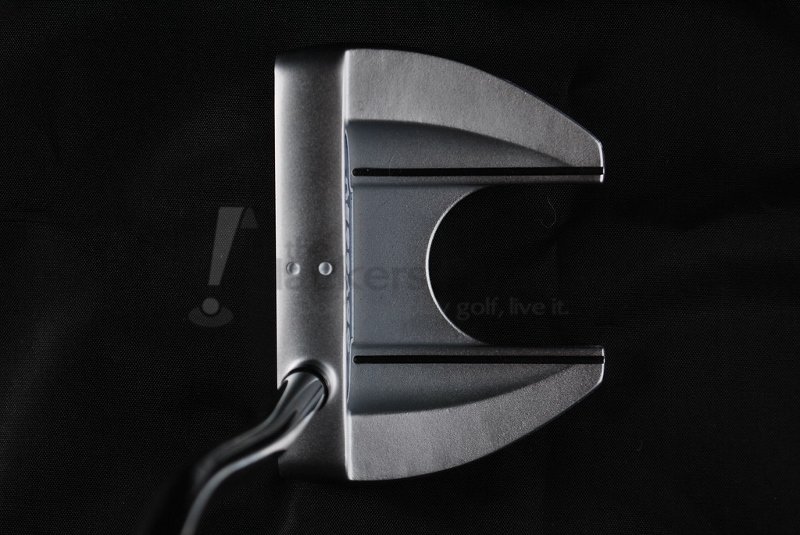 When it comes to Odyssey putters, this is always the category with the most intrigue as it pertains to the overall performance. We have seen the company continually evolve their inserts to the point that the question is often asked what else can be done. As massively successful as the Fusion RX insert has been (and it is going nowhere), the company has decided to revisit and revamp their White Hot insert with the goal of maintaining its much appreciated feel, but with the roll of the Fusion RX. The obvious step here was to actually imprint a similar face pattern to what is used in the Fusion RX metal mesh into the face of the White Hot insert, but that posed some issues. 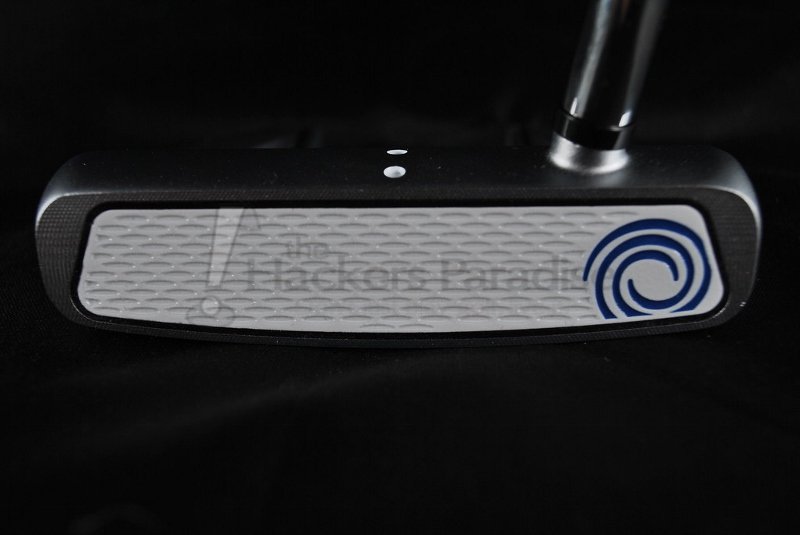 The biggest challenge of all this came in keeping the sound/firmness they were after while creating the texture necessary to maximize the roll off of the RX face. In order to get the right speed, sound, and feel the company worked hand in hand with their golf ball department to find the optimal material and setup to achieve their goals. This resulted in designing a dual material insert with a super soft internal structure combined with a face that would hold up to the oval pattern molded into the face. After going through 17 different materials the company ended up with an elastomer material instead of their traditional urethane. This produced a similar White Hot(WH) feel thanks to the super soft core, yet a roll not previously achieved in a WH insert because of the oval face pattern. On top of that, to fine tune the sound/look texture was added through a clear coat on the face to fine tune the sound and look, this was traditionally done in the mold of the White Hot inserts but because of the narrow walls and surface area created by the oval pattern of the White Hot RX it had to be applied after the fact. 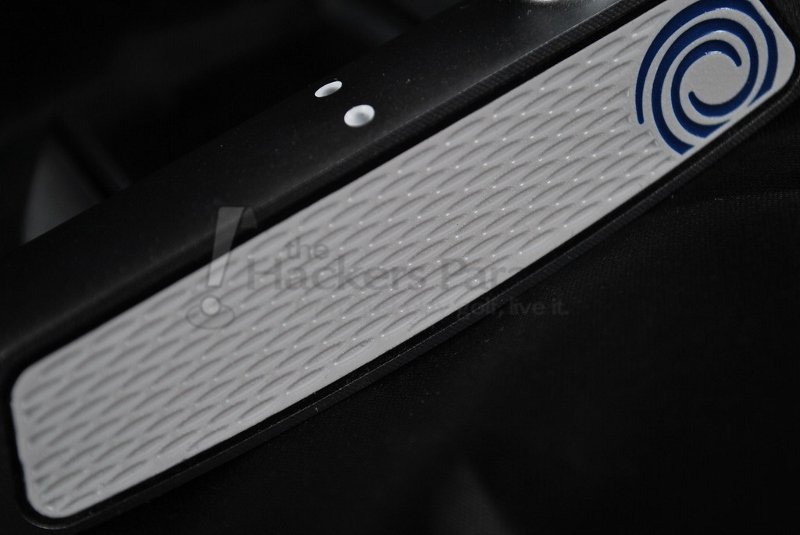 As with any release, what it comes back to is does it perform or not. For this reviewer, the new insert produces a roll much more akin to the Fusion RX than the original White Hot and produces a lower launch and quicker forward roll off of the face. During the review on a variety of surfaces skidding was not an issue for a variety of users who were asked to make some rolls with the putter. In terms of the sound/feel, it is definitely a “softer” feeling insert overall, which given that the surface area which comes into contact with the ball is lessened thanks to the face pattern really isn’t all that surprising. With that said though, it is not overly soft in the opinion of this reviewer, it actually walks a nice balance in that regard. Most importantly perhaps though the White Hot RX and Fusion RX combined now give Odyssey options that should allow most anyone to find a sound/feel that they prefer. 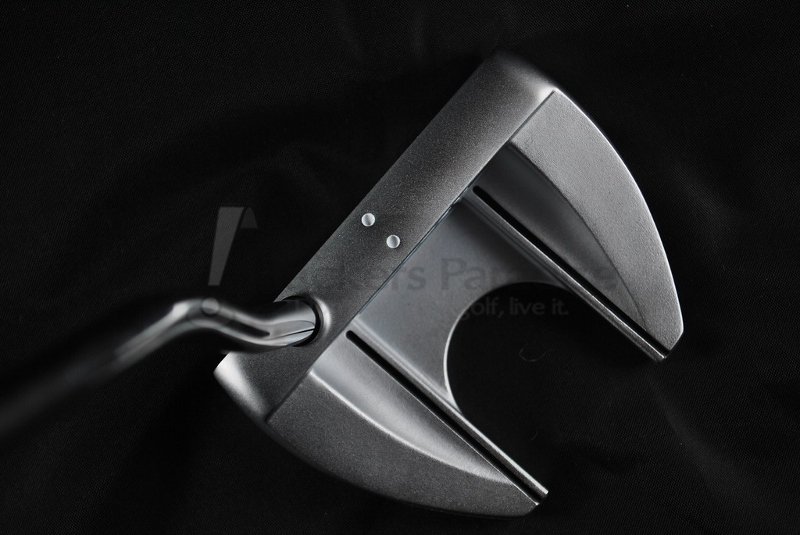 Where distance control and accuracy are concerned the White Hot RX performs just as one would expect an Odyssey insert to. Misses across the face are met with an expected (and slight) distance/pace drop-off compared to center putts, but they track according to the intended line extremely well which is no doubt thanks to both the insert and the higher MOI of the V-Line Fang headshape. The pace took no time to acclimate to compared to the Fusion RX insert, though as we know some golfers are more perceptive (or mental) to material/insert changes in their putters so that may vary. Overall, the reaction off of the face through the stroke should provide ample feedback for users who want/need that in a putter but also appeal to the less discerning user who simply prefers an insert and appreciates the headshape/design.

Innovation is something that Odyssey prides itself on and the White Hot RX line and the V-Line Fang design in particular are continued examples of the company not being willing to simply rest on their past successes. There is no denying that putters are the most personal of clubs in the bag, and everyone will have their preferences, but where performance is concerned the White Hot RX line should garner significant attention as yet another impressive release from Odyssey.  More than that though, it is the opinion of this reviewer that the V-Line Fang shape should become a staple of future releases for the company.

The V-Line Fang as well as the other six models in the White-Hot RX release have an MSRP of $159.00 with a standard grip and $179.00 with SuperStroke grip. The line has a scheduled release date of January 29, 2016 and more about the entire line of putters can be found at that date on www.OdysseyGolf.com.