Innovation born out of Buffalo, NY. No, this article is not talking about those delicious Buffalo Wings, instead it’s a look at a revolutionary take on the modern day golf ball. OnCore Golf has been on the scene since 2009 working on a way to make the game of golf more enjoyable for those who tee it up. What started with a Kickstarter campaign for their Omen golf ball, has matured into the two different ball offerings that the company has released this year. For 2016 OnCore Golf has refined their metal core golf ball with the Caliber, while also developing a soft two-piece ball called the Avant. 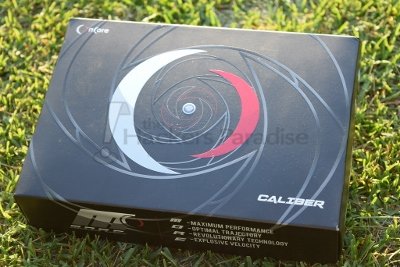 The Caliber is the most radical departure from traditional solid rubber core construction in nearly 30 years. Our patented hollow metal core creates significant rifle spin, while reducing side spin, allowing the ball to travel along a straighter trajectory similar to a bullet leaving the barrel. Putting is improved due to the perimeter weighted design of the ball

When it comes to technology in golf, clubs draw the most attention, while golf balls seem to get a bit glossed over. Not to say that ball technology is not as exciting, but it lacks a certain visual aspect as most of the characteristic changing tech is packed underneath a dimpled cover. However, the concealed contents of that core is what drives the golf ball in terms of performance. What is unique about the OnCore Caliber golf ball is that at the very center of the ball is not a rubber formula, but instead a .9 inch hollow metal ball. 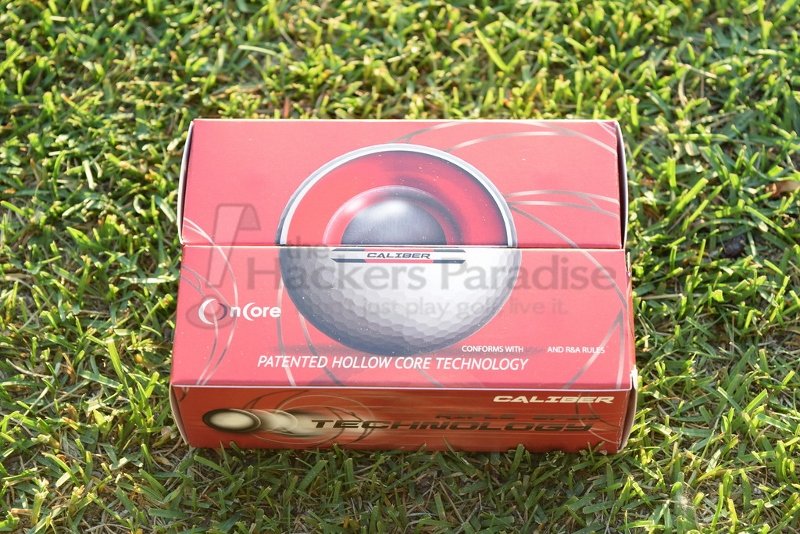 Metal? In a golf ball? That’s right, a hollow metal ball is what sets the construction of this ball apart from every other offering.  By utilizing this type of design, OnCore has found a formula for a golf ball that will produce a stronger amount of rifle spin, which will in turn reduce the amount of side spin on the ball. Want a simple explanation of that? The hollow metal core is going to help golfers achieve a straighter ball flight by reducing the amount of draw or fade spin imparted on the ball. In fact, according to OnCore, this ball should help reduce sidespin by 20-30%.

Caliber comes in with a compression rating of 80, which makes it a good option for those players who tend to have a swing speed below 100 MPH. The previous version of the hollow-metal core golf ball, the MA 1.0, had a higher compression rating of 90. With the difference in those numbers, golfers who tried the MA 1.0, should expect to find the Caliber a little softer, longer, and with more spin around the greens. According to OnCore, it is the most optimized version of metal core golf ball they have produced. 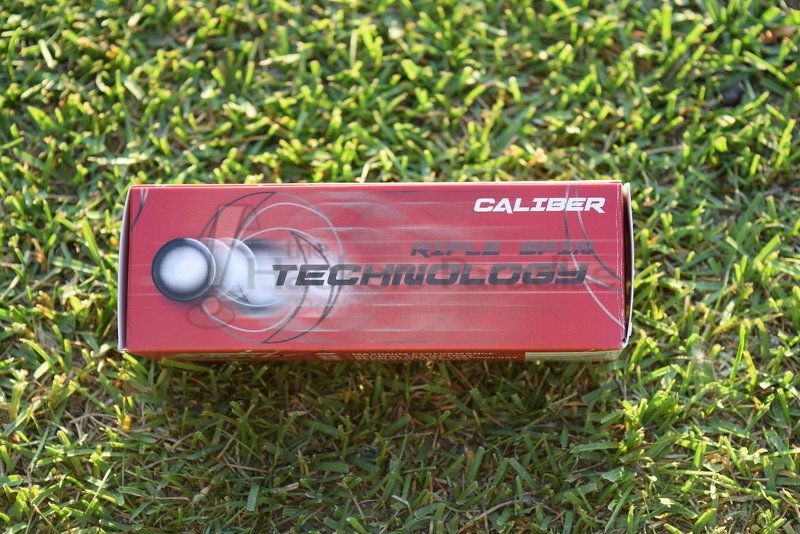 When describing the design features of this golf ball to others there are often two questions that immediately get asked. The first inquiry is always along the lines of the legality of a metal core. Rest assured for all interested, the Caliber golf ball is in fact a conforming piece of equipment according to the USGA.

Following a conversation about the legality of the Caliber, the focus usually shifts to sound. Audibly this ball sounds a lot different than others, which makes sense because internally it is different. Striking the ball with an iron produces a noticeable “clack” sound compared to what is heard with the Avant.  Living in an era in which sound is analyzed pretty closely, the tone of playing the Caliber is a standout characteristic. Even with being a golf ball aimed for a lesser swing speed, the sound profile presents a feel of a firmer ball. 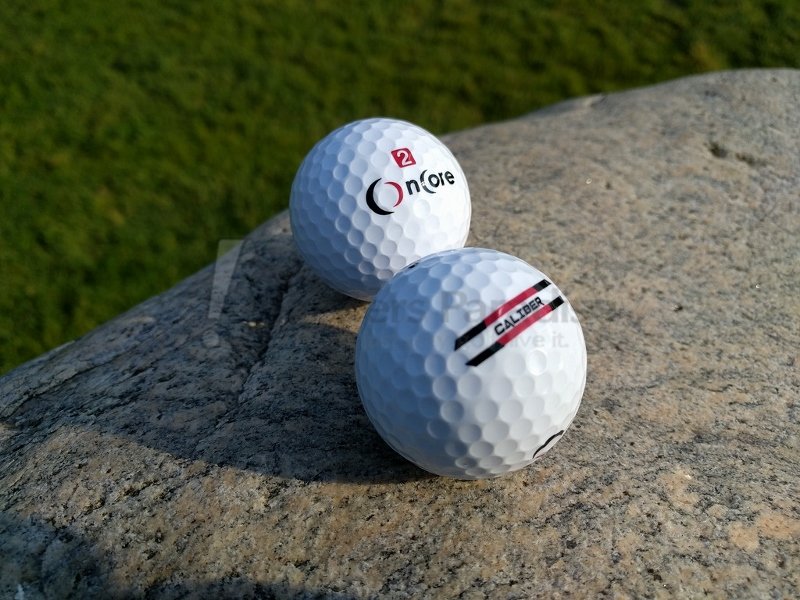 Cast aside the sound and the Caliber was a rather enjoyable ball to put in play. Shot shapes off of the tee did appear to have less lateral movement, a credit to the rifle spin. Being able to work the ball on approach shots was still feasible. The reaction on the greens was overall pleasing. While shots did not grab and spin back, like some are accustomed to seeing with high level tour balls, shots did not exactly hit and run out uncontrollably. In fact, the Caliber proved to be a very good ball when it comes down to being in control. 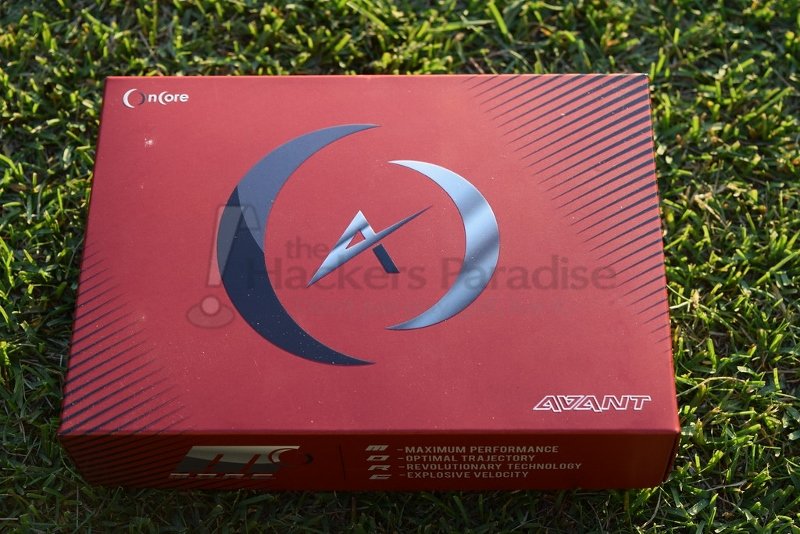 For the player that wants phenomenal distance, with a super soft feel. The AVANT offers low spin off the driver and high spin on wedge shots.

In today’s market, there is no shortage of golf balls that are targeted for the golfer with a slower swing speed. Companies are certainly realizing that not every player has a swing speed of 110 MPH, or even 90 MPH. OnCore has a golf ball that performs well for players whose swing speed is under the century mark, but what about for those who desire a little softer design to help get maximum performance from a golf ball? OnCore Golf has a ball for that person too, which they call the Avant. This two-piece ball has a low compression rating of 65. Confused by what that means in terms of performance? Well in the most simplistic form, the lower the compression rating there is on a golf ball, the easier it is for a player to compress the ball. Compressing the ball on contact is vital to generating maximum, controllable distance with desired spin. 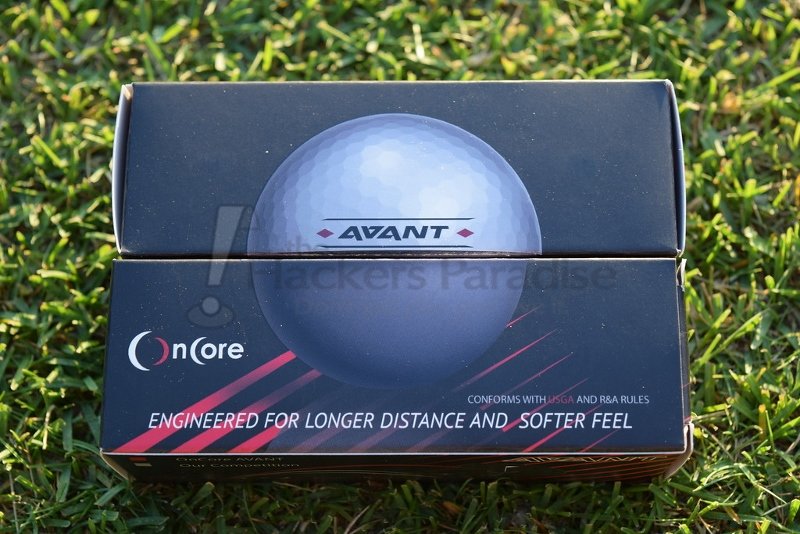 Undoubtedly, the metal core of the Caliber is the ball that will grab more attention, however the Avant held its own against other two-piece balls on the market. The sound of the Avant is much more in line with what consumers can come to expect from these types of golf balls. The lower compression certainly aids in the strong performance that was witnessed. In fact, of the two golf balls tested, the Avant carried the preferred feel from both tee shots and long approaches.

With the Caliber being a ball that aids in having a controllable ball flight, the Avant goes after that piece of the puzzle that majority of golfers seek, and that is distance. As was highlighted above, being a lower compression, two-piece golf ball helps give the Avant a performance that will compare nicely to many other “distance balls” on the market. 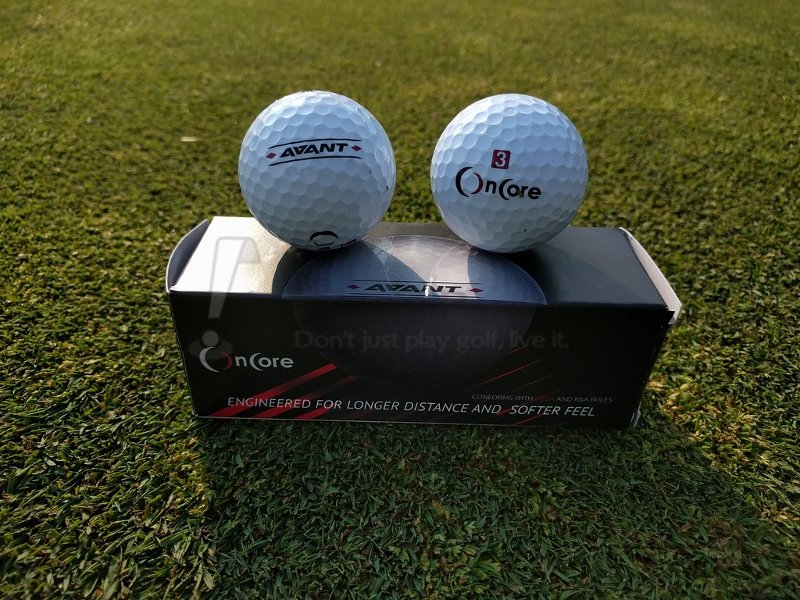 Choosing a golf ball for one’s game is certainly a personal choice. Whether a golfer is looking for a ball with some exciting technology to talk about, or something that is going to give good performance without breaking the wallet, OnCore Golf has consumers covered. The easiest way to differentiate between these two golf balls is to think that the Caliber is built for control, while the Avant is built for distance. However, don’t just hang on that snapshot, as trying both balls might lead to a surprising choice. Currently the company is offering a free two ball trial pack to anyone that is interested in giving these balls a chance. Priced competitively, the Avant costs $19.99, with the Caliber coming in at $29.99. More information, including a look in to the story behind the company, can be found at www.oncoregolf.com.