There are many in the golfing world who strive to look down at a sleek and minuscule iron profile, with a sharp top line, no cavity, and limited offset.  The problem, of course, is a lack of forgiveness, launch, and distance retention that is introduced by playing an iron in the muscleback category, leaving much to be desired when making simple swing errors that stray fractions of an inch from center.  Ping engineers are leading the charge on innovation in this area, releasing the S55 previously with a ‘hidden’ cavity, and now releasing the iBlade.  An iron that is almost impossibly subtle to the eye, yet jam packed with elements that aid golfers needs in a profile of this size. 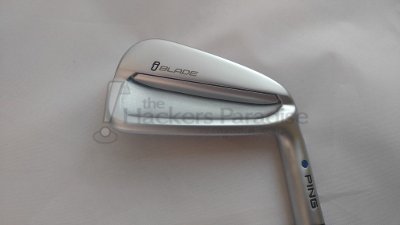 When catching the first glimpse of the iBlade in the bag, the subtle cavity pops immediately with the rough matte finish without any other markings.  Secondary to that, is the elastomer insert that looks like it’s simply badging underneath the cross section of 431 stainless steel.  It is a fascinating concept to look at an iron in one way, yet know the physical makeup is something very different.  This is not an entirely new concept, but it is done in a way that makes it very much unique to Ping, and plays along very well with the idea that this iron has a truly ‘blade’ profile.  Neither the top line or the limited width of the sole are overbearing on the eye, and golfers who are quite used to the muscleback shape and overall sizing will immediately feel at home.

The Ping iBlade has taken the S55 concept a step further in many ways, which will be explained and discussed in this section of the review, including some explanation from Ping.

From Ping: The thin face (half the thickness of the S55 iron) yields greater ball speeds for increased distance throughout the set with higher overall trajectories and precise control. A hydropearl chrome finish repels water for more control and helps minimize fliers from wet conditions and lies in the rough.

From a visual standpoint, the groove area of the iBlade definitely stands out with being slightly darker than the outer portions of the face, which is not overly noticeable unless pursuing it.  This particular tester is quite meticulous about keeping the face of irons clear before and after all shots, but even in the morning dew there never seemed to be excess water buildup. 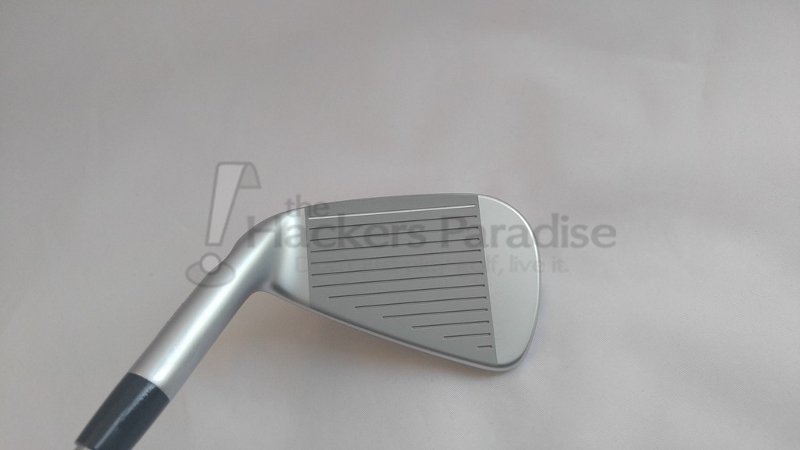 To the face itself, testing showed a launch that ranged between mid and high depending on swing style, proving the iBlade to not only be versatile, but generating some excellent launch conditions when paired with the S300 shafts.  When struck well, there was a pretty telling shot shape, arc, and sound that suggested the contact quality was on the higher end, yet none of these scenarios includes shocking numbers either short or long of the expected distances.  The 3 iron replaced a utility iron in a similar loft for much of the testing period, and confirmed the lively face by producing quality distances with flighting that had the potential to perform both off the tee for fairway roll, and approaching the green for softer landing.

From Ping: The unprecedented feel is achieved through a combination of soft 431 stainless steel and a larger surface area behind the face that houses an elastomer insert. The insert is “activated” at impact, resulting in more vibration damping in your hands for a softer feel and pleasing sound. 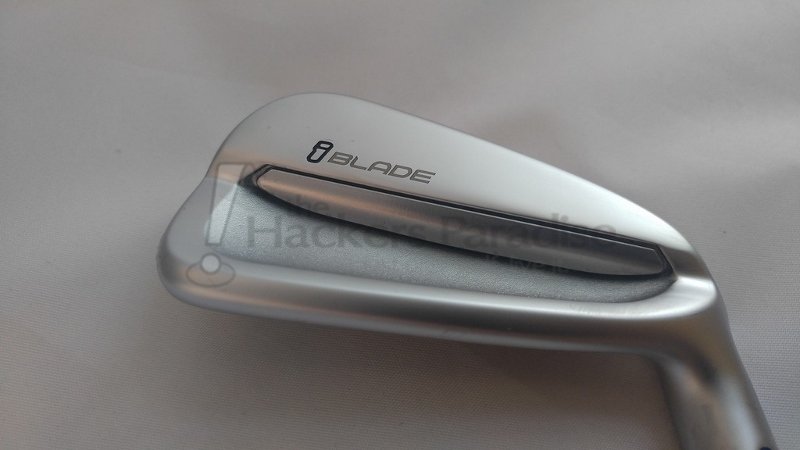 The sound and response profile of the Ping iBlade is very much in a world of its own.  Between the steel selection and cavity filled with elastomer, golfers will enjoy a very full, mid-range contact sensation.  The comparison to a more typical full body muscleback is an interesting one, as the iBlade introduces the sensation of full contact that may not be as rich, but is definitely more accepting of shots that stray from center, or miss a groove either way.  During testing, there were early tee times that included tired (read: bad) swings that would normally sting and numb the fingertips, however that feeling was notably reduced with the iBlade.  The presentation of a poor strike is still audible and visible; it is just not as troublesome to the fingers which is a wonderful change of pace.

From Ping: Nearly “pure” tungsten toe weights (netting a 70% increase in mass relative to the S55 iron) are pressed into the toe of every head to increase MOI, a key factor in the precision of the iBlade iron.

Ping, like some other manufacturers, are finding very creative ways to provide perimeter weighting to smaller profile irons in locations (bottom and heel/toe) that truly benefit the player on imperfect yet still decent contact.  By introducing a lighter material in the central location, they are able to send weight, like the nearly pure tungsten, out to the toe side to improve on the overall head MOI while not making the head overly heavy.

During testing, the experiences of not far off center shots surprised.  It was not a matter of perfect contact sensation and result, but rather a greater range of error and result quality without the overly harsh sensations that a compact iron would typically generate.  It is a far stretch from a heavily forgiving SGI offering, but it does seem to close the gap between muscleback-like visualization and genuine forgiveness, even if it is in a smaller window. 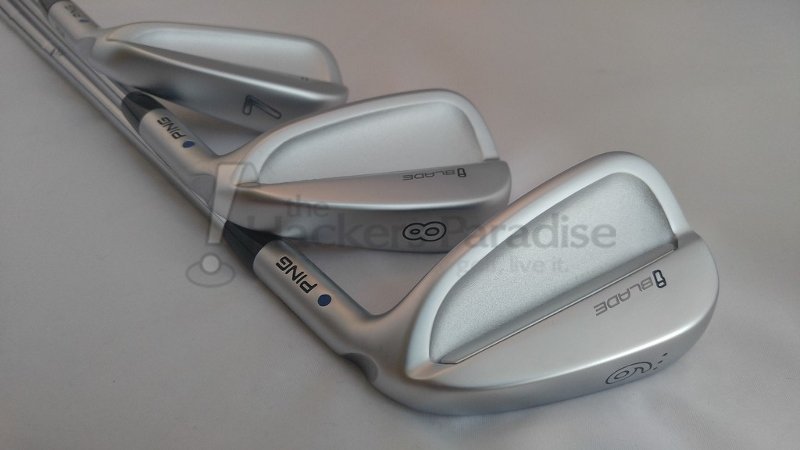 From Ping: Refined bounce angles and ample heel relief, optimized with the same sole width as the S55 iron, produce a workable sole design for confident shot making from all conditions. Further precision comes from the milled tour-spec grooves and precision-machined fly-cut face.

One of the more concerning elements of the iBlade profile from a forgiveness and general error standpoint is the notably narrow sole, which aligns well with other iron heads in the muscleback category.  It promoted an expectation of a higher percentage of shots that caught the turf early, producing distances of around fifty percent or less of the intended target.  It was noted that Ping refined their bounce angles to help with marginal relief in this aspect, and testing of the product seemed to ring true in most situations.

Overall divot interaction was neutral for a muscleback profile and in some cases more akin to a slightly wider sole cavity back.  The divots that were produced regularly were relatively shallow, with the freedom to really drive into the turf if attempting to trap the ball in different shot styles.  Despite the visually narrow profile in the bag, there is nothing about the iBlade that overly attacks the turf unless it is pursued, and that comes at a big advantage.  The leading edge just did not seem to have that overly sharp profile. 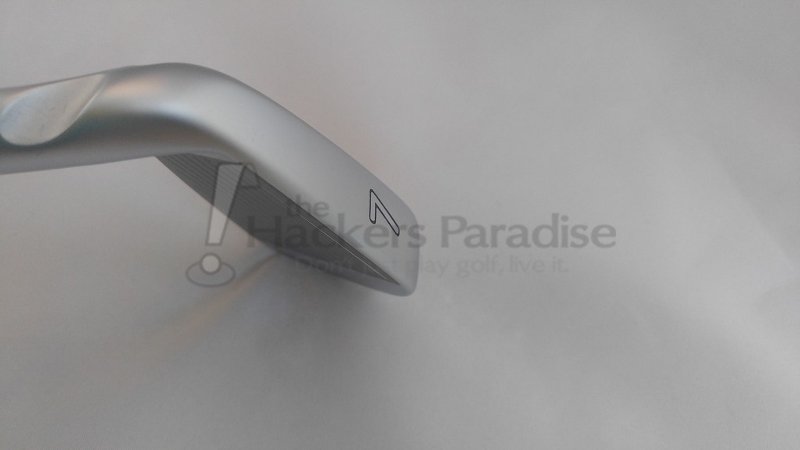 There are a handful of golf companies extending the boundaries of what can be defined as muscleback or blade irons by introducing technology and power packing construction into these minute faces.  Ping is no exception with the iBlade, and has proved that material variety and the appropriate weighting can introduce marginal amounts of forgiveness and distance increase.  These irons should be geared towards the golfer seeking more out of a muscleback or subtle cavity back iron that currently feels excellent and works the ball every which way.

Despite the compact profile, there was a feeling of optimism and confidence introduced by knowing that perimeter weighting would support subtle departures from center, and the punishment for these types of swings were repeatedly greeted with audible feedback without heavy distance or accuracy losses.  The Ping iBlade irons are not going to provide sweeping amounts of face or turf forgiveness, but they will contribute to a strike that is slightly better than a golfer may deserve.  All this is achieved while still maintaining a unique sound that makes sense for the size of the head, and a top line that is delightfully compact.  For more information on the Ping iBlade, visit www.Ping.com.