When a company makes a claim of ‘best of x’ or ‘best in x’ it’s a pretty bold claim. Being the best at something is usually a subjective thing that isn’t always able to be factually proven. Enter Rosemark Golf and their Krutch II putter. They claim to have the best putter grip in golf but the catch is that it isn’t used on your every day putter. They’ve got an interesting if not unique putting methodology that incorporates this grip so when they sent it along with two sizes of their Krutch II putter to THP for testing I was intrigued to say the least. The technique is called forward facing putting and the Krutch II is designed to perfect this method. What exactly is it and does it work? Check it out.

Did You Know- Sam Snead was a forward facing putter?

Look
The look of the Krutch II putter is definitely unique. It’s easily the largest/longest putter I’ve ever used or tested. It definitely garnered a few awkward stares and glances from others around the putting area but I think it was just a little putter envy going on. It’s a formidable club that has a larger than normal grip (both in terms of length and thickness) and the mallet style putter head that is a subtle mix of a mallet style and a blade style. The Krutch II has a heavier feel to it but surprisingly it’s not from the putter head itself but in general its all in the shaft. The True Temper steel shaft that’s in the putter feels on the heavier side that when paired with the longer and heavier grip creates a nice weighting that comes in a nice package which helps keep the putter stable.

Technology/Use
The Krutch II Putter is a single anchor point, long shafted putter that’s been designed to anchor in the armpit. Using a single, straight arm down the grip while facing the hole, the golfer swings the club calmly and naturally as if swinging their arm by their side in a pure pendulum motion. This action produces the simplest, most consistent, and most repeatable putting stroke ever used in the game of golf. Confused? Think of it this way, if you wanted to roll the ball to the hole, would you roll it side armed of under handed? Under handed right? That’s the same concept in play here. The body’s natural arm motion is under handed, not side arm or over hand, which activates and uses the larger muscles in the arm more naturally, easily, and without as much natural body resistance.

Using this concept, Rosemark Golf created a grip that is both US Patented and USGA approved so we’re talking something that can legally be used on the course here folks. The Krutch Putter’s grip helps to automatically square the face of the putter head as it impacts the golf ball. The grip is thicker and slightly more angular in nature which fits the natural contours of your hands better which helps in the squaring of the club face. It has a smooth surface that somehow does not induce any slippage while holding it which further adds to the ease of using it.

Testing
When testing a new club, you generally focus on the club and certain aspects of the club itself. When testing the Krutch II I had to focus on the club as well as a new ‘swing technique’ which made for a very unique testing experience. I’ll break this portion of the review into two areas, the putter itself and the technique associated with this putter. 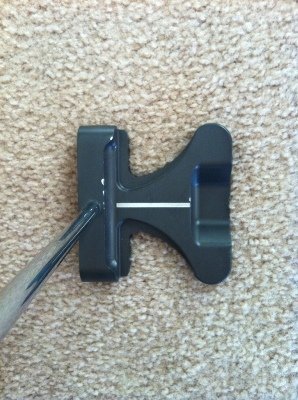 The putter itself is easy to use and manipulate using not only the ‘armpit anchor’ method but also in the traditional manner. It does take a little getting used to mainly due to the anchoring of the putter to the body but otherwise the putter itself is good. The mallet head design has some good MOI properties to it that prevents severe twisting on mishits while offering some good feedback and forgiveness as well. The ball jumps off the face a bit with a muted click sound but once I got used to that it wasn’t a big issue at all. It has a really simple alignment aid which I liked and actually helped me take the putter straight back and through. The Krutch II looks almost as if it was designed to take your mind off the putter and to have you focus on your technique or reading the green instead.

The technique was difficult to adjust to but there is some method to the madness here. While awkward, I did see some nice results with putts inside of six feet. Utilizing the underhanded concept for manipulating the putter, I found the ball to roll true without much skipping or skidding on the green. Where I noticed some ‘issues’ was in the longer putting department. I found myself taking an exaggerated back swing with a quick follow-through. This proceeded to have the ball jump or skid across the green before it settled into its roll which by then was too late for it to stop near the hole. I’m sure this is more user error than anything and would require much more practice but it’s interesting to see how different the results are when you’re facing the hole as opposed to standing 90* from it. But there is something to be said about looking at the hole face on vs. the more traditional way and it’ll be curious to see if this technique catches on or not. 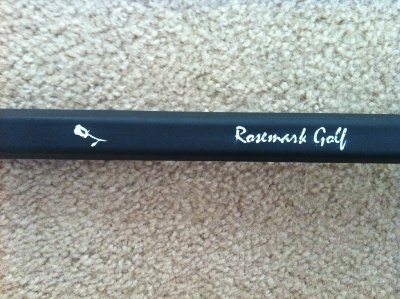 Overall
If you have trouble putting, perhaps you don’t need to change just your putter. Maybe you need to change your putter and your point of view. I know this has changed my point of view a little bit. Will it for you? The Krutch II putter is available in both RH and LH options with either black or red grips and retails for $199. It can be customized to fit a golfer who is between the heights of 5’4” and 6’4” so golfers of almost any height are able to use this. Click on over to www.rosemarkgolf.com to check out their videos regarding the concept of forward facing putting and how they’ve built the Krutch II putter to work with this method.