It is always fascinating to see when ideas and philosophies, new or old, begin to gain traction. Specifically in golf it seems that all it takes is some PGA spotlight to let loose the domino effect. To me, this is the exact situation going on with counterbalancing in putters. We have seen a wave of counterbalanced releases from multiple companies in the last year and frankly, I love it.  From the smallest company to the largest, you name them and they have at least been tinkering in offering some sort of counterbalanced putter to their customers. That being said, I was extremely excited when SeeMore announced that they would be making their way into this.

SeeMore Counter Balanced Putters are the next evolution in longer than standard length putters, offering the golfer the game improvement benefits of a belly putter in a non-anchored design. The counter balanced feature actually allows the golfer to realize the advanced stabilization benefits of a longer and heavier putter without feeling like the putter is too long or too heavy. This is achieved when the golfer, by design, chokes down on the longer and heavier grip, effectively using the added weights at both ends of the putter for added balance to ensure a smooth, repeatable, effective stroke.

SeeMore’s Counter Balanced putters are designed to be optimal at around 38 inches for most golfers, typically 3-4 inches longer than a standard length putter would be. Counter balanced putters are custom built at SeeMore’s Tennessee factory with a minimum of 25 grams of extra weight added to the putter head, in the form of a pure milled internal hosel. This also allows for any time customization of lie or loft as needed. The extra head weight and the extra weight of the longer and heavier shaft is all balanced out by the fact that the special 18 inch grip weighs 125 grams. SeeMore Counter Balanced putters can be customized as desired to whatever length the golfer wishes.

This is a bit of a unique review in that we are not only taking a look at the counterbalance technology that SeeMore is bringing to the table, but also the putter design that was provided for this particular review. Because of this, the most effective route, in my opinion, is to touch on both aspects within the review.

For the purpose of this review SeeMore sent their PCB counterbalanced model at 38”. The PCB has a heavier headweight of 375g and features SeeMore’s 18-inch belly grip which weighs 125g to bring up the total weight of the putter while also offsetting the increased headweight.

At first glance the PCB is a very simple design, essentially a wide flanged blade style center shaft putter with some incredibly solid lines to it at address. The PCB features SeeMore’s black nickel finish, which is both good looking in hand and effective in preventing glare in the mid-day sun, a definite bonus. From an alignment standpoint, the singular siteline combined with the slightly wider and more squared off flange really sets up to the ball incredibly well on the greens. Add in the RST along with some very nice milling on the face and you have an impressive overall package for the $150.00 price point. 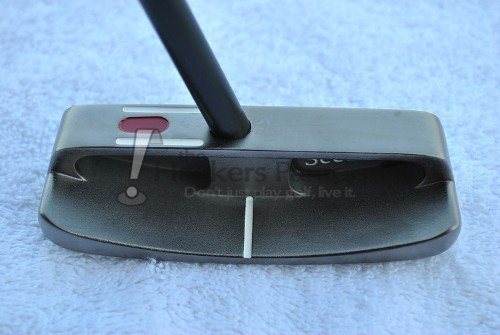 The PCB is made out of 303 Stainless Steel and features a precision milled face. In my time with the putter I found it to put off a deeper sounding click, which resulted in a softer “feel” than I initially anticipated it to have, as stainless steel traditionally provides a higher pitched click off of the face resulting in a “harder” feel. I credit this very nice sound/feel both to the precision milled facethat reduces the surface area of the ball that comes into contact with the face as well as the small pocket cavity that the design features. 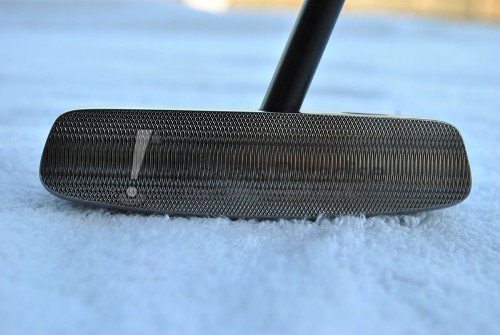 Although counterbalancing is not a “new” thing in golf, to most amateurs it is a new concept for their personal games. The concept itself is a rather simple; an increased headweight combined with an increased weight on the butt end of the putter will not only increase the overall weight of the putter, but also prevent the balance point from getting too close or far away from the head. This is beneficial to most amateurs because a heavier head will smooth out their natural stroke, while the counterweight keeps the balance point of the putter in a position far enough away from the head that the putter doesn’t give off the sensation of being cumbersome through the stroke. This is a concept that I had researched several times before when I was considering giving a belly putter a go, but until this review I had not given it much thought in a shorter and more manageable form like SeeMore has brought to the table.

For the sake of keeping things from becoming too clustered, I think that breaking the counterbalancing down into different sections will be the most effective for this review.

On a standard length putter the grip is not all that big of a deal for many. Typically most grips fall within the same weight realm of each other and will not affect the balance of the putter one way or the other. With SeeMore’s counterbalanced putters however, the grip is the key to the effectiveness of the counterbalancing. SeeMore counterbalances their putters with both added length (3-4” over a users “standard”) and an 18” FeelTec belly putter grip which weighs 125 grams. Coming in I was concerned about how much the look of an 18” putter grip would bother me on a non-belly putter, but right out of the box I found that I actually liked it a lot. This was twofold for me. First, the grip itself is a good combination of being soft and tacky as well as maintaining a very constant diameter throughout the grip (unlike a standard pistol-style taper). Second, the previously mentioned diameter, combined with the overall length, allowed for me to move my hands as I deemed necessary based on distance from the hole (personal preference) without any issues. It may just be a grip, but it is a well thought out pairing for this lineup. 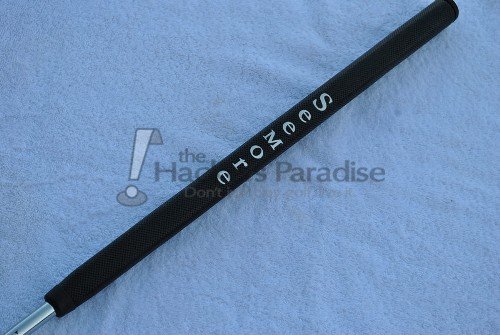 The balance is the overall key to the effectiveness here. As mentioned earlier, it is a fine line of balance that must be walked in order to smooth out the stroke with the heavier head, but also add enough weight in the back end to keep it from feeling like you are putting with a sledgehammer. In hand you can immediately tell that the overall weight of the putter is higher than that of a standard length putter. In fact, it took me aback at first even though I should have been expecting it. However, after placing the putter at address and making strokes it went from a feeling of “heavy” to a feeling of being extremely “balanced”. The combination of a headweight in the 375-385g range, as opposed to some companies going closer to 400g, and using the added length and 125g putter grip to counterbalance it rather than adding any additional internal weighting puts it in a very comfortable position of not making you fixate on the overall weight, but rather the way it flows throughout the stroke. 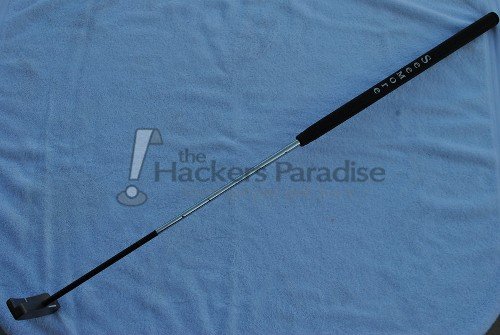 Coming into this review I expected to have a short period of adjustment when it came to distance control, but what I personally ended up seeing was quite the opposite. Because of the counterbalancing keeping the overall balance point from getting to far towards the head, I really felt like no additional adjustments to the weight were necessary for me. It allowed for me to keep the same stroke with no ill effects. The counterbalancing of the putter truly shined for me most on longer putts, to the point that I really felt like I could try to make them rather than worrying about leaving myself in a good spot for a tap-in second. I will say that initially I started out a bit timid on the short putts because I knew I was using a heavier putter, but over time I realized that there was nothing to be timid about, as the weight didn’t change anything but making the putter feel more free and flowing through the stroke. Another fun thing that I actually found myself tinkering with because of the belly grip was grip positions. Though it will not be for everyone, it is certainly nice to be able to choke up or down during the round depending on the distance from the hole. 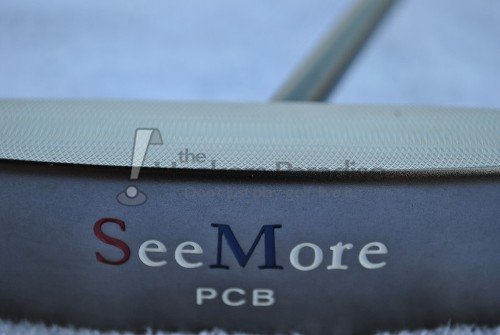 After being able to put a counterbalanced offering through its paces for an extended period of time I definitely see just why the idea is gaining such traction right now. I find it difficult to find reasons that an amateur golfer wouldn’t like to free up their putter stroke more and allow the head to do its job rather than over manipulating it. Beyond that, when you combine counterbalancing with something like SeeMore’s RST, it seems that so many variables are taken out of the equation that a user’s confidence can only improve on the greens. Additionally, SeeMore is offering an impressive array of headshapes within their counterbalanced lineup ranging from $150.00 (PCB in review) up to $345.00, so there is something for everyone over multiple price ranges. I also found it impressive that SeeMore will even convert your standard SeeMore for a small price should you choose to send it in to them.  In the end, there really is something to this counterbalancing trend that we are seeing unfold before us and it will definitely be interesting to see where it goes from here.

For more information on SeeMore’s counterbalanced line of putters, be sure to check out their website at www.seemore.com.