Today, convenience and mobility trump most everything when it comes to our day to day lives. As such, it’s no wonder that we continue to see these aspects working their way into extracurricular activities, and golf is a perfect example. The swing is clearly the most analyzed aspect of the game, and while lessons from a PGA Professional are always the safest road to improvement, the accessibility and affordability isn’t always there. This is where we have seen technology begin to provide a viable option for golfers, and Zepp as a company is trying to be a leader there through their Smart Coach training system in coordination with the Zepp 1 and Zepp 2 swing analyzers.

Zepp sent both versions of their sensors into THP for a closer look at just what they bring to the table for golfers. 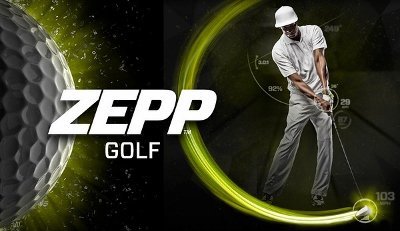 Zepp is a company of athletes. (Once an athlete, always an athlete, right?) But more specifically, we’re athletes who are driven by science and innovation. We began our journey with a simple quest: to bring meaningful data to sports. That soon expanded into a broader mission of helping athletes improve their performance, boost their confidence and reach their maximum potential. Because data alone is not enough. That’s why, at Zepp, we are committed to developing the advanced 3D visuals, actionable insights and interactive training tools needed to truly transform your game. Welcome to the future of wearable sports technology.

Measure the most important aspects of your golf swing, then analyze and improve each one. Zepp offers an incredible set of 3D and video analysis features that give you instant feedback on club position and biomechanics. You can even compare your swing to the pros. 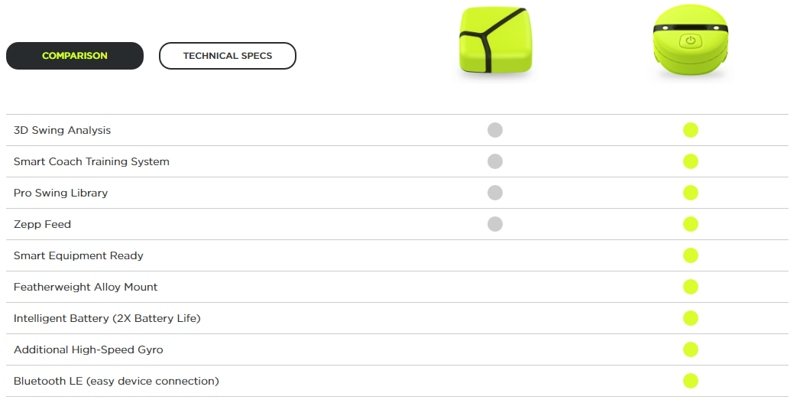 Zepp Golf Setup and Use:

When it comes to technology, ease of setup and use is always of paramount importance. While this reviewer has tested several different swing analyzers on the market, none has streamlined and simplified the setup process as much as Zepp. Most interestingly though, having literally seen the evolution of the app from Zepp 1 to Zepp 2, it can be argued that no other swing analyzer on the market is undergoing such constant evolution and tweaking, a good thing considering the rate at which we see technology change and become obsolete in our everyday lives. 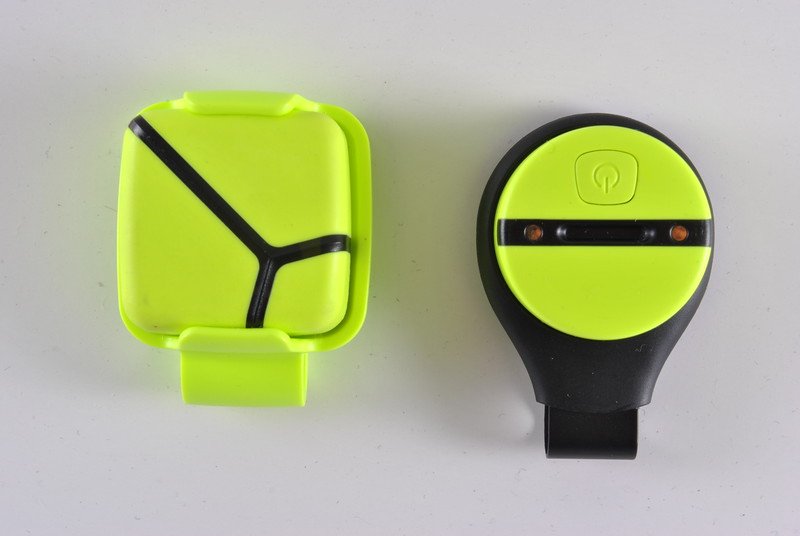 Initial setup and use is simple, after charging with the included USB cable, simply attach the mount to your glove, followed by the sensor, download the app (iOS or Android), enable Bluetooth on the device being used, and then follow the instructions within the app. Zepp has done a tremendous job of streamlining the initial account creation and getting the user right into what this device is designed for: Recording the golf swing. It is important to note that more than just being streamlined, the entire setup and use of the app in particular is aesthetically very clean and pleasing to the eye with the right combinations of accessibility, color, and graphics.

A lot of swing analyzers brought to market have been cut and dry in giving you the data and having the user do with it what they will. With each update here however, the company has implemented aspects that go beyond the swing data recorded and into how average golfers can both digest and use it to improve, it’s possibly the deepest swing analyzer app this reviewer has tested.

An interesting thing about the Zepp is that unlike most of the other swing analysis devices, it mounts to the back of the golf glove rather than on the shaft. While that may generate concerns as to the accuracy of the data it records, particularly with speed, which will be discussed in the section on data. The thing to look at here is that the calibration routine is concise and effective which should calm some fears. In fact, this reviewer intentionally altered grip position on multiple calibrations and did see changes in the swing data recorded. 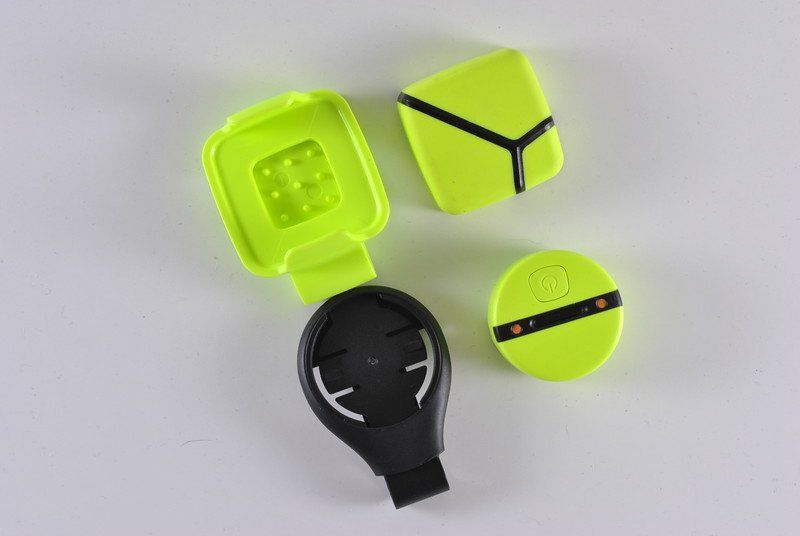 The actual recording process is simple, after syncing the sensor with the device the user selects the mode of recording they want (coaching/training options that focus in on a user’s area of need or straight forward recording mode) and the app is ready to go. Thankfully by utilizing a notification sound after each swing is recorded there is no confusion from needing to look at the screen before or after every swing. All of this is worth mentioning because it allows for going through a full practice session and combing over the data after, or looking at it swing-by-swing on the fly. 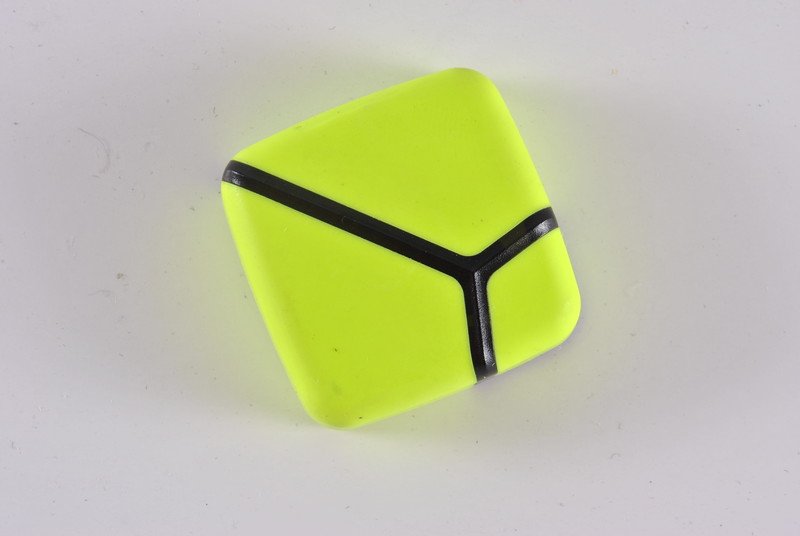 Having both the V1 and V2 sensors in hand, it is worth noting the changes that have been made in terms of the physical design. Most obvious is the shape change, with the V2 being round as opposed to square. Beyond that, the newest version has improved the battery life and testing found that it charged significantly faster while also lasting an additional two range sessions. The bracket has also been streamlined and is much less bulky which allows the Velcro on the wearer’s glove to fasten more securely. That said, it needs to be clear that physically there is nothing wrong with the Zepp 1, no glaring issues that forced the company to move to the Zepp 2, rather it is just a natural evolution of design. There is a slight difference in data recorded, but nothing that absolutely makes the original version obsolete and neither are all that noticeable through the swing. 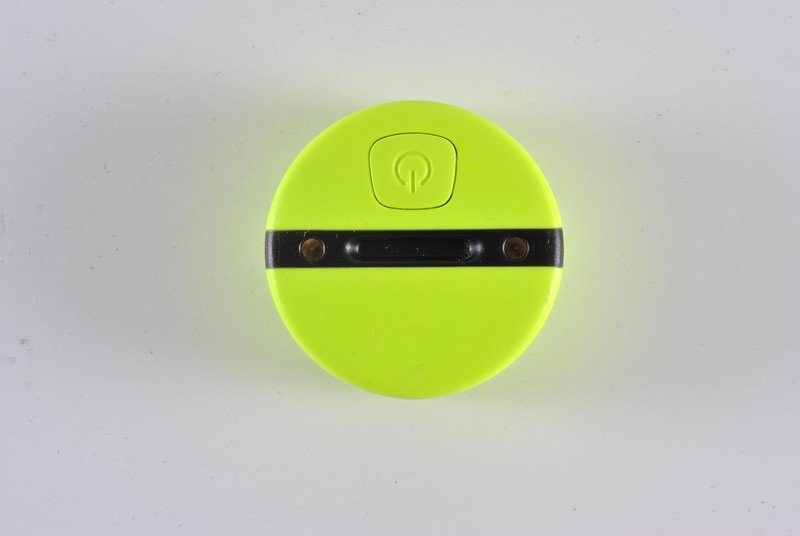 But does it work? That is an interesting topic to tackle as the immediate concern is with the device being located on the back of the user’s glove hand and not on the club itself. In terms of accuracy, there should always be some reasonable expectations set and be kept in mind that this is not a full launch monitor setup, its intent isn’t to give you ball flight data, it is to give you swing data with which one can improve their game. 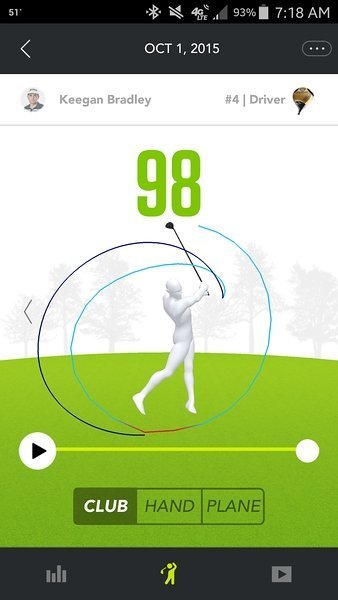 In terms of path (swing, hands, plane) the Zepp 1 and Zepp 2 give detailed data that is further broken down by the app/program. By using the accelerometer and gyroscope within the design the company has spent a lot of time tweaking the process which shows with each update of the app. The best thing is that this is not static data, as the golfer moves and manipulates the swing the changes are absolutely shown on screen. While both versions of the sensor are quite impressive as to what they record, the data with the Zepp 2 did seem a lot more sensitive, this makes sense as in this version the company has added another gyroscope to really sense the movements and intricacies of the swing. 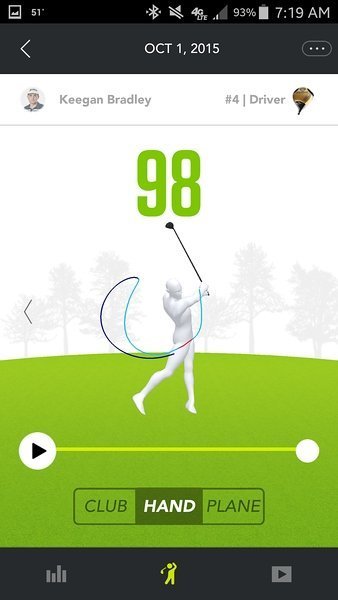 Some will want to know about the recording of club speed and its accuracy. When compared to the reviewer’s full launch monitor setup there was a 3-4 MPH spread on this data point, and honestly this should not be taken as a negative. Keep in mind, this device is located on the hand and relies on converting data processed by the accelerometers into this number, so it simply won’t be as accurate as an actual launch monitor. Again though, this device isn’t setting out to be a launch monitor, it’s a training and teaching device, so being this close was good to see. 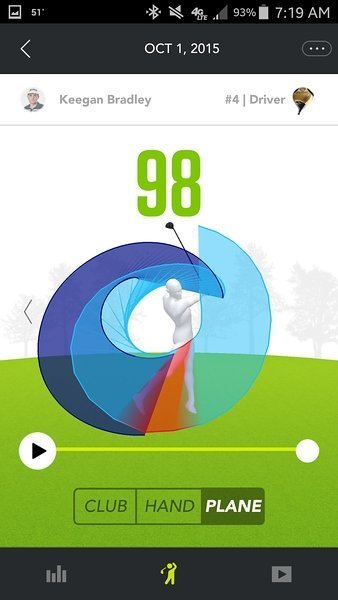 Overall the data recorded is deep but digestible, which is paramount. Having metrics like plane, hip rotation, backswing length, and tempo are great, but most golfers have zero clue as to what they mean or how they affect the swing. Luckily, as Zepp has improved the app they have included the ability to select each metric from the recorded swing and see an explanation and tip video from PGA Teaching Professionals for each one. Clearly the “goal” data is going to vary from user to user because we all have different swings, but the Zepp system has evolved exponentially and now presents understandable feedback and goals through their scoring system. No, it isn’t perfect, but the fact that they continue to work on improving the device speaks volumes to the company’s ambitions of helping golfers get better. 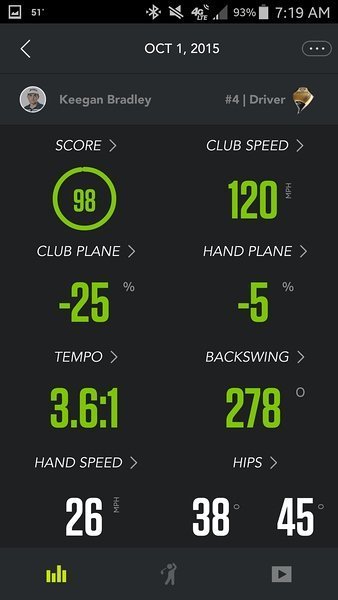 Many will look at the Zepp devices for the swing metrics, but the real “meat and potatoes” of the app is the “Smart Coach” portion. In fact, the continued evolution of this portion of the device alone altered the entire initial perception this reviewer had on Zepp. There are a few different paths that can be taken here, there is basic 3D analysis that goes swing-by-swing, the is a video option which lets the user record and mark up their swing, and there is the instant evaluation where after 3 or 10 swings the program will recommend the path that the user takes for their specific swing needs. 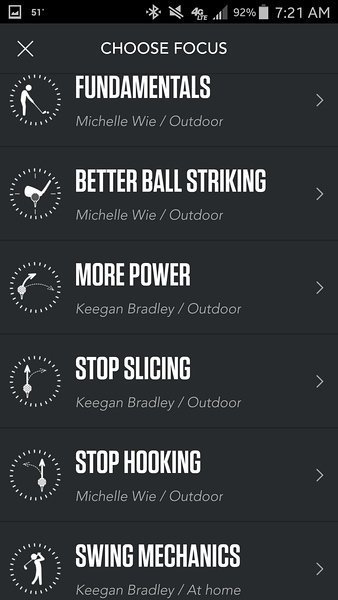 This “Smart Coach” aspect of the app where the user can either go through the aforementioned instant evaluation to have a program recommended for them or simply select it themselves is an immersive experience. The program has many areas of focus (fundamentals, ball striking, power, slicing, hooking, swing mechanics, speed training, and flexibility) that are done in coordination with Keegan Bradley or Michelle Wie as well as a PGA Teaching Professional. The nice thing is that each of these has a nice production value and offer a thorough explanation on what that realm of focus means, and a plethora of easy to digest drills.

There is a lot that could help both the experienced golfer, as well as the beginner, understand their swing better within the Zepp Golf setup. While apps and devices will not replace the importance of an in person lesson with a PGA Professional nor will it provide the flight data of a launch monitor, they can supplement them. Zepp has done a great job of making necessary changes to improve the performance of their devices.  The app itself has gone from acceptable to one of the more complete options this reviewer has spent time with. Better yet, although the accuracy and sensitivity has improved with the Zepp 2, those who have or acquire the original model will still be able to access the same deep capabilities with plenty of performance. It really will be interesting to see where the company goes from here in future updates.

The Zepp 1 can be purchased for $99.99 while the Zepp 2 is available for $149.99, more information on heir golf program as well as the other sports their sensors work with can be found at www.Zepp.com.