3Bays, makers of the GSA PRO swing analyzer, have added a putting analyzer, called the GSA PUTT, to their stable of products. This device is designed to work in conjunction with an iPhone app via Bluetooth connection, giving instant feedback on the user’s putting stroke. I’ve been testing the GSA PUTT for a little over a month now and will be sharing my findings in this review.

Description, Set Up, and Technical Specs 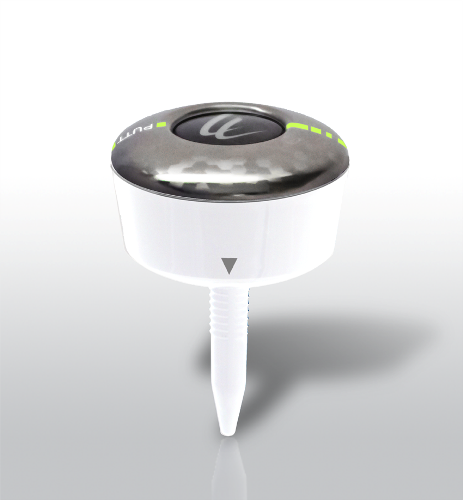 The GSA PUTT device is small in size and remarkably lightweight. The benefit of the device being so small and light is that it isn’t noticeable during use, other than the fact that you can see it. That may seem like a small issue, but after trying another putting analyzer that attaches the entire phone to the putter shaft, there is a big difference. The weight and balance of the putter remained unchanged while using the GSA PUTT, and I do think that’s important if you are looking for a truly accurate representation of your on-course putting stroke.

Set up is quite simple, though it does take a few minutes. The first step is downloading the app from Apple’s App Store.. The app is free to download, but does require a product key that is located on the bottom of the device. After that, it’s just a matter of following some simple instructions to connect the GSA PUTT to your phone via a Bluetooth connection.  The device inserts into the hole at the top of your putter’s grip and alignment is as simple as matching the small arrow on the GSA PUTT to the line at the butt of the grip

The GSA PUTT is only compatible with iOS devices at this time. You can see the rest of the technical specifications below.

After establishing the Bluetooth connection, using the GSA PUTT is extremely simple. To record a putt, you simply address the ball, wait a second, and make your stroke. The device instantly starts transmitting data to your phone after impact. The GSA PUTT does require actual impact to register, so you can still take practice strokes if that’s part of your routine.

It should be noted that you’ll want to keep your iPhone nearby and maintain an unobstructed view. If not, the data from your putt will not transmit to the phone successfully. I typically placed the phone on the ground within a few feet of the golf ball while practicing and paid no attention to it until I wanted to see the data.

After taking some putts, you can easily flip between them within the app, similar to the way you navigate a picture gallery. You have the option between seeing the data that was recorded or an animated replay of each putt from either an overhead or side view. If you see (or remember) some putts that were particularly good, you can mark them as favorites to use for future comparisons by tapping the star icon at the bottom of the screen.

If you want to go back to look at previous practice sessions, you can do so by tapping the icon that looks like a clock. All of your sessions are archived and organized for easy retrieval.

The GSA PUTT tracks eight metrics and presents them along with an animated replay of each putt that you take. You can play the replay back at three different speeds.

Putting Data to Use 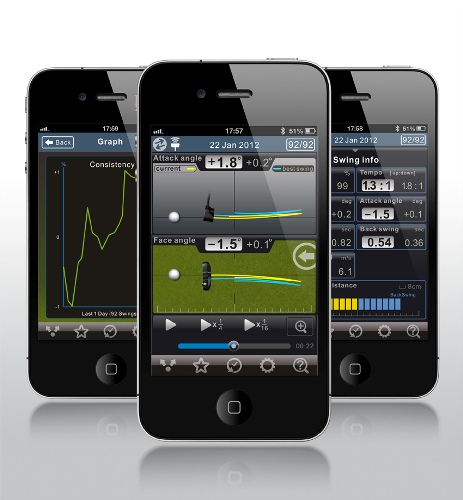 So, what do all these metrics mean to the average golfer? That’s a good question, and one that I think brings up a good point. Having all this information at your fingertips, but lacking the knowledge to decipher it, could be an issue for some people. I was quite aware of what each metric meant, but I wasn’t exactly sure what was ‘good’ for every one of them.

Take Attack Angle for instance. The concept is quite simple, yet I wasn’t knowledgeable enough to know if the results I saw were in an acceptable window. Fortunately, I was able to reach out to a putting instructor for some reassurance. Still, that option isn’t necessarily on the table for every golfer, so it would be nice to see some sort of guide from the company inside the app or on the web to compliment the data provided. Something like face angle is quite self-explanatory, but the same can’t necessarily be said of every measurement available in the app.

The consistency metric was possibly the most interesting to me. The basic premise is that you select a putt (or many) as your ideal stroke(s) to compare against. Then, the app gives you feedback on how well you mirrored that stroke in a number displayed as a percentage. On top of that, you can see how each stroke stacks up visually by comparing the blue and green lines that are created in the animated playback of your putt. 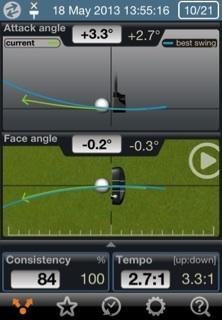 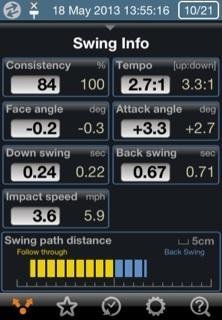 I think this is a helpful tool, especially when it comes to seeing the visual representations that are provided. However, there are some limitations to this metric that I think are worth mentioning. Consistency takes all the other data points into account, so comparing your short putts and long putts will not show a completely favorable result, even if your stroke is essentially the same in path and tempo. This wouldn’t be so much of an issue if there was any easy way to designate putts by length, but I didn’t see a quick way to do that during testing.

By tapping each metric, a graph is displayed that shows your performance over time. Again, this is more useful with certain data than others. For example, seeing a consistent trend in the Face Angle category is much more important than in Impact Speed.

Lastly, the GSA PUTT app enables the user to compare their performance versus a professional. I will note that the website advertises this differently than what the app actually contains. The website reads, “GSA PUTT app preloads reference strokes of different distances by PGA/LPGA pros. You can view their strokes and see how you stack up against them. It feels like carrying a virtual putting coach around with you anywhere, anytime.” However, what is actually available is a sampling of putts from one PGA teaching professional. My perception was that there would be multiple strokes from different professionals, so this was a bit of a disappointment. I hope that feature is upgraded with future updates to the app.

The last two suggestions I have for the GSA PUTT are related to instruction and fitting. I briefly touched on this earlier, but I think a great addition to the product would be some putting tips related to flaws that are discovered while using the device. In addition, a general guide with putter styles that match individual strokes would be very beneficial to just about every user.

If you want data about your putting stroke, the GSA PUTT offers boatloads. Some people may find the information presented confusing, but it could be a great tool for putting instructors, fitters, and educated amateurs.  The inclusion of animated replays of each putt definitely adds a great deal of value, especially if you are struggling with the path of your stroke. It provides almost instant visual feedback. Pleasingly, I can say that I saw nothing that made me question the accuracy of the data I was provided during testing. One of the least noticeable, but very important, features is the fact that the device has very little impact on the way the putter feels and looks in your hand.

I see a great deal of potential with the GSA PUTT, though I think the app could use a little refining, especially when considering the capability of the device itself. Including some feedback on what constitutes ‘good’ performance would be very helpful, especially for the less knowledgeable among us. Also, putting tips for those looking for them would be a great addition, as would a larger variety of professional putting strokes to compare against.

The GSA PUTT has a MSRP of $199.99 and can be ordered on the company’s website at www.3bayslife.com.