This year marks the beginning of a concentrated push by Bridgestone Golf to really establish a foothold in the equipment sector and expand into offering something for golfers in all spectrums of needs. The J815 is a prime example of just that – it’s billed as the more forgiving and higher launching offering “for professionals to high handicappers” opposite the J715, which is definitely a departure from what we saw with the low launch, low spin J40. 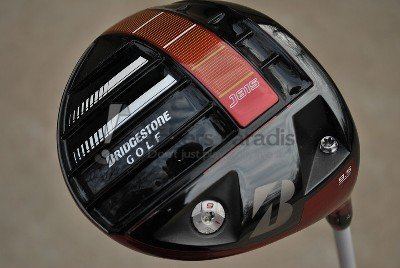 Information on the J815 driver from Bridgestone Golf:

The J815 features some tech designs that Bridgestone implemented with the focus on increasing launch while keeping spin at a manageable level for a wide range of users, rather than just a setup for those golfers looking for low launch and low spin. Namely, the F.A.S.T. (Fast Action Speed Technology) crown and Power Rib sole exist with the goal of allowing the crown to flex more, increasing the building and transfer of energy to the golf ball with aims of producing higher launch angles and ball speeds. Additionally, the eye catching “Power Milled” face seeks to prevent any sliding of the golf ball up the face thanks to the mini grooves milled into the impact area. This means less spin and spin axis tilt, which should lead to the potential for improved distance for users.

It is an understatement to say that we have never seen something quite like the J815 driver out of Bridgestone to this point. Aesthetically speaking, ‘departure’ just isn’t a big enough word. As soon as the news was dropped that we would be seeing the J815 model here stateside all focus immediately went to the bright red and in-your-face crown graphics. 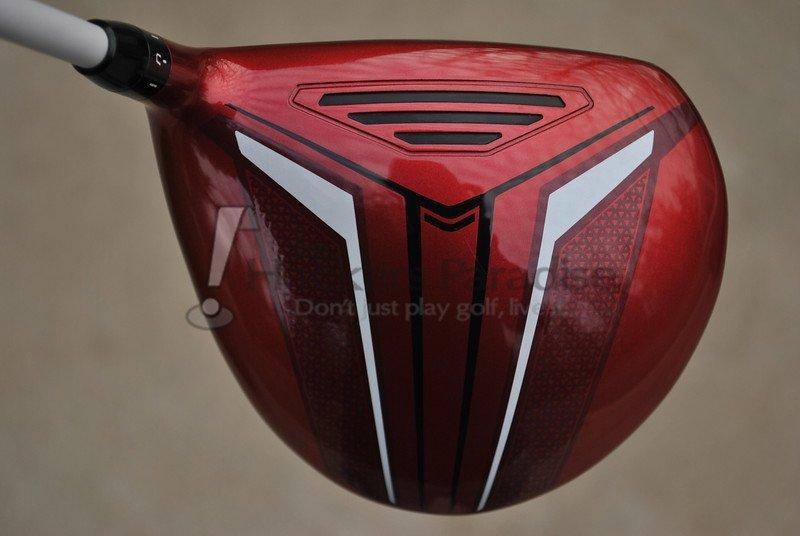 Graphics and crown design features have been done on a lot of drivers in recent times, but nothing quite like this. Immediately the flashy crown of the J815 sticks out to the eye, and frankly the graphics make the bright red paint seem a bit tame in comparison. After getting over the initial focus on the paint, the other noticeable feature on the head is the F.A.S.T. (Flex Action Speed Technology) compression section at the leading edge of the crown. Honestly, the compression feature is one of the better looking ones we have seen.  The cap on that section really is reminiscent of louvers on the rear window of the old muscle cars, a fitting feature given the flash of the head. 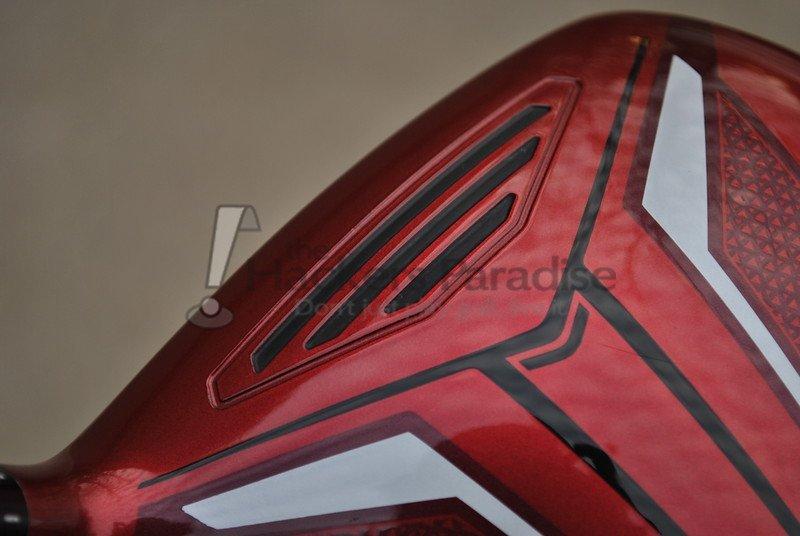 Fact of the matter is the color and graphics are going to be the focal point of discussion on this head regardless of the performance. For many, it has been easy to get over after seeing what it can do on the course, others sadly will likely struggle allowing themselves to give it a fair chance. Obviously, there is a desire by many to have Bridgestone release the all black version stateside, but the company has said there are no plans for that, which is surprising as it really seems to fit the North American demographics better. So, it is necessary to point out that while yes it is different, it is causing talk and that is good for Bridgestone. Beyond that, all of the angles of both the graphics and the F.A.S.T. section really could serve as a solid alignment mechanism if allowed. For this reviewer it is no different than another company using racing stripes – different, but effective. 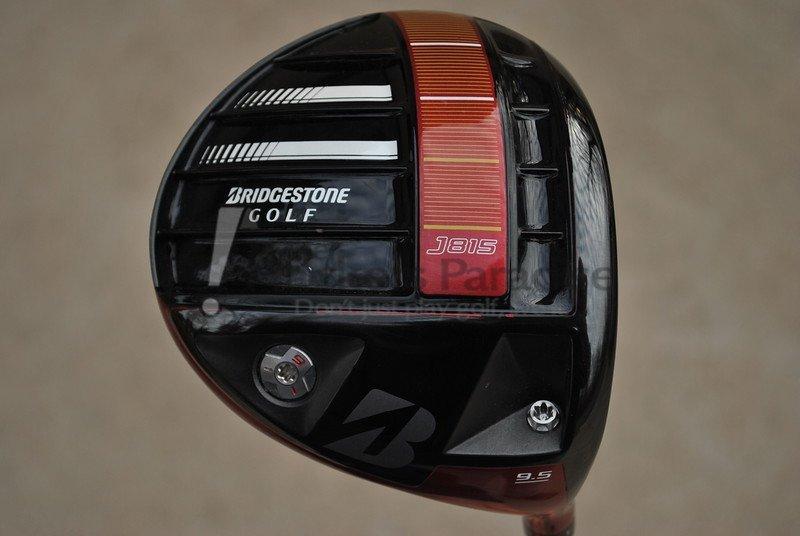 The remainder of the head is by no means aesthetically simple however. Immediately noticeable is the “Power Milled” face that is unlike anything we have seen before. It is intent on decreasing spin (more on that later though), but most of all it is unique and yet another eye catching talking point. The club is finished out with a “Power Rib Sole” that increases structural stability in the head and a single rear adjustable weight port. The black finish with red accent on the sole is incredibly sleek, and can’t help but make one think how good the head would look finished completely in that classic Bridgestone black. 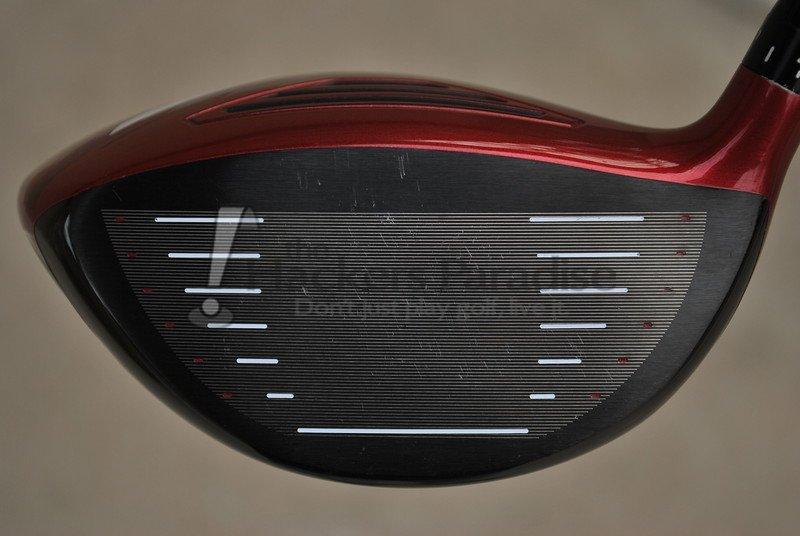 In the end, the headshape itself is one of the best this reviewer has gotten hands on in some time. It’s just got a great flow to how it sets up. The club frames the ball insanely well and the face depth adds to the confidence behind the ball. It’s a 460cc head that is not at all cumbersome in size and behind the ball will appeal to many if they can get beyond the graphics. It is just such a good shape.

THP was able to spend some in depth time working with the J815 driver in 9.5° paired with the standard Mitsubishi Fubuki ZT shaft.

Having spent time with both the J715 and now the J815 it came as a surprise just how good this head sounds at impact – significantly better than the J715 in the opinion of this reviewer. The head definitely carries with it a metallic based sound, but there is no tininess or hollowness to it. Rather, there is a muted dense trait to the resonance upon impact. It is no exaggeration to call it one of the best sounding drivers out there – high praise given the emphasis so many companies are placing on acoustics as of late. Addicting is a very good descriptor here. 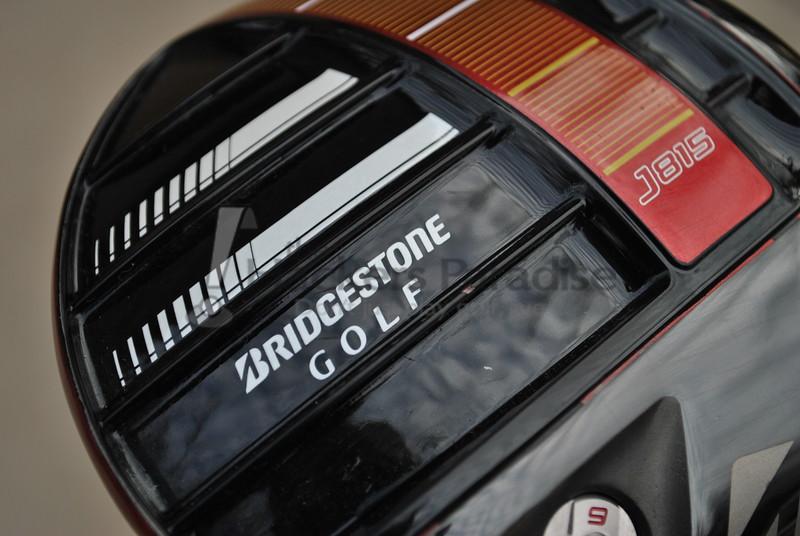 The head really gives the sensation of the ball jumping off the face, which is something many look for in a driver. There is no dead feeling here. Additionally, contact across the face is recognizable and the head shows great stability on misses and center strikes alike, even with the emphasis on the crown deformation/flexing at impact. Overall, it is a pleasant sounding/feeling head and those who look beyond the aesthetic nature of the head will likely be surprised in the sound/feel area of performance. 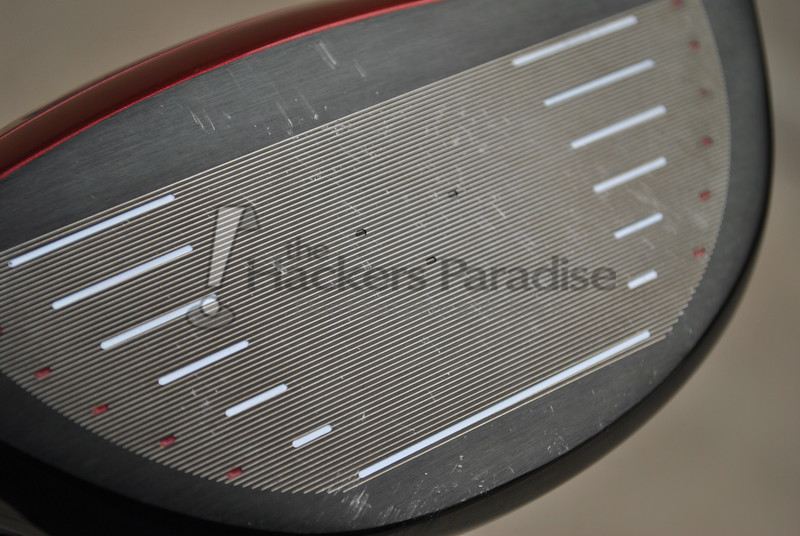 From the first swing during testing with the J815 driver the ball-flight and overall launch of the head jumped out immediately, particularly given the preconceived notions of what type of flight would be seen out of the 9.5° loft. The J815 launched a good deal higher than anticipated, especially given the history of the brand with drivers like the J33R and J40 being two of the lowest launchers this user has ever put a swing on. The overall ball flight fell firmly into upper end of the mid-high range and the spin seen for this reviewer is what would be classified as a low-mid ratio. Immediately these two factors differentiate the J815 as the first Bridgestone driver for “the rest of us” who benefit from more launch and more spin, which is exciting to see as this is the largest margin of golfers out there. 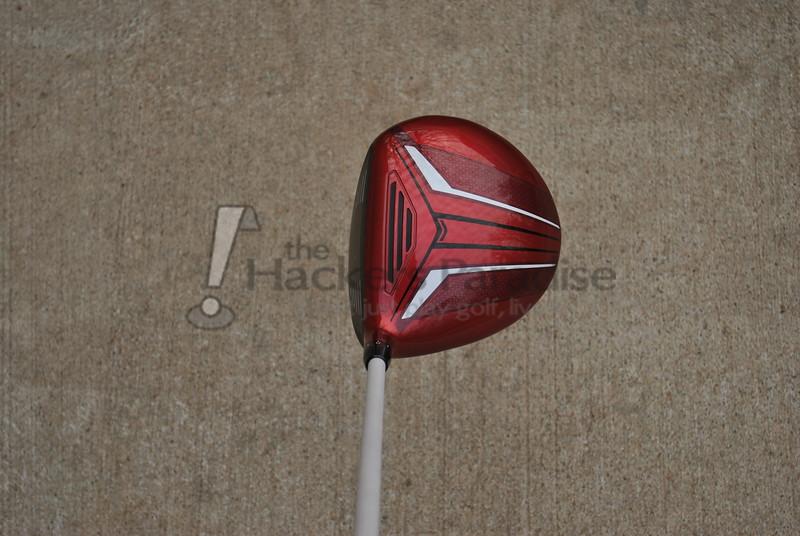 The head is paired with the Fubuki ZT shaft and all testing indicated it to be a well-rounded fit for the club head and its performance baselines. The ball flight seen was penetrating from launch to apex and kept a good descent angle rather than simply falling out of the sky. The ball-flight is workable for those who really want that in their tee game, though obviously given the profile and emphasis on forgiveness the degree at which this can be turned will be lessened compared to heads like its sibling the J715. 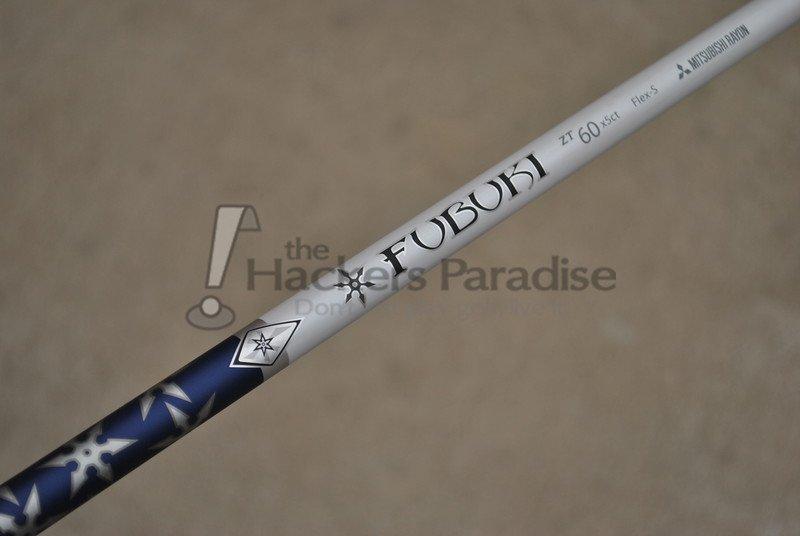 Another point of emphasis here needs to be on the face angle. Bridgestone lists the J815 as being ½° closed at address, however the graphics on the crown really seemed to give the illusion of more than that thanks to their emphasis on alignment to target and this was mentioned by multiple additional users who spent time with the J815. The head is adjustable for face angle to an extent because of the “Variable Adjust System”, but thanks to the closed starting angle adjustments resulted in a more closed face or one that was a bit closer to neutral (loft and lie will also be affected with adjustments). With this, it’s no surprise that testing showed the ball flight having more of a propensity to work left for the reviewer. That isn’t to say that you can’t fade the ball with the club, as that was not an issue, but the amount at which the ball could move that way was lesser than a neutral to open faced driver. 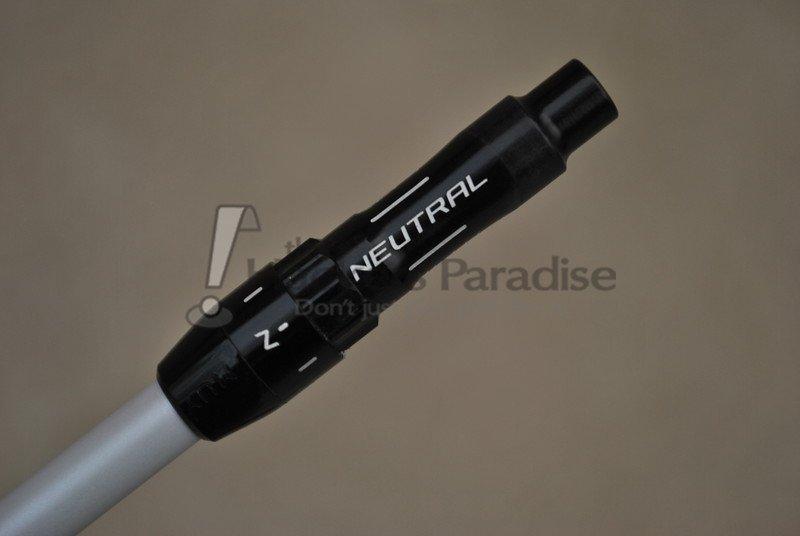 Given the launch, spin, and low/deep CG from the Bridgestone J815 it isn’t really a surprise that it showed solid forgiveness during testing. When tracking ball speeds across the face the J815 showed the best numbers vertically, with a really nice ratio on misses higher on the face. Laterally, the head was solid with ball speed retention one would expect in such a design. Overall, when it comes to the “forgiveness” moniker it is a massive departure from the J40. The club showed about a 4 MPH ball speed drop-off on misses, which wound up with an averaged 12 yard loss from center strikes – solid numbers in the grand scheme of things. The shining factor here though is the resistance to twisting of the design. The gear effect is in check like you hope to see out of a head of this profile. Additionally, the fact that Bridgestone went with a 45” stock length really helps makes the club much more manageable for amateurs. It is incredibly nice to see someone bucking the trend of making their drivers longer and longer in playing length. 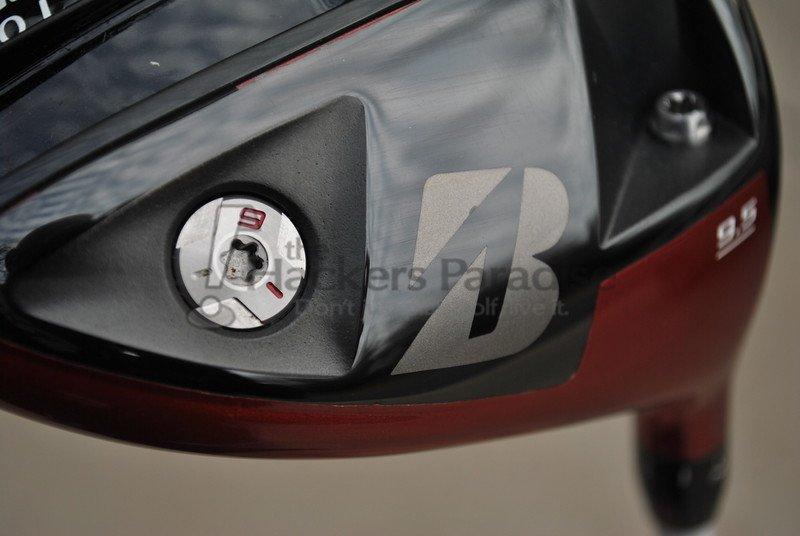 As we know, distance seen from any club is going to depend a good bit on how it fits the needs of the golfer. For this reviewer the spin/launch traits work well and lead to the J815 producing a good bit more distance than expected. In fact, it compared well with some of the top heads released this year. As mentioned though, distance with a driver in particular is difficult to define in any finite manner because of fit, but it is no stretch saying that a large section of golfers would have no issues achieving good numbers for them with a proper fitting.

The J815 is going to be a driver with two different focal points for people. The first will be those who stay hung on the graphics as they make an incredible shaped head very busy to the eye and possibly too different for many, which is understandable. The second will be those that hit the club and weigh the performance, finding a head that is well rounded in spin, launch, ball-speed retention, and essentially the first driver offering from Bridgestone “for the rest of us”. The question will come down to who can get over the first to discover the second, all the more reason many will keep hoping for the release of the all black version.  In the end though, the fact that Bridgestone is expanding their offerings to cover the needs of golfers across the gamut is a good thing for consumers. Some may claim otherwise, but options are good for us all.

The Bridgestone J815 driver comes with an MSRP of $399.00. More info on it and the rest of the 815 line can be found at www.bridgestonegolf.com.